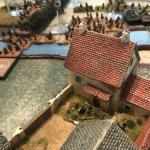 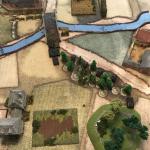 Having seen off the battered remnants of a Soviet Motor Rifle Regiment, the Welsh took up positions to the northeast of Glissen and laid minefields and dug in to await the inevitable tank horde. Suddenly jets screamed over the town and the loud thump of helicopters became a deafening roar.

"Lieutenant Llewellyn, wake up those buggers in the Rapier battery. We're going to need them." 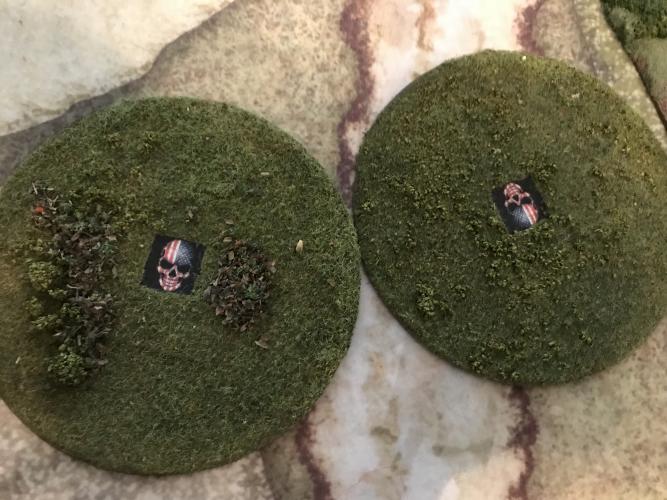 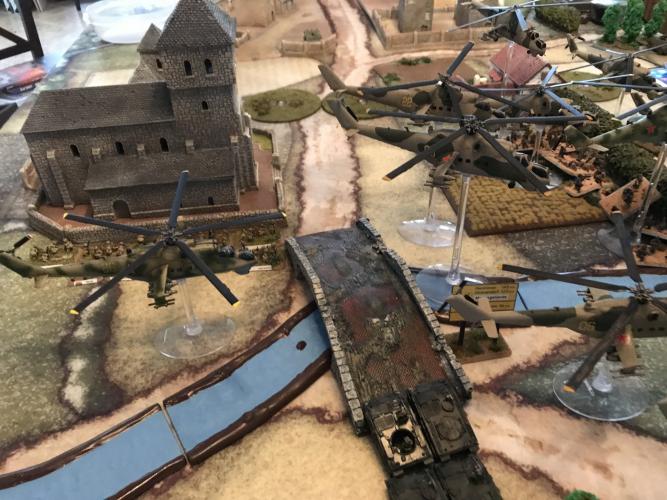 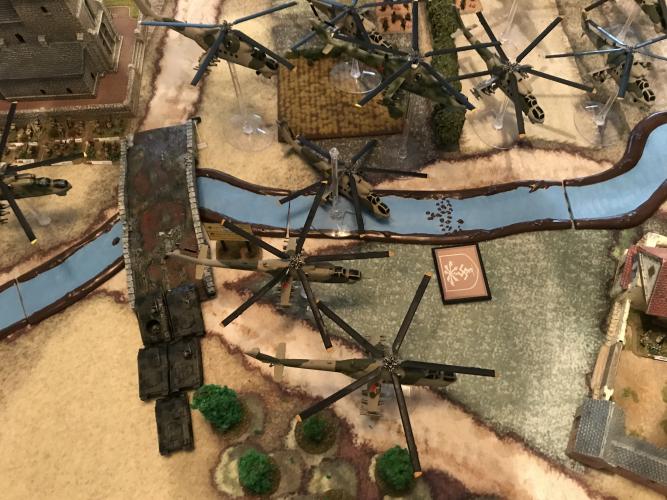 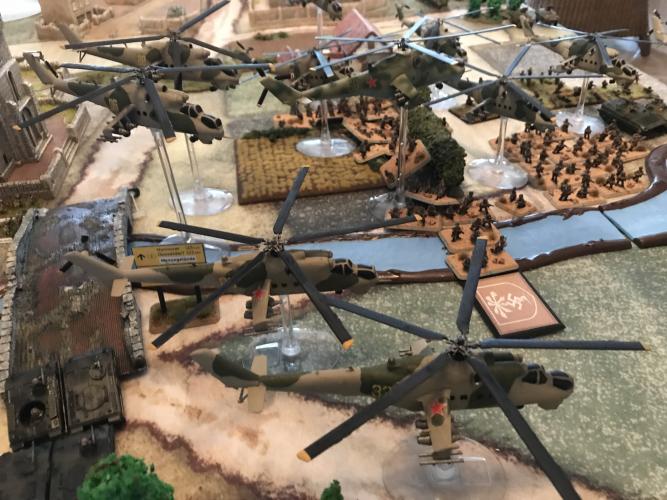 On turn one the Poles dismounted their troops north of the Welsh positions to approach on foot. The BMP recon company moved toward the Welsh Milan platoon holding a farmhouse on the Welsh right. They were the only troops guarding this objective. The Poles had chosen their schwerpunkt well. They would be bringing two full air landing companies to bear on four Milans, two attached GPMG bases and the CO.

To further lengthen the odds they ordered both Hind companies to pummel the farmhouse, the rocket battery to target the farmhouse and the Frogfoots to hammer it as well.

The only saving grace for the Welsh Command Post was that although dawn had already broken, the men were dug in and concealed. The Poles brought a hell storm of metal onto the Welsh positions. Only the rockets failed to range in.

Although stunned and partially deaf, the Welsh survived with no casualties. To escape only being pinned, they considered themselves blessed.

Though disappointed not to have caused casualties, the Poles contented themselves that lead elements of both air landing companies were across the stream and already contesting the Welsh' right objective. The farm house was wreathed in smoke and dust. Small tongues of flame licked at wrecked outbuildings. All in all the plan was progressing nicely. 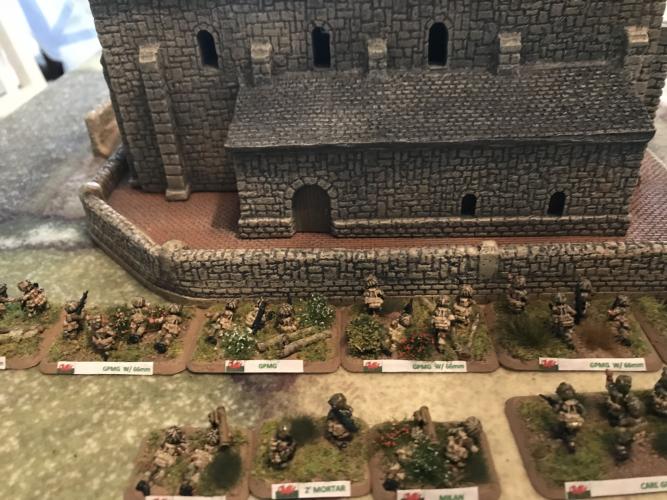 Caught flat footed and out of position, the 1st platoon moves into the cathedral grounds on the left flank.

Lieutenant Rhys assumed command. He radioed battalion and demanded immediate reinforcements. Nothing came. 1st platoon couldn't believe their eyes. The CP was a smoking ruin and Polish paras were pouring across the creek heading directly for it. The "Old Man" was a goner for sure. But the Welsh would bring some hell of their own into the flank of the Poles. Their fire was indeed withering. Their transports added the fire from their MG's as well. All the while, the Hinds roamed over the battlefield tearing great gouges of earth with each strafing run.

2nd platoon leaves its position in the left hand farm complex and runs all out toward the treeline overlooking the creek and the smoking CP. But would they get there in time? It was looking like a rout in the making.

The Soviets had missed something though. Their reconnaissance had failed to note the Rapier battery deployed on the wooded hill to the south. Tarps were pulled back. Missiles streaked into the sky. First one and then a second Hind exploded in spectacular fire balls. The shocked Soviet pilots pulled hard on their joysticks, lurching first left and then right to avoid the incoming fire. They were well trained but two more Hinds went down from well aimed Milans fired from the smoking CP. This was the first indication of life from the Old Man. The second would come when he led a forlorn hope, consisting of a single GPMG team out of the farm to contest the objective in the teeth of the Polish advance. The game would go on at least one more turn. 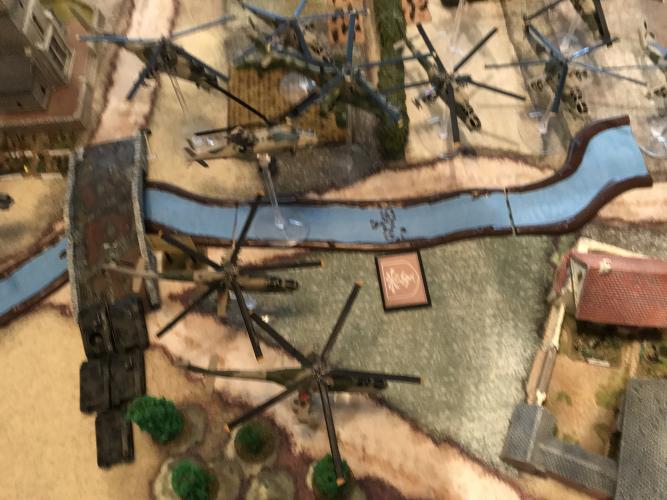 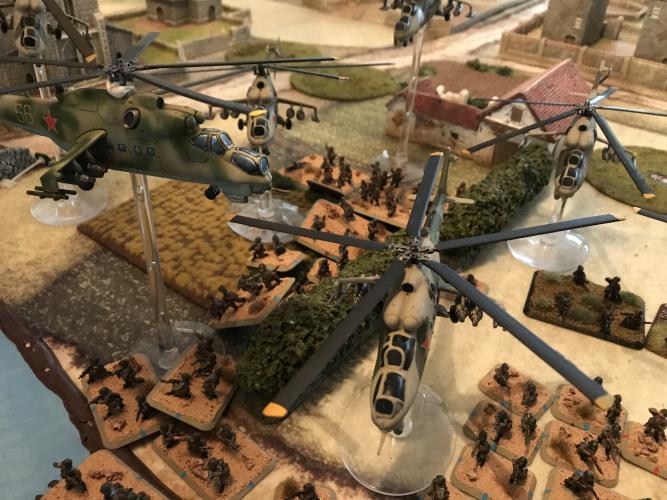 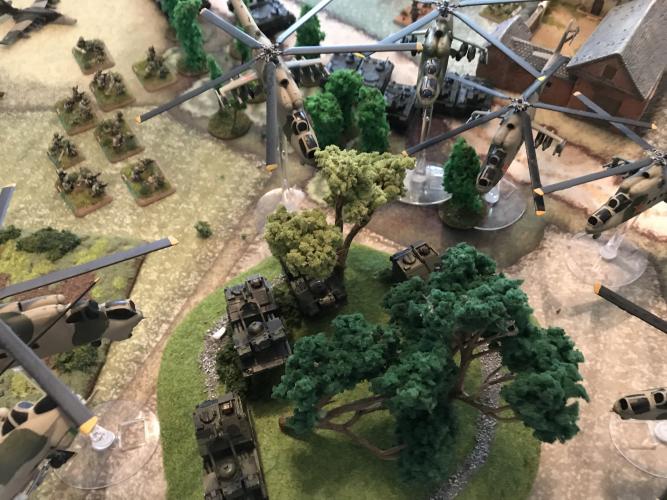 The Hinds turn from the smoking CP and head directly towards the Rapier battery. It has to be destroyed.

Neither air landing platoon unpinned from the effects of the massed machine guns raking them from the front and both flanks. They simply went to ground in the depression created by the creek. To raise one's head was to die in a hail of fire.

The rockets ranged in on the cathedral in an attempt to suppress the fire from the Welsh 1st platoon into the flank of the men in the creek. They pinned the Welsh but killed no one.

The SU 25's conducted a picture perfect strafing run on the men of the 2nd platoon as they ran for the tree line. Four bases were lost to the aircraft.

The Hinds swarmed the Rapier battery like so many homicidal wasps. The Rapiers took down only two more Hinds and then it was the turn of the 'wasps'. They whiffed.....nothing. This would be the turning point.

The BMP recon platoon fires into the smoking rubble of the CP but cause no casualties. The pinned Polish airborne fire as well and get hits, but not enough to pin the men inside and kill no one. 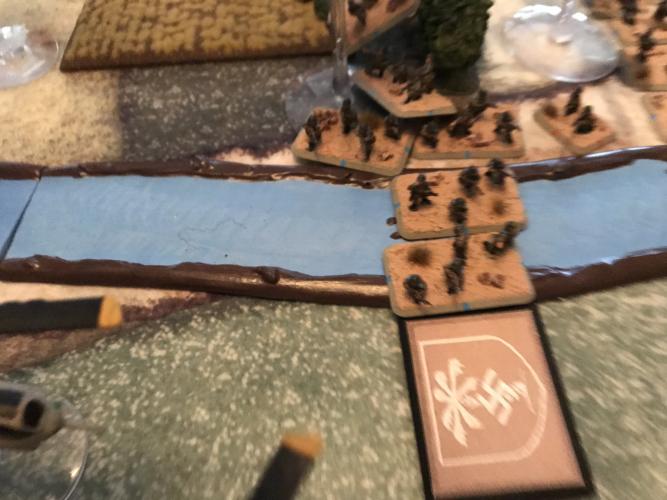 The Welsh concentrate on the tenacious Poles. They will have to be driven off. 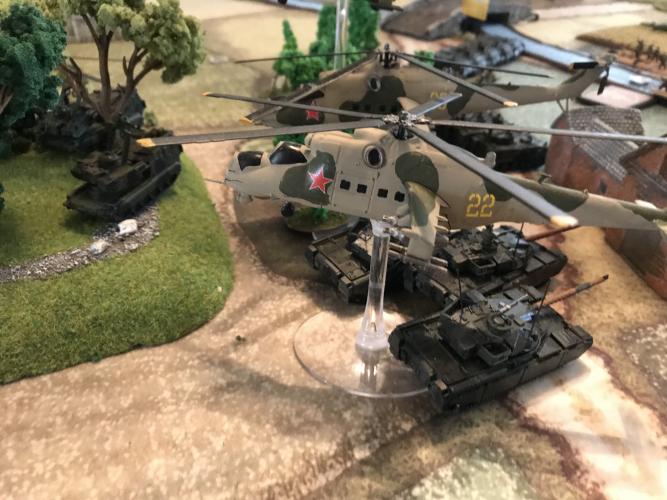 Reinforcements arrive in the form of a troop of Chieftains and a troop of Scimitars.

1st Platoon unpins. Lieutenant Rhys then leads two AT teams to the far wall of the cathedral grounds and a lucky shot brews up the OP. The lead teams of the also unpinned 2nd platoon move through the tree line and add their firepower to both FV 432 platoons and the two GPMG teams in the CP. The Poles are dying in droves. One airborne company is down to only three bases and the second is down to 7 bases.

The Scimitars fire on the BMP recon and kill one and bail two. The Recon fails their morale. The first platoon loss for either side.

Taking advantage of the Hinds' preoccupations with their nemesis, the Chieftains literally run under them in an effort to get to the creek as quickly as possible.

Although the Rapiers couldn't fire this turn, the Milans did and claim 3 more Hinds. Burning aircraft wreckage litters the once green fields. 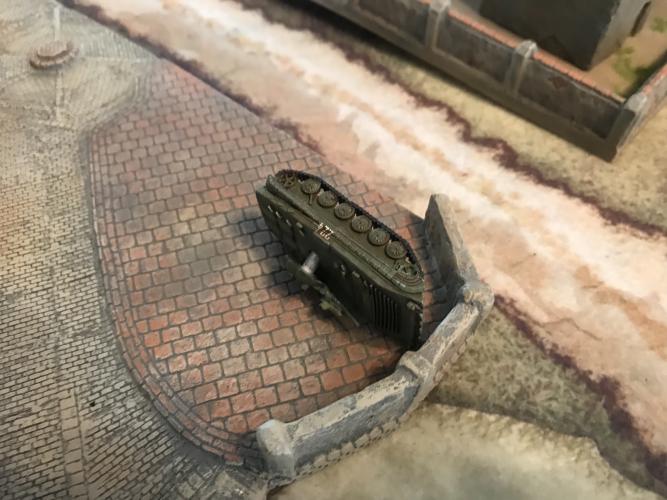 If they get out of this, Lt. Rhys assures his Charley G gunner it will be his shout. 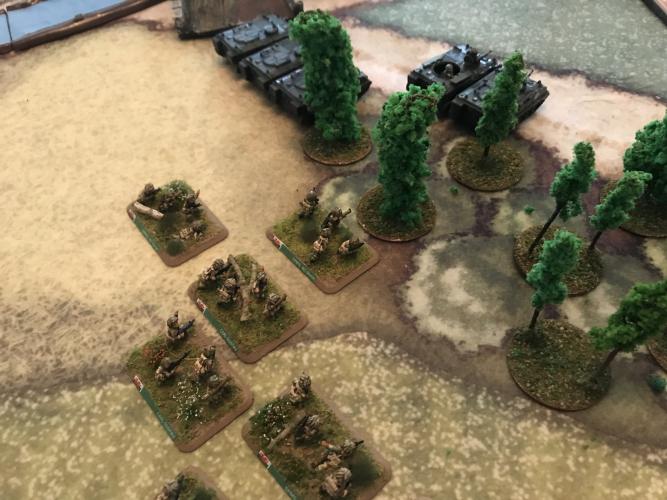 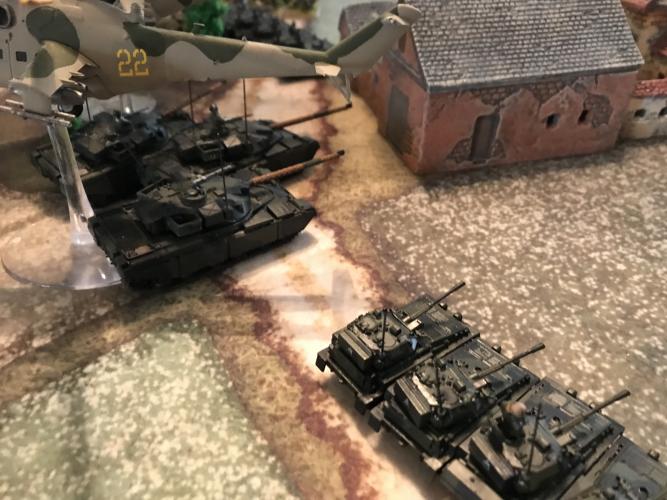 The remaining Hinds decide to leave the plucky Rapiers alone and turn to attack the Chieftains moving toward their pinned comrades in the creekbed. 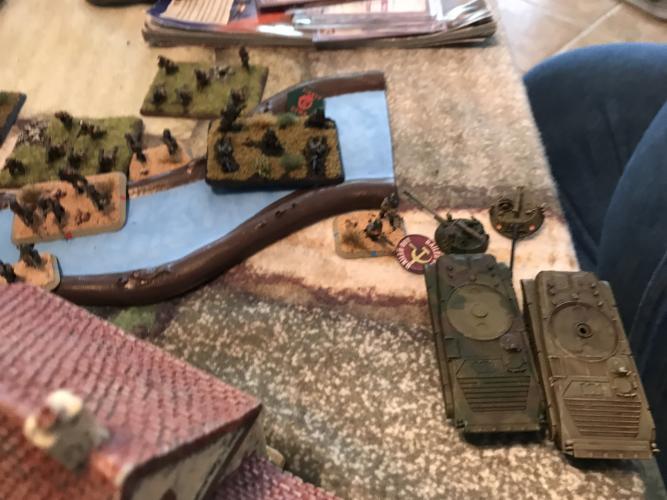 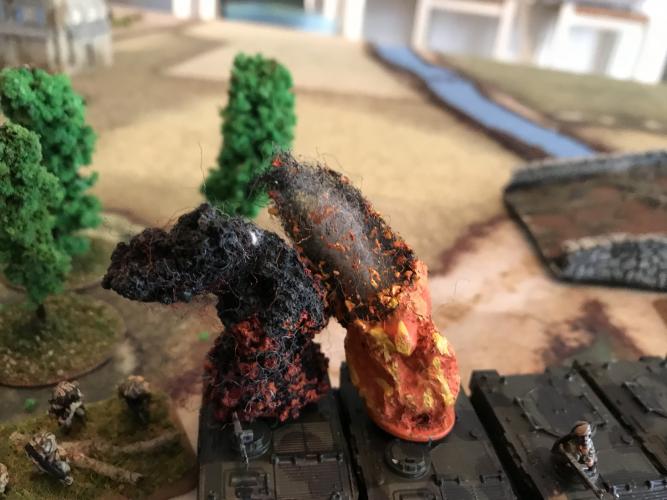 Although we didn't know it when it began, this would turn out to be the final turn.

The remaining Hinds flew in behind the Chieftains and bailed two of them. The third would decided he'd had enough and withdraw. Well, he's English, not Welsh you know. British down one platoon.

The two greatly reduced but still lethal Polish airborne platoons BOTH fail to unpin and then BOTH again fail to dig in. They do however manage to destroy two of the FV 432's which have been destroying so many of their comrades.

At this point the SU 25's begin their attack run on the FV 432's and the reduced 2nd platoon which are stacked in cheek by jowl in preparation for an assault on the Polish infantry.

But they are preempted by the Rapier battery which score eight hits, downing all four aircraft. The Polish commanders have had enough. They recall the remaining Hinds and the BM 21 battery hastily withdraws. The poor bloody Polish infantry throw down their weapons and crawl abjectly from the charnel house of the creek bed.

At this point the Welsh commander and his men emerged from the smoking CP. Being of a literary bent, the young Lieutenant Rhys thought it a scene reminiscent of Dante's inferno.

His men though, looking at the soot blackened face and bone weary expression of the Old Man, saw in him the faces of their fathers and their fathers before them as they emerged from the pits at day's end.