Taking Over for RCT Benning

Having seen off a Soviet armored unit with minimal losses, the Welsh Guards continued to Schönebeck where Aktienstrasse joins the A 430 and relieved a tired but rough looking unit of American Armored Cavalry. They deserved a rest. The Welsh promptly dug in to await the Soviet assault the Americans warned them would come. 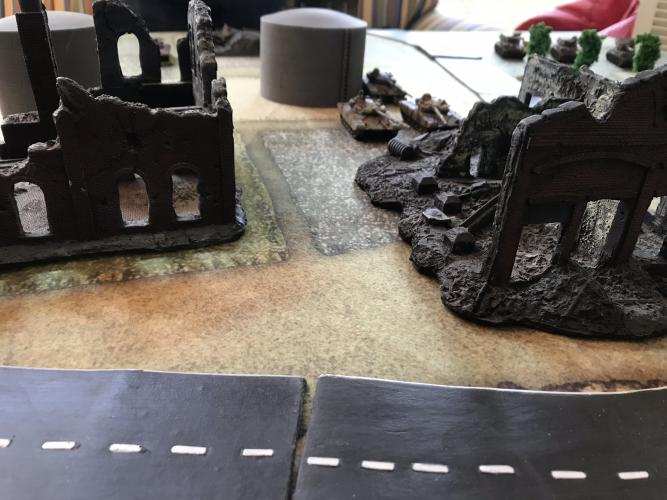 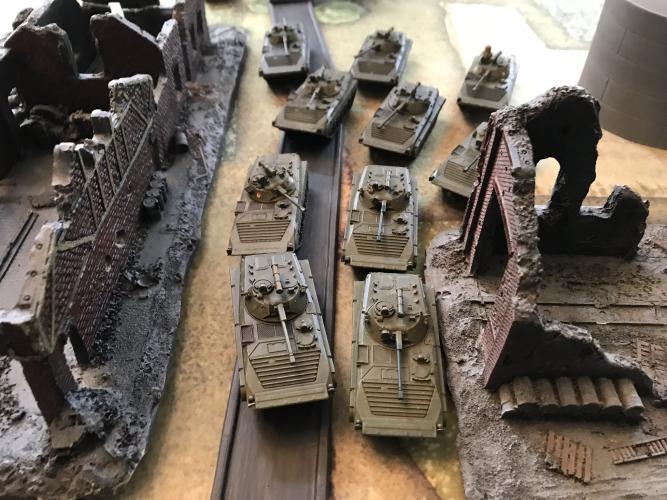 The deep rumble of Soviet diesels sent the Welsh tea mugs clattering to the ground. Sealonov was coming down Aktienstrasse like the devil himself was chasing him. No finesse for this Soviet commander. He wanted to finally remove the damned Americans and re-open the Autobahn for his divisional support elements. He sent a full Motor Rifle Company in BMP 2's down his right flank, a T-64 company up the middle and a recon unit screened his left flank. A battery of Acacia covered his objective behind a wood line on his left rear. 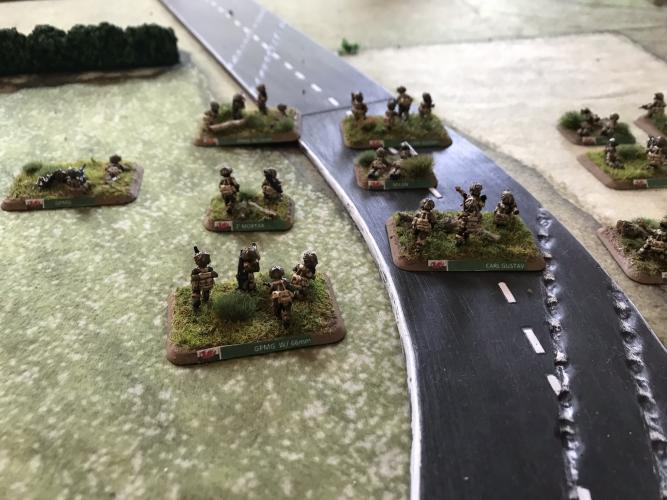 The 1st platoon dug in on the left objective in a copse of woods while their two Milans occupied an adjacent machine shop and sighted down the main road. The Milan platoon moved into the second story of run down hostel and the 2nd platoon left their foxholes and made a mad dash for the same hostel, having seen the direction of the Soviet thrust.

The Scimitars, which would achieve great fame this day, sprang from ambush and destroyed the Soviet recce platoon screening the advance. It was over in the blink of an eye. 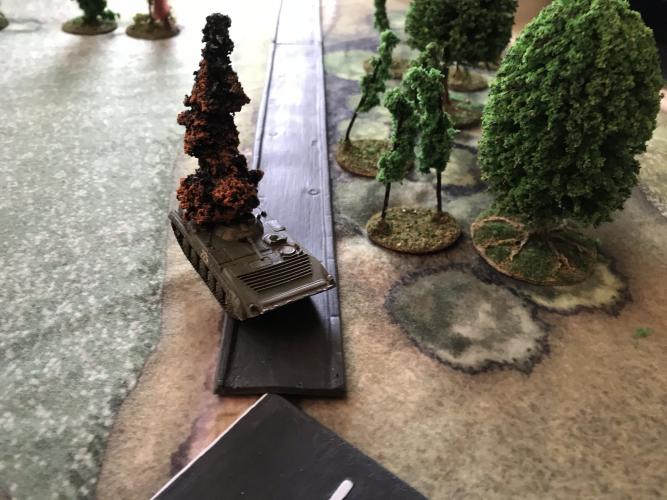 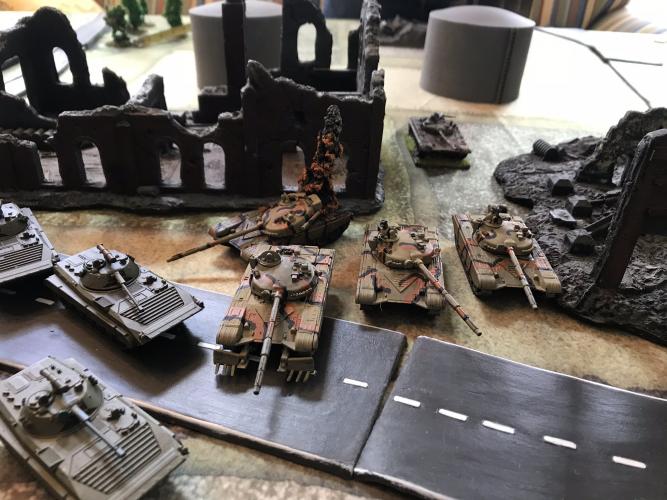 Not overly concerned by the loss of of his recce screen, Sealanov pushed with single minded fury towards the NATO positions. It was becoming clear from the volume of fire the Americans either been reinforced or replaced. Not a good sign for an area supposedly free of effective NATO units.

He ordered the BMP company to advance to the very door of the hostel before disembarking the troops. He wanted to be under the effective Milan range to lessen his losses. 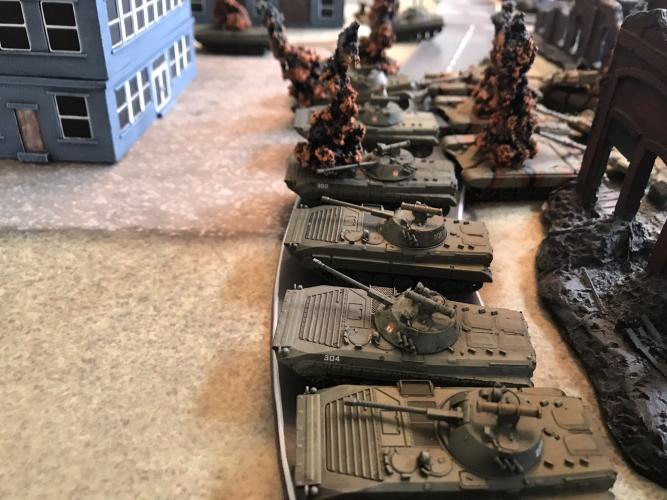 Sealonov's ruthless push to close resulted a heavy losses to his BMP's and their personnel from Charlie G's and 66mm fire.

On the right flank, the Scimitars pushed into the tree line protecting the Acacia artillery battery. They were already looking to put an end to the shelling their compatriots were enduring. 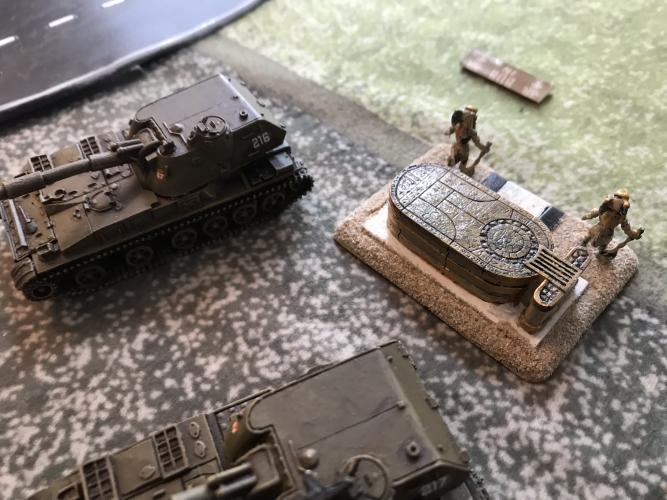 Sealanov's first reinforcements arrive; a Shilka platoon that he feels is perfect to protect the Acacias from the recce. He moves them at speed toward the tree line but they have no line of sight yet.

Sealanov's T-64 company pounds the hostel causing casualties. The BMP company disembarks troops before the hostel and prepares to assault the building. The heavy shelling has pinned the occupants. The Welsh are determined but so are the Soviets.

Unfortunately for Sealanov, he forgot the 1st platoon and its interlocking fields of fire. The assault ends in a bloody mess. Eleven bases of the company are left dead in the hostel courtyard. The remainder fall back to an abandoned storefront across from the hostel. 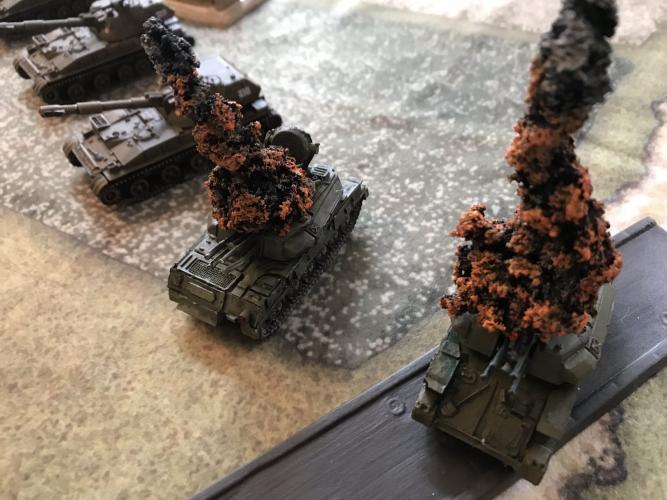 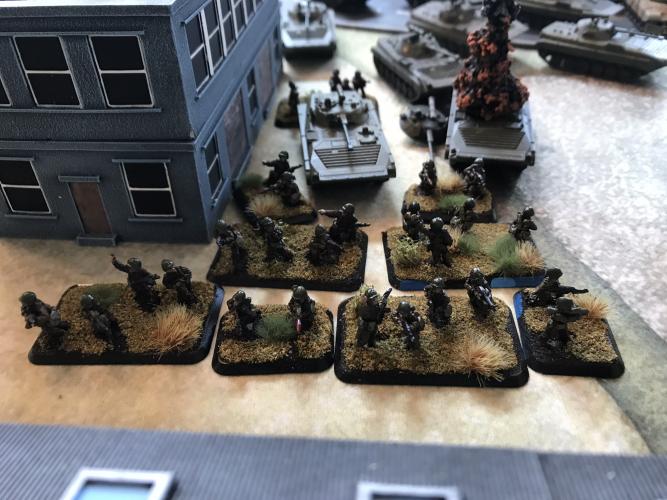 The recce push through the tree line, bogging only one vehicle and destroy the Shilkas sent to destroy them. They have now killed two Soviet platoons.

The 2nd platoon in the hostel unpins and pours fire into the remaining BMP's. The two straggler bases of infantry, both Milan teams which never made it into the hostel were forced to take cover behind hedges outside. They too fire into the mass of burning vehicles. 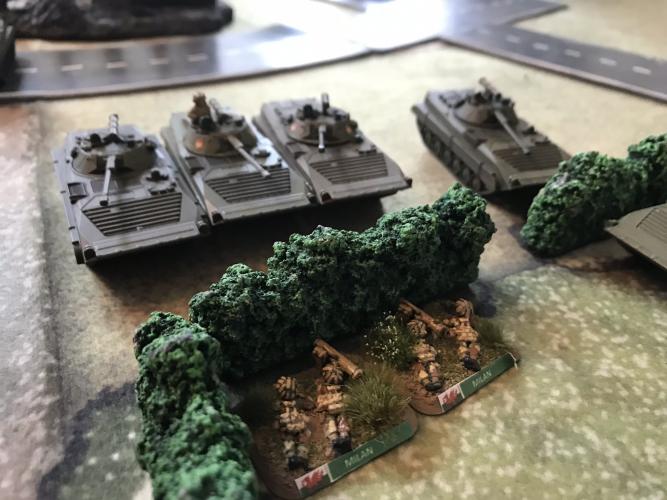 The Acacias now begin to feel the heat and switching from bombardment, fire direct at the recce, knocking out one Scimitar.

More Soviet reinforcements race down the Aktienstrasse towards the thick of the fight; a second company of T-64's and a company of Spandrels.

The remnants of the Motor Rifle Company engage the 1st platoon in a firefight from both floors of the empty store front. They cause no casualties but do pin the platoon.

Sealanov's losses have been heavy but he feels victory is still within his grasp as the Welsh have yet to get any reinforcements. 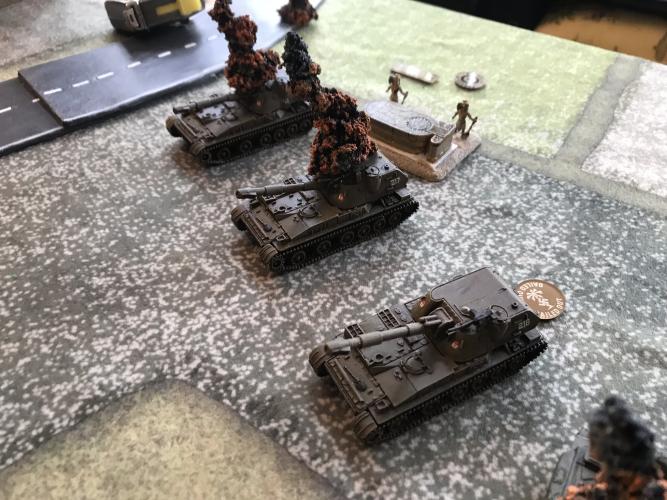 The Acacias go down

The first British reserves arrive in the form of a Chieftain troop.

On the British right/ Soviet left the Scimitars continue their rampage, now destroying their third platoon, the Acacia battery.

The firefight between the 1st platoon and the remnant of the Soviet Motor Rifle company takes an unexpected turn when the Welsh unpin and proceed to pour devastating fire into the Soviets reducing them to three bases total. The BMPs are now all dead and the first T-64 company as well as the Sealanov himself are now dead. 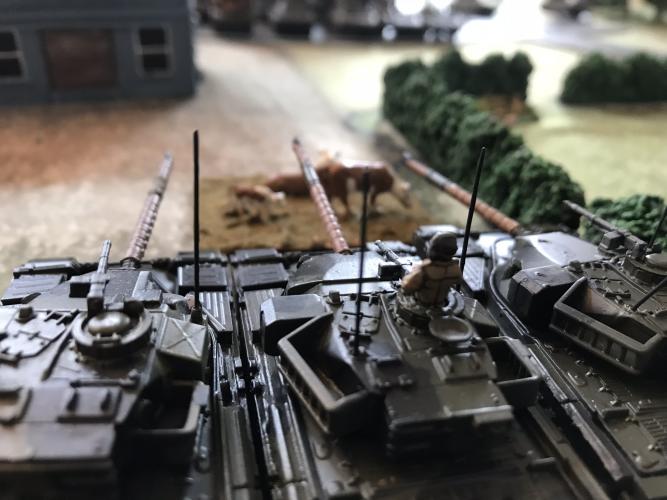 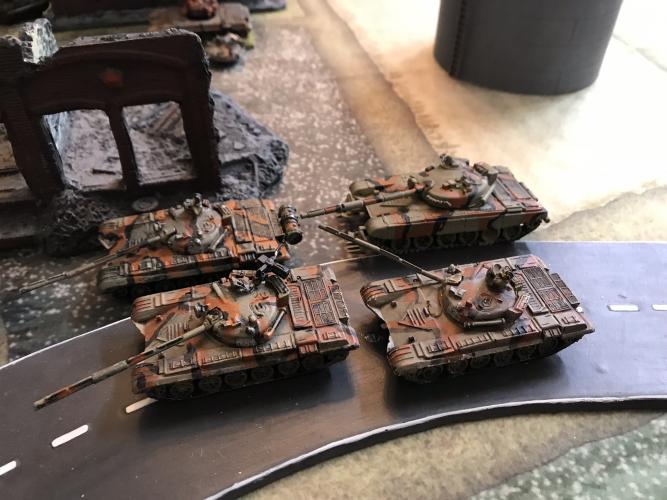 In a last grasp for the brass ring, the remaining T- 64 company moved into position and fired on the Chieftains, bailing one. The Spandrels could not fire since they moved. 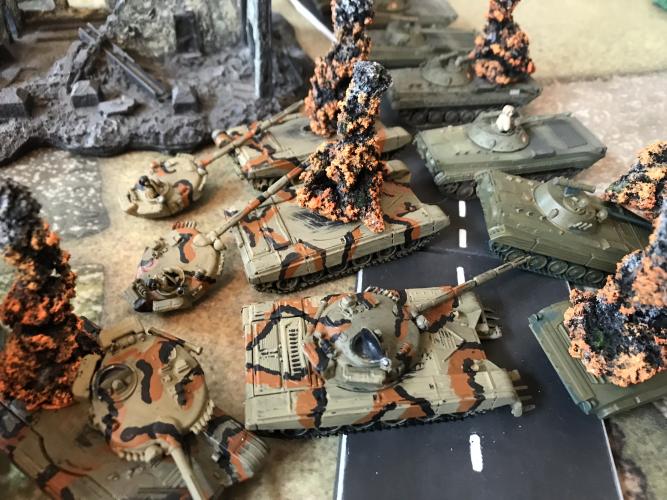 This would be the final turn. A combination of Milans and Chieftains killed all of the T-64's and also the two Spandrels. The infantry fell to the combined fire of both Welsh platoons. The only remaining Soviet unit, an Anti-Aircraft platoon promptly left.

If ever a unit deserved a battlefield commendation, it is the Scimitars. These plucky lads killed three enemy platoons singlehandedly. It was a closer game than it appears from this AAR and very hard fought.

My thanks to Sealanov for a great game.