The Men of Harlech

We played the Hanover scenario. The Welsh defended and The Soviets attacked. The Soviets cleverly placed the two objectives at opposite ends of the table, forcing the Welsh to spread themselves thinly. With only four platoons of Welsh initially on table and two of those in ambush, one mech platoon was placed on each objective. The left deployed in a small copse of woods and the right hand platoon deployed in a barber college across from a fast food store which became the company command post.

Wasting no time, the Soviets deployed all their infantry on foot and used the BMP 2 transports to shell the barber college with barrage after barrage of missiles. The artillery battery and also the Red Air Force both pounded the defenders as well. The infantry dashed forward at full speed as the Welsh held their fire to avoid losing gone to ground. Many men thought of Isandlwana as they watched the hordes approach.

On the Welsh turn, they sprang their ambushes on their left having noticed that the Soviets held their objective with only Carnation battery. Both Milan platoons fired and destroyed 4 vehicles and bailed a fifth. The Soviets passed their test to remain on table, but it looked grim. Everything else but their Hind air landing company was engaged in the assault on the barber college and too far away to help their comrades.

Turn 2 was more of the same on the Welsh right as the Russians threw everything they had at the defenders in a determined attempt to take the barber college. The Soviet commander was moving at breakneck speed toward his objective. Now he launched the first of several wave attacks on the barber college after more heavy missile fire. The assault was halted and thrown back by intense automatic weapons fire but the Comrade Major was unfazed.

It was at this point that the Welsh made a mistake that nearly cost them the game, hoping for a quick victory, or at least to force the Soviets to pull forces off of the main attack, they launched the 1st (left hand) platoon’s FV 432’s on a race toward the Soviet objective. Unfortunately, rather than fire 8 Milans at the remaining two Carnations, they opted to send the Spartans to support the other platoon as things were dire and the pressure mounting. The remaining 4 Milans fired and only managed to destroy one of the remaining Carnations which again passed their test to remain on the board.

Turn 3 saw the Soviets bring on a unit of 3 BMPs from reserve right in the teeth of the FV 432 glory ride. They killed one and bailed two of the Welsh carriers. The Welsh were stunned and quickly sought cover. The four Milans destroyed two of the BMP’s and a stalemate of sorts developed on the left; if the Welsh infantry moved toward the objective held by the one BMP and the one Carnation, they uncovered their own objective to the Soviet air landing company hovering off board. The action returned the right hand platoon and yet another intense missile barrage followed by another assault on the barber college. This one also was repulsed by intense automatic weapons fire. The Soviets now threw their second BMP platoon into the fray in support of the first platoon.

Turn 4 began as the men of Pontyfridd began to sing as the Soviets moved forward methodically to set up the third assault by landing the Air Assault company in the park beside the barber college. At this point the first Welsh reinforcements arrived in the form of the Scimitars which poured fire into the landed Hinds, destroying three and killing most of their complement of Spetsnaz. As the Scimitars launched an assault through the burning wrecks, the remaining Hind lifted off ending the turn.

Turn 5 The Soviets fired another missile barrage and finally began to whittle down the defenders on the right. The inevitable assault went in again but once again was stopped by a hail of automatic weapons fire. The stalemate continued on the other flank. In their turn, the Welsh now received both platoons of Chieftains and brought them in in support of the sorely pressed men of the barber college who were by now reduced to singing “Delilah” in an effort to stir their Welsh blood lust. It looked as if one more assault might end in Soviet victory. Alas, for the Soviets it wasn’t to be. The Chieftains came on via blitz moves and thereby got their full rate of fire, raking the BMPs with yet more support from the Scimitars, killing the BMP transports for one platoon and tearing into the second causing grievous losses. The by now very depleted infantry of the first Soviet platoon also now died to a man.

Turn 6 was the final turn. The Soviets managed to kill both the remnants of the FV 432 charge on the left flank and also the Spartans which had so foolishly been ordered to the right flank as support. They were swarmed by RPG teams and killed to a man. Yet another Soviet assault on the barber college failed, and with the Red Air force having made only one appearance all day, it was over when the Scimitars took the now open Soviet objective on the Welsh right.

It was a great game, which truly could have gone either way until the last. 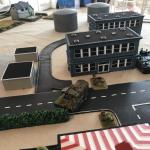 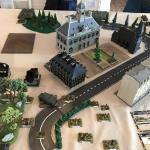 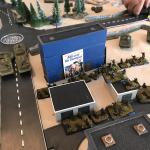 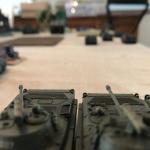 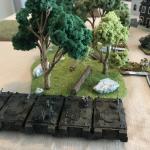 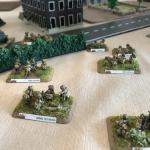 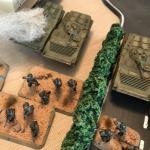