The Mission this time round was Bypass, from the Short Missions Pack. We enjoy the short missions, due to being able to play a couple of 50pt games in an evening at our gaming club.

I also tried to field an Airmobile Infantry Platoon in support of the ANZACs this time round (Gurkhas in name only, sadly). This was decided, even with the recent changes to transport helicopters in FM:101. Unfortunately, I rolled defender, and thus didn't get a chance to utilise them fully. Oh well, maybe next time.

The little birds drop off some friends 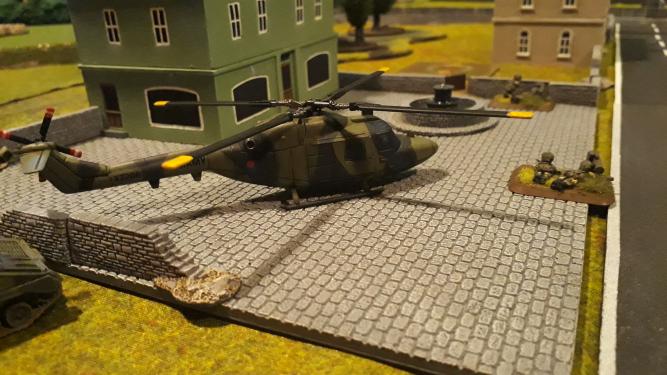 The Lynx drop off the Gurkhas, armed with slightly bigger missiles this time round.

Slater's company from the 5th/7th Batallion, Royal Australian Regiment, were assembled in the town square of the picturesque Niedersachsen town of Bispingen. Their APCs parked up nearby, with the supporting MRVs waiting nearby.

"Alright! Oi got my bollocks booted for that little jaunt down south! An' the Tankers 'ave went back west to resupply!" Captain Slater informed the assembled Diggers, who give a sarcastic round of applause in response. "Yeah yeah. So, to make up for it, we've been tasked with 'olding this road an' prevent the Ruskies pushin' through to Hamburg an' beyond. The Yanks are a bit north of here, pushin' them back too. If we 'old off whatever's comin' our way, this moight do wonders for morale... as well as keepin' some tanks off the front loine!" He slapped the back of his hand on the map he was holding as the squaddies gave a more rousing cheer in response.

The cheer died down as the sound of rotors grew in the air, sounding like it was heading straight for them. A moment later, a trio of Westland Lynx helicopters appeared over the tree-lines to the west.
"Clear the square, they're comin' in!" Slater commanded, the men grabbing their kit and making room, many heading into the beautiful 'Parkplatz' in the centre of town. Slater watched as the helicopters hover overhead, before descending gracefully, coming to a halt, spread over the cobbles.

Out of the helicopters jumped familiar looking men; Lieutenant Thapa's Ghurka Brigade began assembling nearby. Slater noted that they had gotten their hands on some Milan missiles to replace the slightly unwieldy and less impactful Karl Gustavs.

"मलाई परवाह छैन यदि तपाईं airsick मिल्यो! स्थितिमा जानुहोस्, रगत खत्तम! " Thapa yelled at one queasy looking soldier, lugging a GPMG into a nearby cafe. The officer's demeanour changed immediately when he recognised Slater, from hard and commanding to disarming and smiling. "We got told the Kangaroos needed some help again. They could not stop us coming, sir. Even if it meant flying in the hēlikapṭara." He snapped a smart salute off, which Slater returned lazily.

"Sure, good to see you again Thapa..." Slater gave him a slightly warmer, friendlier handshake in return. "You guys seem to know what you're doin'. Don't know what's comin', but if you see it, shoot it. Easy enough?"

"Oh yes sir. Easy enough. We will put our new toys to good use. We won't let you down, sir." The Nepali man nodding enthusiastically, before returning to his men to yell them into positions as the helicopters took to the air once more.

"Alright you lot! Positions. These bastards might come outta nowhere!" Slater commanded, pointing to positions and getting his men ready for their eventual encounter. 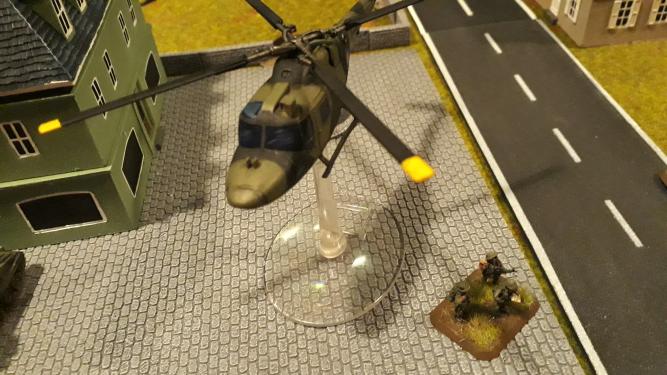 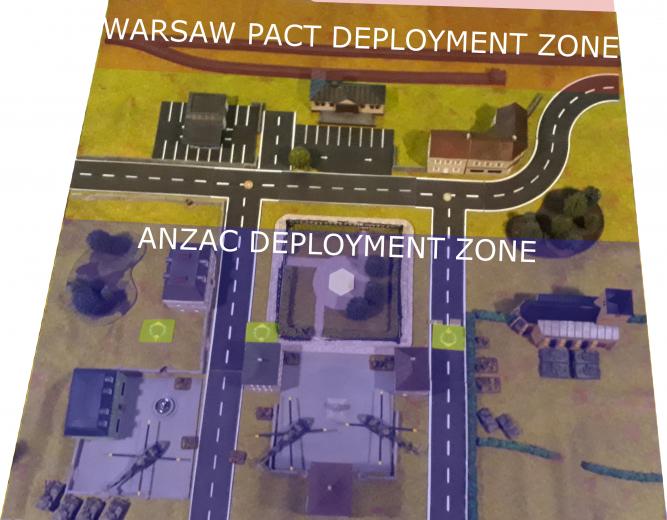 The ANZACs dig in, waiting for the Russians to deploy.

"Milan Troop! Clock Tower!" Slater commanded, pointing to the four-hundred year old tower that looms over the town square. "Mike Troop, behind the church. First platoon; that house... second platoon, that house..." The commands continue as squaddies run from place to place, the two houses covering the roads south, while the MRV troop hunkered down behind the Lutheran church nearby.

The rumble of engines slowly grew louder north of the town, Slater taking up a position near the cenotaph in the Town Square.

"Ere they come! Wait for my signal!" Slater yelled to the waiting men, as the first Soviet vehicle; a BDRM reconnaissance car, slipped into view behind the train station, before vanishing again behind the houses to the North. "Ere we go again..." 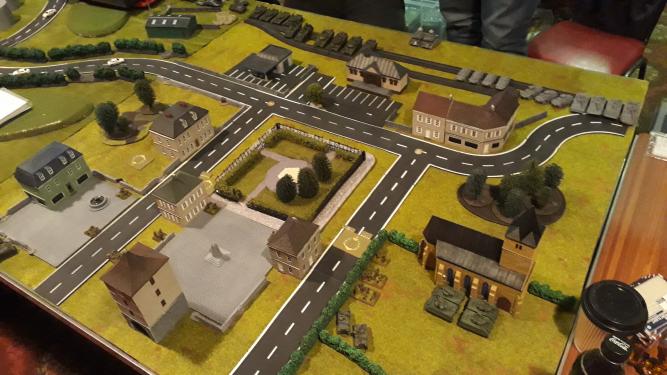 The Red Menace approaches, unaware of the prepared positions ahead. 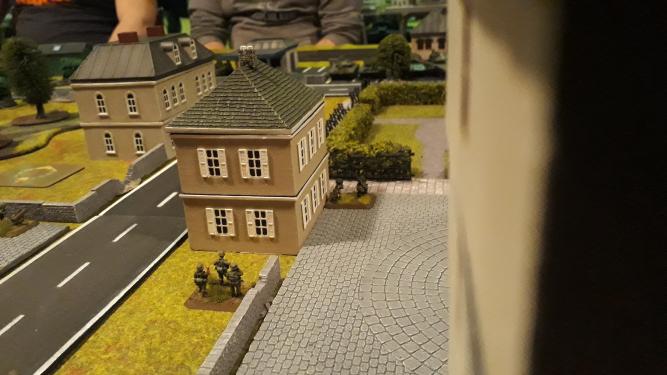 The main body of the force finally made their appearance, across the town, crossing the railway lines, they trundled towards the ANZAC position. Slater glanced to the flanks, the MRVs were ready and waiting, the men in the houses crouched and eager.

"Jus' a little further..." He growled to himself as he watched a few armoured vehicles roll into sight, BMPs, their turrets still, unaware of the impending fire.
But, just as Slater was about to give the order, one of the lead T-72s opened fire, followed by the rest of the battalion. The rounds blowing chunks of masonry out of the upper floors of the clock tower. "F***! Fire! Milan troop, fire!" He barked into the comms. He'd wanted to wait to get the jump on the tanks, but their opening salvo had left him no choice.
Missiles streaked from the windows high above him, two tanks catching the shots on their front; the angle allowing them to punch straight through, leaving burning wrecks behind.

As the missiles engaged, the air suddenly filled with the loud, echoing crack of HESH rounds beside the church. There were the sounds of shot being fired, but disappointingly, no sound of impact on anything metallic, only the distant *thud* of shot hitting mud far off in the distance.

The cracking of HESH rounds off towards the church was soon met with the deep thudding of the BMP's 73mm gun in return, the sound of a shot sheering against metal jerking Slater's attention in that direction, but the hedges were too high to make anything out beyond them.

"Mike troop, report status!" He demanded, having to cover his ears as more rounds impacted above him, the entire side of one of the floors of the tower blown away. He could see a figure being dragged back from the opening, probably wounded, likely dead. "Repeat last!" He yelled, the transmission barely audible over the whine of Milans streaking out from above him, and the Gurkhas now joining in the action.

"Mike-Three is hit, but it's a jam in the turret! Gonna lair it up 'ere, an' give 'em a HESH prezzy..." Sergeant Hunter's crackled reply was just about heard, before the rounds started flying again. This time there was the unmistakable sound of HEAT rounds impacting on metal, a plume of black smoke drifting over the church confirming that the BMPs had been dealt a nasty blow.

Back ahead of him, there was a snarling, roaring sound, like a caged animal. A brief check showed that it was in actuality a pair of BMPs and a pair of T-72s getting caught up on a tall concrete wall. The suffering of the T-72s didn't last long though, as Milan missiles spiralled from the Clock Tower, getting revenge for the earlier damage.

"Good! Get ready for whatever comes next!" 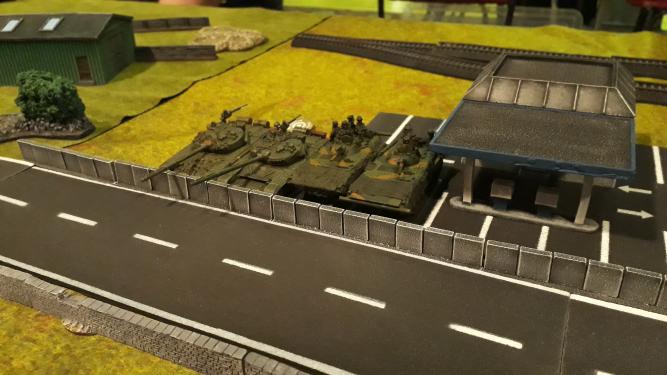 The enemy of all tanks, everywhere: Hull-high walls

Castlemane XXXX is better than Fosters (Also called: I couldn't think of a witty subtitle)

The initial ferocity of the Soviet thrust seemed to have been dented, as a few stray rounds impacted on buildings, no serious damage being done. A large shot grazing the rear most Abbot, resulting in the artillery piece hastily rolling over the wall ahead of itself to get out of the way, before the rest followed suit, their guns levelling at some brave BMPs who had slipped through towards one of the infantry positions. The 105mm rounds tearing them apart.

"Is that it?" Slater thought to himself, as the roar of aircraft engines echoed around the square. "Ah..."

The aircraft roared overhead, the brief glance at them confirming them to be, thankfully, RAF. A buzzing round of fire suddenly flared up from behind the train station. A pair of hidden Shilkas engaging the aircraft. One of the planes taking a few nasty hits, sending it veering off course and out of sight, as the others pressed home the attack.

There was a moment of silence as Slater watched the bombs fall, before a wall of flame rose up from the distant positions. A few more cracks from the HESH rounds, and suddenly the town was quiet. The Soviets were pulling back.

"Did we draw the Weekend Warriors?" Slater thought aloud, the men in the nearby buildings calling to each other as the firing stopped and calm returned. 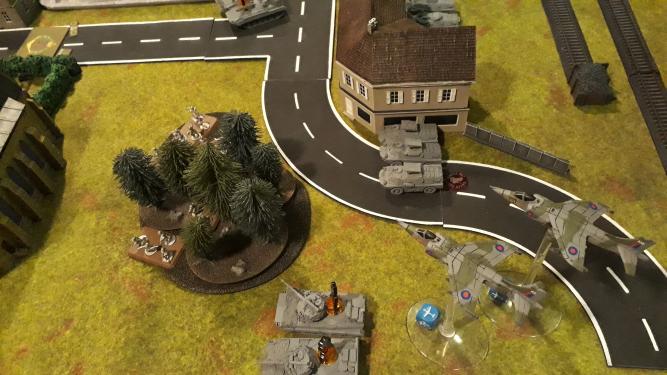 The flight of Harriers drop submunitions on the tightly packed, lightly armoured targets 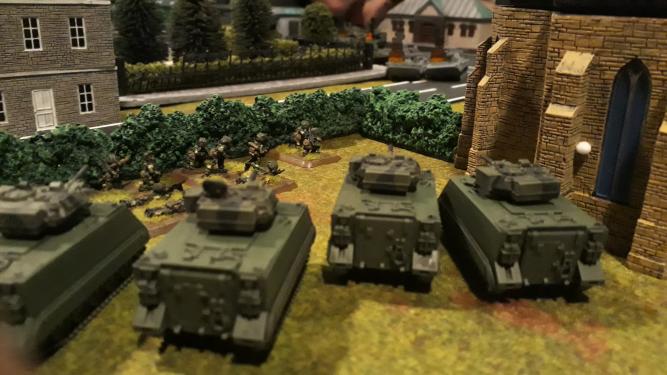 The MRVs finish their duel with the BMPs, winning convincingly

I don't think the Australian for Comrade is "C***"

The peacefulness of the town was restored, but soon there were voices and shouts coming from the small copse of trees in front of the church. Half a dozen dazed, singed, and tired looking Russian soldiers were walking out with their hands in the air, calling out to the Aussies.

"Мы сдаемся! Товарищи! Пожалуйста, не стреляйте!" One of them called out, his hands together like in prayer, until he was nudged by the elbow of his fellow soldier.

"Oww... I... Comrades! Please, no shoot us. We give you up!" He called to them. Slater slung his rifle over his shoulder and headed towards them, the Diggers in the houses still training their guns on the group, who pushed the other forward.

"Leytenant Zdorsky has... valiantly fallen back?" The man offered meekly, the rest of them nodding unconvincingly.

"What a shower of sh-... Sergeant! Search 'em, an' then we'll get on the road..." Slater sighed, shaking his head and gesturing. "Oi'm gettin' too old for this." 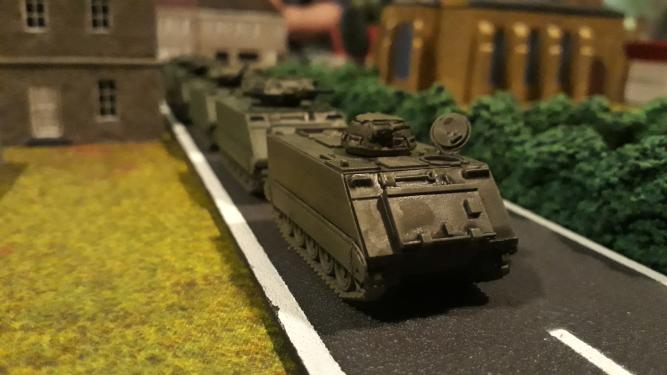 With the Soviet spearhead dealt with, the Aussies get back on the road

And how Comrade Crapinsky must feel...