The Night of the Roos... Ruhrs?

The Mission this time round is annihilation. A little disappointing as it wasn't anything more interesting, but sometimes you need to just get in and do some real damage to each other.

You'll note the table is unchanged from the last game I posted up. This is for quickness, as we have limited time at the club to play, and enjoy getting a couple of games in. I always make sure I take both sides though, just in case there's a tactical advantage to the terrain. 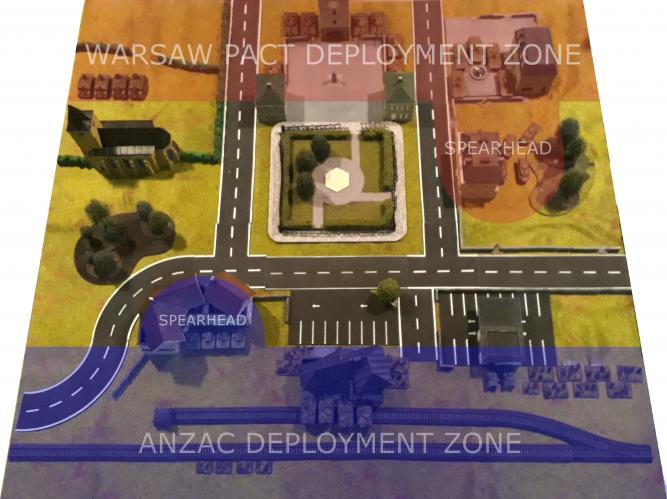 Slater's Company, of the 5th/7th Battalion, Royal Australian Regiment, were travelling back towards Amsterdam from the front lines. They were due a resupply, and to be cycled out of combat situations to allow the men some time to recuperate. The column had pulled into a small town just east of Osnabrück, to await the heavy duty trains to load up the APCs for transport back to Amsterdam. The Gurkha Brigade had joined the column on this resupply run, their helicopters dropping them off to take the train with the Aussies.

Slater stood on the edge of the platform, looking over the assembled men gathered on the tracks. "Roight, listen up! The trains aren't due until tomorra'. So, we're gonna billet down here tonoight, an' be packed an' ready for four A.M." This information drew groans of derisal from the Diggers, a few mumbled profanities amongst them. "Yeah yeah, grumble complain! We've got a week of R&R comin' up, so think of this as your last early rise for a while, yeah?"

The men buzzed a little with excitement, discussing hitting bars, pubs, and places of ill repute once they were back in Amsterdam.

"Ere, Steve-O! Ya reckon Katie is still kickin' 'bout Amsterdam?!" One of the squaddies piped up, drawing wolf whistles and jeering from the others as the sergeant flicked a two-fingered gesture in return.

The night passed almost without incident, the Gurkhas and Aussies making good use of an abandoned hotel overlooking the train station, the patrols taking it in turn to wander round, mainly stopping by the petrol station to grab a snack or coffee; making sure to leave some money for the owner, should they ever return.

Just before muster, Slater was awoken by knocking on his door.

"Cap! 'Big Drongo' claims 'e 'eard engines comin' down the road!" One of his men called in to him. He pulled himself out of his sleep and rose, grabbing his kit and heading out with the man.

"Where? An' then start getting the platoons into position." He commanded, being sent over to one of the sentries standing by the train station. The man stood nearly a head taller than the Captain, which was impressive as Slater himself almost hit 6' in his boots.

"Don't sound much loike tanks, Cap." The man informed him, his voice low, but soft.

"Good lad, it doesn't..." Captain Slater agreed, cocking his head to the side, hearing the muffled engines growing a little louder in the still night. "Seems loike someone's wantin' to sneak past us."

A random stab in the dark 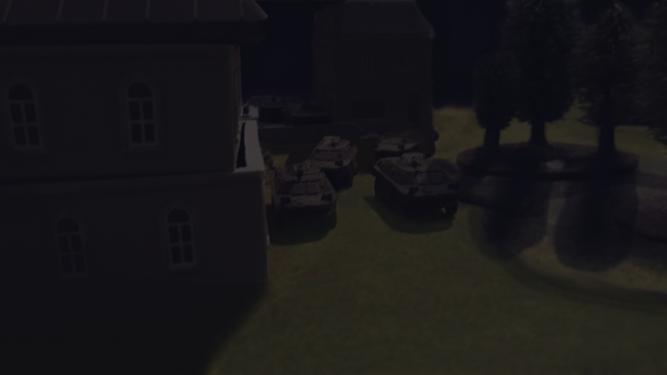 BRDMs sneak forward under the cover of darkness, BMPs following close behind

The rumble of vehicles grew louder; Slater eventually making out the shapes in the darkness. The street lights had been knocked out weeks ago, so they'd be no help in this one.
Not just vehicles were moving in the distance, whispered voices and the pounding of boots signalled infantry advancing. Finally, his initial thoughts were proved wrong, as larger, squat shapes made their way down the tarmac roads towards him. They had brought tanks after all.

The Aussies had finally arranged themselves into positions. First platoon took cover around the train station, Second platoon were hunkered down around the petrol station. Captain Slater could still see some of them sipping on coffee as they awaited orders to fire.
He hadn't given one, but suddenly there was a loud whining hiss from the top floor of the hotel; three MIlans streaked out of the window, spiralling their way towards the troop of tanks rumbling in their direction. The darkness seemed to play havoc with their aim though, as only one missile found its mark; causing the tank to jerk slightly, damaged superficially, but still functioning.

The one thing he didn't expect was the return of his friends from the RAF, as a flight of harriers streaked over the battlefield, unhindered as whatever AA asset was accompanying the advance obviously had been unprepared for their arrival at this early hour of the morning.
The bombs flashed across the front of the Aussies, one of the small scout cars erupting in flames, as the BMP next to it slammed hard into the wall, smoke plumes rising from the engine deck, signalling the end of it. The only other thing Slater noted was the lack of infantry continuing towards him; they'd obviously been struck into shock by the sudden bombing. 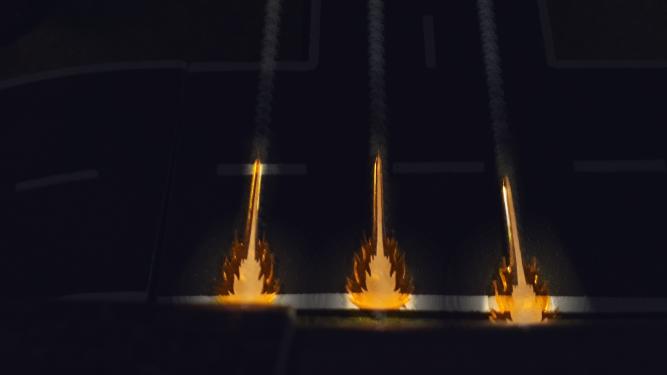 Milans fire in the darkness, with little effect

Smoke them if you've got them 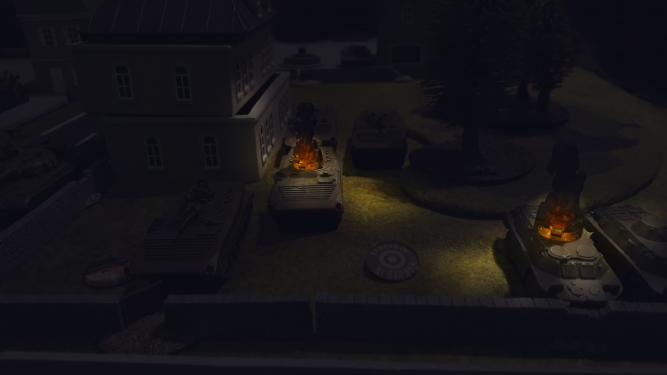 The BMPs crackle like a campfire in the early morning

Slater watched the tanks that took the Milan salvo slip off the road, round behind the trees.
"Weird... most Ruskies rush Milan positions..." He pondered aloud as he watched them go. Over the other side of the town, the advance from the light vehicles had stalled slightly, the BRDMs pulling back into the forest, while the BMPs scrambled to get into a decent position, a little 'all at sea'.

The Gurkhas with the Milans had obviously lost their targets, and seemed content to wait it out. Slater though to call up to them about watching the other side of the forest for them appearing, but thought it best to trust Lt. Thapa's intuition and experience to guess that.

At that moment, the Harriers returned with another salvo, following the tanks that had ducked behind cover. Slater only saw the flash of explosives landing, but the sight of some dark smoke and smouldering flames told him that at least one had been caught.

"Air Force earnin' their pay this mornin;, eh?" He asked, the men nearby nodding, looking eager. "Hows abouts we do the same? Want to get some?" He suggested, nodding to the tanks rolling closer. The men responding by cocking their rifles and raising their man-packed missiles. 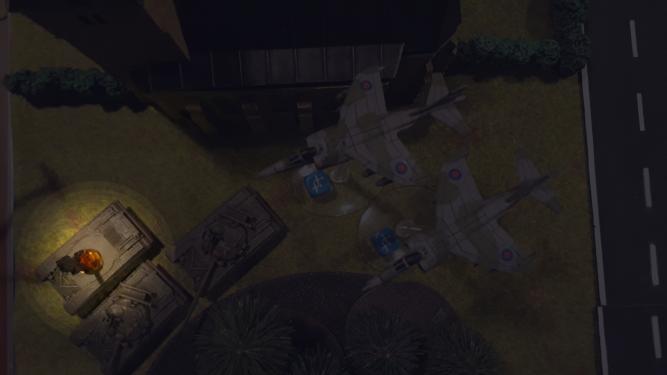 The Harriers chase down the T-64s, lighting one up. 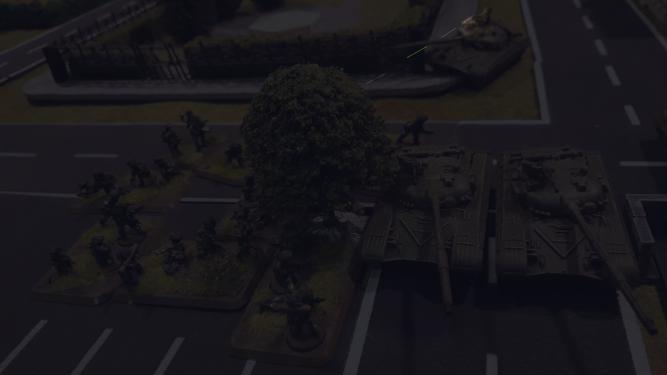 Machine gun rounds rattle off as the Diggers get stuck in

Slater readied himself, the squaddies nearby crouched in anticipation of the assault. The tanks had rolled all the way forward, their guns rattling off the building.

"NOW! OZZY, OZZY, OZZY!" Slater yelled as he took to his feet, charging towards the lead tank in the shade of the trees.

"OY, OY, OY!" His men answered, following on through the staccato of machine gun fire from the few tanks that could draw sight to them. Miraculously, his men managed to juke and weave through the fire, grenades being tossed onto engine decks, and Karl Gustav missiles bursting from tubes as the assault went through. The first tank bursting into flames under the onslaught, his fellow rolling round to assist, but a well-placed round caught under the turret ring; the tank grinding to a halt in front of the Aussies.

"Ha! Ya bunch'a f***in' wankas!" Slater jeered, his Queensland accent coming through strongly as emotion got the better of him.

"Cap'?" One of the men asked, his questioning glance being waved off as the Diggers, hunkered down behind the disabled tanks, waiting for their mates in Second Platoon to finish the job.

Across Town, second platoon opened up finally as the BMPs tried to get going again, a few round knocking them for six.

"They think they're just as good as us!" A soldier remarked as he saw them preparing to assault in turn. 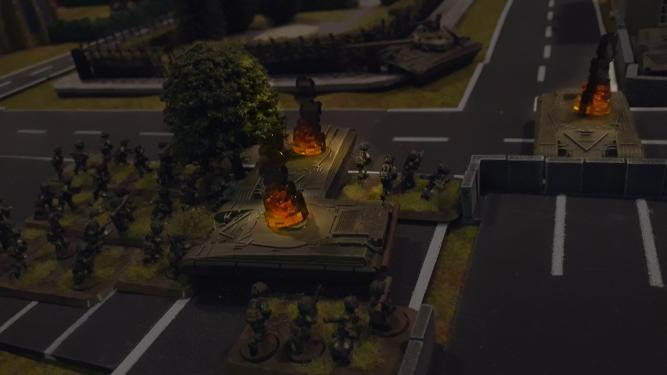 The light improves as the sun begins to rise, aided by burning T-64s 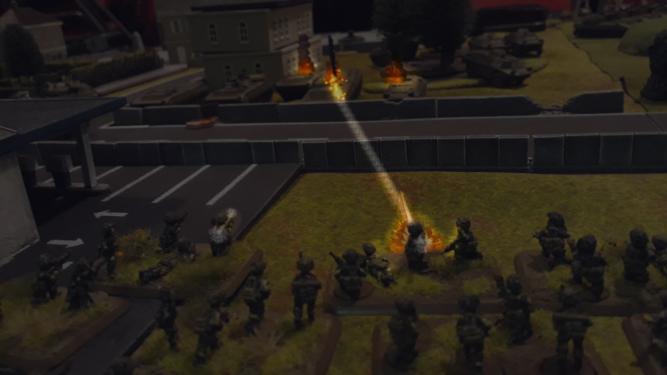 Charlie G. does his job lighting up, and finishing off the BMPs

Slater watched platoon two vault the walls lining the roads, and tearing into the BRDMs that were struggling in the woods nearby. Flashes and flares sparking as light anti-tank weapons made short work of the cars.

"Strewth Cap'... bet they didn't think we'd be camped out here." A squaddie commented as his men waved down the remaining tank crew out of their disabled vehicles. The infantry in the buildings seemingly having slipped away when all hell broke loose. 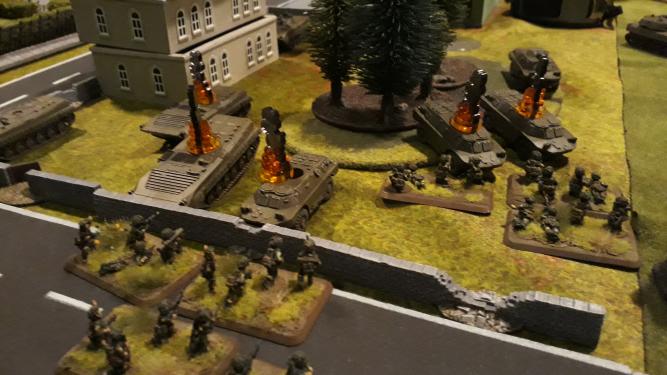 The ANZACs pile into the BRDMs, making short work of the scout cars

It was just over an hour later; the train arrived, a little late, as was expected of the British Army. But soon enough the APCs were loaded onto the flat-beds, and the men settled into the passenger cars for the journey back to the comfort of Amsterdam.
The Gurkhas had been resummoned by HQ, their orders were to return to the front, as Lynx helicopters landed around the square to collect them. Lieutenant Thapa had his men salute the Aussies as they boarded the train, the Diggers giving varied salutes, calls and gestures in return. 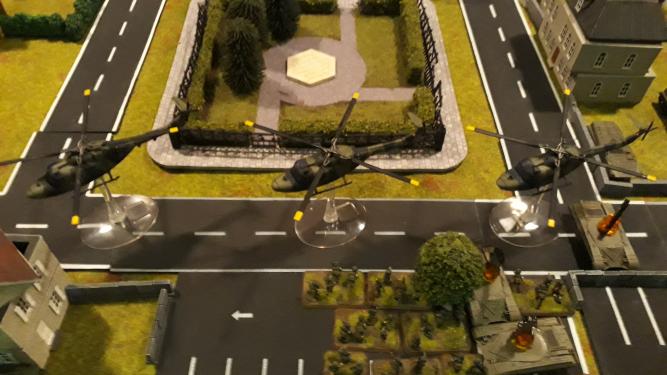 The Lynx return to collect the Gurkhas, who are always needed elsewhere.

(I had to, Gurkhas and Bagpipes... together)

In both my games this week, I attempted to try the new helicopter rules (which were thankfully overturned, mostly, this morning by Battlefront). Sadly, both missions had me defending, with no objectives to chase on the other side of the table, so there was no point in fielding the choppers, at all.

I had to feel for my opponent in this one, we tried out the dawn rules because it would be a bit of fun, and neither of us had anything with Thermal, only IR, so why not?
So, what went wrong for him?
[*] Forgetting the Milan minimum range, despite reminding himself twice before the game started.
[*] Finding out that Shilkas didn't have IR, meaning they never had a target the entire game.
[*] Having no opportunity to bring on the Hinds, as targets were scarce, or in better cover than was feasible to attack.

As the report implies, I'm going to move onto another list next week, but Capt. Slater and the Aussies might return before the campaign ends.