Leipzg, Fall of the Hinds

Sun was shining high in the sky when the brutal West Germans attacked the liberating peacekeeper forces of the Soviets. The commander of the West Germans was a Canadian, and everyone knew how cold, cruel and above all, calculating the could be. General Tyler_MK of the three C’s took the battle field for the first time in this campaign.

General T of the fluffy bunnies, and ‘hey can’t we all just get along?’ was caught flat footed at the local orphanage, were he was busy knitting sweaters for children that had lost loved ones, in the time it took him to marshal his loyal Afgansty peacekeepers the West Germans had already recced the area and were almost onto of one of the objectives. 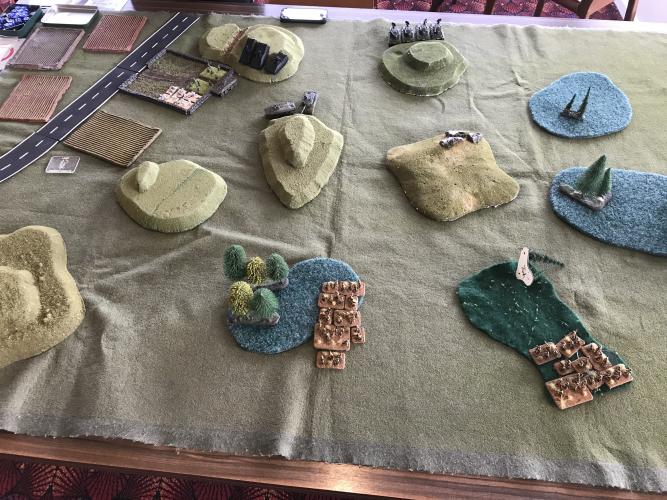 In a surprise move, the Leopard 2 tanks were left off table. The West Germans positioned to take the objective. The Soviet Motor rifle platoon sprang from ambush and charged forward, one platoon of Afgansty moved with them, hoping the Spigot launcher would keep the light vehicles at bay. The brave Russian BMP-2s were gunned down by viscous Gepards and the HQ Leopard tank. 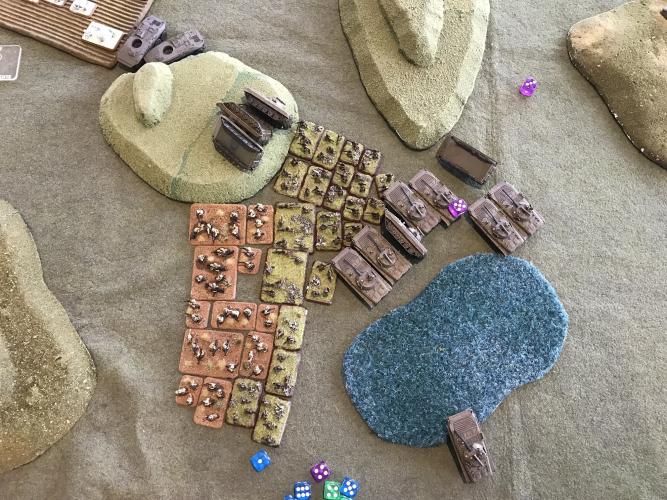 With a polite request into his radio Commander T ordered the Ride of the Valkyries cassette tape to be inserted in his command vehicles internal music system. With that, the Hinds descended from the sky to engage the Gepards. Spigot and BMP-2 missile fire bailed two of the Gepards, then the Hinds unleashed their pacification rockets. The Gepards were not going down without a fight and AA fire destroyed two of the Hinds. The remaining two Gepards, far to scared of brutal Canadian General Tyler_MK's reprisals stayed to fight (1 upright, 1 bailed). 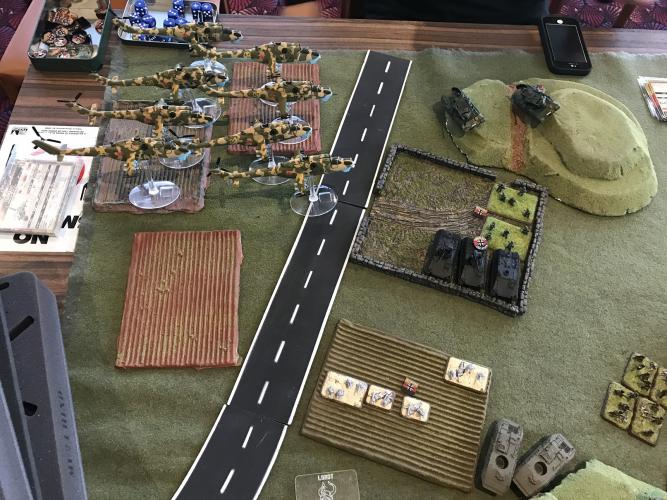 The missile carrying infantry of the West Germans sighted two hinds, and even without dedicated AA systems they were able to down two of the brave hinds, ending the lives of Hind platoon 'Hope'.

However, Soviet infantry was still moving forward and even with support of the Leopard 2 holding the objective was going to be a fight. The remaining Gepards fell to BMP-2's and spigot fire, the motor rifle platoon and Afgansty Soviet infantry pushed the West Germans off the objective. 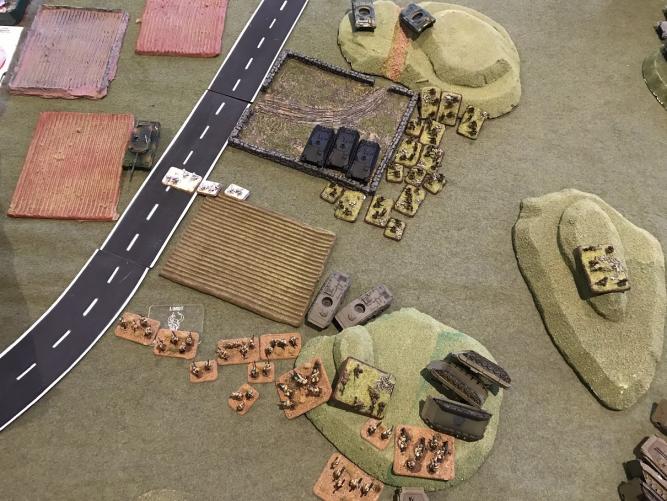 With the heroic Soviet Infantry closing in, Nasty General Tyler_MK screamed incoherently into his radio demanding reinforcements (or possibly a pizza, was incoherent after all). Leopard 2's and Rolands entered the fray. The incredible speed of the Leopard 2's, combined with devilishly accurate, fire saw the remaining 6 BMP-2s destroyed. The Motor rifle Soviet platoon would now be hitching back to base.

However, it was at this moment that the Fiendishly Clever Canadian Tyler_MK revealed his true plan. Callously sacrificing his troops lives to draw the gullible and overly trusting Soviet troops far from their right flank. 3 Leopard 2's, 3 Jaguars, 2 Rolands and a small recon platoon charged towards the right flank objective. Only one small platoon of fearless Afgansty stood in their way.

(At this point the photo taking stopped. Having been drawn into a trap i was scrambling to recover and thoughts of photography went out the window.)

In a moment of desperation, and arguable stupidity, the 4 Hinds from squadron Happiness attempted to stop the Leopard 2's. With them gone the Afgasnty had a chance at holding while the motor rifle platoon sprinted across the field. On the left flank the HQ leopard was busy picking off the Afgansty on the left flank objective. The Rolands destroyed three hinds, the remaining hind missed, and things were not looking up for our heroes. The Leopard 2's crashed into the front lines of the Afgansty supported by missile fire from the Jaguars and mgs from the recon. When the smoke cleared two RPG teams and a Gremlin remained contesting the objective, and cowering in the forest. Some reserves started turning up (on turn 5) for the forces of good, but they were too far away.

The single remaining Hind from for Happiness platoon found a spot out of range of the Rolands, but in range of the Leopard HQ tank that was bullying the poor Afgansty on the far left flank. A single missile of hope shot out and blew that tank to bits. Cheers and cries of joy were heard throughout the land.

The motor rifle platoon was fast approaching the objective, but needed the two RPG teams and gremlin to hold on for one more turn. Exactly what this swarm of infantry was going to do once it got to the Leopard 2's was a problem for later.

To secure victory the Leopards just had to drive the remaining Afgansty off the objective. 2 Leopards launched an assault into the forest, one bogged. The bravest of the brave, the hero of heros, the man with the RPG from heaven itself fires. Hits. Leopard rolls a one. Firepower is passed and the assault is stopped! Medals for everyone! Hope is restored. Leopards only have one active tank, roll a one for morale.... and flee the battlefield. With only 3 Jaguars and 2 recon vehicles facing a swarm of RPGs the West Germans cowardly quit the battlefield.

Victory for the Soviets! Bagels for everyone!