Niederbayern, where .50 cals are better than VADs

Dawn was approaching as the USA forces were patrolling the out skirts of war torn Niederbayern. An advanced force of Afgansty were pushing through the ruin buildings in an attempt to secure defensible ground before the sun came up.

(we played the ruins as essentially buildings and tall terrain for the purposes of line of sight).
https://bowlivestorage.blob.core.windows.net/firestorm-stripes/formidable/9/5ab010ec46f97-5ab010ec46fdfPhoto-19-3-18-7-54-03-pm.jpg.jpg
The USA deployed within the woods while the Afgansty took up position in the ruins, the scout platoon (which turns out should have been 2 BMP’s not BDRMs) allowed for forward deployment. The spigots set up waiting for a chance at any AA assets.

The USA started to work on the Afgansty, Abrams shot crashing into the ruins. The hinds took the opportunity to attempt to snipe the Abrams, but cover and darkness made the Abrams just to damn hard to hit. The VADs repositioned to take shots, but the some darkness and the Hind Russian made exterior defeated the AA battery. The second platoon of Afgansty building hoped its way forward and just as it got into position to fire on the AA as precise fire by the Abrams took out the Spigot.
https://bowlivestorage.blob.core.windows.net/firestorm-stripes/formidable/9/5ab012019f2ef-5ab012019f338Photo-19-3-18-8-08-43-pm.jpg.jpg
The VADS attempt to re-position, bog two to them, the Hinds seize the moment and pounce, or at least try to pounce. .30 cal and .50 cal fire take down two hinds while the VADs take out a third. The hinds only managed to destroy a solitary VAD. At this point the Russian commander is getting a might frustrated…

Afgansty are loitering a touch too close to the USA left flank objective, a reserve of Abrams turns up to put a stop to that. The hinds attempt to scare them off the objective, .50 cal fire torches another hind, but manages to take a tank of the oppressor with them. Afgansty keeps dying to concentrated Abrams fire.

Having lost four hinds and a spigot for a tank and a single VAD the Russian commander orders everybody to keep their head down and wait for more russians.

More Russians turn up, Afgansty die in buildings…. repeat for a turn or three. While their country men are being shelled to bits and group of BMPs take up position behind the hill and wait to blitz up for a missile volley… this takes some turns to roll successfully.https://bowlivestorage.blob.core.windows.net/firestorm-stripes/formidable/9/5ab011f8d5360-5ab011f8d53a9Photo-19-3-18-8-45-39-pm.jpg.jpg

With one afgansty platoon taking moral checks the nine BMP-2s pass their blitz, both the artillery platoons range in to hit the VADs and the Russians unleash the frogs of war. With a massive amount of croaking and noise the Russians manage to bail a VAD….. a touch disappointing…. the return fire from the Abrams knocks out 6 BMP-2s. The USA returns to shelling the Afgansty while the Russians consider their life choices that had brought them to this moment.

On the far left flank a platoon of Russian Gophers were making their way stealthy round the board edge. They were bait to pull some Abrams out of position, the USA was having none of it, re-position 2 Abrams to cover the flank while maintaining the VAD AA bubble.

The Russian arty ranges in on the first attempt, destroying a VAD and bailing another! The final VAD runs! Hind pilots can be seen dancing in cockpits.

With the AA bubble gone the Abrams charge out of the safety of their forest to take revenge on the Arty that had taken away their safety net. On the other flank, again with no need to stay in the gone AA bubble the Abrams went Gopher hunter.https://bowlivestorage.blob.core.windows.net/firestorm-stripes/formidable/9/5ab0125b1797f-5ab0125b179cfPhoto-19-3-18-9-21-40-pm.jpg.jpg

The storm unit and remaining BMP-2-s were destroyed though they did get another round of missile fire off (just the BMP’s, the Storms were never allowed the chance to fire). Now that the Russian commander remembered that a).30 cals only have a 16 inch range and b) .50cals are +1 to hit over 16, he placed his Hinds with far more precision.https://bowlivestorage.blob.core.windows.net/firestorm-stripes/formidable/9/5ab012aa95424-5ab012aa9546cPhoto-19-3-18-9-22-47-pm.jpg.jpg

.50 cal fire was ineffective and while Russian ground vehicles were taking a devastating losses the Abrams were steadily being picked off. With only two abrams left to four Hinds the USA called for an ordered retreat and left the Russians victorious and counting the cost in broken machinery and dead men.https://bowlivestorage.blob.core.windows.net/firestorm-stripes/formidable/9/5ab012382167e-5ab01238216cdPhoto-19-3-18-9-13-57-pm.jpg.jpg 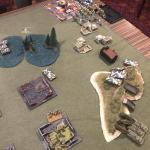 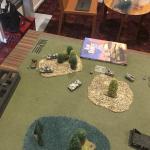 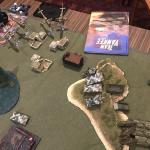 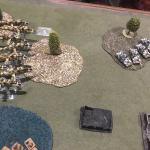 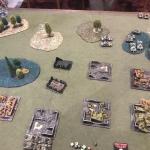 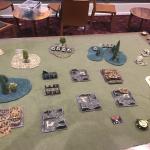