General POTUS removed his burnt uniform, got a clean pair of underwear, ordered his intelligence officer demoted (https://firestormstripes.warconsole.com/battles/lord-t-vs-general-potus-1520765560#report) and prepared to strike back. Soviet Commander T was moving on Amsterdam, but his “I burnt the General in his Command Vehicle BYO BBQ had delayed the advanced.” There was time to fortify Amsterdam, this time the General would be ready. Warthogs and VADs had been requisitioned and would be available to defend Amsterdam.

(Worth noting that the General and I are just hitting buttons on the Theatres map and playing the mission put forward. You could imagine the Generals happy face when Amsterdam required Deep scattered reserves…..)

“General POTUS, General POTUS, the soviets are attacking! Right now.” A quick glance out the window, night. Soviets attacking at night? With the USA having the better technology and far better equipped for night fighting this was generally not a thing… General POTUS gave the order. Drive the Russians back! He was a touched miffed to be informed that the warthogs pilots would need to be roused from the beds, and one platoon of Abrams was busy having its wheels buffed and would need some time to make it into the fight.

However, the Soviets had played it a little cautiously. Worried that the Warthogs might be flying at any moment they had deployed their AA Gophers up the front and only two small platoons of Afgansty were leading the charge. With three large buildings down the centre of the battle field the Afgansty only had to make it to the first one. They could them building hope down the field, or dig in and wait for the sun and reinforcements to turn up. Soviet Commander was quietly confident.

General POTUS grabbed his spanner and through it straight into the machinery that was T’s plan. The Abrams charged out of ambush machine guns blazing! One afgansty platoon was reduced to three stands and pulled back.

Soviet Commander T just nodded, his aide gave the order, and the Hinds went abrams hunting. General Phil prayed to the gods of night and concealing buildings, but it wasn’t meant to be. No Abrams survived.

VADs moved into firing range…. (actually, this was an error. The VADs have 30 inches and the Hinds had fired so no spotting required.) General POTUS gave up 12 dice of fire and moved into a bad position, way to close to the infantry).

The VADS missed, bounced, or failed firepower and the Hinds flew off. Not wanting to be wasted on low value targets, they were only coming back if the second Abrams showed up. A motor rifle platoon for the Russians turned up with some arty. VADS started buring from BMPs and afgansty jumping from building to building like a Soviet spiderman.

General POTUS was screaming for his reserve… not true, more waxing lyrically while enjoying a glass of wine, still the situation was dire. Scout platoons and VADs poured fire into the Afgansty Centre for Excellence (they had renamed the building they were currently occupying) to no effect. The spigots were now set up and missile fire erupted from the building. More russians poured in from reserve and the USA back up simply refused to show. One by one the USA vehicles fell and the Soviet war machine pushed into Amsterdam. 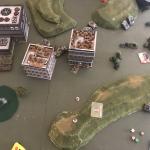 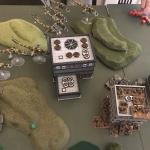 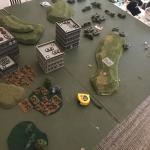