General POTUS was tasked with the immediate defence of Hanover. The Russian were pushing hard and the Americans had to move fast to counter them.

The General POTUS had heard of the Soviet Commander T, and all the reports mention his disdain for air and obsession with swarms of BMP-2’s. With this useful and no doubt accurate information, and with speed being a high concern General POTUS left the anti air assets behind.

The Russians were getting closer and General POTUS was running low on time. The Abrams gunned their engines and shot forward, beating the soviets to the battle field, having just enough time to conceal their presence and prepare to give the Soviets one hell of a surprise.

(As luck would have it, the photos have uploaded in reverse order.) Last pic shows the USA deployment, with two ambushes its only the HQ in sight.
Second last pic show Russian deployment.

General POTUS sat in his command vehicle. Afgantsy! Russian elite infantry. The worst part. Wherever there were Afgantsy, there were Hinds. As the sounds of rotor blades filled the air General POTUS manned the AA machine gun of his M113 and prepared to go down swinging. As the Hinds reduced his command vehicle to so much scrap mental the last thought to go through General POTUS mind was “gee, why didn’t I wait in reserve with the rest of the scouts……” (we actually didn’t realise that this was an option till after the game)

The 8 Abrams shot out of ambush to avenge their burning commander (though it turns out our plucky hero managed to escape through the bottom hatch of the M113 and was already making his way back towards friendly territory, thoughts of revenge in his plucky little singed heart.) Though anger had clouded the generally disciplined Abrams and both tank platoons failed to blitz, meaning the couldn’t get within the 8inch minimum missile range of the soviets.

2 soviet Storm missile tanks and some 5 BMP-2s exploded. The remaining Storm stayed around and took revenge(ish) a bailed an Abrams. BMP missile fire bailed another. Then the hinds came, .50 cal fire dropped two, the remaining 6 hinds bailed one abrams and destroyed another. The Afgansty platoon then polity asked the remaining three bailed out Abrams for their keys and let the crew know that they wouldn’t have to worry about parking the tanks any time soon.

Time was running out for the Americans. Afgansty were almost on one of the objectives and the scout platoons were nowhere to be seen. The Abrams destroyed another 3 BMPs and then charged into the motor rifle platoon… killing one. The motor rifle broke off, confident in the Hinds to finish the day.

The hinds destroy three more Abrams. The remaining Abrams passes moral, but with nothing in good order on the table the USA gave the order for a general retreat leaving Soviet commander T victorious. 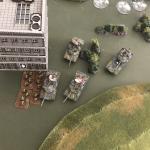 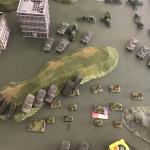 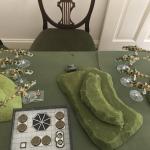 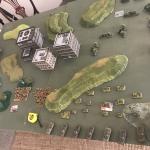 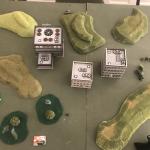