In the aftermath of General Leadgend's battle against General POTUS ( https://firestormstripes.warconsole.com/battles/leadgend-vs-general-potus-1522114138 ) a set of NATO codebooks were found in the destroyed US HQ and the surrendering americans revealed they were to be withdrawn soon, meeting up with British under General Darcy at a refuelling depot on the Austrian border. There was no time to lose. Sending a message to General Darcy that the US were on their way General Leadgend sent his forces dashing down the road westwards.

Caught in the open!

General Darcy had deployed the British on either side of the fuel depot with scattered mines in front. General Leadgend deployed missile launchers to clear the British tanks and surged forward with the tanks in the centre and infantry on the right. 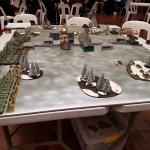 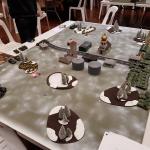 The British tanks quickly succumbed to the rain of missiles while the Czech tanks pushed forward up the road and Shilka AA tanks hosed the British infantry positions with accurate cannon fire. 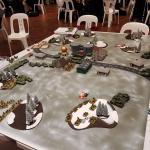 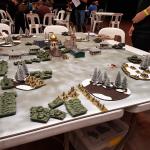 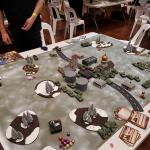 British infantry fired back at the Shilkas with milans and rocket launchers and with support from swingfires and the remaining tanks managed to destroy them but by then the Czech tanks and infantry were well into the British positions. 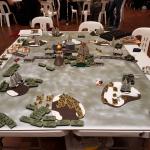 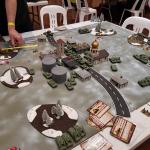 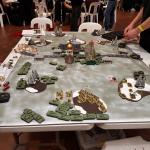 With their tanks gone, their AA heading for the hills and their infantry rapidly disappearing under a withering fire from the advancing Czechs General Darcy raised a white flag and surrendered! Victory was ours!

This battle was in round 4 of the Victorian Team Yankee championship at Conquest Games Convention ( conquest.asn.au ). I was running the tournament and as there was an even number of players wasn't getting to play, however General POTUS had to leave and couldn't make it back in time for the next round so I played his opponent General Darcy so he would get a game.