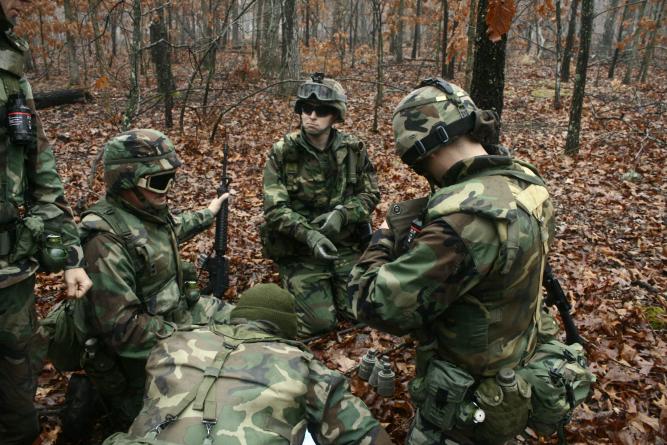 Butler and Schneider dropped back into the woods with the surviving elements of their initial recon efforts. The plan seemed to be working, as they'd drawn a main Soviet column away from reinforcing Frankfurt. That said, neither man could argue it had worked well. Butler had lost his M60s, and Schneider his forward Leo I elements. Camped out in the bush that night while the Soviets slept among the wrecks along the Lohrbach, they decided it was worth pressing one more time. This time, they would bring the big guns! 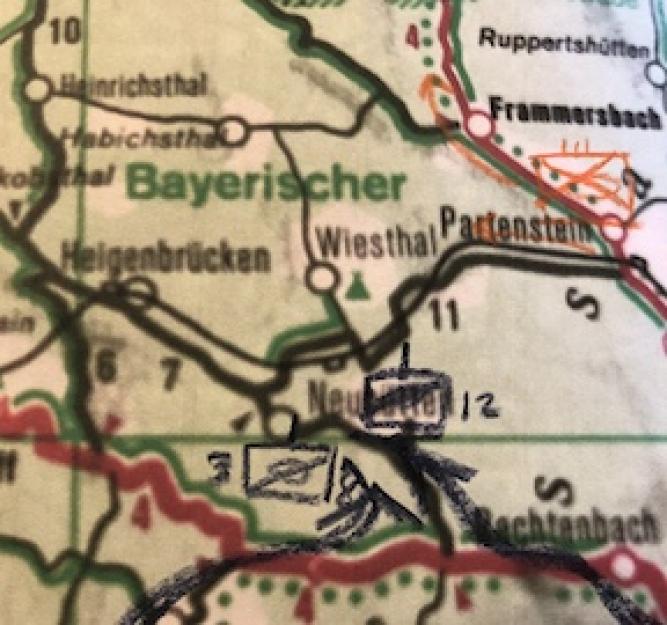 The NATO survivors didn't get much sleep that night. Down in the valley below, the Soviets were drinking from the beer wagon they had captured, and carousing all night long in celebration of their near victory. Schneider didn't mind the polka and accordions, but it drove Butler nuts.

When finally Butler did wake from a couple hours of accordion tormented sleep, he could see that the Soviets had fallen back to protect the 276, leaving the beer wagon in the valley to taunt him. He and Schneider agreed, however, that the Lohrbach heights would be key to their plan. Schneider had even arranged to have some mines deployed once the Soviets pulled out around 03:00. "While Ivan dances, Johann advances" Schneider declared. Liking this change in the ground, Butler agreed and they moved in. 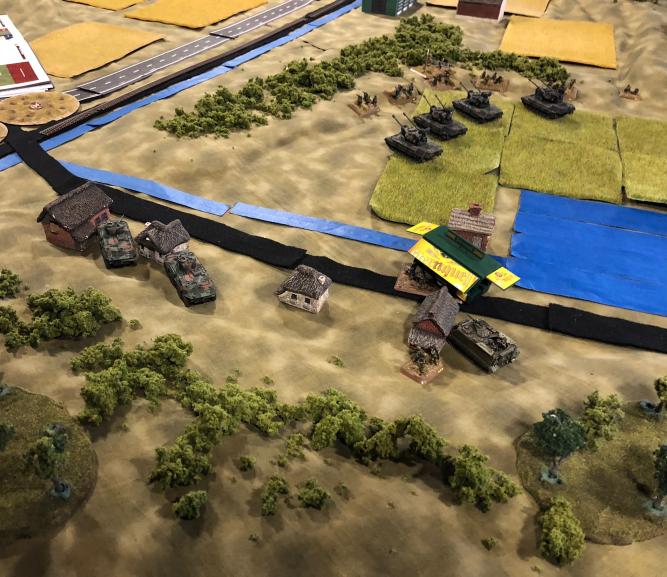 Butler was even able to advance some of his scouts up onto the heights above Wiesthal. The Soviets had pulled back a great deal, which was good, because with the exception of an M1 platoon, their promised heavy units were nowhere to be seen. They'd have to hold until the reserves arrived! Butler carefully hid the M1s to use when more forces could join them. 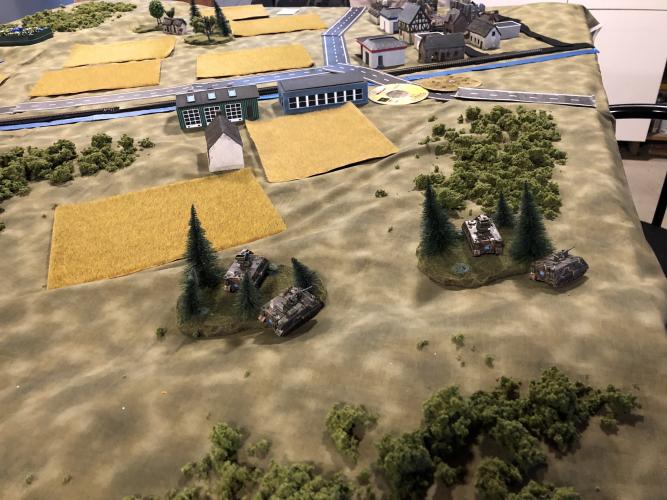 Meanwhile, Comrade Suvorov's Motor Riflemen had been sent up to battle German children armed with Panzerfausts in the streets of Hanau and Frankfurt. Though Suvorov had won a victory, Soviet Divisional command decided that the enemy recon in force had been costly enough that it merited diverting a Tank Regiment to make sure it posed no threats to communications as the rest of the Army secured Hamburg. As Butler's scouts crested the heights above Wiesthal, they radioed in a panic: "Soviet armored element bearing south at speed! Infantry has crossed the Lohrbach Industrial sector!" Butler replied: No Retreat! 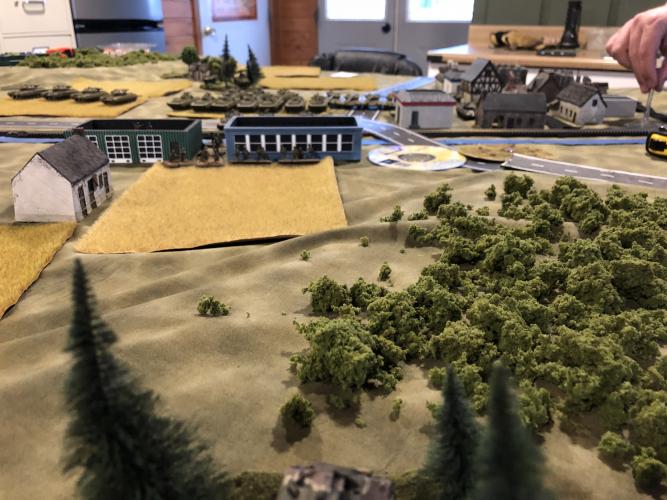 Brave Russian infantry led the charge from factory district, supported by their BMPs whose Spandrels managed to take out the ITV Scouts on overwatch despite their very well-concealed hides. Both ITVs burst into flames without ever firing a shot, and one scout fled. Only the sole survivor of Butler's scouts could watch the comedy unfold, as two whole companies of T-64s were held up in a traffic jam before one of Schneider's minefields. 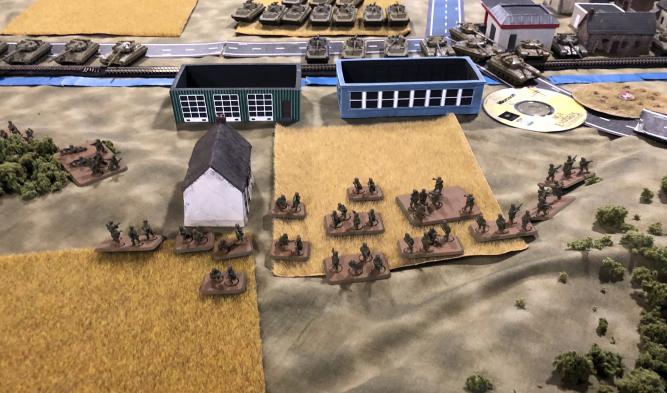 Why do Russian Infantry Run so Fast? Easy, They Want to Get Away!

The appearance of the Reds had clearly caught Butler by surprise. Schneider remained calm, informing Butler that Leo Is were "on the way." "Why the hell aren't the here?" Butler replied! Sensing his AirCav on the heights would be overrun if he waited, Butler sprang his M1 Ambush from the heights above their position on the Lohrbach heights. They were far enough away from the Russian BMPs, and under the cover of Schneider's Gepards, so it was a risk he was willing to take. His M1s scored six hits on the Russian T-64 flank company creeping down the railway embankment, but only bailed two. Maybe the risk hadn't been worth it? 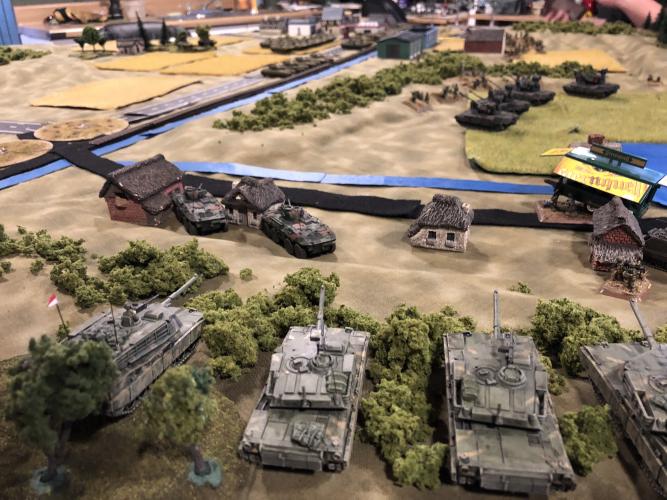 Long Range Fire? It's Not How Long You Make It, It's How You Make It Long!

Still stymied by the superior technology of the German minefields, the enemy T-64s opted to move out of Wiesthal, crossing railway embankment and Lohrbach creek with an incredible series of pass checks! Russian infantry took their cue, and rallied up to move west of factory district taking advantage of the reverse slope of the Lohrbach heights for cover from Schneider's Gepards, who would have bigger things to worry about regardless as enemy Hinds were on the prowl. 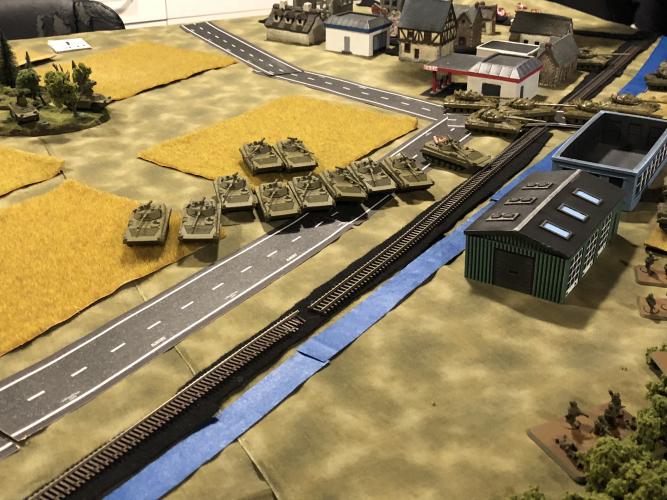 The enemy focused to the west of the Lohrbach, however. Their T-64s mounted back up, and suddenly the BMPs managed to lurch forward with a successful blitz order. Yeah, that's right, BMPs blitzed! All told, however, the Russians only managed to bail two M1s. Butler was not worried! 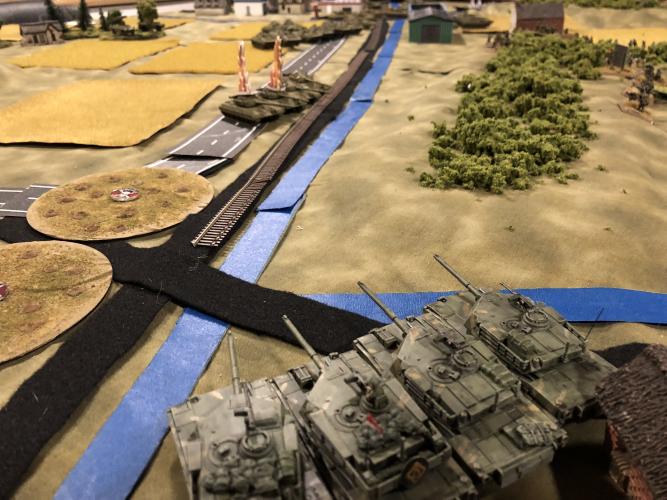 Butler's crews managed to remount quickly, drop down off the heights and fired off an excellent volley burning two T-64s and bailing another. "That's training!" he said to himself. He lit his cigar when he saw the survivor run off. Schneider took advantage of the lull on the Lohrbach to prepare for the assault he knew was coming. He had no choice. His Reserves still hadn't arrived (seriously, I don't know what it is with me and Reserves!)

Despite the loss of an armored flank company, the Russians were not deterred. Their Hinds swung west, now finally deciding to risk the Gepards flak in order to deal with the M1s. One Hind downed to one burning M1 and one bailed M1 was probably a fair choice given the Hinds largely survived ALL 20 of the Gepards' shots. With attention drawn to the west, it was now time for the other Russian T-64 to move past minefield near Wiesthal. While the Russian Infantry Russian assault finally rolled over the Lohrbach heights. It was a near run thing, but the well position support from the West Germans helped the American AirCav "riflemen" to push the Russians back with nearly 40% casualties! 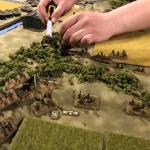 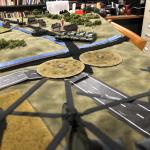 With the Russian infantry falling back, things were starting to look up. Just then, Schneider received contact from a Platoon of Leopard 2s and a platoon of Leopard 1s arriving from the south. He ordered the Leopard 2s down into the valley to engage the T-64s rushing along the heights to support their infantry. Sadly, they could only knock out a single tank. But Schneider had a plan. While the T-64s would be sweating his Leopard 2s, the Leopard 1s moved to put a check on the T-64s by rushing at their flanks at top speed. They couldn't quite reach engagement positions this turn, but the Russians would have to make a choice.

Butler's men, too, were suddenly having a field day from atop the west edge of the Lohrbach heights, lighting up 5 of the enemies BMPs, almost (but not quite) enough to break the unit. 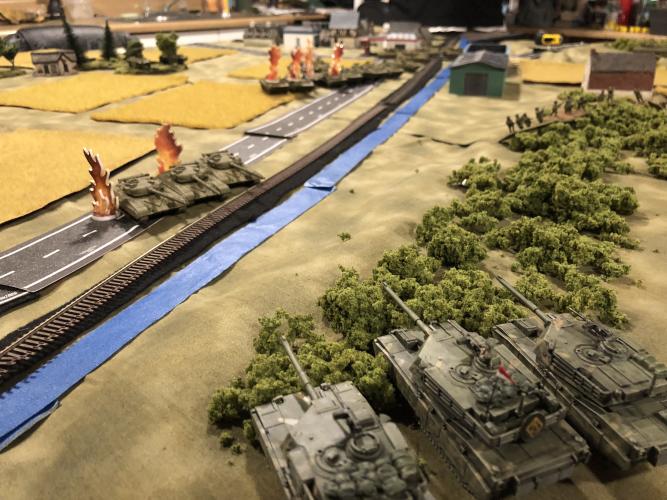 In what seemed a peculiar move, the Hinds flew off to the southeast to chase the Leopard 1s on the heights there, but had little effect. Perhaps the Russian commander was addled by the threat of a flank move. Butler heaved a sigh of relief, only to have it shattered by a few lucky volleys into his M1s from the last of the BMPs. One burned, one bailed, and the unit fled. Schneider has a very similar down turn as ANOTHER company of T-64 finally made it through the minefield. Joining the others on the heights, they were able to knock out his Leopard 2s almost as soon as they had arrived. So much for "heavies," they would now have to win with his Leopard 1s. 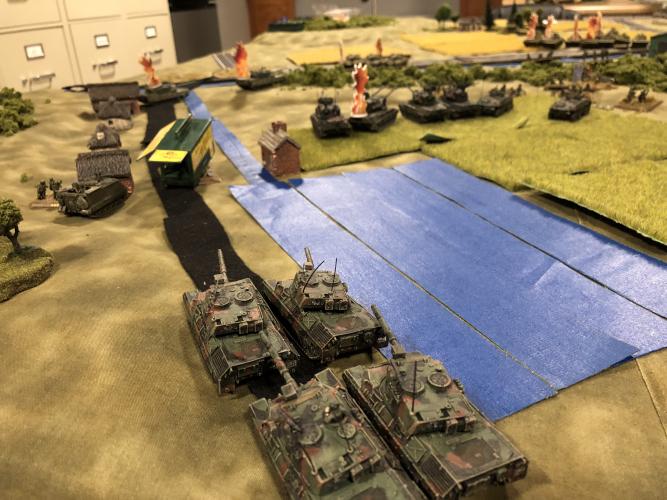 The Last of Schneider's Leopards

Schneider gunned his command tank, and brought on his last platoon of Leopard 1s to take the position of the M1s. If he could get his Gepards up on the Lohrbach heights and finish the BMPs, the way to Wiesthal would be clear and he could hit the T-64s from both sides while his AirCav Rifles and the German Luchs chewed up the remainder of the Russian infantry.

Schneider's Gepards took to the heights and did indeed kill several BMPs, but still not enough to break them (WTH?). His Leopard 1s on the heights remounted and raced as fast as they could into the rear of the enemy T-64s hoping for shots next turn, and his Luchs engaged, though unsuccessfully, to take out the BMP scouts driving on Butler's AirCav Rifles. The action was getting hot and heavy, even with only light troops. 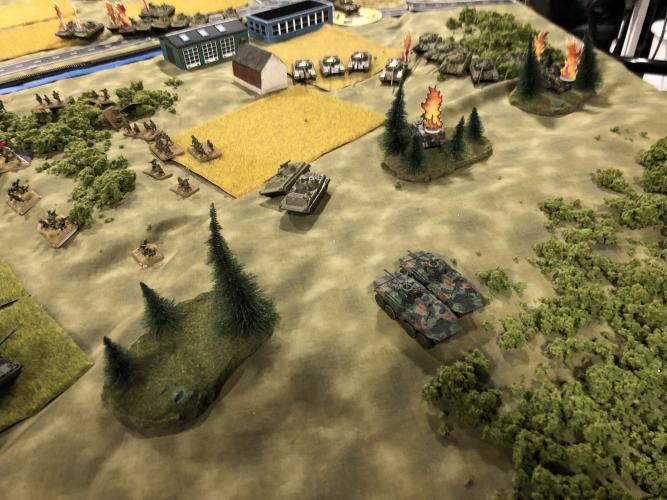 Taking no chances, the Russians put everything they had on the poor Leopard 1s in their rear. It turned out to be a good thing. The Hinds missed every shot they took, so it was the T-64s on heights turn to eliminate them. One flank had been cut off. Again, the last few Spandrels came flying out of the BMP survivors, and rolled well enough to take out the brave Gepards who had pounded them last turn. Enemy BMP scouts struggled to take on the Luchs that had surrounded them, but killed only one 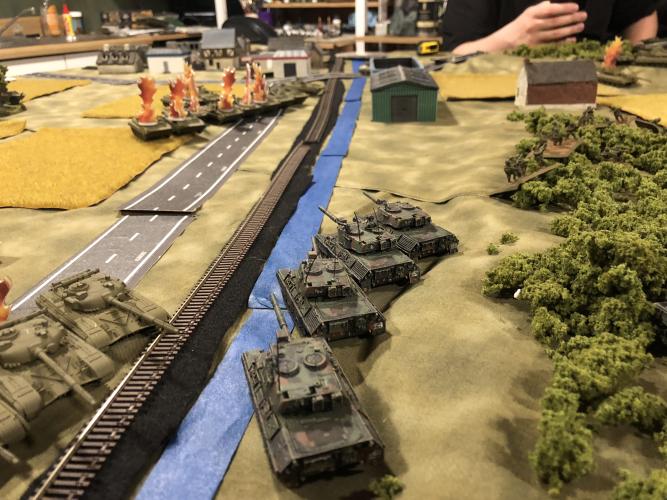 More Lynx arrived from the south to swarm and kill the enemy scouts, but Schneider was now outnumbered 2:1, and facing T-64s! His last chance was to blitz up the north side of the Lohrbach heights, killing the BMPs in the process and hitting the Russians on the flank from the Wiesthal industrial district. It was a good plan, and he did manage to kill a single BMP while bailing two others. And YET they stayed on the field!

Schneider watched the absurdity of it all! The Russian BMPs remounted in the face of overwhelming odds, and launched yet another volley of spandrels. One of his Leopard 1s burned. The Hinds were back, too, allowing the Russian to kill another of Schneider's Leopard 1s and bailing his and the last surviving tank.

Now outside his track, he could hear the cheers of Russian infantry charging Butler's AirCav Rifles with tank support. It was all too much! The Americans drove off the tanks, but succumbed under the pressure of the infantry assault. The Russians even managed to capture the two Luchs providing support.

Watching it all, Butler knew he had no choice but to head back south. He slammed a Phil Collins cassette into the deck he'd rigged in his APC, and sped off, hoping to leave the sounds of Russian polka behind.

This one was so close I could taste it, but the loss of the Gepards at just the right time was too much. Not sure which I hate more as a West German player, the T-64s or the Hinds, but at least I finally found something that can reliably kill T-64s even from the front. The M1s were fun to play, just need to remember they run away a little easier than the Germans do. I end the campaign with a lousy 1-7 record (away next weekend), but as this final photo shows, had fun doing it, win or lose! 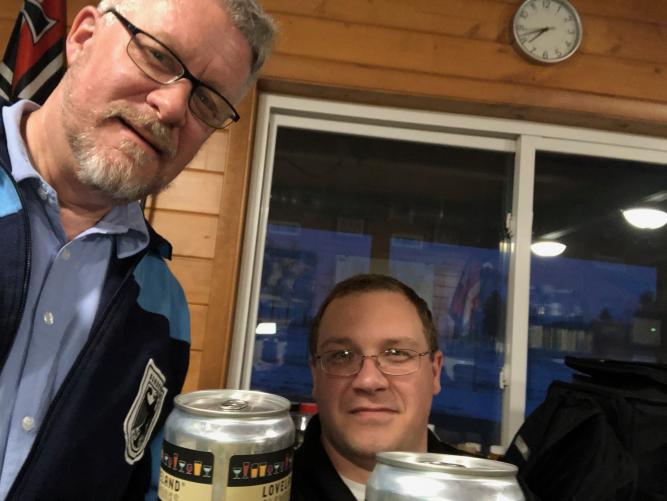