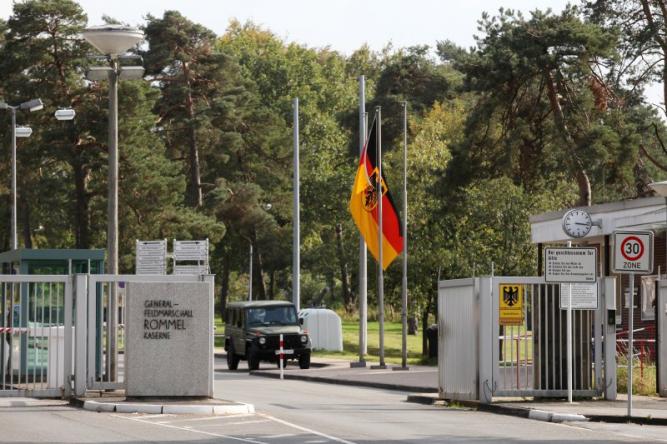 Then, on a September morning in 1985, weeks into the war, the order came. Hauptman Martin Walthemathe received orders that they were to mount up, and head east. They would use what was left of existing rail lines to move not just to the front, but deep into the Hanover pocket where they would deploy, and leap across the IGB to join the USMC from Hamburg in some of the first German Actions East of the Inter-German Border. Panzern greift an, indeed! Rommel would be proud.

Marlen Grote covered the story of these brave Frontsoldaten for the BMVg.

Hpm. Walthemathe would lead from the front with a tailored force: some of his own Leopard 2s sporting the colors of the old 5. Ulanen, and 3. and 8. Hussarn, yes, but also the better part of the 7. Panzerdivision’s Panzeraufklärungsausbildungskomapnie 3/7, also from the Rommel-Kaserne. They were some of the best, and had trained many a man who had already fallen. They’d be backed up by air support from NORTHAG, and the fine men of Flugabwehrregiment 7 in their Gepards. They’d be sending more than roses to the east! 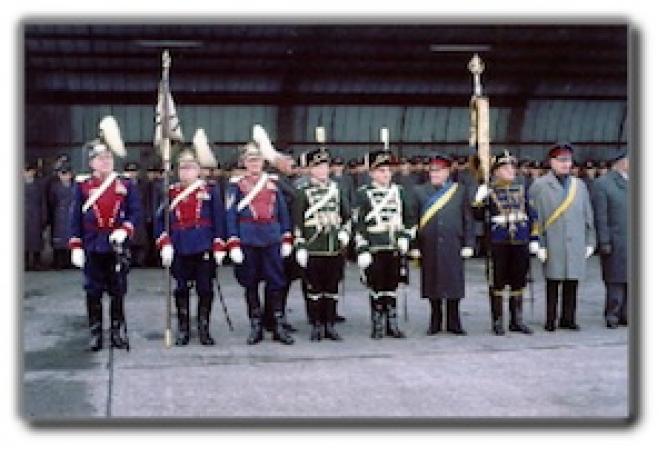 The train ride was precarious, and took two days rather than the usual two hours to reach the disembarkation point at Uelzen. Thank goodness for the AA support from the BAOR along the way! The town was a ruin, but they were greeted by the cheers of BAOR garrison forces there, who were eager to see some fresh faces (even if German). From here, Walthermate was given his orders: Operation “Rommel’s Revenge is ordered to Recon in force along the 191 toward Ludwigslust and the key intersection with Highway 14. Engage enemy in vicinity of the intersection, and hold for follow on forces from Panzerdivision 7. 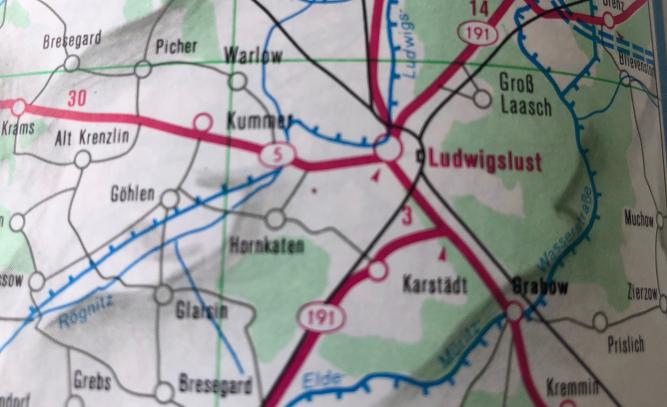 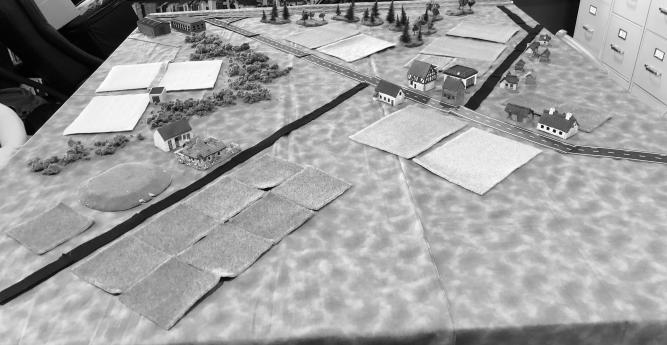 Waltermathe sent his PzAufkl ahead toward the 14 under the command of Leutnant Ludwig Beyer, with his Panzers and infantry support moving northwest toward the quarry where the Russians were reportedly bivouaced. Discovering enemy forces of the 14th Guards Tank Motor Rifle Division (Yelnya) , he ordered Beyer to pull back, and engaged with his main element supported by the 3/7s Leopard Is. It would be a real brawl! 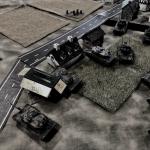 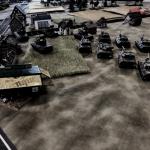 As he began to deploy his forces in the dim light of early dawn, Beyer saw what looked to be Russian Motor Infantry moving down the 14 with Recon support of their own, entering the woods to guard the highway. Waltemathe could see nothing of the tank forces rumoured to be ahead, but proceeded cautiously. 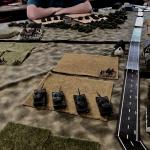 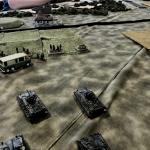 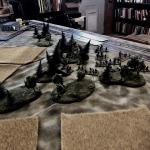 Unconcerned by the presence of the infantry in the woods, Beyer urged his men to go for the highway, and they moved out at full speed hoping the cover of darkness would last! Waltemathe considered the same, but he knew there had to be a Russian armored unit out there, and so he let his infantry settle in before proceeding. 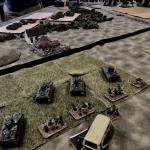 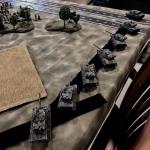 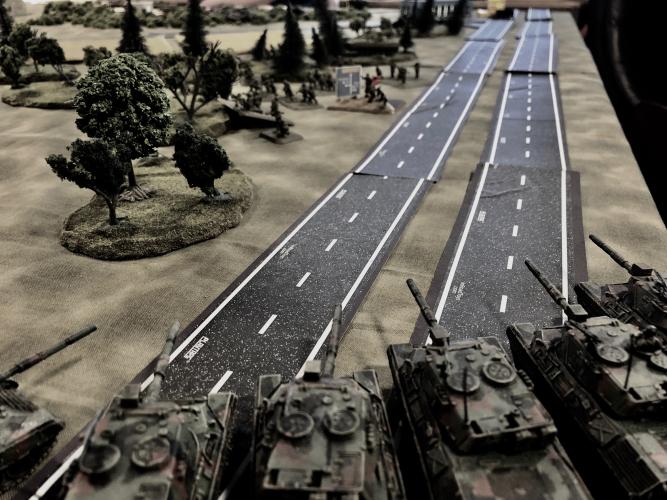 The Russians in the woods before Beyer dug in when his tanks turned their corner, but the Russians elsewhere would not reveal themselves from their dark hiding places. Beyer, held fast, and used the dawn to open up on the Russian Recon vehicles he could see along with infantry on the edge of the woods. Waltemathe, too, could see BMPs in the heather covered low rise to the north as he moved up along the outskirts of Karstadt. The first flames lit up the night! 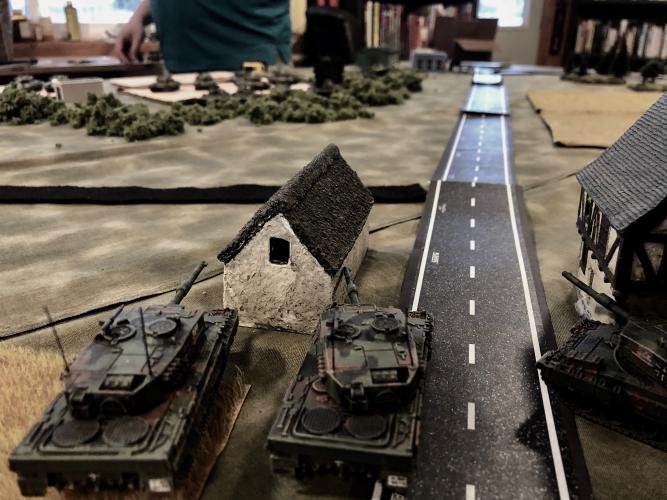 Waltemathe Draws First Blood, But Is It Enough?

With the dawn (and yes, it was a tinge Red), the Russians finally revealed themselves. Reserve tanks appeared on the H14 at intersection and rolled down to engage Beyer's PzAufklr, but with little effect. Far more concerning, the enemy now revealed their main force, emerging from the Karstadt Quarry and opening on the Waltemathe's Panzers with devastating fire! No one would be saved from the wrecks! 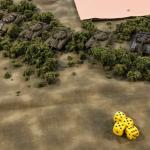 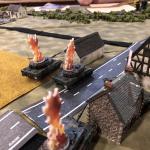 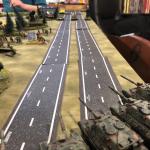 But all was not lost. Beyer kept his wits about him and hit the T-64s in his way with everything he had. He was outmatched, but one hit burned and another bailed his foe. It was just then, that he heard the chatter on the Aviation nets. The Gepards were moving to engage the Russian BMPs, and Tornados were overhead! Huzzah for the Luftwaffe! 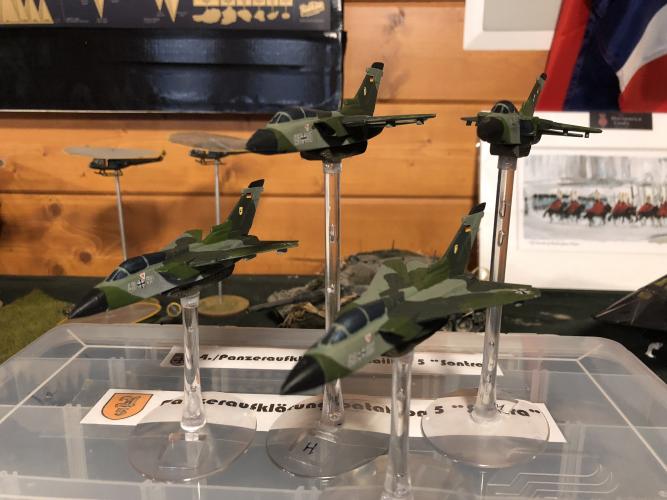 Huzzah for the Luftwaffe!

But Russian reinformcements were also swarming out of the quarry, and the skies. While their panzers rushed forward, their Hinds rushed to engage Waltemathe's Panzergrenadiere in the fields northeast of Karstadt. Suddenly, the battle was in the air! The Hinds ripped into the men of the Panzergrenadiere, while the Gepards returned the favor, hitting every BMP they shot at, though this time not fatally. Meanwhile, the roar of the Tornadoes streaked across Karstadt dropping bomblets on all five tanks in the company that was making its way in to town. Again, all were hit, but not all burned. Beyer sensed he needed more. 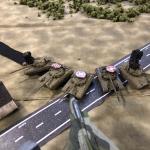 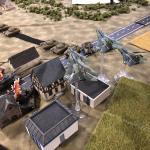 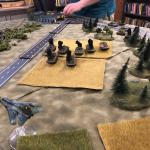 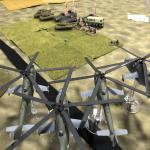 In the end, Beyer's judgement proved fatal. The flyboys flew off, Beyer and the last of this PzAufkl Leo Is were caught by some lucky shots from the surviving T-64s and accompanying infantry, and the last of Waltemathe's men went down in a brutal back and forth assault lasting several rounds against the remaining T-64s. "Rommel's Revenge" was failing, and it was time to save what they could for another attempt. 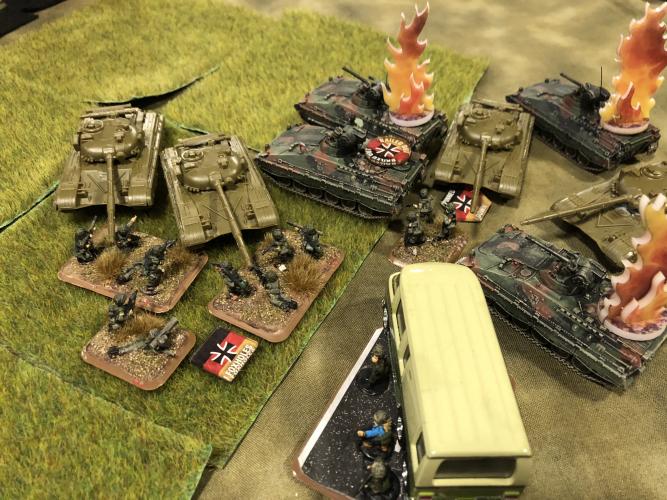 Feldwebel Braun wasn't sure where his commanders went wrong. Maybe it was the cautious movement of Waltemathe in the dark, or maybe it was Beyer's brash attempt to turn the Russian defenses on the 14 in hopes of running all the way to Ludwigslust. He would have a lot to think about tonight, but mostly, he was thankful to escape this bloody battle with his life when so few others did.