FTX in Frankfurt - Where is Red?

After our FTX in Leipzig with West German Commander Oberst Hunts, and not seeing any RED in the area we decided to take a nice ride to Frankfurt in hope to find the enemy. We took a short cut through Fulda Gap and enjoyed the country side and once again no RED could be found. Many abandoned vehicles and driving down the highway you can clearly see the enemy is running out of fuel and supplies and abandon the area running to Hanover and HOF.

When we arrived in Frankfurt, once again our scouts reported back there was no enemy in sight.

Once again, Commander Hunts and I decided to pull out our MILES Gear and have a Field Exercise. Our second FTX in areas RED claims to have control but nowhere to be found.

During our first FTX I jumped on our supply officer to test our MILES Gear since I felt they were not working correctly rolling 1’s. I was assured all our equipment has been tested and in working condition.

I wanted to change up my list and try out the Armored Calvary to see how they would perform. This would be the first time I tried this list. Since my M60’s were still in transit, I had my supply Officer adjust our Miles Gear for my M1s to M60’s settings. So when you see in the photos M1s running around, rest assured, the settings on our gear was programmed for M60’s. 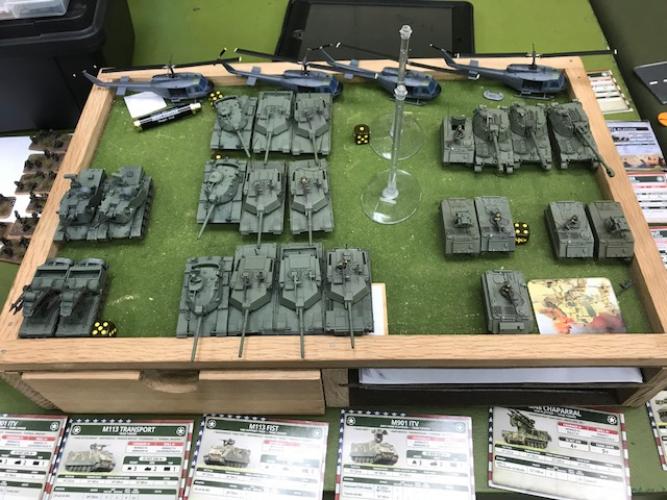 Frankfurt Counter Attack and I was playing the Warsaw Pact for Mission Play.

Battle Plan: Aggressive push forward on my Reserve side of the board to take the objective before immediate reserves can make it across the table.

I deployed two platoons of M60s to spearhead straight towards the objective, x2Sgt Yorks, and Arty. Of Course my immediate Reserve will quickly follow. Well I once again, my immediate reserves were still on liberty. My M60’s were very successful on turn one to open a path in front of me with the objective in sight and clear a path on the right flank.

No guts, no glory.

Well, I quickly learned the difference between the front armor from a M1 and a M60. But did give my troops bullet proof cover behind them.. LOL

Commander Hunts does not allow liberty for his reserves. So of course they were on time and started to rush my weak left flank. My Scouts had no chance. They were quickly surrounded and heavly pushing my left flank looking for my Arty.

Commander Hunt should have been in the AF as his Aircraft decided to show up on demand. Only having two Sgt Works and then finding out M60s do not have AA, I had to face palm myself and knew at this time the Sky belonged to the West Germans.

This was the second time I brought Sgt York to the table. I have not had much luck or the MILES gear is flawed on this equipment. Not too smart of me to only bring two. Found that Sgt York’s on the table are bullet magnets and have not lasted too long in the game.

My two pilots finally made it out of the Officers Club and went for a high risk, high reward mission to go after Commander Hunts AA. Coming in cover hitting on 5’s, what the heck. Well it high risk, low reward. I took out one Gepard and he took out a Harrier. I did pass morale.

The left flank object was open. With all my attacks on the Right Flank, this was my chance to fly in my Air Cav to an empty LZ. Lessons learned from the previous FTX, you need to land far enough away so the enemy cannot get closer than 4” or you be forced to fly away. I landed safely and our troops all said a prayer that Commander Hunt Reserves were all on liberty. No Such luck and of course this empty objective was on his reserve side. Two fives are rolled so two Platoons waved at us as they rolled in.

I lost three Helos but my passenger saves allowed the Air Cav boots on the ground. I just need to get on the objective and dig in.

Commanders Hunts Tornados continued to come and go unharmed and focusing on my M60s and being very successful. The Spearhead to the right flank has halted.

Marders rolled in to the Air Cav and once again I rolled very well on infantry saves. The Air Cav Assaults the wounded platoon and takes them is now on the objective. Still surrounded, I need to the dice goods to save my troops.

My right flank has collapsed and forced to start direct fire with Arty. They were way to close and missed. My Arty is now in direct fire and down one M109.

The Air Calvary is now completely surrounded and after a full handful of dice, Commander Hunt, eliminates the entire platoon. The objective is now under Western German Control.

With a limited US force remaining, and the West Germans Infantry sitting and drinking on the Left Flank Objective, I had no troops close enough to take the objective before the end of the 6th turn.
West Germans Win.

Our scouts return and still no sight of RED in the area. Our troops gathered once again to discuss lessons learned.

Never take x2 of anything……

M60’s are not M1s and should not be aggressive.

The Supply Officer was demoted to handing our basket balls for MWR as I still believe the MILES Gear rolling ones with a 2+ Firepower something is wrong with the equipment.

We all had a drink and scratch our head wondering were RED is? 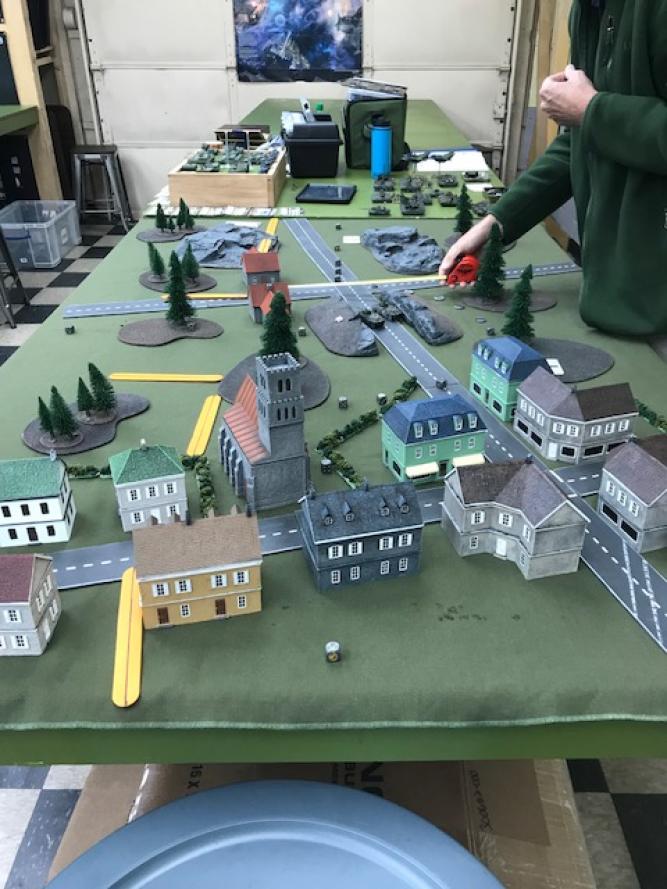 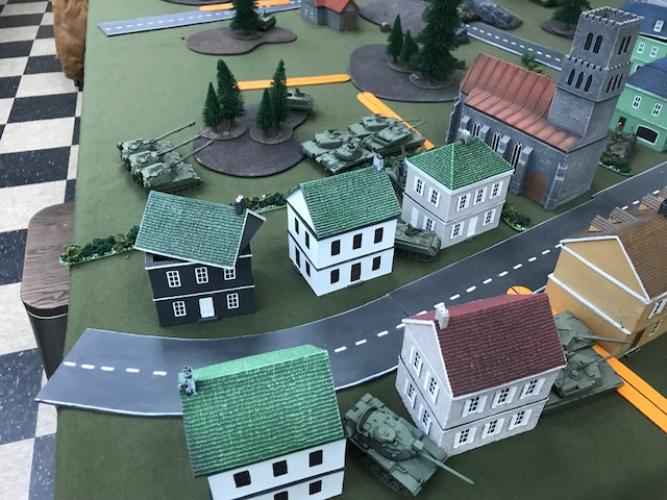 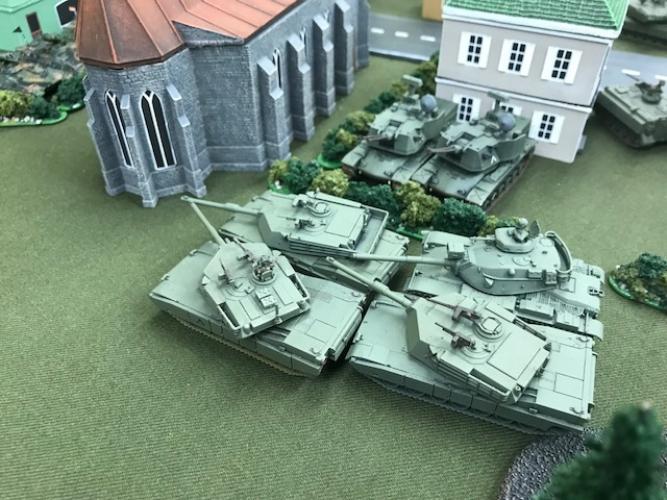 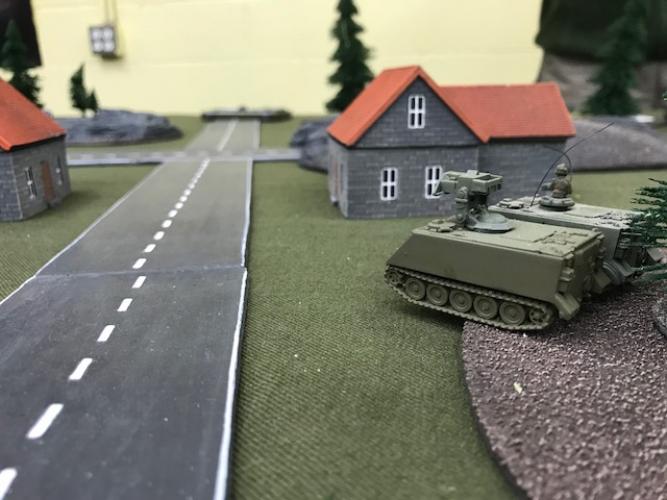 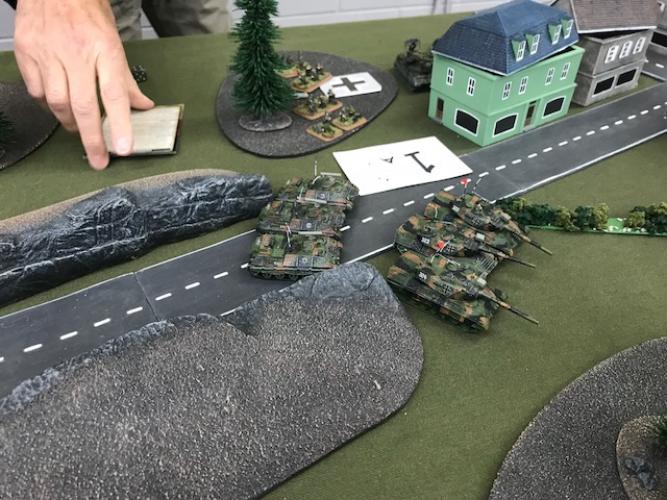 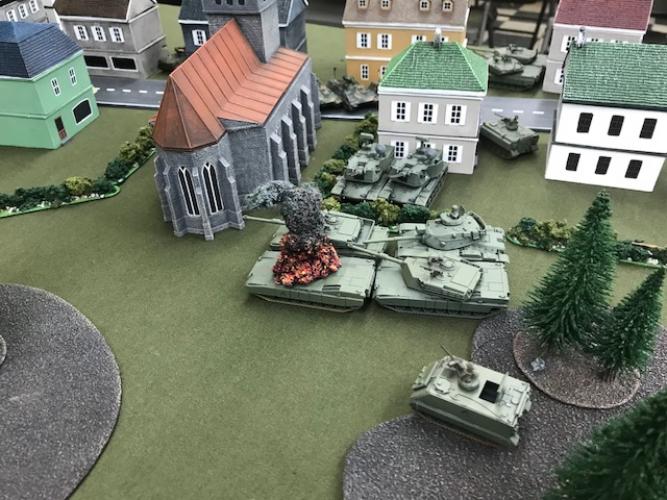 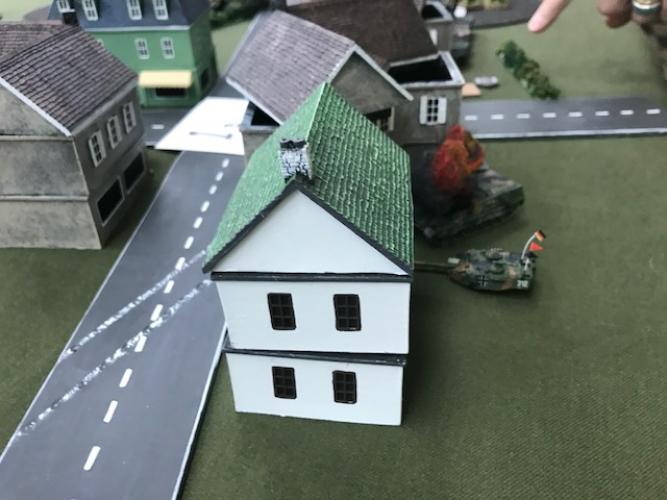 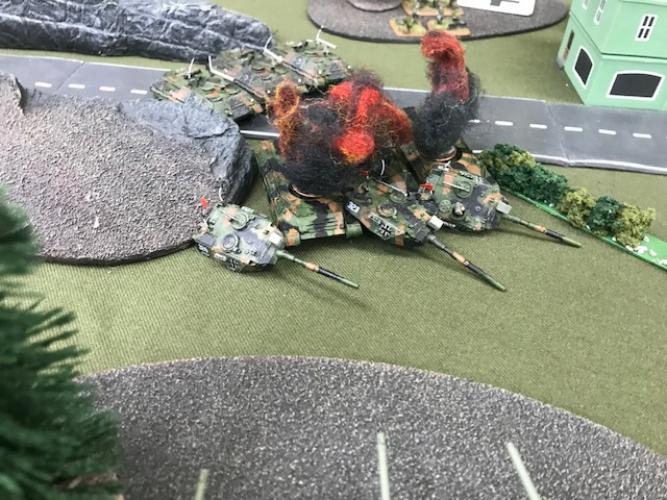 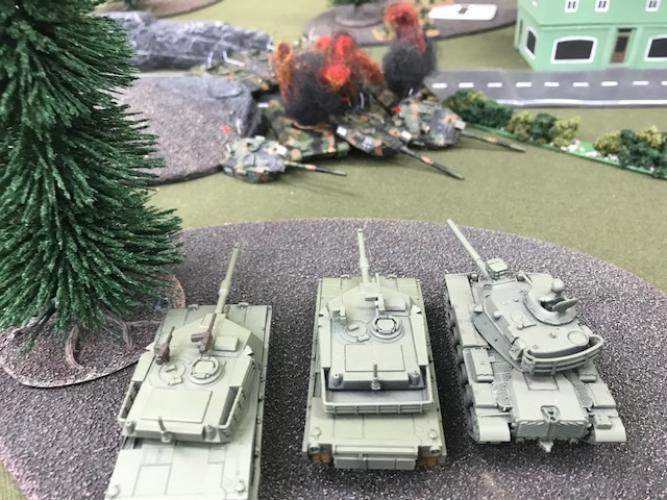 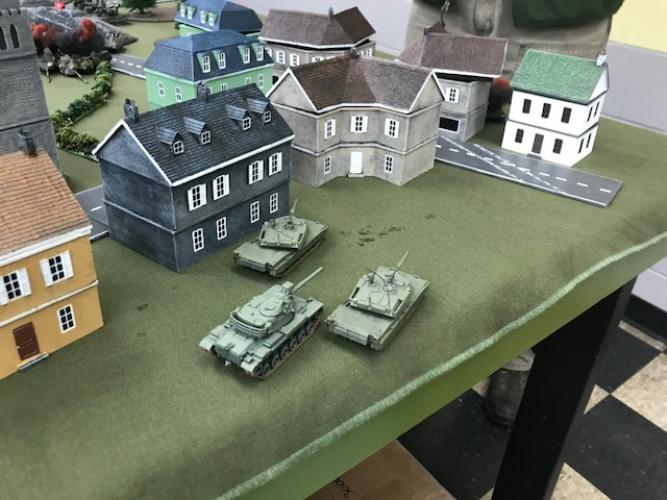 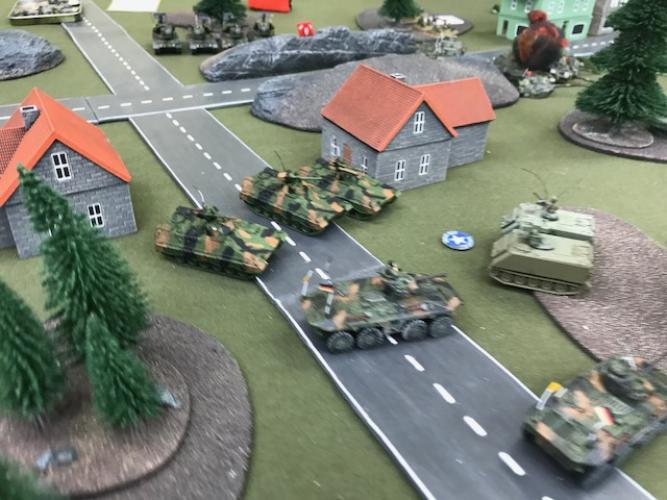 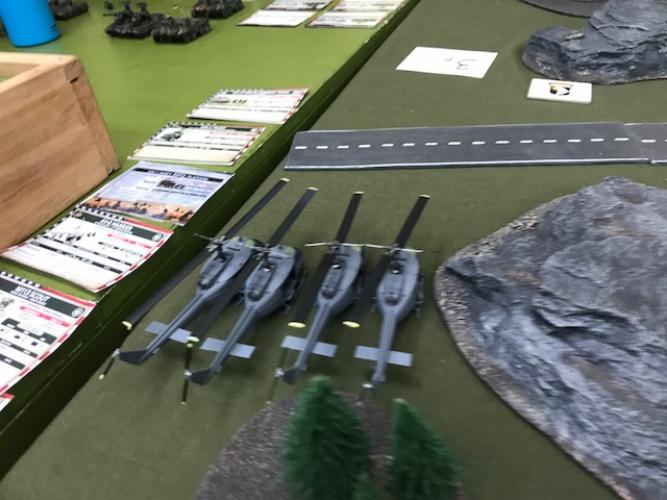 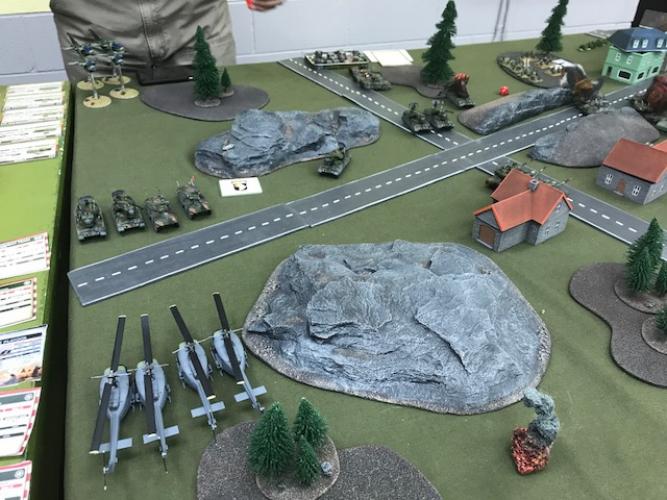 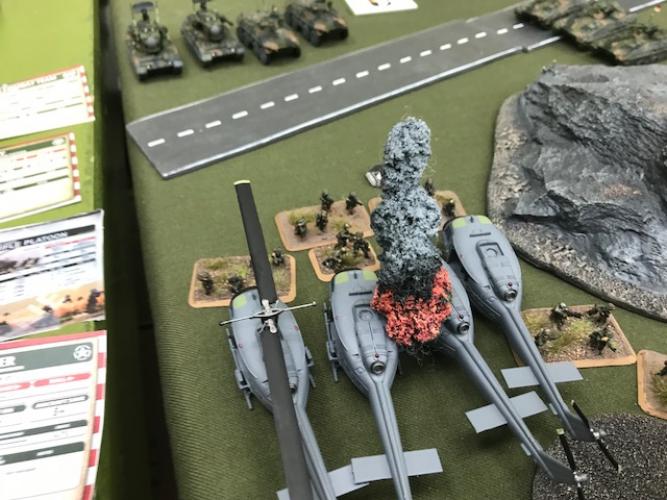 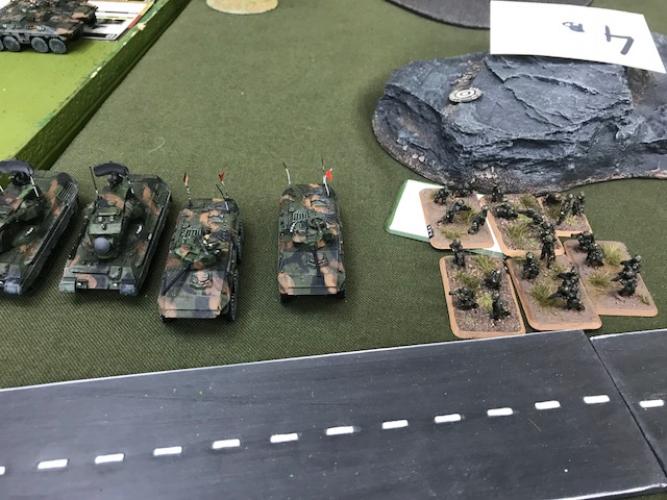 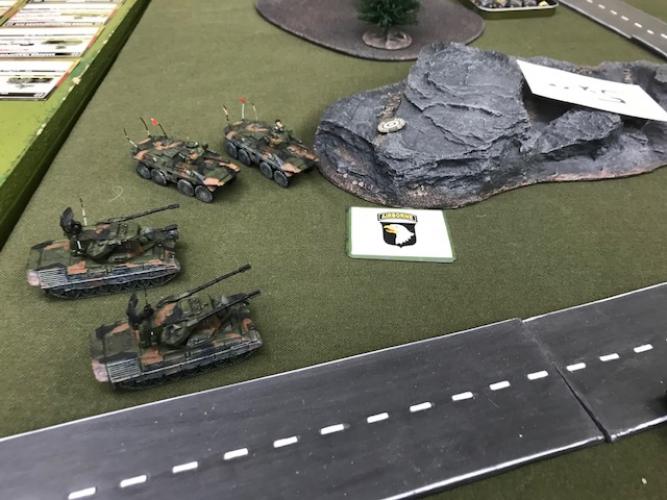 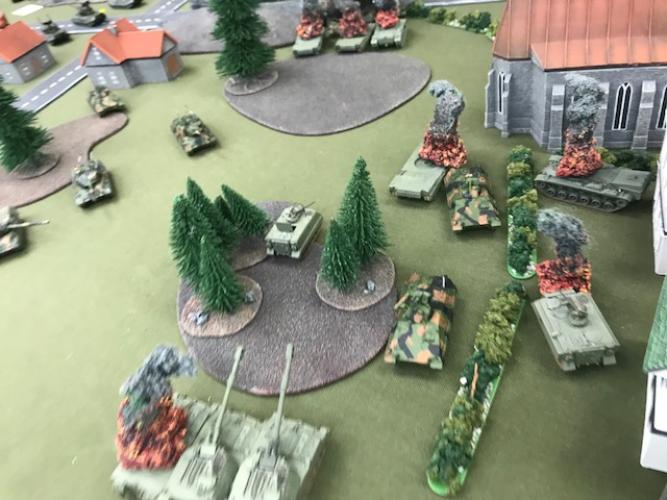 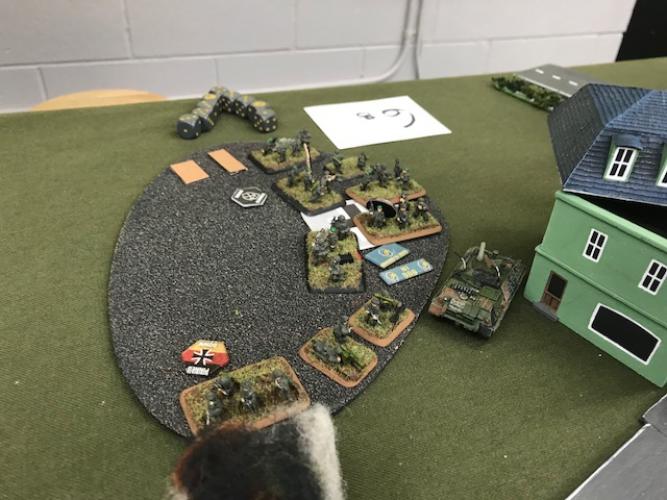 My second lost during our last two FTX engagements. Hats off to the West German High Command for training their Commanders. As the US Commander It would be politically incorrect and cause diplomatic tension if I would have won. LOL GO NATO!

Don't forget, I am buying the first round in Berlin.