The US send scouts into Leipzig and reported back there was no Red Forces in town. Where are they? Our scouts easily drove to the center of town and started talking with the locals. “The Russians left in a hurry and they were very nervous” one of the locals told Sgt Downing. As the US Commander, I gathered my officers and our West German Commander joining us. I recommended we have a FTX with our Allies in the middle of Leipzig, and in the face of our enemy to showcase our firepower and show the locals, that NATO is here to stay and they no longer have to worry about WARSAW PACT returning to their town.

Our West German Commander agreed and laughed. “Looks like you will be buying that first round in Berlin shortly”. I better find an ATM to get more cash as there will be plenty of beer to drink.

In the middle of the night, our troops pulled out and put on their MILES gear for the training exercise. We sent out a few scouts on the outskirts of town to watch our flank just in case the Russians were hiding on the outside of town.

As a Commander of Mech Combat team and typically in command of Infantry and boots on the ground, I was excited that we received new troops and welcomed a split formation adding the Armored Calvary under my command. What a great opportunity to test their abilities and with my Infantry. 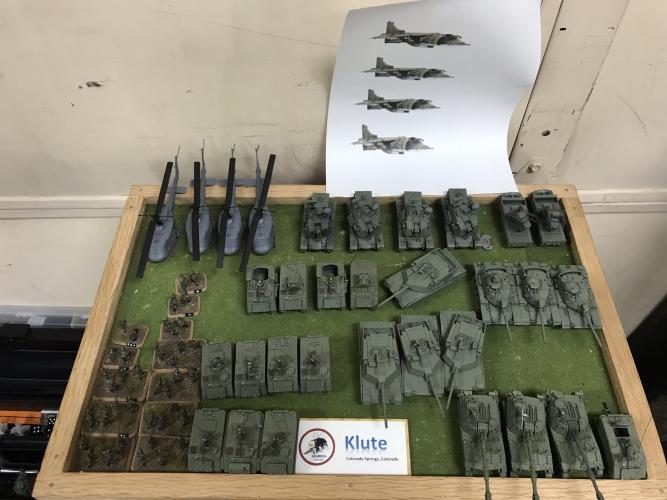 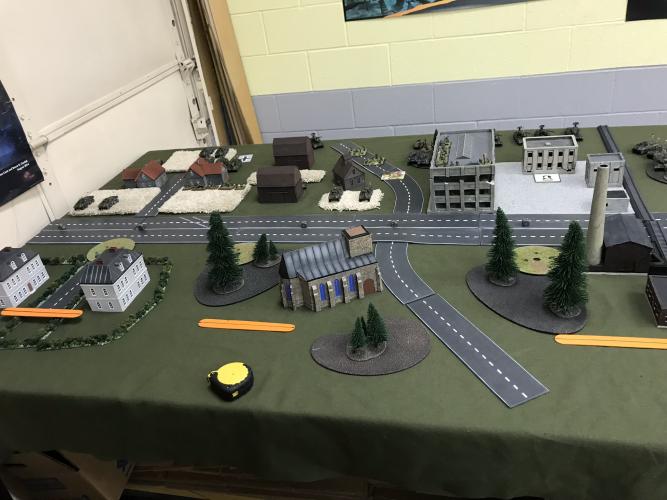 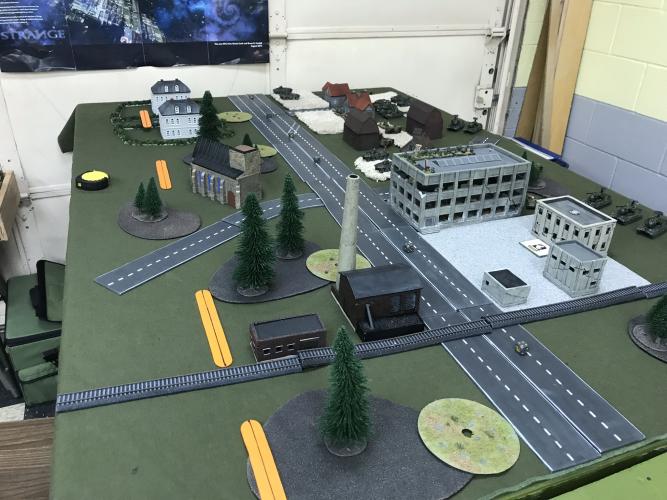 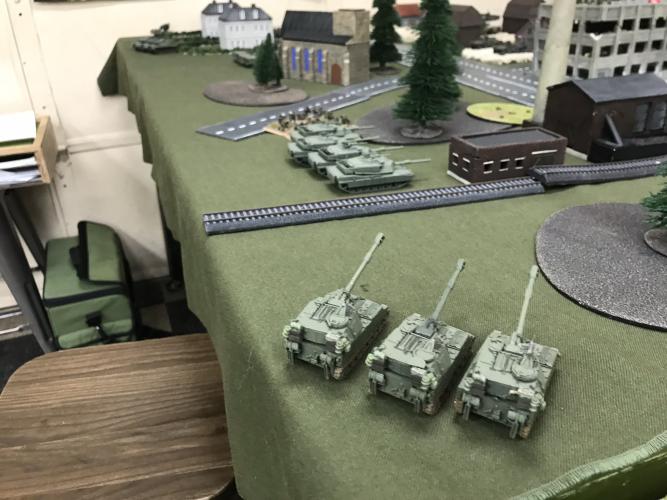 US Deployment to the Left. Spread across the country side with my Air Cav Loitering and Harrier strike force on standby flying around the area. 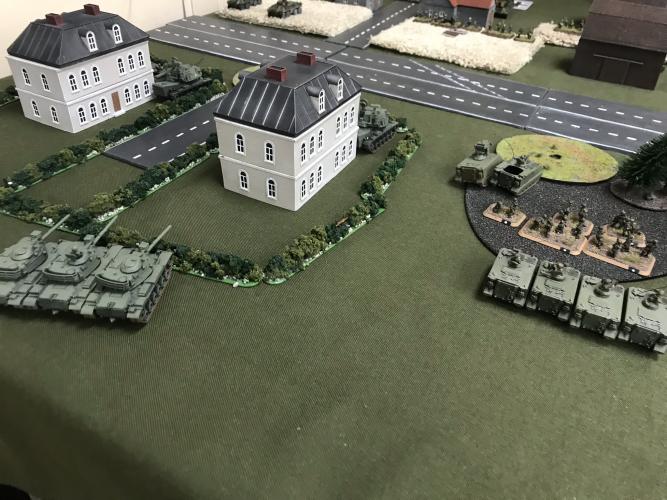 M60s are deployed in the rear awaiting orders. 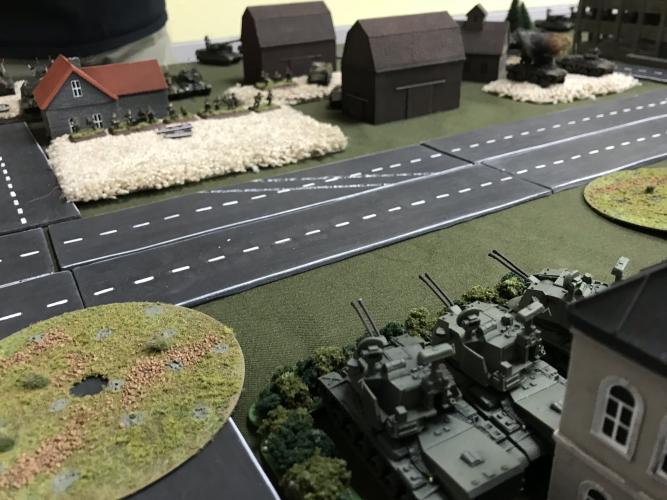 As the US Commander I have connections. I was able to obtain a new SGT. Welcome SGT York.

The Battle Plan: Take out the AA threat and turn it over to the Air Calvary.

The West Germans were ready for Air and brought plenty of AA Support. They deployed across the board, and I need to create a soft spot on an objective. Knowing later in the game my opponent will be pulling off objectives, I focused on the permanent objective (Left Flank). This was my goal and orders provided to my Commanders.

On the first turn, I did not advance and opened fire with Sgt York, dropped bomblets on the enemy stacked by the main objective, keeping my M1s and M60s to rear, waiting to see how aggressive the West Germans would be.

The West Germans took advantage of shooting at night to focus on my Sgt Yorks. They made it through the first turn, put paid the price on the second turn.

My Fist Platoon was awarded medals for rolling 6’s at night and calling in Laser Guided Projectiles through the game.

Our M1s easily destroyed the approaching LEO 1 Platoons, but then was ambushed on the Right Flank with 3 LEO 2s. Destroying one, and then later being hit by Milians destroying an M1 and Bail causing a failed morale check. Deploying my M1s on the opposite side of my main objective worked having the LEO 2s ambush arrive far from the objective.

I started to push forward with my M113s and M60s and focusing on taking out the AA Threat. The West Germans kept pushing forward and took out my Scout Platoons and started to move in my infantry in the woods.

Don’t under value the M113s. The M113s started the push forward towards the Main objective and 50 cals started to clear the path taking out the LEO1s.

Slowing picking off AA Assets, it was time to call in Air Support. A risky mission, the Harriers were called in for a SALVO Cluster on the main AA threat and redeployed tanks moving towards the Main objective. We lost a pilot, but the strikes were successful reducing the AA threat. The Air Cav is now loading up and queued up “Ride of the Valkyries” for their flight into battle.

We dropped smoke to the right flank and our Air Calvary landed and opened fire with their Door gunners on the dug in infantry. Unable to pin them. I kept the push to right flank to open a LZ for the Air Calvary. My Green M60 Commander was not able to pin the infantry and made a poor decision to assault. This did not work and lost the Platoon.

The Air Cav landed an undercover of smoke. We can see the Objective.

The failure to pin and remove the surrounding infantry allowed the West Germans to advance within 4” of my landed Helos and they had to fly away.

After hours of training, the US failed to be meet the objective and victory to our NATO Allies.
A great joint FTX for NATO. We took off our MILES gear and all found a watering hole and discussed our lessons learned.

Being new to Air Cav and Air Support, I should have deployed my Air Cav earlier in the game and taking a higher risk of utilizing air support from the start of the game. My Green M60 Commander will never make the mistake of assaulting instead of moving forward to the objective to clear the path for the air Cav.

I did order my Supply Officer to inspect our Miles Gear. I am almost positive some our gear was not working correctly rolling ones.

Our Scouts returned from the outskirts of the town, and reported no enemy troops in sight. 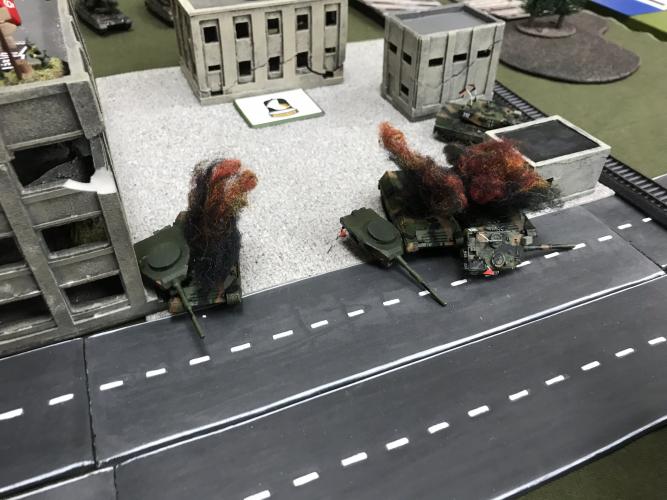 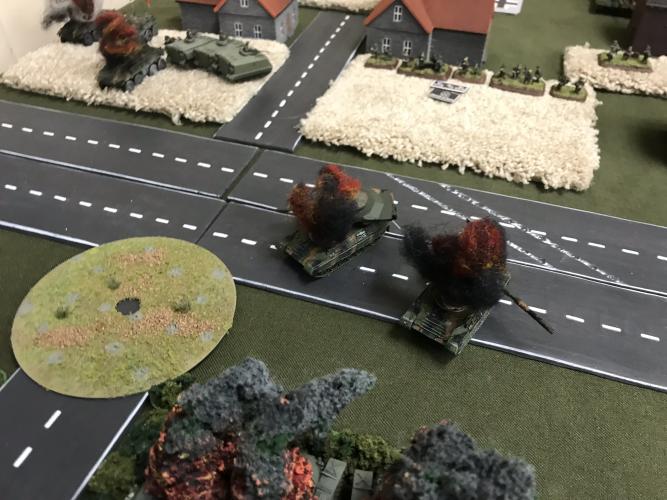 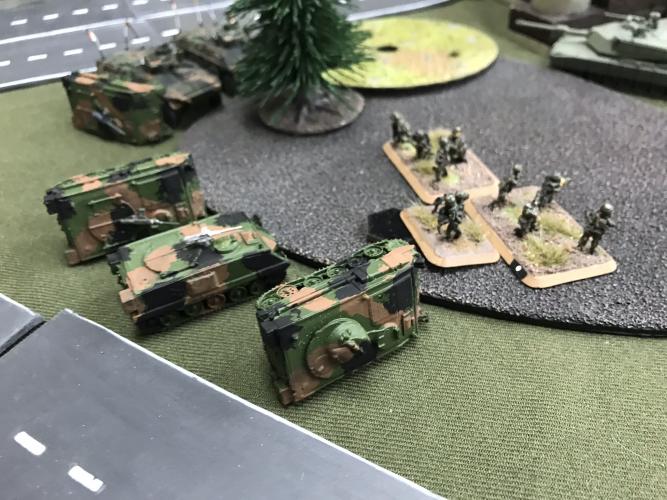