Hitting the Streets of Berlin - Recon

It was time for me to take a peek in Berlin and joined the 2nd Marine Rifle Company this weekend. My last two missions were FTX and RED was nowhere to be found. If I was going to find the enemy, I need to go straight into the heart of Berlin and Recon. I was not disappointed and when we drove to the edge of town there was the 74th Guard Tank Regiment. Damn T-64s……..

Both Armies at 75 points playing in a very tight city playing on a 4×4 table and the using the Quick Mission Recon in Force. At the time, we thought with the quick mission we may be able to get in two games. So we thought…… 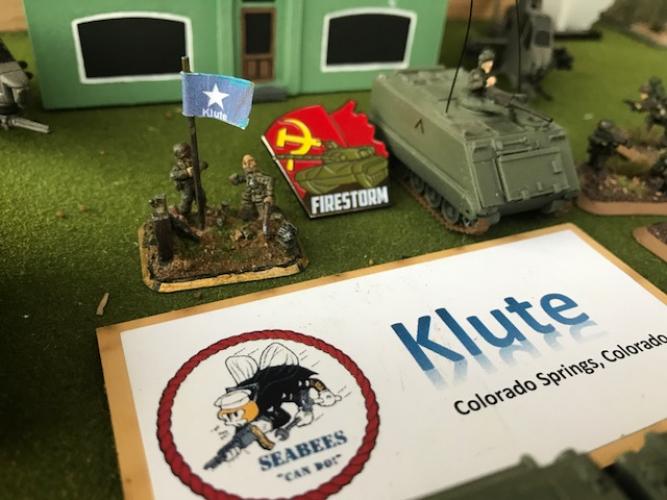 The Recon in Force is fun Mission if you have not tried it yet and well worth playing. I would recommend playing with lower than 75 points. You must secure key points on the battlefield driving off the enemy reconnaissance force, before the main battle begins. Playing this in a city setting is fun and difficult. The Fountain in the middle of the board was an objective, and in the photos you can see the four other objectives in the roads ways. Two on each side. Goal.

A player Wins if they start their turn controlling either:

1. The center objective and at least on other objective
2. Any three objectives. 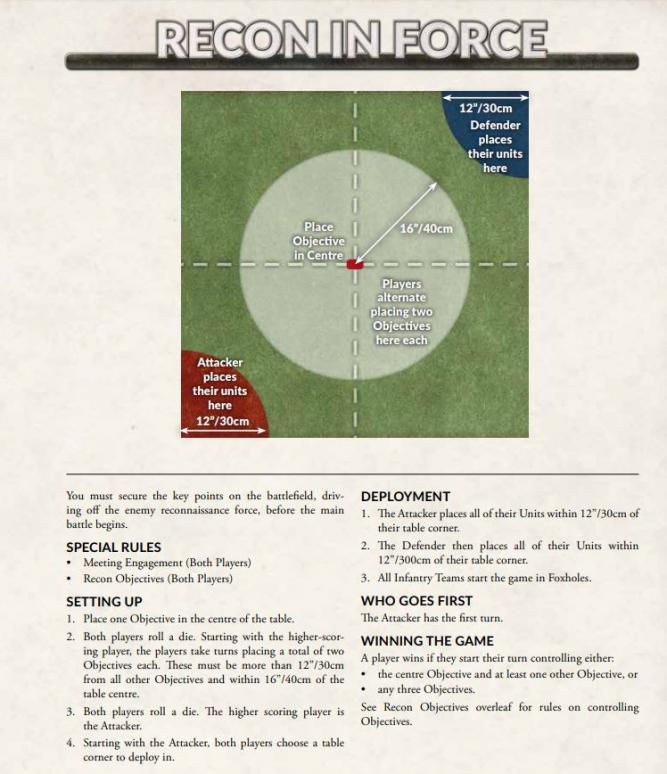 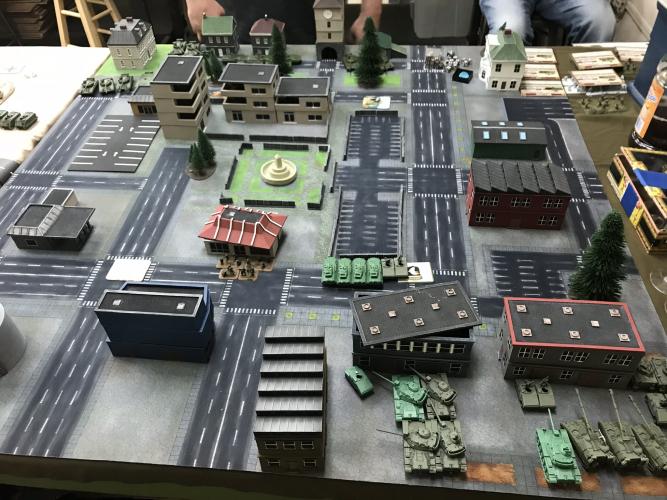 Jeremy won the roll off, and would be the attacker. He selected the Left Front of the table seen in the Photos. Nice cover and right on the Road. My Marines deployed on the Left Front Corner of the photo behind apartment buildings. This was great for my Arty Team but limited my deployment.

After Spearhead movements, I was already contesting the Middle objective and ordering lunch in the McDonalds With my Rifle Platoon. You can see in the photo it was bit crowded and we had several Marines waiting outside. I also had the Right Flank Objective. REDS Spearhead had them on the top Right Objective and infantry in the apartment complex in front of the Middle objective. Now it was time for the mad dash to the contest the remaining objectives. 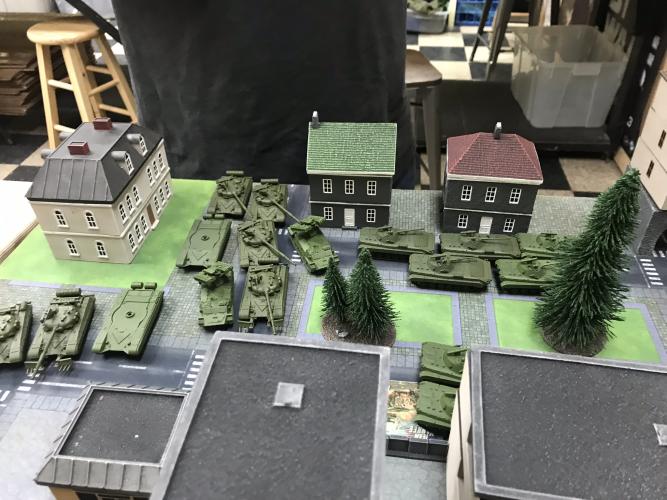 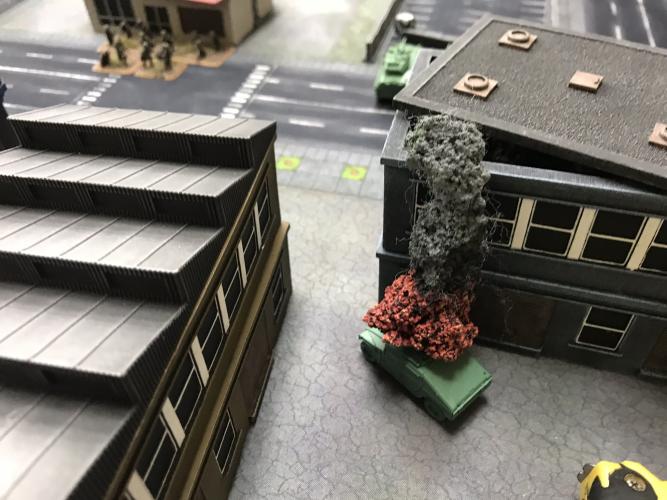 Jeremy is the attacker and has the first turn. He moves his T64-s down the left flank on the road and moves behind a concrete wall on the top right objective with his 2nd platoon of T64s. His first target of course is my FIST. Needing a 6 and a direct hit. My troops quickly remove all the Copperheads from my M109s. He was not that lucky targeting my TOWS looking at him face to face behind a concrete wall. This is going to be a shootout. His Infantry come out of the Apartments and now are also contesting the center Objective. 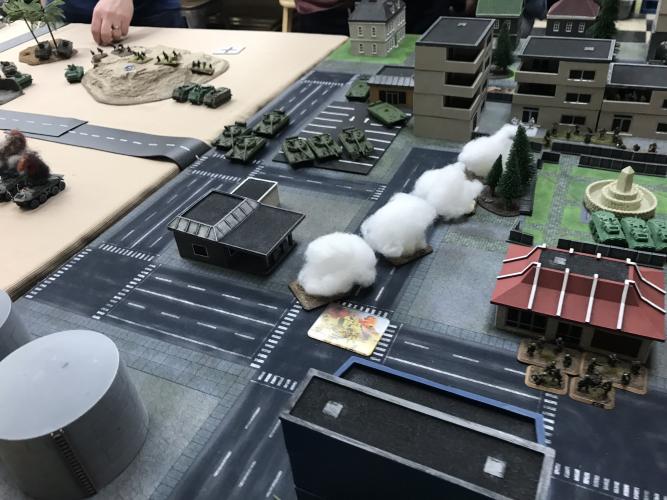 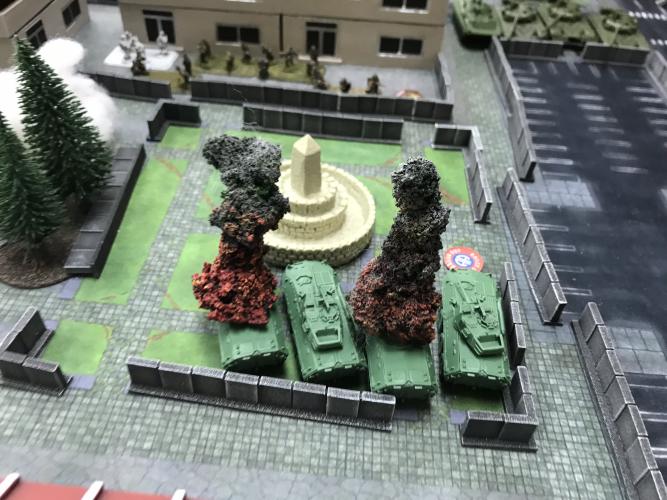 The Infantry from the Apartments and RPGs cause havoc on my lightly armored LAVS. I pass Morale. 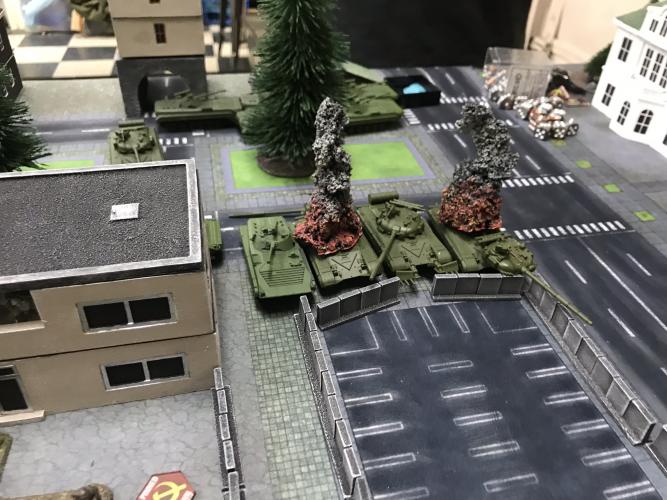 My HMMWV Tows and Dragons make a scratch on the left flank. +3 Morale beats me again. 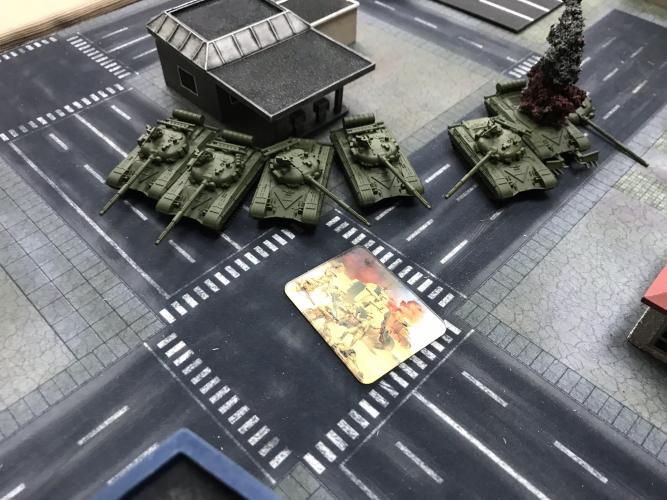 T-64s Roll to the Right Flank and take out two of my M60's and sitting on the bottom left objective. My Infantry Platoon is also contesting in the buildings. 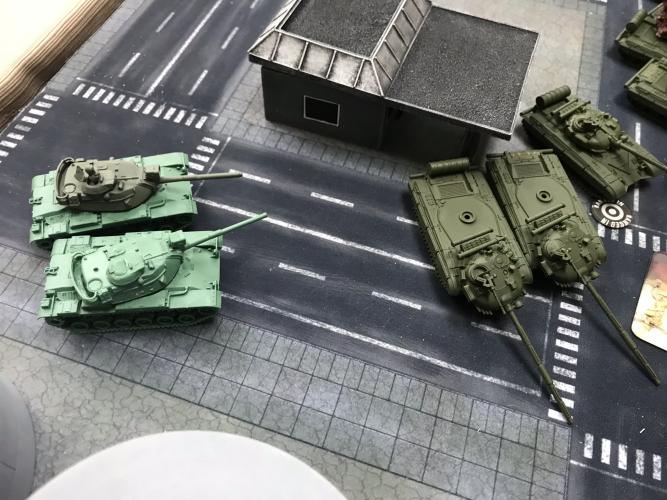 Two of M60s score side shoots and a failed Morale. One T-64 Platoon Down but comes with a price. 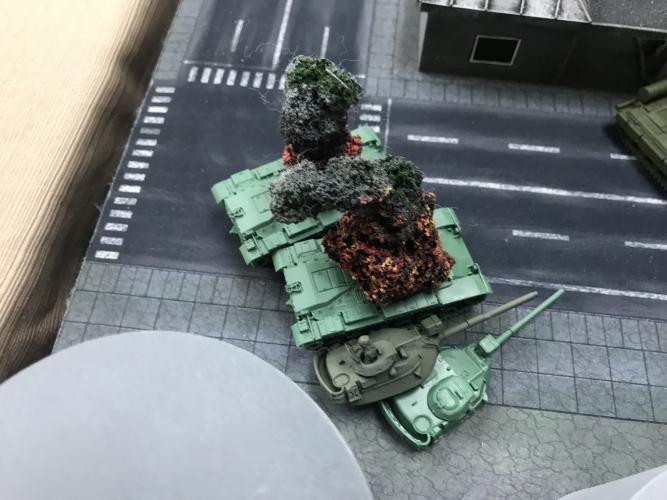 The surviving T-64s return fire and the M60s are burning away. 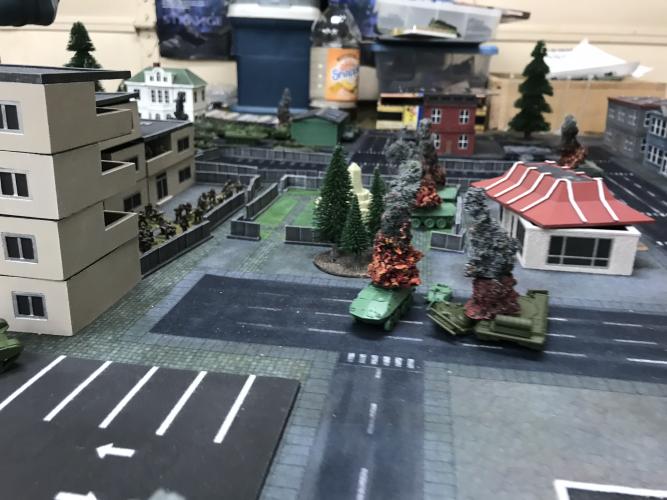 My last surviving LAV was able to take out the AA before receiving the purple heart.

The Last Attempt - What the Heck!

After losing count after 6 turns, we were both contesting objectives and resources were getting low. The T-64s could not be touched by my infantry and continued to shoot at teams in buildings. My Arty started to focus on the Red Infantry in the center objective. My Harriers with Jump Jets did not want to fly in to this battle field and due to the size of the table and location of the enemy I was Danger Close. We went back and forth for several rounds not making any progress.

The Left rear flank had a small opening and cover with trees. What the heck. Reading the FAQ 101 the night before, it was time for a no guts no glory Air Cav attempt. Still needing to hold my right flank objective, I called in my UH-1 to pick up for of my bravest Marines. They picked them up and I landed in the roadway with a line of trees. I had bailed out one of Reds Gophers during this turn giving me some hope.

While my UH-1 short platoon landed (while still in the air), I survived the fire power check of the Gophers AA attack. But I was still a long way from landing.

On Jeremy’s next turn, my UH-1s were sitting ducks and a swarm of BMPs and Infantry from the Apartment buildings ran over to see what was happening. I was hit with small arm fire, BMPs, and the kitchen sink. Failing most of my +5 Saves, Jeremy was able to destroy one UH-1 and the remaining Marines were saved by failed Firepower.

When I landed, my door gunners did not have many targets in range, but was able to pin the infantry in the apartment buildings and killing one enemy infantry stand. My Maries ran for the objective and contested. Praying for +3 Infantry saves next turn. 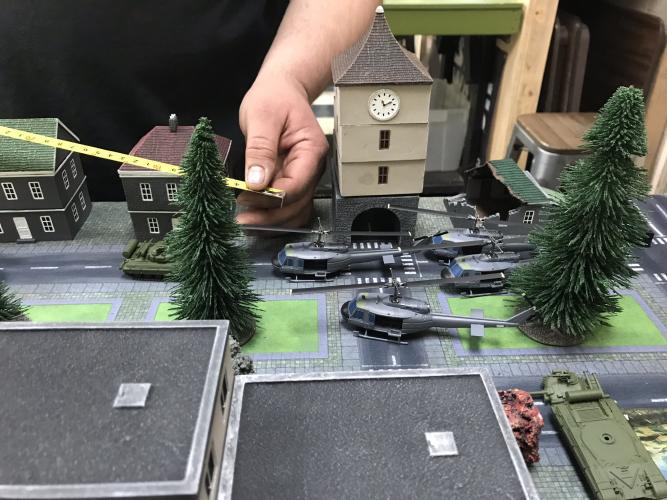 The Helos Land (But Still Flying), Jeremy stays away just over 4" to ensure he can shoot me out of the sky and my troops 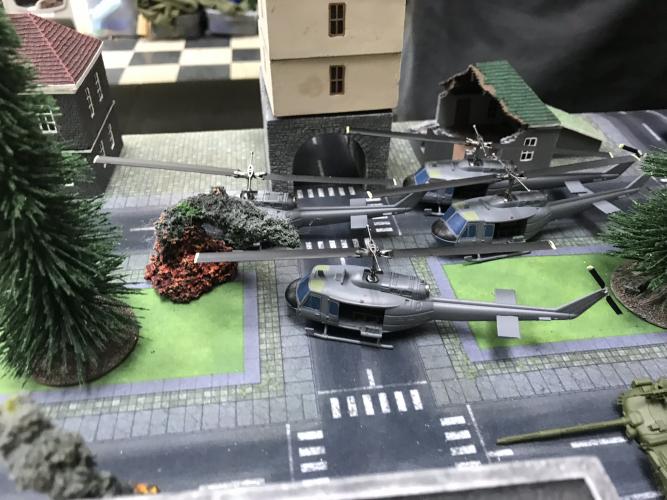 I am sure you all can guess the final fate of these brave Marines. Not enough infantry saves and the objective is now back in the hands of RED. 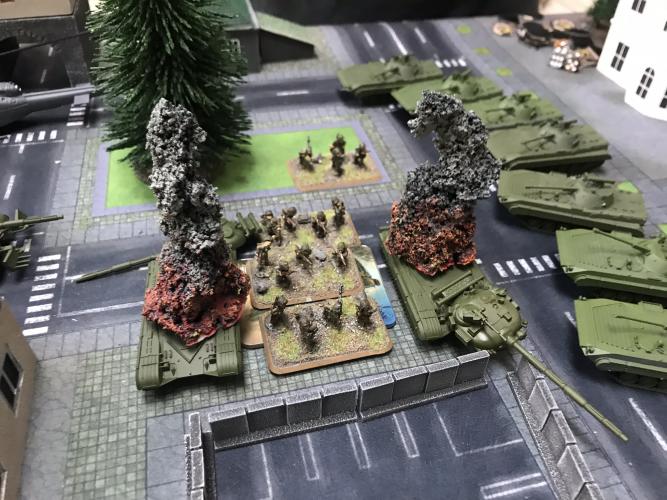 The Marines have followed their orders and on the objective. BUT.... the welcoming party of BMP's are all on the right flank. Do I have to say anything else? (Forgot to take off my dead infantry stand, won't matter)

Recon In Force for Both Sides

My Air Calvary attempt was my last effort to turn the stalemate game.

With Gone to Ground Infantry in Buildings, and T-64s that Infantry could not touch, we would have spent the next 4 hours trying to finish the game.

As night falls, both Red and Blue return back to report back Intel. It’s a Draw….

This was a fun Mission and always great to get in a game with Jeremy. We plan to try it again with 50 points on this table size and mission. I brought AA and RED grounded all air. HMMWV Sam Platoon drove with my unused Copperheads. The HMMWV TOWs did OK at the the start of the game in a fixed position with cover. Driving the around and waiting a turn hurt me. The Harriers are cheap and with Jump Jets coming in on 3's I could not get them to show up and Danger Close on such a small board was an issue.

As far as the UH-1s. Well, this board was to small to really use them. While I was able to land, with luck of bad firepower rolls. Even if I had a full Platoon in them, this was a suicide mission.