It was almost dawn as the first Abrams units cleared the forest outside of Niederbayern. The Soviets had dug their infantry into the ruins on the outskirts, as their Hinds circled the area searching for Allied AFVs. The Allies had been briefed on the possibility of multiple Hinds in the area, and so the thrust was lead by a platoon of Abrams and some supporting VADS.

It was still night when the first shots rang out from the Abrams into the ruins, and it was not long before the cries of wounded and dieing Soviet troops began.
As the American Anti-Air assets redeployed to cover the advance, half the platoon got bogged in the forest. The Abram’s guns had revealed their location, and with half the AA defence out of action, the Hinds spotted their opportunity and swept across the battlefield to blunt the American assault before it got rolling. While the Vulcan cannons of the VADs were mostly out of action, the brave crews of the Abrams lined up their MGs and opened up on the 8 Hinds descending upon them. The Hinds came through the maelstrom of gunfire and unleashed their missiles. Three explosions marked the graves of 3 Soviet aircrews, but four brave Americans had perished in their AA gun as it exploded.

As dawn broke the remainder of the US force arrived and the Soviet infantry were slowly removed from the ruined suburbs they had captured and then occupied so recently. However, progress was too slow as more and more Soviet reinforcements arrived the battle began to turn.

The Hinds had made a number of sorties against the American AA and Abrams to little effect, but gradually minor losses were beginning to build up. The short platoon of Abram had rushed to the left flank to block a flanking move by Soviet recon and infantry, but while the Soviet vehicles were quickly destroyed by the tanks they had had to move outside of the Anti-Air bubble. A tank was lost, and while this was less than lost by the Soviets, they could better wear their losses.

While the Hinds had threatened the most, it was the Soviet artillery that proved decisive. It had taken some time, but they eventually ranged in on the VADs. One particularly effective salvo saw the platoon reduced to a single vehicle; these brave troops collected as many of their wounded compatriots as possible and rushed them back for treatment. While this act undoubtedly saved lives, it did mean the American AA was gone, and there were still 5 Hinds patrolling the skies.

Aware their situation was becoming more precarious by the minute, the Americans advanced to bring their guns to bear on the Soviet vehicles. Hoards of Soviet BMPs were soon brought down by accurate Abrams fire, but there were always more Soviet units to fill the holes.

It was the Hinds that finally blunted the American attack; no longer scared of the American Vulcans, the Hinds descended on the Abrams and had soon wiped out all bar two of the tanks. The CO was dead, along with most of the companies fire power. Rather than throwing away more precious American lives into the maws of the savage Hinds, High Command ordered the remainder of the unit back for refit. High Command will also examine whether a more appropriate camouflage colour should be used for future attacks. 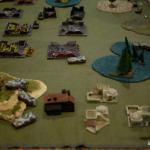 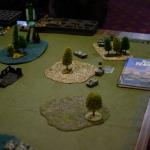 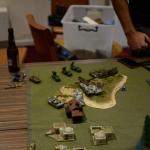 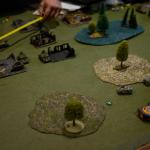 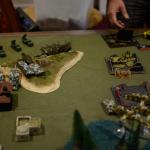 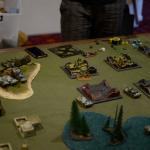 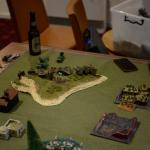 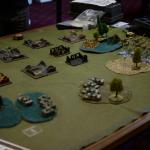 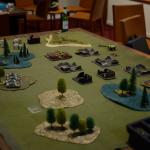