Welcome to the (urban) Jungle

Panzerkompanie Hasslehoff is part of the concentrated push back against the NATO thrust into Leipzig and were tasked with assaulting USMC positions to the south of the theatre. The lack of infantry support was certainly going to be telling, but overall the stubbornness of the Marines allowed them to withdraw in good order, instead of the rout that Command expected.

1st platoon of T-72M pushed the northern flank to engage some Amerikaner designated ‘LVT’ light vehicles, and a platoon of M-60 ‘Patton’ tanks deployed behind a hedgerow, flanking round a vehicle garage, whilst 2nd platoon of T-72M remained in support due to the presence of mines littering the main road into the estate.
Oberst Hoffel Roffel took to commanding the supporting platoon of older, but still reliable T-55AM2 tanks to the south, to push through the fields, and around a factory complex to engage some ‘Humvee’ transports which were lurking near a couple of gas silos. Leading the way in front of the T-55AM2 platoon were a detachment of BMP-1 scouts, eager to push through to the objectives beyond.
In support, hanging back beside the petrol station, were a detachment of Spandrel Anti-tank missile launchers, and a battery of 2S1 ‘Carnation’ Howitzers.

Turn One
1st Panzer platoon conducted themselves well in the first engagements, the ‘LVT’ scouts taking a good few hits, but the stubbornness of the American Marines kept them in the fight. 2nd Panzer platoon opened fire on the concealed ‘Patton’ tanks, knocking one out, but the hedgerow hid their hulls well.
Meanwhile, the BMP scouts engages the Humvee scouts, knocking them out to a vehicle. The T-55AM2s following up eagerly.
It was then that the US forces sprung their trap. A platoon of M60 tanks lurking by the gas silos opening up on the BMP platoon, leaving them burning. A pair of lumbering transport vehicles, mentioned in dispatches as ‘AAVP7s’ joined the fray, their heavy machine-guns peppering the hulls of the BMPs. The brave grenadiers in the lone remaining one refusing to quit the field, but stubbornly refusing to remount and fight on.
The infantry belonging to the ‘AAVP7s’ revealed themselves to be hiding in a disused factory slightly further north than the one the BMPs rounded, opening up with man-portable anti-tank weapons. A lucky hit knocking out a T-55AM2.
To the north of the field the Americans returned fire, shots streaking past the advancing Panzers, one being too slow to reach cover as a ‘TOW’ missile flared from a ‘Humvee’ and caught just below the turret, blowing it off.

Turn Two -Turn Three
1st Panzer platoon rolled out over the burning wrecks of the ‘LVT’ scouts, their pitiful 25mm guns unable to even dent the thick armour of the superior tanks. The platoon finished what they started, putting 120mm shells through the thin sides of the remaining ‘Pattons’ leaving devastation in their wake.
2nd Panzer platoon was ordered to advance through the centre of the estate, cautioned on the location of the minefield. It seemed however that two of the drivers had been sampling the local schnapps beforehand, and caught their tracks on the thick concrete walls, whilst the rest advanced to the cover of the petrol station.
The T-55AM2 platoon floundered a little, unsure whether to advance or hold back, the presence of ‘Czech Hedgehogs’, the minefield and enemy tanks holding them in position for now. Their only action was to destroy one of the ‘AA7VP’ carriers which strayed too close.
The American forces repositioned after the initial sporadic firing, finding themselves in a much better position. To add to their confidence, a flight of ‘Harrier’ jump-jets arrived from support, but only to fly past and survey the field for targets, before engaging after-burners and wheeling round for a run shortly after.
The firing continued, one of the drunken Panzer crews being taught a lesson in battle-readiness as a ‘TOW’ missile struck home, ending the tank. The brave BMP was also ended, another lesson in bravery, and knowing that sitting in your tank is a bad position when your gun should be firing.

Turn Four -Turn Five – Turn Six
The T-55AM2s decided to advance through the wrecks of the BMP, to attempt better shots at the now distracted M60s. The gunners were lax though, and the shots failed to hit home. The only vehicle taken out by the barrage being the lone ‘AA7VP’ on the other side of the factory complex.
1st Panzer platoon advanced towards the objective; the main road north, taking out the commander’s tank. The man himself was seen leaping from the wreck onto the roof of a nearby ‘Humvee’, before clambering inside.
2nd Panzer platoon continued their advance, finally being joined by their compatriot. However their assault was ill-fated, as some lucky hits from man-packed anti-tank weapons knocked one out, and bailed another, sending them skidding to a halt.
The American forces consolidated their positions, capturing the disorientated tank crews from the remaining platoons as the supporting assets were seen retreating back to their starting position, ensuring their use in future engagements. 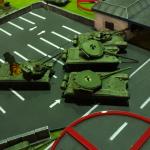 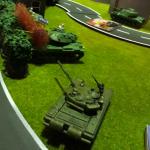 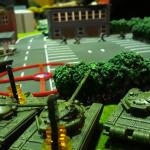 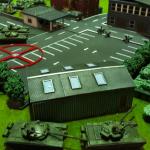 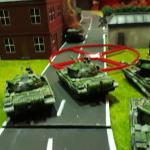 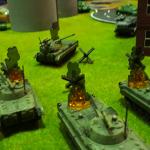 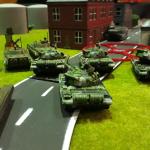 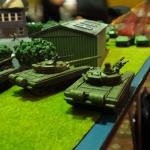 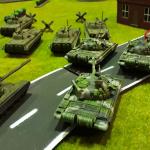 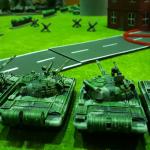 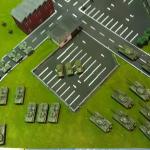