"Good evening sports fans! We're approaching the playoffs in the season, and tonight's game is covering a matchup in Hamburg between Hoffel's VolksArmee and Nisbet's British II Corps.

Hoffel is coming into this game off the back of a rare win, though a week out from training may have broke momentum. Nisbet has an unbeaten streak so far this season, with several stunning victories.

Let's check the numbers, over to you Pepper!"

"Thanks Cotton, here's the numbers. Hoffel is lagging one game behind, but has scored a win in his most recent game. Nisbet is looking to continue the winning streak and keep those points rolling in within the G3 Division. Both players have been forced out of a weeks worth of games due to logistics issues, will this affect performance? Back to you Cotton!"

"Thanks Pepper, we're just waiting on the players picking their forces from the bench and the warmups have commenced. Let's go to April at turf side to see how they look in the warmups."

"Thanks guys, April here with close-ups inspection of the forces doing their warmups.
First up let's take a look at Hoffel's Volksarmee then Nisbet's Brits."

"By the look of things, Hoffel's went with an armoured formation again. Importantly, we can see he's learned from the proxy penalty he got called for in the last game and won't mistake a T-55AM for a T-72M again! I can see the usual Shilkas and Carnations for support, and going with a 5-5-3 formation of armour. The new upstarts in the shape of the BMP-1 Aufklarungs, that got a well deserved man of the match in the last game, have made a re-appearance. Though having to shave 15 points off leaves no air support or Spandrels, we'll need to see how this affects things!" 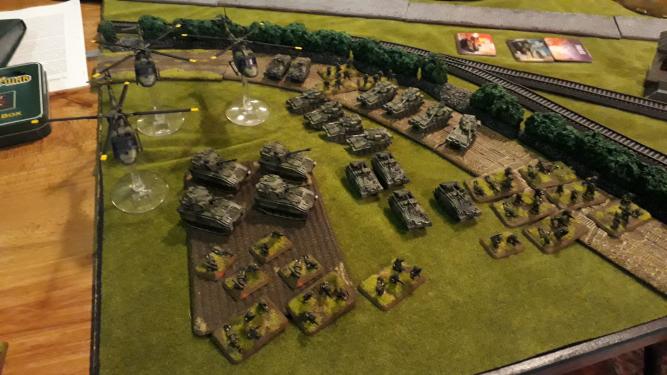 "We've creeped a spy shot of the Brits that Nisbet will be using, and in a strange turn of events it is what appears to be an unusual list choice, drawn from the "British Corps II" pdf approved by Battlefront! What we have here is some kind of Recce force, Scimitars, Strikers & Spartans to get the alliteration going. Backed up by the usual Abbots and Milans with a few Lynx's thrown in for good measure. I don't think we'll see them tonight though, as the mission drawn has Nisbet on the defensive and Hoffel on offense."

"Thanks April, two good looking forces there. We saw a little corner of the field of play, let's take a look at the whole area and see what issues could crop up. Pepper, any comments on the field we've got tonight?" 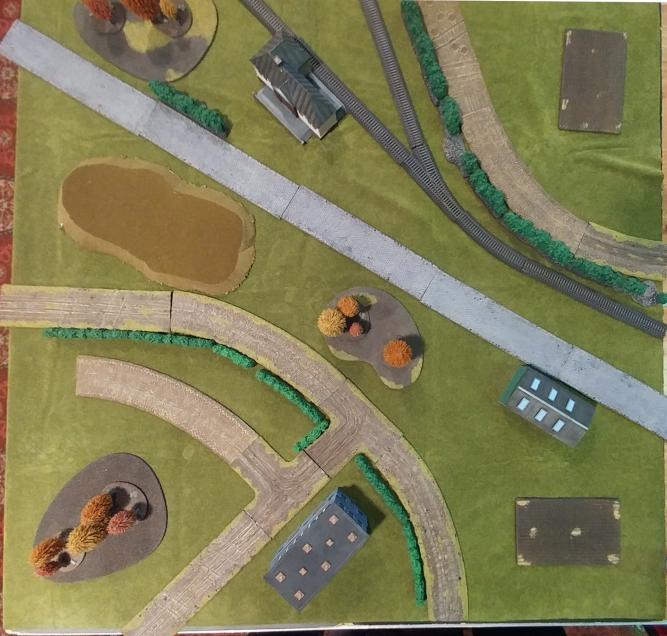 "Righto Cotton. What we have here is a four by four field, a fair bit of terrain in it with some line of sight blocking pieces in the centre. There's a building on each side of a central road - they should provide ample cover for any infantry, and there's decent amounts of cover to manoeuvre in and around. Back to you Cotton, for deployment and we'll take it from there."

"Thanks Pepper. The players have rolled for attacker and defender earlier, with Nisbet winning the roll and opting to take a defensive role in the game, and the north side of the table as our cameras are viewing it.

There's three objectives in the defenders' table area, Hoffel will need to capture an objective as normal but then also remove the capturing unit from the game. He needs to do two objectives like this but being outnumbered in terms of units could prove too costly to withdraw one each time. Will he go for objectives, or try to force break in morale of Nisbet's Brits?

Nisbet is playing in orange jerseys tonight, and Hoffel is in his usual green jerseys." 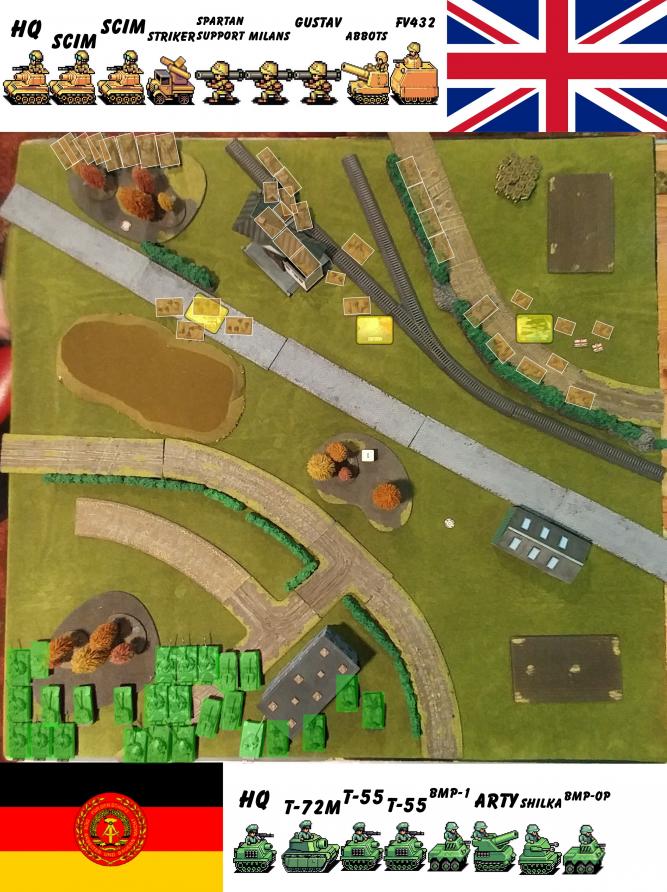 "The players are taking to the field... and it looks like Hoffel is going for the "Clankity Clank, Coming For Dat Flank" tactic! Let's cut to the action now, game on!" 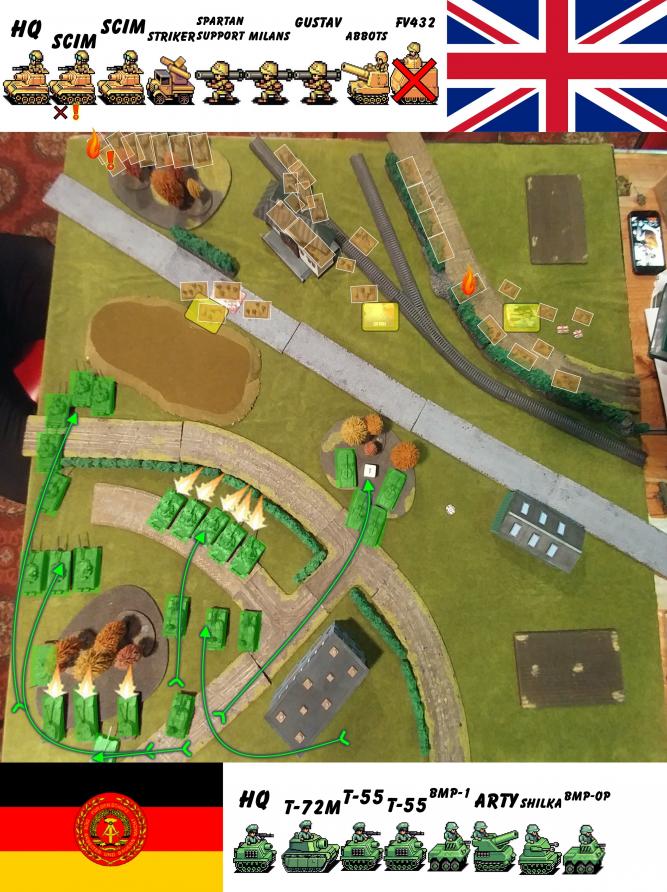 So things start off with me on the attack.

There's a load of cross country dashes going on, the BMP's try to take up a firing position in the woods with a tactical & follow me but get unlucky with checks.

My camo T-55AM's move up to a hedgerow and open fire on the FV432 spotter across the field and get the lucky shot to take it out.

Carnations open fire, thanks to the BMP-OP just in front of them in the woods. Aiming for the British Scimitars and Abbots, they manage to destroy one of the light vehicles and bail out one of their pals.

First blood to the good guys!

"Hey Hans, we got first blood! I think we'll wreck them!" 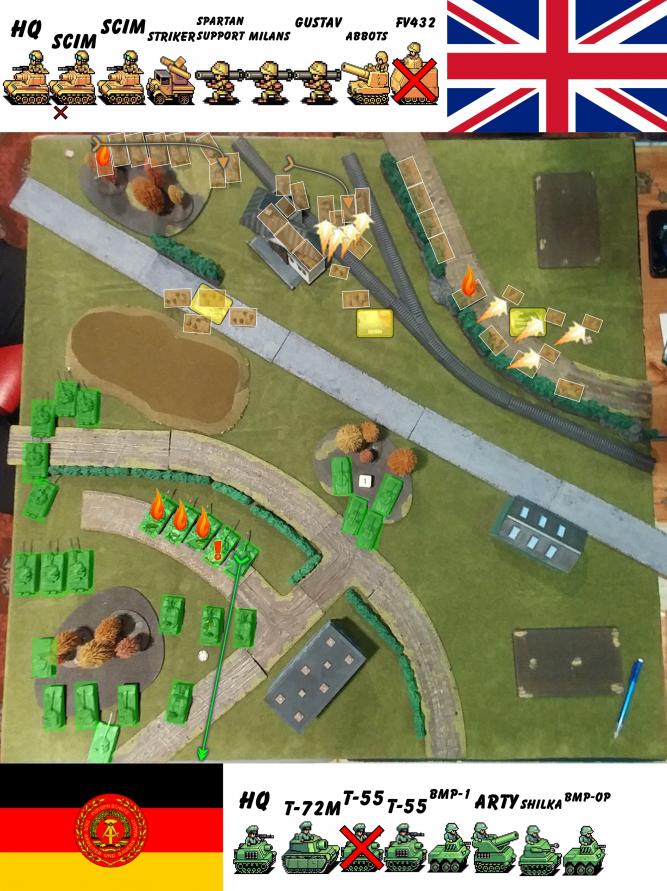 Not much in the way of manoeuvring from the Brits - the Scimitars scuttle out from under a repeat bombardment, and the Strikers do a short blitz to get a bead on the T-55AM's.

Milans over on the eastern side open fire and pull off two kills on the T-55AM's, swiftly followed by the Strikers attack doing almost as well with a single kill and a bail on the beleaguered unit. They fail a subsequent morale check and leg it from the table. 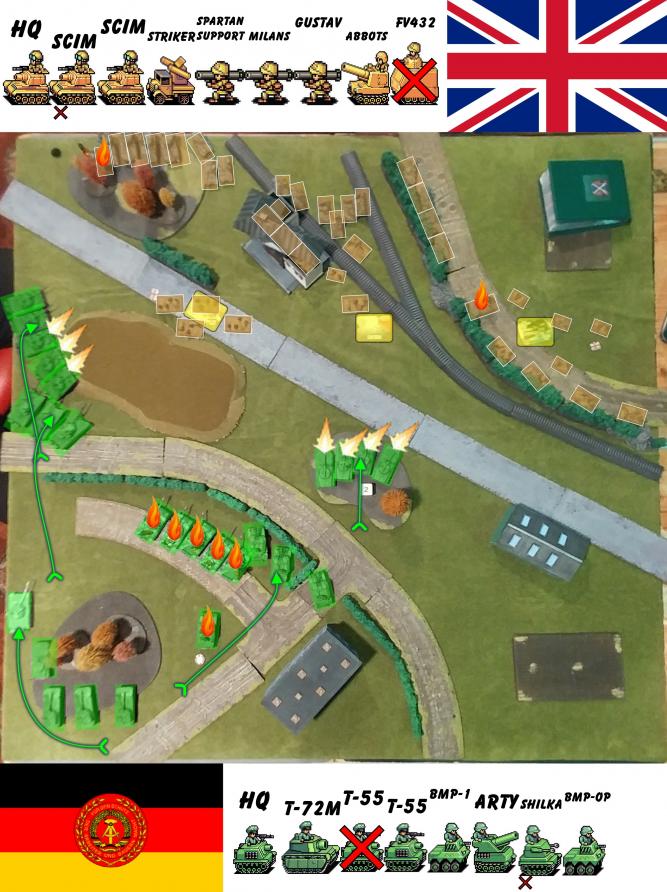 Sticking to the plan my remaining T-55AM's with the T-72M's as backup surge up the left flank, looking to engage the Scimitars and stay out of assault range of the Spartan support at the nearby objective. Opening fire, they fail to score any hits on the wee guys as they skulked at the edges of the woods.

Hoping to set a better example, the BMP Aufklarungs in the centre woods open fire after a successful blitz, with the Milan teams and Gustav laden infantry in their sights.

Unfortunately, they miss as well. Ho-hum. 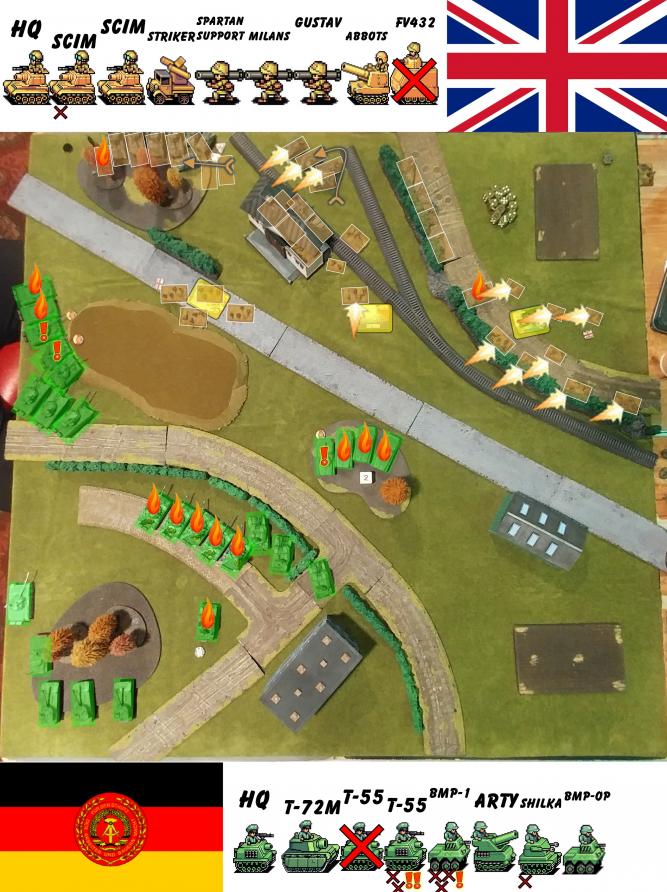 Bolstered by their previous turn, the British maintain the firing line, with the Strikers making another short blitz move to get a solution on the other unit of T-55AM's. Their firing is spot on, resulting in two kills and a bailed out T-55AM.

Over to the east, the Milans open fire on the same unit, giving another bailed out vehicle to the tally, leaving a single operational vehicle. One team tries to crack a shot at the BMP's but it goes wide.

The Gustavs in the train station area fire on the BMP's, with the Air Landing unit adding their weight to the salvo. At the end of it, we have three destroyed BMP's and the remaining on bailed out, who then passes his morale for some daft reason.

Until they get relieved, it looks like the Scimitars to the north try to duck into the woods for protection, but get snagged up in the undergrowth.

A heavy toll for the Volksarmee again this turn. 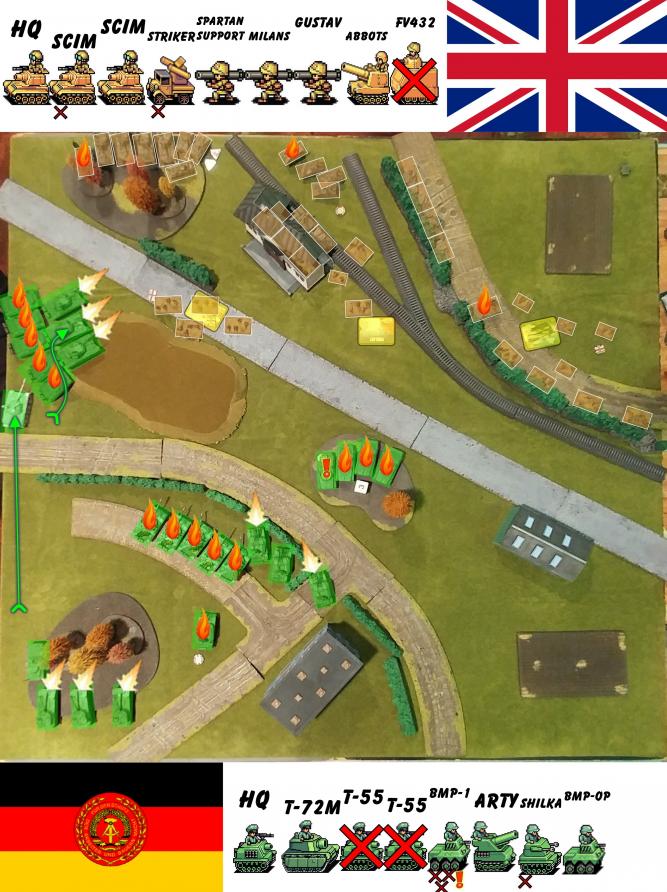 Following their brave brother unit, the T-55AM crew jump out and make for the hills.

Again, trying to set a better example, the remaining BMP Aufklarungs stays around, but they fail to remount and remain bailed.

Using the Shilka command as a spotter, the Carnations open up on the Strikers at centre north, hoping to catch a few ancillary targets with their fire. Unfortunately, accurate reports of position are not to be found and the targets all escape the barrage.

The other two Shilkas take shots at the Spartan support infantry, but again, everything misses the well hidden infantry in their foxholes.

In the final volley of the turn, the T-72M's get frontline action and take aim at the Striker vehicles that have been skulking around the back of the train station. They are rewarded with a single kill for their efforts.

Need to push an objective! 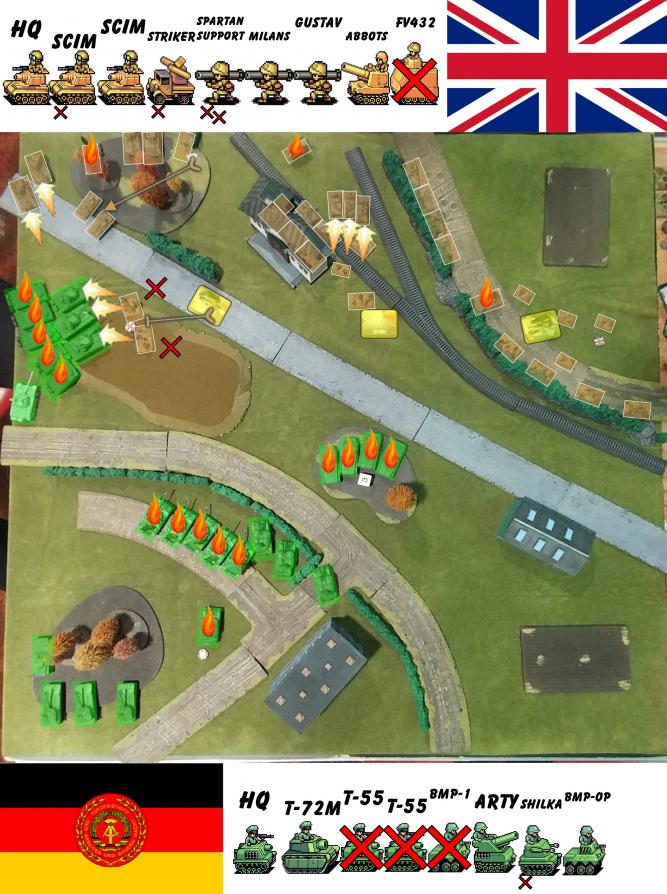 With the main threat of the T-72M's pushing close to an objective, the Abbots decide to try and fire over open sights by moving around the woods for a decent shot. Unfortunately only two make it out the woods and they miss their shots as well.

Two of the plucky Scimitars surge from the woods, hoping to sneak round the T-72M sides for a chance at a kill. Not this turn, movement falling a little short.

With the tempting target of the T-72M's in front of them, the Spartans emerge from their foxholes and aim to assault. Defensive fire is accurate however, giving nine hits and two kills from them. The assault is stopped in it's tracks and the Spartans are caught in the open.

Over at centre north, the Strikers again pull off a blitz and take aim on the remaining bailed out BMP Aufklarungs. Shots are on target and the vehicle goes up in smoke. 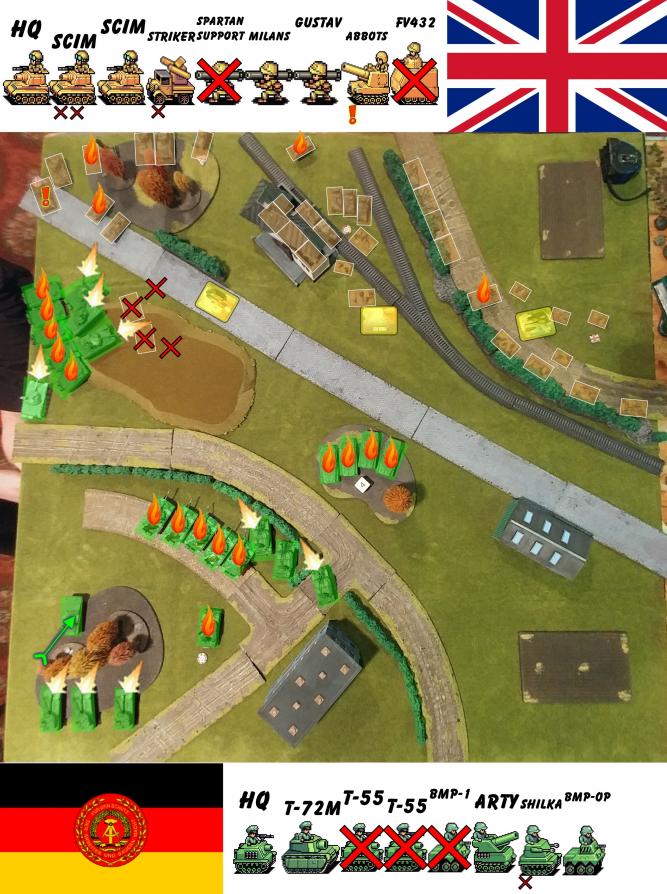 Not much I can do by this point, other than try for cheap kills by the look of it!

The Shilka lead spots again, with a bombardment aiming smack bang in the middle of the huddled up Strikers and Command Spartans. Even with the abundance of targets, not a single hit was scored. Guess we're firing blanks today then, arty crews?

The other two Shilka's open fire on the Spartan support that have been caught in the open, and unsurprisingly they are taken out under the volume of shots.

My command T-55AM takes a pot shot at an Abbot at the north east, and manages to fail a 2+ firepower test. So just a bail on the crew sadly!

That leaves the T-72M's to act. Splitting their fire, two of them fire on the advancing Scimitars, leaving one of them a burning wreck. The third tank fires it's MG's at the Gustav units in the train station, but again, nothing finds the mark.

That'll be that then!

No picture here, by this point I was ready to throw in the towel but I wasn't going to deny the British a turn to even up the number of turns each.

So, the Abbots opened fire on the T-72M's, getting a single kill with the powerful shells.

Trying for a lucky shot, the little Scimitar tries to pop round the side armour of the T-72M unit and takes a shot which is bounced off the armour, much to the Scimitar's chagrin.

Finally, the Strikers go for a final volley. Their shots are on target, and another one of the T-72M's go up in flames. Leaving a single vehicle in the unit.

At this point, I concede the game and the British win the day, 4-3 by the look of things?

That was a hard report to write.

A very demoralising game, was hoping to push up the left flank using the hill and train station for cover to roll into the first objective and consolidate from there. But again, I fall foul of the 'every man and his dog has anti-tank' and the seemingly 'I win' button that are Milans, amongst other units I still aren't familiar with. Not learning anything, other than getting kerb-stomped.

Even if I did manage to capture an objective, having to remove the unit that captured it would cripple what little forces I had left by the time I made it to an objective.

To have pretty much lost the game by turn 2 (some might even say turn 1) and then keep on going was very frustrating. Feel I am letting the WarPac side down, it seems I am just getting farmed for points and victories for the NATO side, so sorry guys.

Next game is another day.