After the previous game's carnage, my opponent came up with a better rounded list. More platoons, more smallish units to have more stuff from the start and more tanks.
I responded with a slightly buffed up version of the list thanks to the extra point allowance. I wanted to keep the "small is beautiful" approach although not all the models are fully painted but (red) bear with me!

The last time we went through a minefield was in 1943! 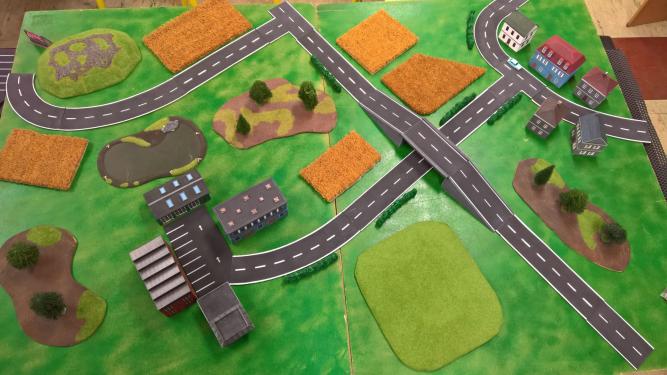 The village to the east is going to be heavily defended by the Reds.

I was not happy with mission selection - No retreat - because my tanks suck at advancing, they drop ROF, have paper flanks which make them easy prey of suicidal BMP runs and they cannot easily dislodge infantry because they cannot assault. Still, they'd have their job cut out for them - the Chieftains would mass in the centre while the "running circus" of recce vehicles would harass the hill to make sure Stefano had to place his infantry in a shallow line. And shallow line was!
Having many units to deploy from the start, Stefano's deployment was harder to deal with. 2 tank units were available from the start along with the infantry (whose transports were in ambush) and the Spandrels. 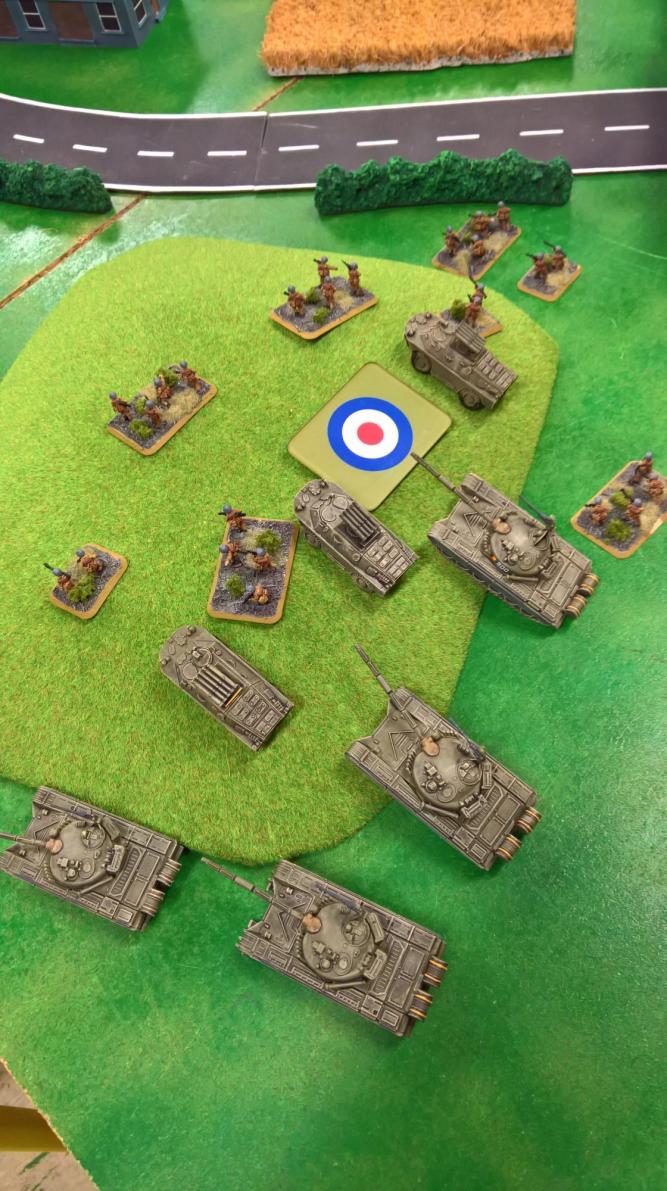 Spandrels are going to fight to the last motor rifleman.

The left flank, with the forward objective, was too heavily defended to overcome it before reserves flooded the table, so I placed very few units point-wise on that side, while my infantry (hopefully) cleared the minefields to allow me to advance unopposed (as long as there was no ambush).

I moved everything forwards to gain good firing lines for Abbots and Swingfires, since I would need to move them as little as possible henceforth. The Tinies advanced to face the Spandrels, their missiles being way overkill against them. 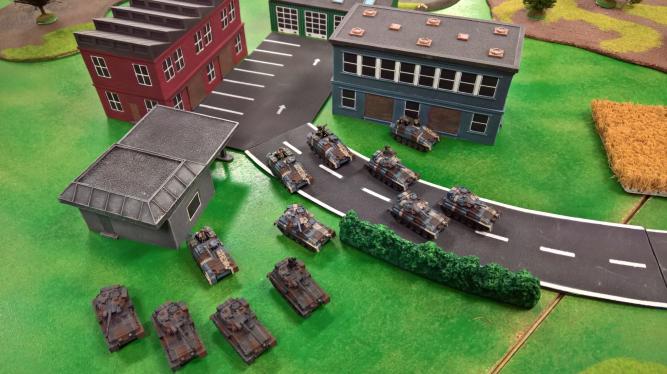 No, the Scimitars don't have a "night fighting camo scheme".

Judicious use of smoke kept them safe from Soviet attention. Although protecting the tanks was obviously more important, their natural predators were the ambushing BMPs and until they were revealed smoke wouldn't have made any difference, so I decided to use it to protect the light brigade.

The first enemy turn saw no firing at all and no reserves. Stefano waited for my infantry to come out of the vehicles to deliver his ambush.
My troops blitzed out of the vehicles, passing the skill checks to be in a position to clear the minefields in the following turn.
The "lights" took their chances on the Spandrels and wiped them out. Not too difficult! 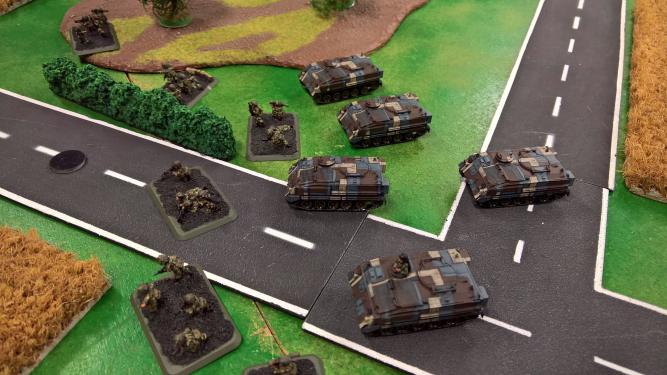 Mine clearing made simple

The ambush was revealed and reserves were available for the Soviet player, with the third tank platoon rolling in. In front of such numbers, the demise of the Spandrel was definitely insignificant!
The two lead tank platoons moved to a position from where they could engage the Chieftains while the third moved to the right flank, to make sure all quarters were covered.

The shooting step saw the demise of a Chieftain (with another bailed) and the whole Scimitar platoon to BMPs. Those that could fire at the infantry did so, but long range and cover meant that they were fortunately left unpinned and able to proceed with the mine clearing the following turn.

In my turn the infantry cleared both minefields and I moved my forces to avenge the Scimitars. Between the Chieftains and Swingfires firing at the tanks on the overpass, 6 tanks out of 8 were destroyed. The Blowpipes destroyed a BMP and the Scorpions blew up another two.
On the right flank, the Chieftains moved inside the BMP missile minimum range but failed to cause any casualties.

The Abbots started a long and exhausting war against the infantry, killing two stands and bailing a BMP. 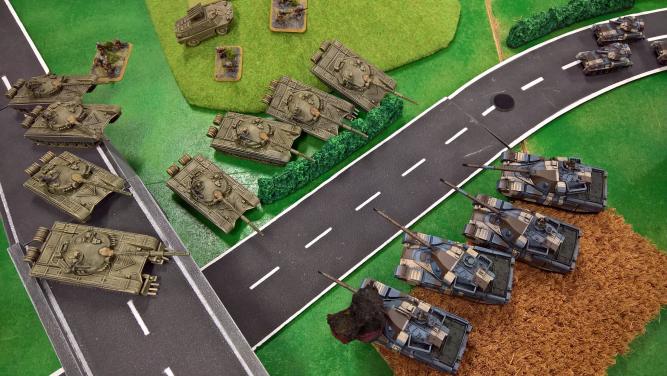 The Soviet player received more reserves but they just hugged their table edge as he was unsure of where to commit them while the casualties were this light. His infantry stayed pinned and couldn't do anything to overrun the tanks before my own infantry could catch up with them.

One brave BMP driver gunned his engine to outflank the Chieftains. Despite the cover and being out of command, he scored one hit, which I failed to save, but fortunately the shot only bailed the target (which I failed to remount the following turn).
The other BMPs fired again at the infantry. They still couldn't pin them, but two stands were destroyed!

On the other side, the two surviving T72s hid behind the overpass to ambush any British force that dared to reach the other objective, just in front of the bridge. 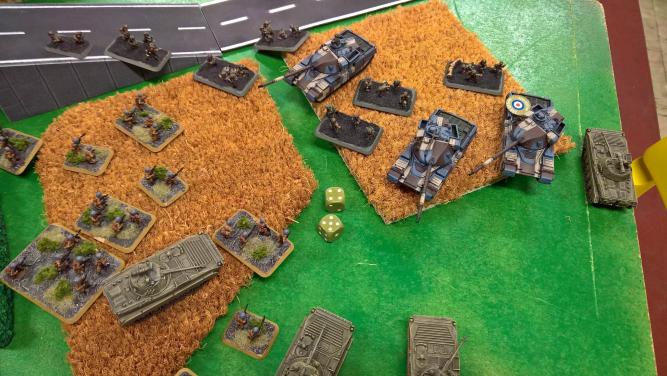 British forces try to push the defenders out of the cover provided by crop fields.

On the right flank, the infantry advanced to support the tanks. All the BMPs had to die before I could commit my forces to an assault on the infantry.
On the other side, the tanks waited to move underneath the bridge but the Scorpions rushed in mainly to provide the enemy with targets. Harsh, but necessary, since while the Scorpions were there the other BMPs couldn't advance.

The artillery hit the motor rifles once more, killing one of the PKMs. The infantry and tanks let loose at the BMPs and all the remaining ones were destroyed. The Blowpipes kept firing missiles at the dug-in infantry but scored no casualties. The Swingfires, having run out of target, relocated elsewhere. 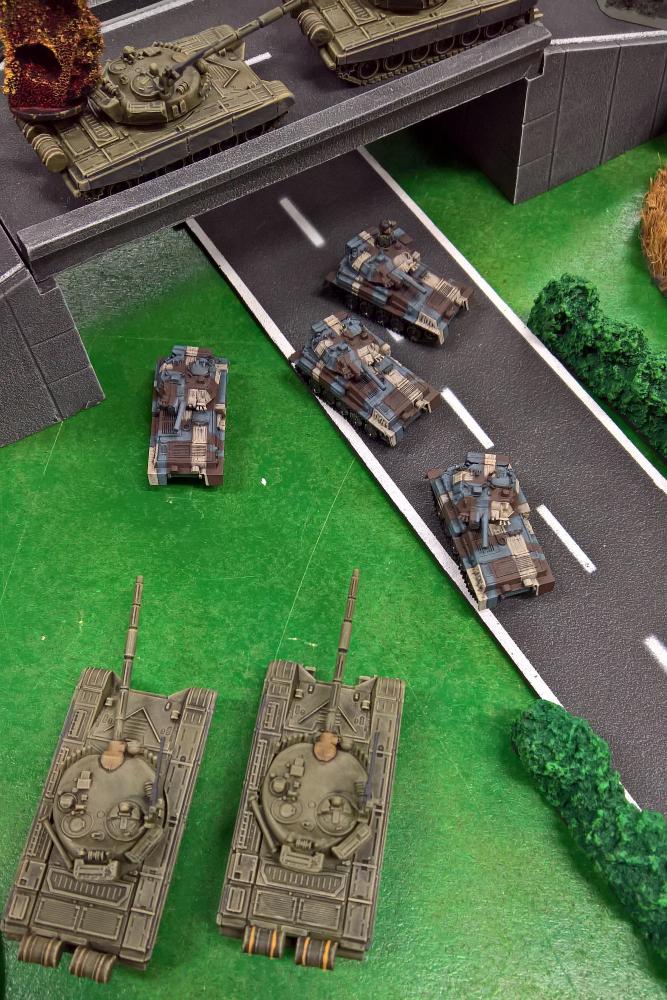 The BRDMs arrived from reserve but their only viable targets were the Scorpions and the recon BMPs were already there to engage them so they moved to be as incospicuous as they could.
On the right side, a duel erupted between the last functional T72 platoon and the Chieftains. One hit was scored and I switched it on the bailed tank, which failed the save and was destroyed. Serves him right! Nobody likes a "Jonah"!
The Soviet infantry, having recovered, plastered my mech rifles with AK fire inflicting a causalty and pinning the platoon.

The BMPs and T72s made short work of the Scorpions. Hopefully their sacrifice wouldn't have been in vain. 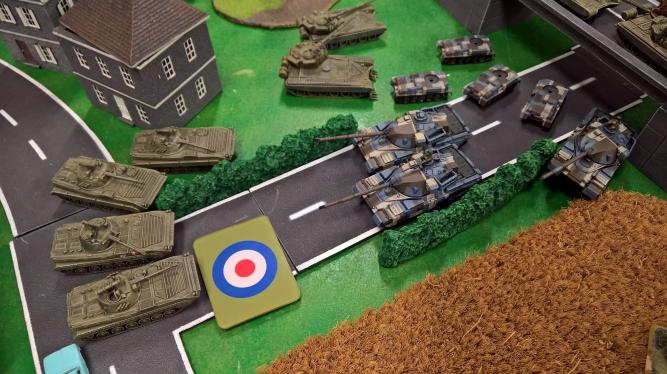 The charge of the Heavy Brigade

In my turn the infantry recovered and the tanks, led by the HQ Chieftain, blitzed and moved to engage the T72s. They were destroyed swiftly, leaving only the recon BMPs between then and the objective in the village.
That is, as long as the infantry could get rid of the accursed motor rifles!
On the other side, the two surviving Chieftains destroyed more T72s. The infantry, transports and artillery all put their firing weight into the motor rifles, inflicting more casualties before a successful assault, wiping out those who weren't hiding in the houses to the back. 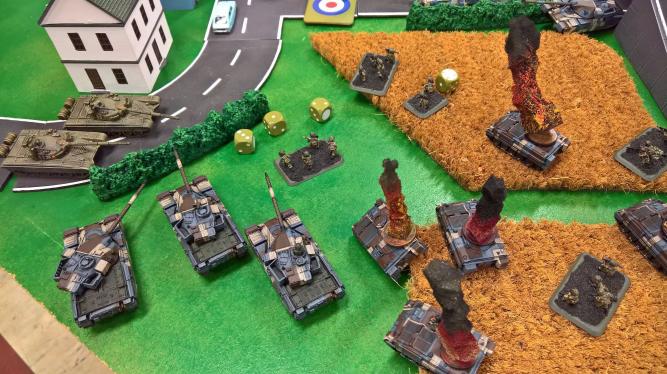 The transports are destroyed by skulking BRDMs, but this cannot prevent the Brits from winning.

The BMPs moved to flank the tanks on the objective. 8 shots later the HQ tank was bailed, but the platoon was fine. The gamble had paid off and my tanks were in a position to repel anything that could deny them the objective, and the infantry was there to assist them. Unfortunately their transports weren't because the BRDM put themselves at extreme range and destroyed 4 out of 5, with the last one fleeing.
In my final turn the tanks on the right side finished the T72s and the BMPs holding the objectives were wiped out. The road to Frankfurt was re-opened! 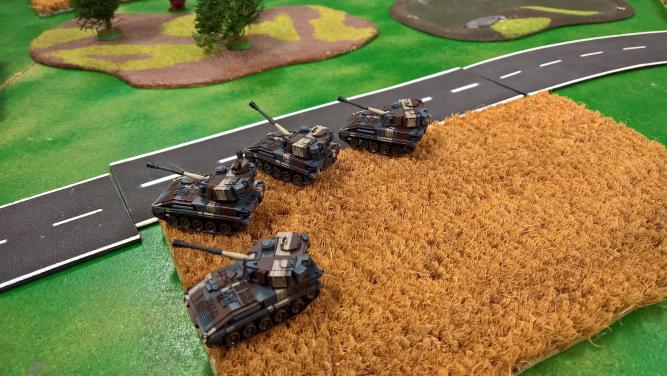 Only unit in the game not to suffer casualties...