I told you it was the SECOND to the left!

I was away for work so I couldn't bring my army to the club. However, I asked my friend Mattia if he could lend me his US army. He also went for a particularly cheeky theme for his troops - GI JOE. Feel free to call me names in the comments if you do not fancy the choice, but I have a job to finish in Hannover and I'll be damned if I let it fall in the hands of the reds! 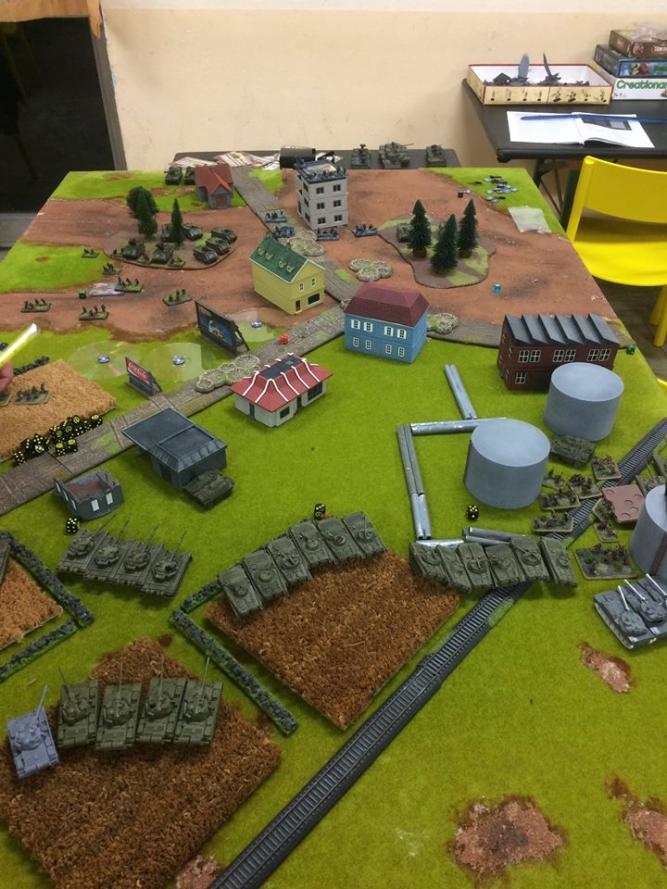 The massed East German tanks whet their appetite in preparation of the assault.

Playing US for me was a challenge, but a refreshing one as I had everything I missed in the British force: rapid ground firing AA, tanks that could move and fire at full effect and good artillery.
However, I also hadn't everything I like the most in the British force: resilient infantry, high AT and 2+ blitzes with the HQ.
Defending in No Retreat, I bolstered my right flank with minefields and put down the two infantry platoons (hoping that 6 Dragons could supply the lack of quality with their quantity!), ITVs and the M109s that would become the hardest hitters in the force, with the Abrams in reserve to plug any gap that my opponent might carve.

The East Germans loaded on their own right side, giving a wide berth to the minefields, and hoped to crush the resistance on my left flank before reserves could turn the tide. 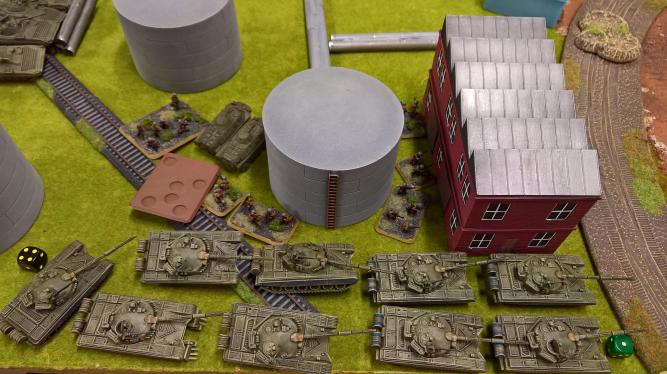 The rumble of T72Ms is deafening.

Ze Germans advanced swiftly if not deftly to mass on the left flank. They knew they would suffer significant casualties in the early turns but the final outcome was all that mattered really! Pot shots were taken at the concealed and gone to ground transports, but they all made it safely.
The most important roll of the game was already at hand and with a sigh of relief my reserve die landed showing five pips! I didn't want to commit the tanks early on, but having them on the table was a huge boost to my defense. They hid behind the woods, while the ITVs and M109s did most of the firing. And it was not the best of firings, as T72s were bailed everywhere with only trails of smoke to testify to my shooting step. 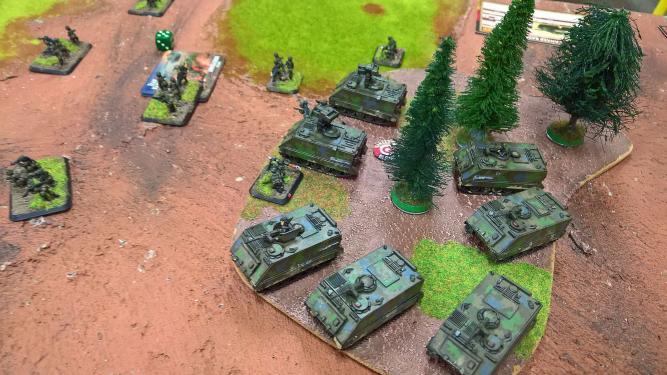 Task force Bastion makes sure the trees get sufficient CO2 for their chlorophyll synthesis processes.

The Warpac forces reeled from the onslaught but were not blunted. The BMPs tried to blitz but failed miserably, so were unable to return fire (as if they moved they wouldn't fire missiles and the cannon was out of range). The tanks to my left advanced once more and the ones in the centre realigned to engage my troops, keeping an eye on the Abrams that were ready to pounce on the tank line as soon as it was weakened. However their firing was appalling, as the low ROF available and difficulty to hit allowed most of the M113s to live to fight another day. The artillery OP was unscathed. 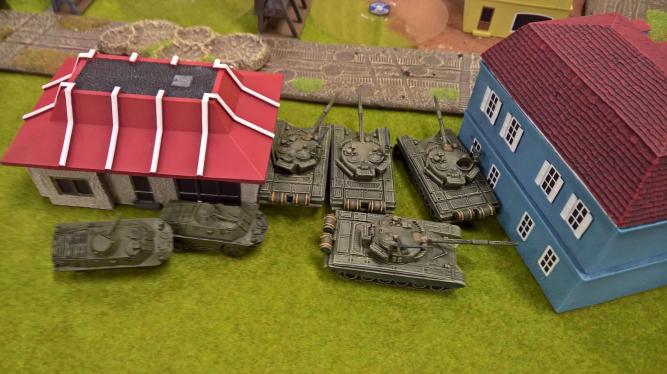 Just HOW many tanks do you think you can park behind that building?

I didn't get any reserves in the following turn (not that I needed them anyway!) and decided to fire with everything to make every shot count. The Dragons were trained on the BMPs and destroyed 2 and bailed another; they were joined by the ITVs for another two casualties. There were fewer T72s available for target practice, so the M109s fired at the Shilkas, which would have had the infantry in range the next turn, but only destroyed 2.

In the next turn, the Germans were able to bombard the defenders of the woods with the Carnations, killing two squad members and destroying one ITV - but thankfully not the OP!
The infantry occupied the blue building and the factory, heading towards the wooded area screening the Abrams. While they had no chance of destroying them in any case, as long as they could put them under pressure they would be able to divert them from taking pot shots at the T72s. 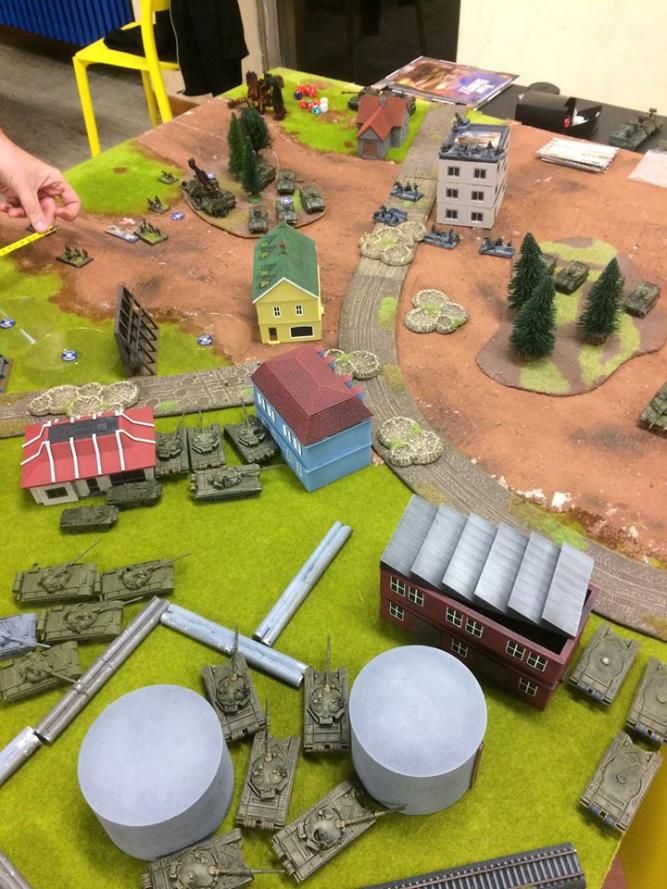 The advance is stalled by missile fire.

I got a scout unit and the VADS from reserves - the extra TOW would definitely come in handy.

Feeling the need to make something of those 27 points I had spent on the tanks, they moved in sight of the T72s and let rip - but only destroyed one as my opponent made some really decent save.
The infantry unpinned and fired again on the remaining BMPs, destroying more. The M109s were employed in a more traditional fashion, bombarding the blue house with scores of infantry teams inside.

The infantry failed to unpin and that made for a very quick, but eventful, East German turn. One of the Abrams was brought down by the T72Ms - you cannot beat a roll of 1 to save at short range! The two remaining Shilkas destroyed the second ITV, granting the first destroyed unit to the attackers. The mech platoon was again bombarded but this time they all passed their saves. More importantly, the OP was brought down by the frustrated T72s. To achieve that, however, they had put themselves in a very awkward position. 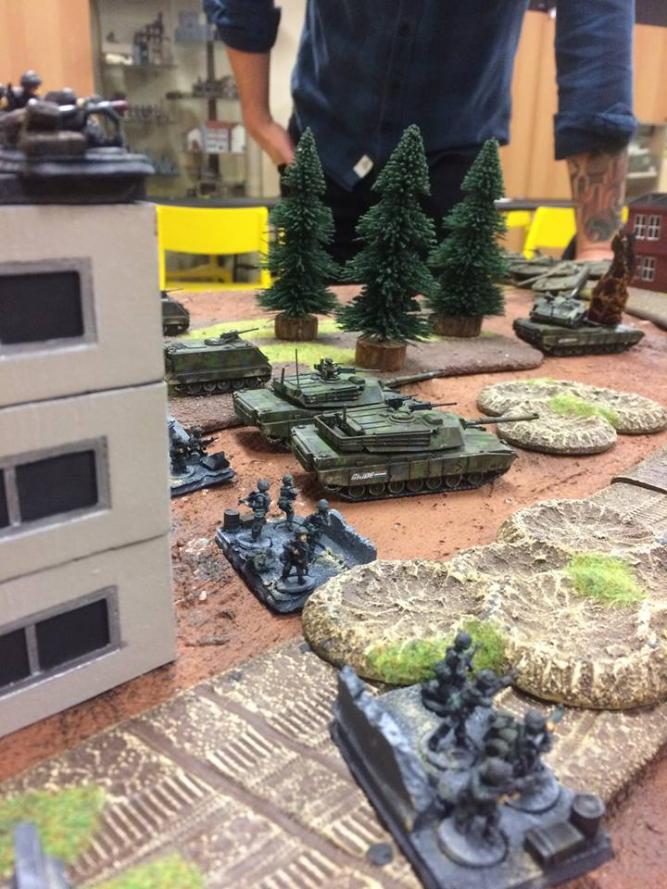 The Abrams crews recover from their losses and avenge the destroyed tank.

The last scout unit entered the game, passing a blitz check to drop a long range missile on the T72s, blowing one. Not bad for starters!
The mech platoon leader directed the fire of the M109s which, despite the loss of the OP, were still able to bombard the infantry in the building, inflicting three casualties. FP 2+ really made the difference.
The Abrams platoon, red faced in shame, showed the communist crew what it means to have a tank with aircon and proceeded to dismember a full T72 platoon single-handedly. At short range the 105mm gun was good enough to punch through the inferior armour.
The Dragons wiped out the BMPs and the Shilkas, effectively freeing the front objective from enemy attention. 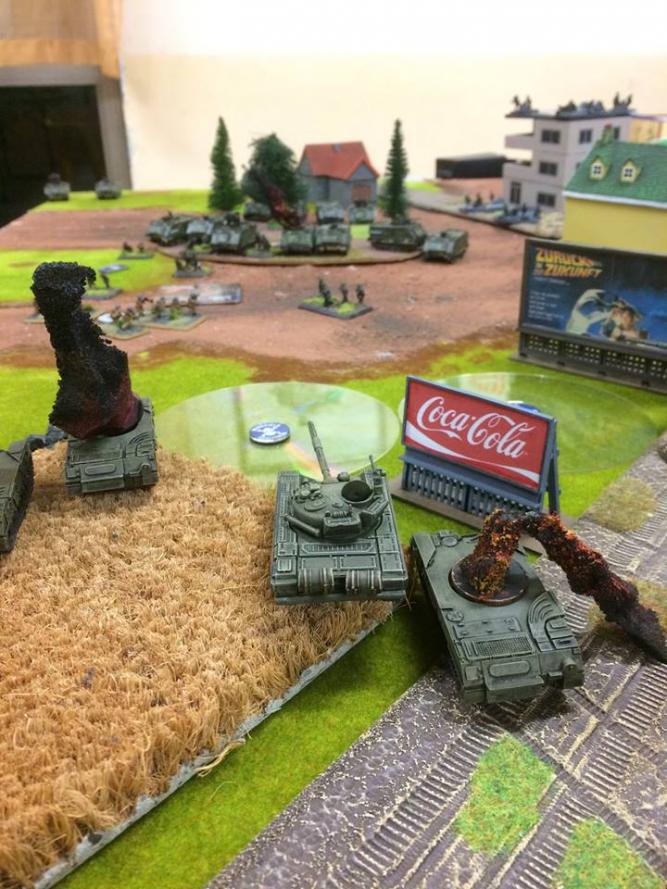 You know the situation is dire when the Commies have to hide behind Coca-Cola billboards.

The Warpac infantry unpinned and moved from the blue building to the yellow buidling, to launch a follow me! order and attempt a last ditch assault on the objective to the front. To perform such a feat, though, the Germans would have to destroy or bail all the M113s that were still there to provide defensive fire.
To do so my opponent moved his BRDMs to generate more "to hit" dice as the attacking forces were dwindling fast.
However, despite all their efforts, they could only bail two transports. As the infantry was pinned by the artillery the motor company decided to assault anyway and they DID manage to do it. My bad luck with defensive fire was compensated by the complete inability to hit anything in assault. My troops counterattacked thanks to the presence of the CO and the GIs fought with the savagery of lions to defend the objective, killing 4 enemy infantry and chasing them off.
In my turn, the M113s remounted and wiped out the Germans in the open while the Scout TOWs and Abrams finished off the tanks. With only BRDMs being able to put up a fight, my opponent conceded.

All in all I enjoyed playing the US army but I don't think it suits my playing style. Maybe I should try a LAV company aided by a mech force to have stronger units (such as the TOW LAVs, which are super hot) and a force that is capable of attacking too.