So another week out for work, another rushed batrep. The Soviet players being busy playing ancients, I requested the presence of a guy whose army I painted for a quick and dirty affair!

With only 40 points choices were kept at a minimum and both players tried to trump the other guy's list. I picked tanks and super-heavy AT prowess, while Cristian went for missile power. We played encounter so very little was on the table from the start. 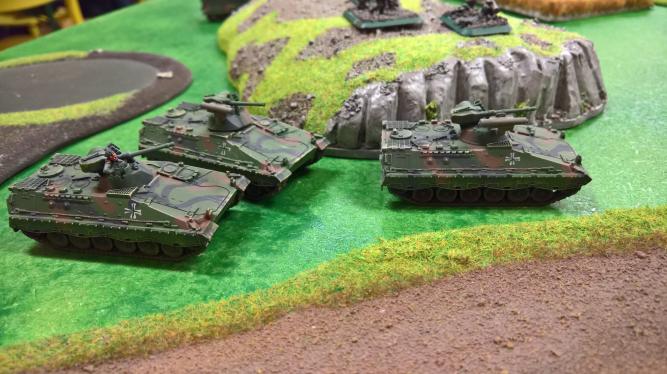 East Germans apparently at ease in their "borrowed" vehicles.

I decided on purpose NOT to have my precious few tanks on the table because I knew the missile capacity of my opponent would bring them down easily. So I maxed out on small, elusive, high-ROF assets I had to whittle them down before bringing in the heavies. Even the big, nasty Jag Is were no match for the Scorpions' guns - provided they made it there... 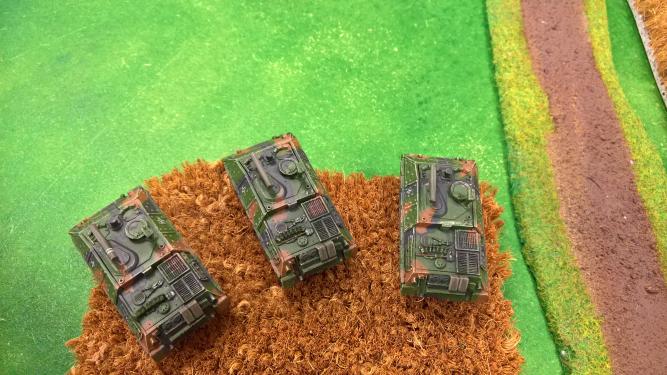 With very little on the table, the first moves were very uneventful. The village in the city centre hid most of my tiny vehicles to the captured German missiles and having a 2+ blitz move with the HQ unit I was pretty confident I could wait to fire until I could cause mass damage. On the German third turn, with no reserves turning up, Cristian decided to lure my recce in sight by exposing the Luchs. If the ruse worked, the Jaguars would have got something in sight. At some point. Maybe! 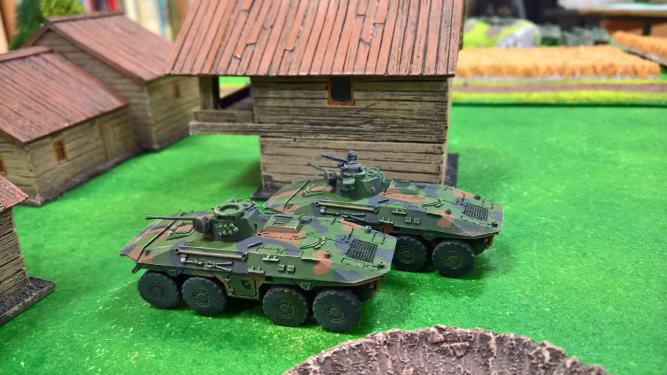 In the rest of his shooting step, missiles were sent streaking at the scimitars but they were unharmed. Cristian regretted not having the Gepards from he start - he thought missiles would have been more useful but not being able to fire on the move was a real liability. 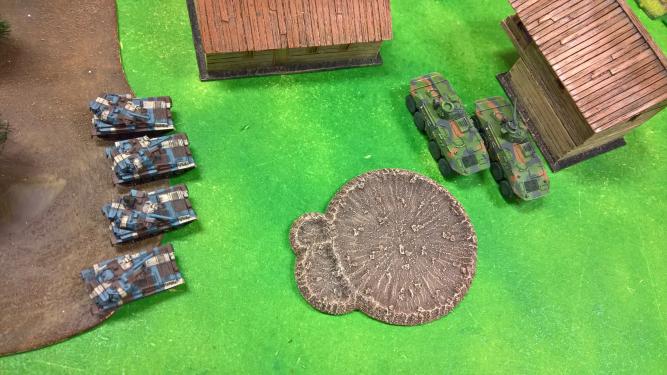 Size does not matter!

Maths gave me one destroyed Scorpion for the loss of the Luchs so I went for it. Blitzing through the wood I passed all the bog checks and swiftly annihilated the armoured cars. The Scimitars were itching to do the same to the Marders but could only destroy one from their position, escaping retaliation.

I didn't receive any reserves this turn either. Maybe my camouflaged opponents were working in the rear lines as well?

The Gepards rolled in but fortunately not from the corner that had LOS to the Scorpions, so they advanced towards the centre at full speed, backed by the infantry and surviving Marders. Unfortunately both transport units failed to blitz on 3+, which made their firing pretty bad. It was not bad enough to avoid suffering casualties though; two Scimitars were destroyed and two bailed. The Milans missed and the platoon hung on after passing the morale check.

On the other side, a significant swing of bad rolls ensured my Scorpions survived. Two were hit by the Jaguars... and both were only bailed! It was very important for me to have the Scorpions in working order or I would be risking a formation check the following turn if I suffered any more casualties. Spending 50% of my force in divisional assets was showing its weaknesses.

In my turn I finally got some reserves - the Strikers made it on the table (not on the pictures though, they're not even primed! Sorry) and blitzed with a view to the Jags. The Chieftains failed to blitz and so moved out of sight, ready to poke out as soon as the Milan-armed infantry could be pinned by MG fire.

The two Scimitars remounted while the Scorpions didn't. It was good news because the Scimitars would be doomed if they didn't destroy the Marders in front of them. 6 shots later, the whole Marder platoon was dead or bailed and they fled.

The Strikers scored two kills and the Scorpions finished off the platoon of tank hunters. I had had a very good turn of shooting despite the tanks being unable to put their weight into the fight. 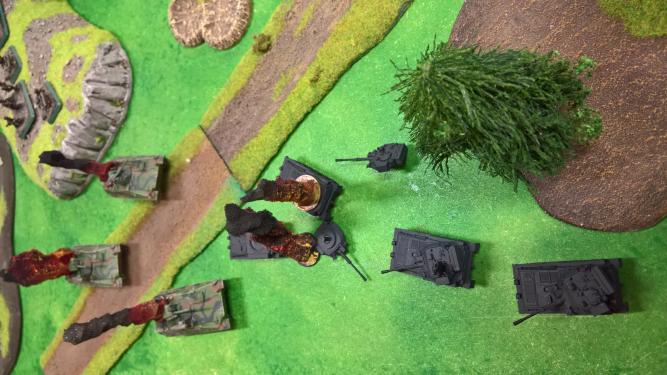 Well, sometimes it DOES matter, but it doesn't last!

The Germans got all of their artillery, which was parked right in front of the undefended objective (previously occupied by the Jaguars). With only two Marders and the Gepards being able to carry a mobile war, he made what I consider a very bad move by focusing on the weakened Scimitars instead of firing on the Strikers. The Scimitars could have been dealt with by the Milans (while being overkill!), which were trained on the Strikers and failed as they only hit on 6s. Gepards could have moved in a position that left them without cover so they would have been easy prey. Of course the Scimitars were vaporised by the German guns, but it was a poor result for such an expensive unit. 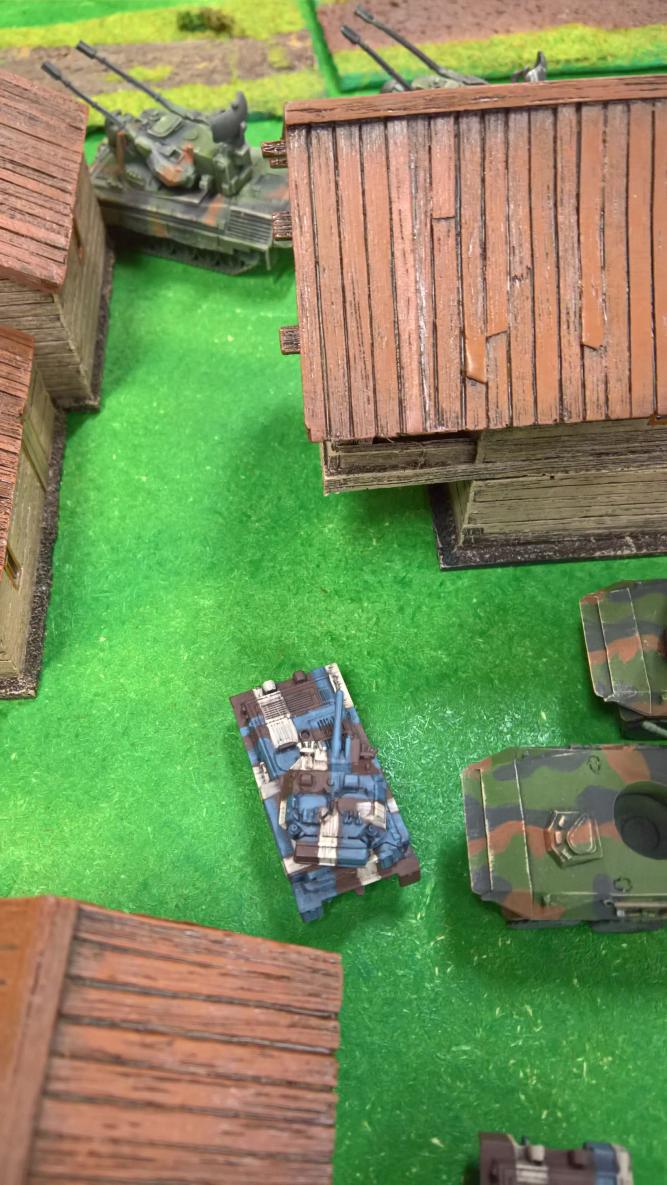 Say "hello" to my little friend!

The next was the critical turn. I got the last unit (not that it mattered as my opponent didn't have any air support), successfully remounted the Scorpions, successfully blitzed the Chieftains which then proceeded to use their stabilisers for a craxy 4"+10"+4" move to fire at the Gepards in the open! 3 shots on 5s destroyed two and the rest was put down by the Scorpions. The Strikers sent missiles at the last Marders, so my opponent was down to infantry and artillery. He couldn't win, but he could still force me to draw... 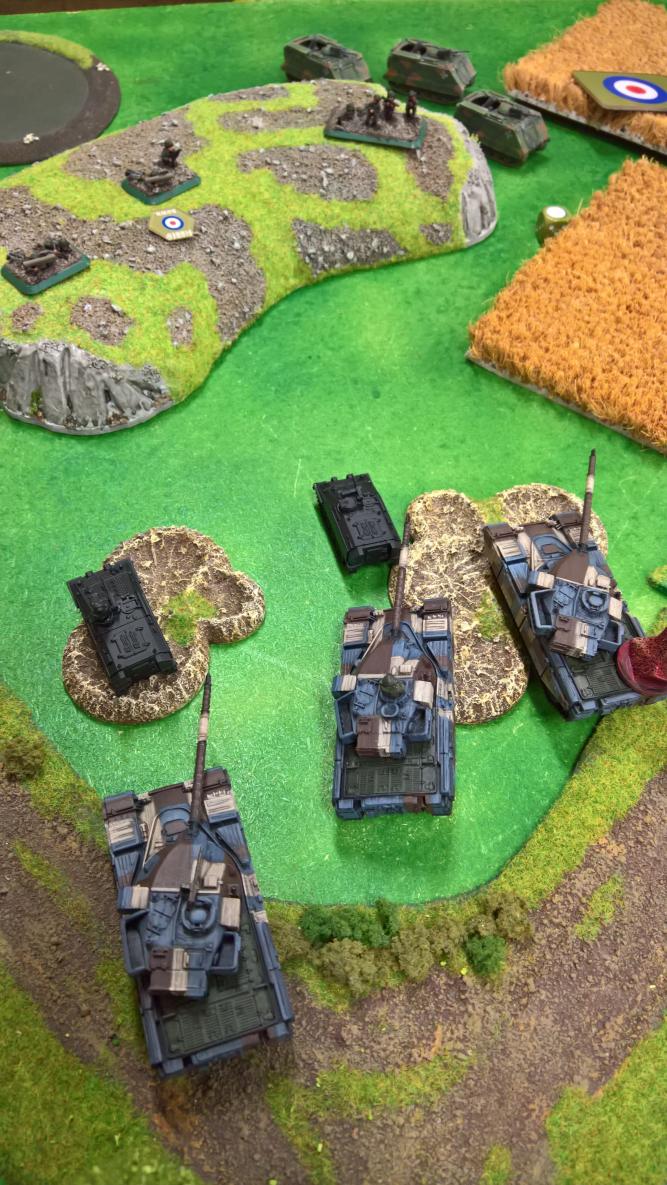 Please, let me introduce to you my associate FV4201.

The Germans, keeping their cool as usual, simply threw missiles at the tanks. One was knocked out via double bail but the rest stood. The artillery fire failed to inflict damage and at this point it was really a battle of attrition between me and the Milans!

The Scorpions and Spartans joined the fray to add MG fire. The first platoon was pinned and was heavily battered by Brutal shots. The second infantry platoon was harassed by the Strikers' MG but no casualties were inflicted. What was worse, they stayed pinned. The damaged platoon recovered but failed to destroy another tank, while the M109s blasted one Scorpion to twisted metal sheets. 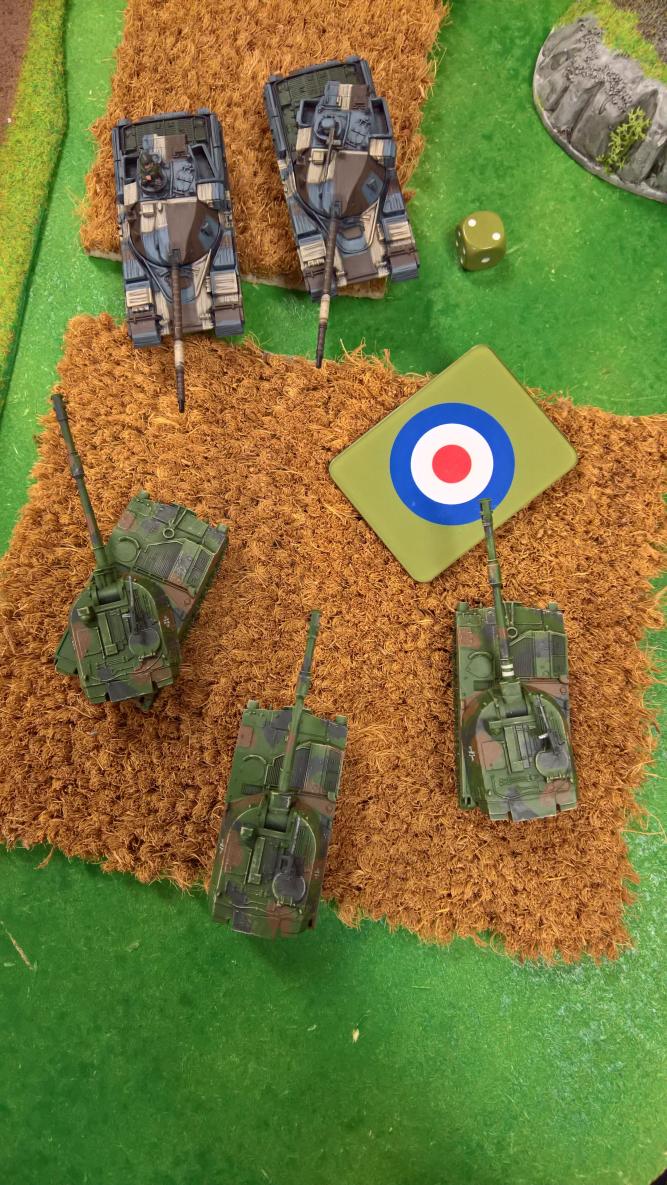 Warning: the image contains a lot of Brutal guns.

Pressing on with the attack, the infantry suffered another round of shooting and was left to one Milan team, which was later assaulted by the two Spartans (defensive fire, ha!). The Scorpions killed two infantry teams from the other platoon with some lucky rolls. The platoon recovered from pinning and killed another Scorpion but this time the 109s couldn't add more casualties to the tally.
Soon everything was over as in my turn the HQ teams captured the now undefended objective, while the Chieftains parked themselves right in front of the artillery. The combined firing of the tanks and Strikers saw them off and with that, the game was over.

All in all small games can be great fun, but if I had lost two more vehicles at the start (not exactly a difficult event given the power of the arsenals available) the match would have been over by turn two, so it's better to be ready for a rematch!