Thunder from the skies

Major Viktor Bezuprechnny surveyed the battlefield from his Mi24 Krokodil helicopter. The decimated ranks of his Desantniki (Afgantsy veteran paratroopers) were as ready as they could be. Their goal was to seize a vital crossroad leading into Hanover. Rumour had it the decadent British had the help of their colonial lackeys, the Australians, although manning false German vehicles. He shrugged, one degenerate NATO soldier was the same as another when you were pulling your bayonet from their lifeless corpse…

“Put us down just before the crops there, tovaritsch. We are more than comfortable on foot and will summon you when we need you”
The Mi24 Krokodil Lieutenant grinned at the poor attempt at humour, half relieved with his daydream of being found unecessary for the battle ahead. He knew Bezuprechnny had only mauled companies left out of his Battalion and his own squadron of Krokodils was down to eight helicopters. Down below he saw the forward element vehicles of the Tamanskya (2nd Taman Guards) Motor Rifles scrambling to catch up with the rush of the Krokodils. He counted and came up short for the lead company with it’s BMP2 recon.

Today was going to be a long day.

Soviets
First Formation – Afgantsy :
HQ – 1 AK74 team
2 single platoon companies, each with a Spigot team and one with a Gremlin team
2 units of 4 Mi24 Krokodil

I faced a new beginner team of :

Tracked Rapiers were taken out early along with the Recon BMP-2’s and the Storms. Hinds arrived turn 2 from loitering and took out two Leopard 1’s, commander joined the remaining leopard and ran for it. That was the end of the Leopard formation.

Chieftains and Brit infantry badly mauled the larger of the Motor Rifle units, bringing it down to four stands plus the HQ, but the BMP’s went off rampaging and tore apart the Panzergrenadiers and Rolands.

After losing one of the Hind units, the remaining Hinds sorted out the Chieftains and this meant all that was really holding on was the Brit infantry which the Soviets wisely ignored. It was a huge whirling fight and the Hinds more than carried the battle with the BMP-2s being second most valued unit type on the field. We stretched the rules a little to help out new players by allowing both lists to have support AA units on table to cope with eight Hinds. The Harriers arrived once from reserves and killed a single BMP-2 with one RPG team also perishing in the air strike. This did cost an Aussie Mirage which were filling in for the Harriers that was shot down by a Gremlin team. Fantastic fun and lots of laughs as this was Lachlan’s first game and Paul’s first game with British (he normally plays US tanks)

Major Bezuprechnny scratched at the carbon buildup on his AK, trying to ignore the carnage around him. This had been a tough fight but his Desantniki had done him proud. He knew deep down his troops needed a rest and a refurbishment for the time being.

A glint came into his eye as he observed even more fresh BMPs bringing in nervous looking conscripts.

“You there. Come over here, we need to talk, comrade Captain”.

Today was looking better and better, especially with the high rise of Hanover in sight. 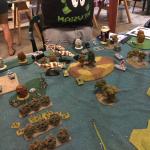 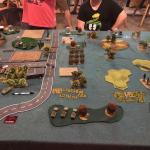 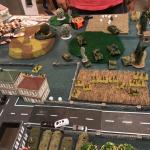 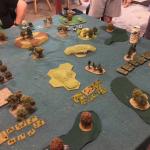