Major Bezuprechnny shook his head. This was going to be tough. He had carefully co-ordinated his forces only to see the wily American Marines had gotten the jump on him.

After his success at Hanover, Stavka had been pleased and summoned him to the Theatre Commander who had offered him command of the spearhead Battalion from the 2nd Taman Guards Motor Rifle Division. This was a rare honour and one he couldn’t pass up, particularly with his own Desant battalion of paratroopers being badly mauled. Sadly a promotion didn’t come with the added responsibility.

He had again been given a battle tested force which had the task of pushing through an identified weakpoint in the American lines. This area had been identified as newly taken over by US Marines and with such a rushed defence, they hadn’t had time to sow the mines that had caused so many issues in the past.

The plan he had put together was brilliant yet somehow the enemy had the answer. Sending the larger of his two motor rifle companies up the left flank, facing a strong US infantry platoon entrenched in shell scrapes on a hill, while his depleted motor rifle company probed to the left. Against the protests of his NVA tank company commander, he had assigned one unit of three T55’s to support the right flank while two more units of three T55’s went with the commander to probe the more closed up left flank, following on from screening BMP2 recon unit. With Spandrel BRDM’s in the centre in a woods and Storm tank destroyers he felt he had covered his advance.

Then the Imperialist heavy armour arrived.

Aghast, Viktor watched as the five American Patton tanks seemed to arrive from nowhere, guns blazing. In short order, a unit of three NVA T55 Panzers were burning wrecks, along with two of his three Spandrels. All before firing a shot. Before he could dwell upon the horrors being broadcast over the open radio net, Viktor heard the ominous whistle of incoming artillery – right among the parking lot of assembled BMPs and BRDM2s waiting for the order to advance. Fortunately near misses were the order of the day, with only one BMP a complete write off.

To make things worse, a platoon of boxy SPAA guns trundled into view from an industrial area, spraying his recon BMP2s and the now-empty BMP2s of the understrength Motor Rifles.

Again, he considered himself lucky that no permanent damage was done, with some of the crews shocked by the violence of the gunfire.

Lieutenant Danilov, the Scout platoon commander was quick-witted and rapidly barked out orders to get his unit back into the fight. The BMP2 transports followed his example and joined the fire into the enemy AA unit, turning their aluminium hides into molten slag.

Viktor smiled to himself as he called in the Krokodils he had held back for this sort of contingency.

In short order, the Pattons were no more than steel coffins aflame with the pyres of their crew.

“That should make the idiot Knispel happy” muttered Viktor.

The Hauptmann in command of the NVA tank company kept going on and on about some famous uncle of his, a supposedly famous tank commander also named Knispel. It was incredibly annoying to Viktor and the other officers in the battalion.

Hans-Peter Knispel’s face turned into a wide beaming smile upon hearing that the Krokodils had achieved what his own tankers couldn’t.

“Achtung, mensch… PANZER MARSCH !” he exclaimed into the radio.

The remnants of the NVA panzers, moved off, hunting Capitalist M109 artillery as they left the BMP-2 scouts of Danilov to go hunting for the American 8 wheeled armoured cars. Although irritating, they hadn’t lost much to the fast moving Marine light armour. Burping 30mm automatic cannon could be heard in the distance as Marine aluminium armour failed to keep out Soviet discarding sabot ammunition.

Knispel urged on his crew as he sped past floundering ‘kameraden’. Not for him the slow route through the trees on the left flank, he was going to show the Soviet comrades how a real Panzerkanonen got things done.

“Ausgezeichnet !!” (excellent) yelled Hauptman Knispel as he uncovered the American stash of bourbon. So this is what they were protecting, he thought. Worth the butcher’s bill.

In the meantime, the ferocious but largely ineffective artillery barrage had pinned his company of infantry and no amount of coaxing would persuade them to move forward. Marine rocketeers were slowly picking off the ten supporting BMPs. WIth only five remaining and no stomach for a fight showing with his dismounted infantry, Viktor was feeling panic start to set in personally.

As though a lighting rod to stir his troops into action, the woods came alive with rockets and yelling American Marines.

Before he knew it, another BMP had ignited and scurrying Marines had cooked two more.

Fortunately Viktor was no stranger to surprise attacks from his days as an “Afgantsy” in the mountains. He directed PKM teams and AK gunners to fire with deadly effect into the charging Americans, stopping their attack dead in it’s tracks. This seemed to galvanise his troops into action and they followed the remaining two BMPs and four BRDM2s into clearing the American infiltrating platoon.

As they machinegunned the last of the relieving forces, Marine Hummers rushed to the front, desperately trying to stem the tide on the back lines.

Spandrel from woods, 30mm cannon from the left flank, all conspiring to prevent the light vehicles from saving their foot brethren.

Realisation came over the American commander and his troops slowly started to slip away, covered by a mixed group of TOW carrying Hummers.

As a parting shot, one TOW missile streaked through the skies and tore apart a precious Krokodil.

“Final act of defiance of a beaten foe” murmured Viktor.

He threw his helmet down and surveyed the field. It had cost them a total of ten BMPs, almost a platoon of infantry, five of the T55s and the three Spandrel armoured cars as well as the Krokodil but the way through the Hof Corridor lay open. Two of the units would muster for parade no more.

Scattered over the battlefield was a LAV platoon, full M60 platoon, M109 battery of three guns, Vulcan M163 platoon, the bodies of a full Marine platoon and an MG platoon. Escaped were two TOW HMMV sections and most of a Marine platoon. 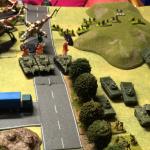 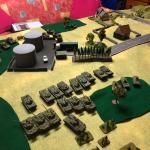 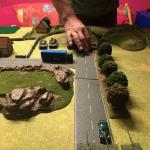 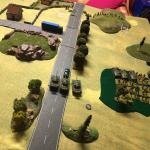 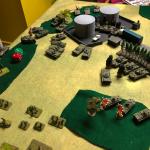 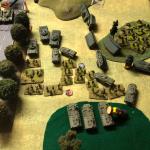 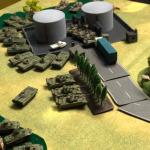 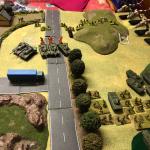