My game against Lord T and his Soviet Afgantsy force was actually Round 3 at the Victorian Team Yankee Championship held at the Conquest Gaming Convention (Melbourne Australia) over the Easter holiday long weekend.

The mission scenario was Free for All selected using the More Missions scenario selector with the Soviets attacking (naturally electing to attack during daylight hours!)

I set up two of my Scout units and the smaller of my M1IP tank units on my right flank concealed as best I could in the small forest located near the my defensive objective on this side. I then deployed my Chaparrals along with a Scout Platoon in the larger forest on my base line located approximately half way along my table edge with the hope to provide some air protection covering the whole table while being close enough to be thrown onto either objective should the need arise (or be desperate enough)

My opponent (naturally) set up his infantry on both of the objectives he was to defend and similarly placed his artillery and AA units in concealing terrain about mid way along his table edge.

My main thrust was going to be along my left flank where I deployed the larger of my two M1IP tank platoons, behind a concealing hill, along with the VADS to protect them from direct fire in the first turn. The idea was when the big push came, the VADS would try to keep up with the tanks and provide some mobile air cover.

Alternating deployment allowed Lord T to see where all my forces would be deployed and he was able to position his tanks and anti-armour assets in concealment & cresting hills ready to meet the inevitable US advance across the battle field.

Turn 1, the Soviet artillery ranged in on the forest where my Chaparrals and Scout Unit were hiding in, failing to hit the Chaparrals but destroying the Scout Unit protecting them. The Soviet Hind gunships swooped in on my smaller tank platoon defending the objective on my right flank. This was well away from the VADS and the only AA defence would come from the Chaparrals and the Abrams themselves. While the Chaparral fire was ineffective, self-defence AA machine gun fire from the tanks was able to bring one of the Russian choppers crashing to the ground. The tank crews had little time to celebrate before the AT Spiral Missiles that streaked from the Hinds destroyed this Tank Platoon.

Now with a very weakly defended right flank (two Scout Platoons), my only hope was to push home a very rapid advance on the left flank. Both my M1IP Abrams platoon and the VADS platoon failed their Blitz moves, but the advanced on the Soviet objective facing them opposite.

Turn 2, The Soviet Hind Gunships repositioned themselves to a new strike position above the larger of my tank platoons. Soviet T-72 tanks rumbled forward to take up firing positions cresting the hill near their defensive objective. The concentrated salvo of fire from the defending Soviets destroyed three & bailed the last of the VADS which subsequently fled the battlefield. The Soviet artillery which was already ranged in, repeated the bombardment on the woods that contained the Chaparrals. This time the result was the destruction of both of the Anti-Aircraft missile carriers. This left the path largely clear for the Hinds to let loose another volley of anti-tank missiles. Despite defiant self-defence AA machine gun fire from the Abrams which brought another Hind crashing to the ground – all four US Abrams tanks were destroyed as the missiles slammed home into the weaker rear armour.

Credit to my opponent who played a very well executed game which (unfortunately) my US were not much of a challenge for once he had silenced my Anti-Aircraft units. 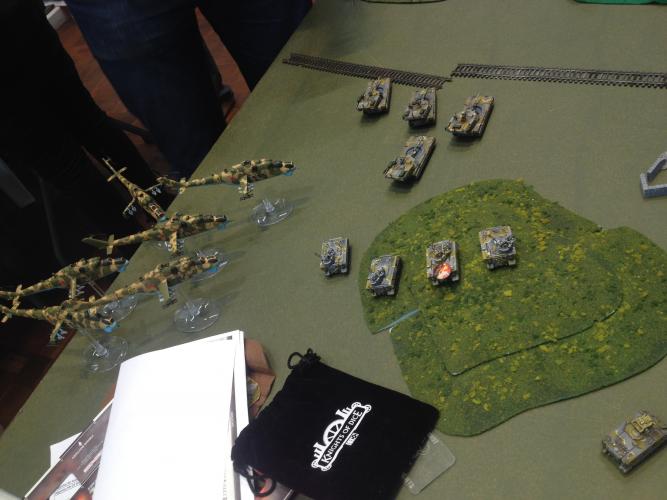 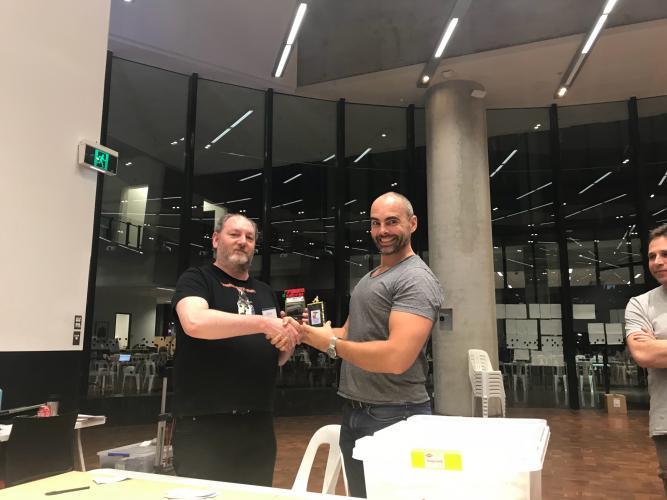 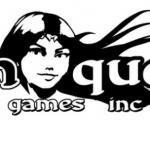 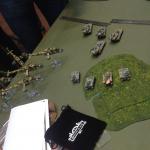