Replenished and Destroyed at Amsterdam

Ok my last game against Lord T did not go as well as planned & was over very quickly.

So quickly that we had time to play again. In this last game I had expected my opponent not to take air & AA as he had done in the last time we played and I was completely overwhelmed by a swarm of Soviet Hind Gunships.

Not a good start….at least it was night.

I elected to keep the tanks in Ambush and hoped that my Scouts would live long enough against the Hinds to keep me in the game.

The Soviet first turn had two platoons Afgantsy Infantry moving up quick to take positions in buildings just threatening my half of the table – well not quite both platoons made it into the buildings…. 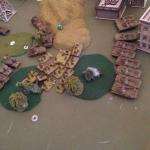 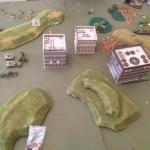 With a platoon of Afgantsy Infantry left in the open and under the cover of darkness, I revealed my ambush. 3 x M1 Abrams tanks came roaring out from behind buildings to machine gun & assault the unsuspecting platoon, reducing it to 3 teams. 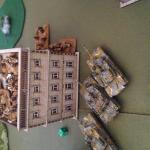 The Soviet turn two was devastating. Under the cover of night and nestled close to tall terrain I was hopeful that one or two Abrams might survive. Alas when the Hinds let loose their hail of anti-tank missiles all three tanks were left burning. 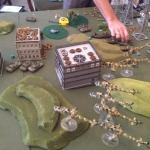 As it was still night and with no thermal imaging on the VADS - I rolled the M163 unit forward to be within 24 inches (spotting distance at night) so I could fire on the Hinds. Those rounds that hit the target either bounced off the Soviet Gunship's armour or failed fire power.

Ok - this was a mistake. The Hinds had fired the previous turn & I didn't need to move forward to spot the Soviet Gunships which sacrificed almost half my AA dice. 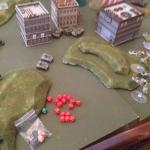 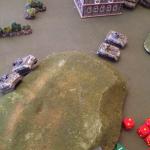 The Hind Gunships moved to a loitering position. Soviet reserves arrived. The Soviet infantry RPG7 and Spigot missiles took a toll on the Scouts and VADS units.

No reserves for the USA (Desperately needed Air & Tanks remaining in reserve) Spitefully - the remaining M113 and M163 concentrated fire on the Afgansty Infantry platoon in the closest building - for no result. 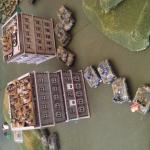 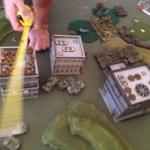 More Soviet forces arrived - along with daylight. No reserves arrived for the USA. The Soviet forces eventually ground down the last few Scout Platoon and VADS teams with RPG and Spigot fire without having to resort to the Hind Gunships. 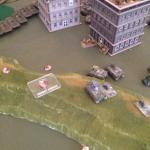 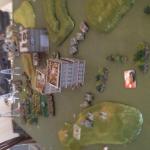 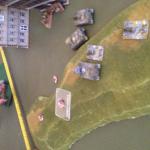 I think that I will need to go back to the drawing board with 80pts lists. (Also definitely worth reading the campaign specific missions and building a list to suit mission specific rules)