A very battle-weary General POTUS mentally took tally of the forces available to him. His mechanised team had suffered badly and attrition had taken its toll. Not only were his forces severely depleted, they were also made up of a mix of replacement vehicles and repaired battlefield salvage – only 4 operational Abrams which were a mix of M1IP and the classic M1 tanks – the only reserve were to be a pair of ITV scout sections which were less than ideal for the task of digging out dug in East German infantry. 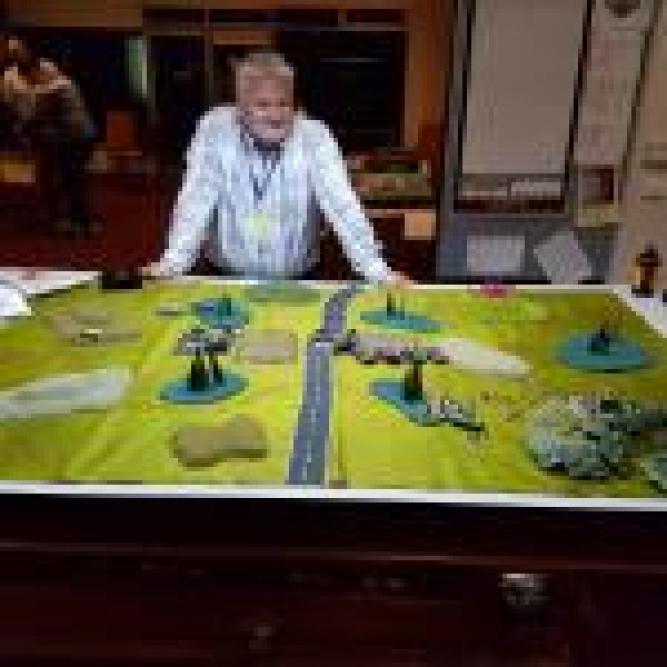 Under the cover of darkness, the American tanks rumbled forward towards the dug in East German infantry. General POTUS knew that in the little time he had before the dawn he would have to crush Comrade Leadgend’s dug in infantry – because come day light, their BMP armoured transport would put their anti-tank missiles to very good use.

Luck was with the Americans – electing not to fire on approach, the night effectively concealed Abrams the tanks from any BMP fire. Driving into the middle of the East German dug in positions & shrugging off RPG fire the American Tankers failed to cause any casualties before their nerve failed and they withdrew from the Assault fleeing back into the night. 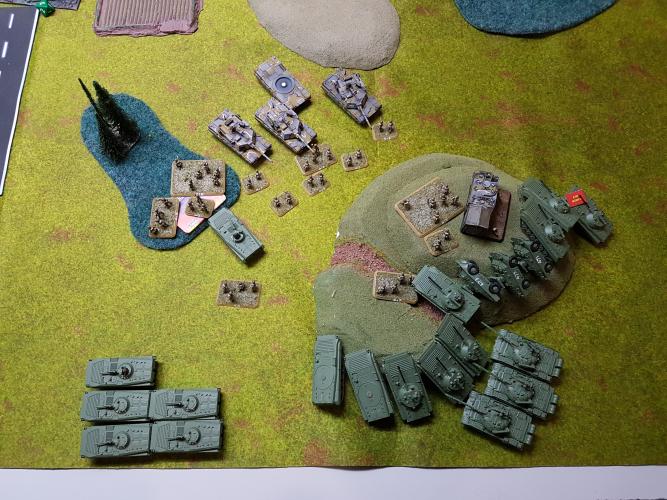 This withdrawal put the Abrams deep enough back into the night that they were once again completely concealed from BMP anti-tank missile fire – allowing the tankers to regroup and assault the East German Infantry anew. This time, the East German RPG defensive fire was able to disable one of the American tanks which was captured as a war trophy when once again the American nerve failed again. 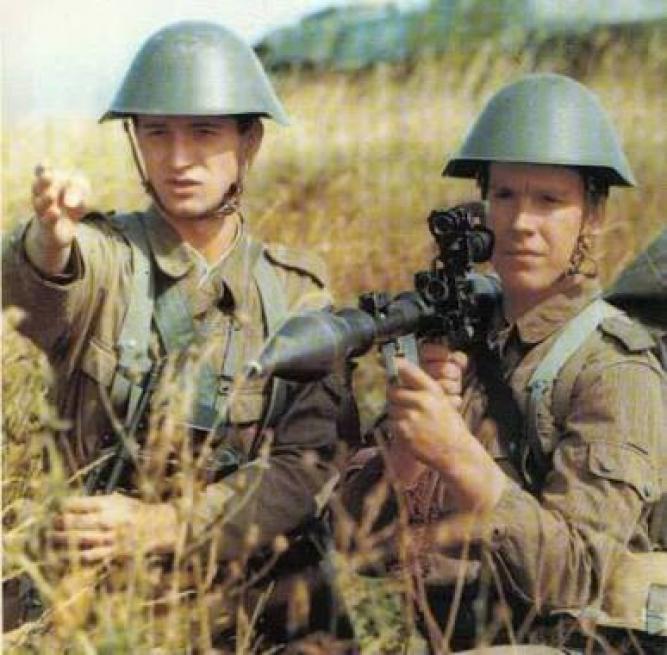 With the coming of dawn, Comrade Leadgend’s BMP and Spandrels now had targets. As the result of the incoming volley of missile fire a second M1IP was taken out of action. Surprisingly despite the being a focused target for fire, the older M1 classic Abrams were able withstand hit after hit and remain operational. Return fire silenced the Spandrel unit, but this was not a fair trade for an M1IP main battle tank. 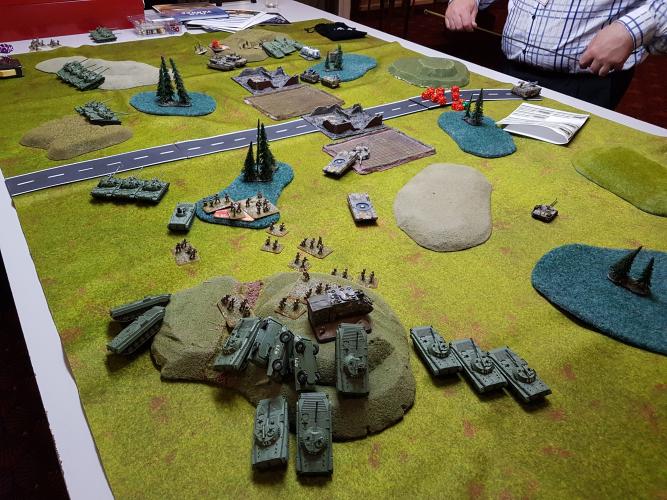 Comrade Leadgend sent his second motor infantry company on a flanking manouver mounted in their BMP transports to threaten objectives in the American rear. This forced the remaining two Abrams tanks to break off their ineffective assault and redeploy to protect the rear echelon.

It had become a foot race – unfortunately one which the East Germans had a handy lead. Disgorging their infantry they pushed hard on the American defensive objective. The General POTUS’s first ITV scout section had arrived, but was quickly dispatched as was the HQ M113 hidden in the forest. 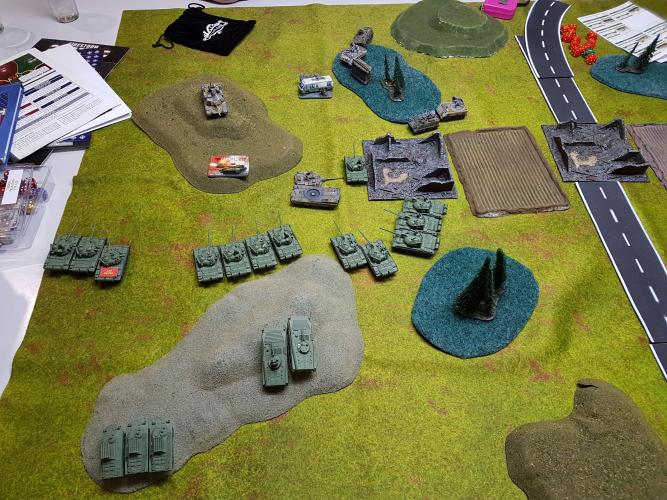 Heavy casualties to the East German Infantry did not slow their advance, buoyed by the sound of T55 tank reinforcements at their rear. Encircling T55 and BMP were able to get flank shots on the remaining two Abrams, bailing out the M1 Abrams crew leaving only a single M1IP tank operational. Having planted the flag of the GDR on both of their objectives, the battle looked like it would end here…
…but desperate machine gun fire and assault from the lone M1IP was able to dislodge the East German infantry, with the last survivors remounting their BMP transports & fleeing the battlefield.

Despite their best efforts, the crew of the disabled M1 classic Abrams could not get their mount operational again. The circling T55 and BMP soon turned the immobile tank into a burning wreck and a similar fate fell upon the late arriving second ITV scout section.
Defiantly taking the high ground straddled between defensive objectives, the final M1IP Abrams faced a solid wall of advancing East German armour. The inevitable flanking by the T55 force found the soft rear armour, silencing the last American Tank. The East Germans had left no survivors…. 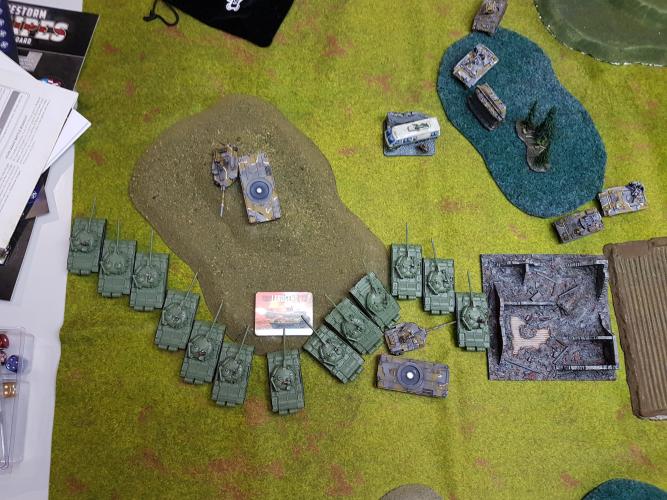 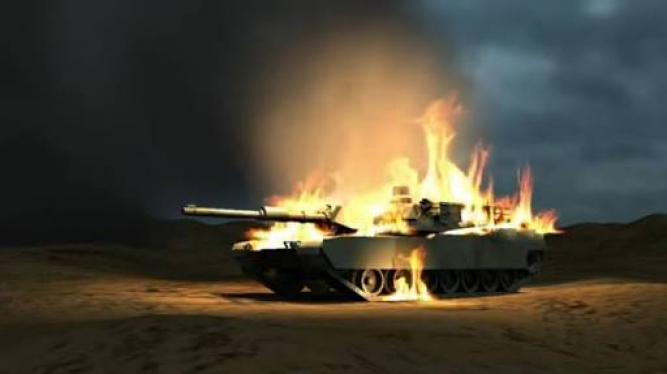 This game was played at the Monday Knights war game club as part of our in-house Stripes Campaign. As both Leadgend & I also had other games planned for the evening, we decided on a quick 40pt game and rolled up the Dust Up mission using the paper campaign set.

With battle arrows set, Leadgend rolled Dawn on the time of day table. My battle plan was a very simple one – roll forward at best speed while night held and assault Leadgend’s dug in infantry, choosing not to fire to keep my tanks concealed from BMP & Spandrel missile fire.

The assaults on the dug in East German infantry was spectacularly ineffective and costly – after three rounds of close combat, I think that only three sands of infantry were destroyed for the cost of a M1IP tank. When day broke – BMP & Spandrel fire destroyed another tank and my opponent started his push on my defensive objectives with his BMP mounted infantry.

This forced me onto the defensive – the motor infantry got to my objectives first. The game should have ended here, because my now only single operational tank could not contest both objectives. Luckily machine gun fire on the infantry in the open reduced this infantry company and it fled the battlefield with their BMP.

The advancing swarm of T55 and BMP eventually overwhelmed the remaining tank. My opponent had destroyed every unit on the table. Congrats Django for the good win! Result 5-2 loss.