Initial reconnaissance showed, that most of German vehicles (including all AA assets) are pulled to the city, leaving only few IFVs and small infantry detachment to guard railway station. So my battle plan was simple: split my forces so lighter assets would sneak upon German armor, while tanks with dismounted infantry support would rush forward as fast, as possible.
*Since my opponent moved all of his lighter vehicles save 3 Marders and Leo2 ambush toward objective out of his deployment, I decided to use my spearhead to move my BMPs, Shilkas and Spandrels to attack them, using high AT rating of BMP-2 autocannons to eliminate AA and use Air to destroy anything that still stands. Attack to his deploy were intended to force Leo2 appear far from AA and with some luck I intended to encircle them with my tanks* 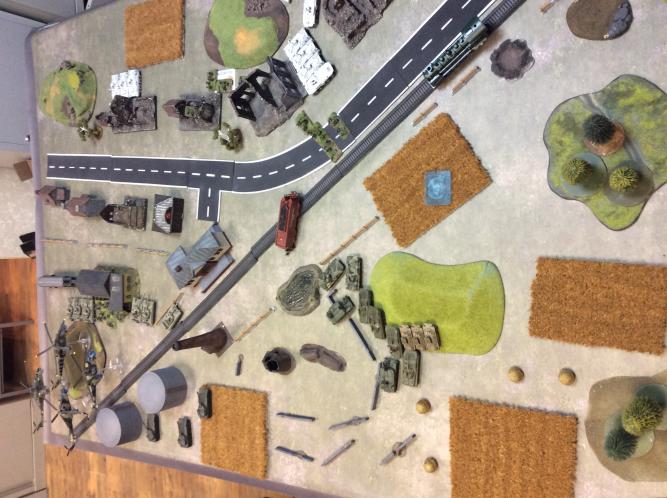 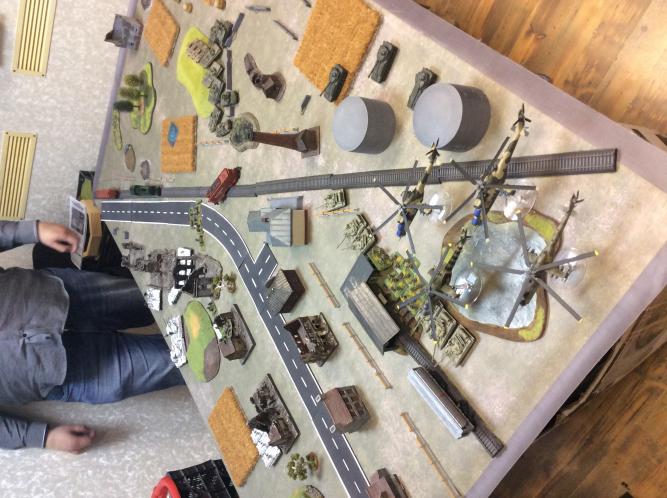 Initail deployment from another angle.

Recce teams managed to navigate BMPS, Shilkas and Spandrels behind ruins and fences, so when attack was signalled and our machines rushed forward, Germans were caught off guard. Initial volley was very successful, full platoon of Marders, one of Luchs and most importantly one Gepard were also hit by Spandrel rocket. On the other flank tanks and infantry rushed forward. One of tanks made a sniper shot to the Roland between hill and ruins, further reducing danger for Air support.
*Turn 1. No reserves, just rush forward and shooting, sometimes on 4+, sometimes on 6+* 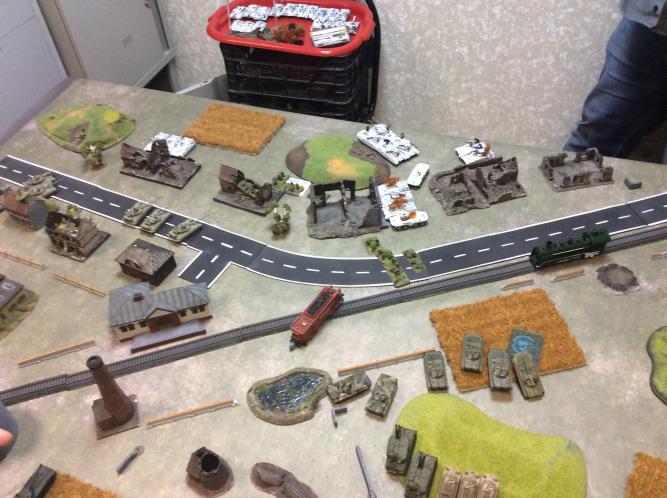 Return fire of German vehicles were greatly disorganized, even unexpected appearance of 3 Leopard2 tanks, not previously mentioned in reconnaissance reports, was not that devastating, as might be expected from surprise close fire, and Luchs and Gepards destroyed only 2 Shilkas, failing to hit MPS. On the other hand, German infantry showed great deal of discipline and all MILAN rockets hit our tanks, disabling 3 machines, though most of them can be repaired in few days.
*Leo2 destroyed 2 tanks and MILANs bailed 2 tanks and destroyed 1 in a platoon, which later failed motivation. BMP-2 were bailed, but none destroyed* 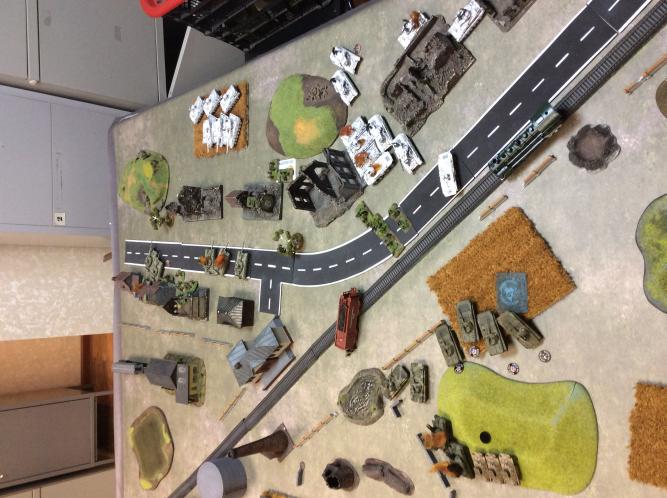 Last surviving tank pulled behind railway station to engage German support vehicles moving to confront lighter armor. Infantry still moved forward, but more cautiously. And now Air support was called in mass. BMPs-2 and Spandrels were given order to destroy or suppress AA whatever the cost. And so they did. 2 out of 4 Gepards burst in flames, one was perforated by shells, Roland was wrecked too. So when SU-25 attacked, only 1 Gepard was operational. Both rockets hit and 2 heavy tanks destroyed. Then was the turn of MI-24, but defensive fire and plumes of smoke from burning tanks interfered and only 1 hit to track were reported, though, it was enough for crew to abandon their machine without even thought to demolish it.
*SU-25 came out of reserves and I succesfully called them. 2 out of 3 Leo2 were destroyed, 1 bailed. Platoon held, but tank filed to remount the nex turn. The only operational German units were 2 platoons of infantry, 1 Luchs, 1 alive and one bailed Gepards and 3 Marders, guarding last tank* 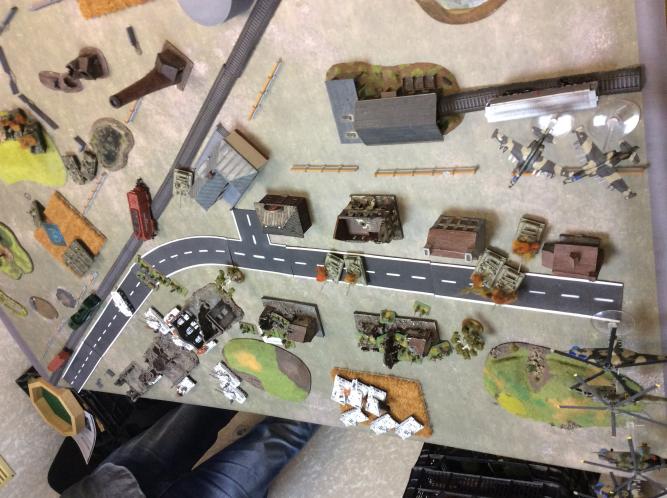 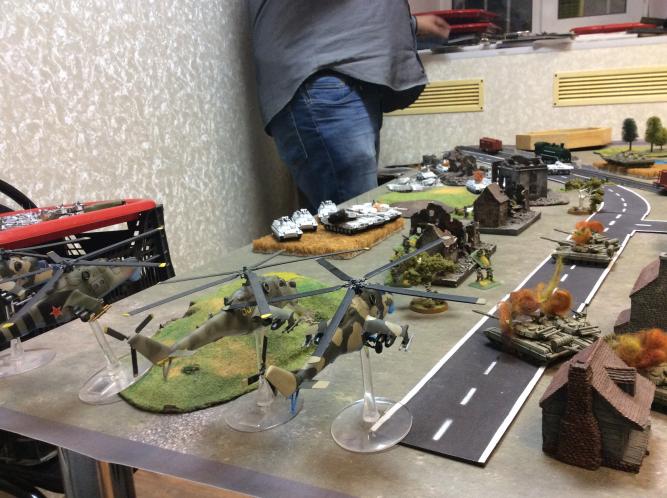 German infantry showed their skill again, destroying last tank, lighter AT weapons were directed toward Recon BMPs, destroying one and forcing other to retreat. One of the Gepards, came to live and in concert with Marders and even 2 MILANs damaged one of the Hinds, forcing it to crash land. Pilots were recovered quickly and safely, since ground were already taken.
*Bailed Gepard remounted and scored 5 hits out of 5 shots. I was not lucky with saves, but my opponent was even more unlucky with FP test, failing all of Gepards FPs to hinds, so helicopter was destroyed by 2 rocket hits.*

Finally, reinforcement started to appear, so another tank platoon reported in and started to move toward station. Infantry continued advance under cover of aviation, lacking targets, BMPs and Gvozdikas directed fire to infantry, but were absolutely ineffective. Su-25 and MI-24 destroyed 2 and damaged 1 of Marders, so infantry under command of Lt.Grachev braved German infantry fire and captured newest German heavy tank for study almost intact. For this action I recommend Lt.Grachev to be awarded Red Banner Order.
*On turn 3 came platoon of 3 tanks. Infantry charged to capture bailed out Leo2 and Marder, got 4 hits from nearby 2 infantry bases and 1 failed to save* 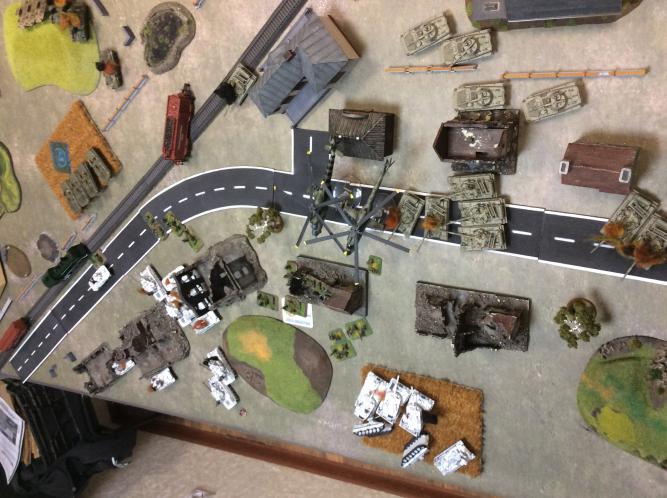 Now the outcome of battle was decide and thee only question was damage, Germans could further inflict. Surprise flank maneuver of Leopard 1s caught Spandrels from the back and in a quick salvo all were destroyed. German infantry also used panzerfausts to destroy 4 more BMPs and MILANs to fell one more Hind. In return they lost 3 out of 4 MILANs in short succession by artillery strikes and close AK fire. After loosing any hope to inflict any serious damage, Germans retreated.
*On turn 4 appeared BMP-2 platoon. The game lasted 5 turns, and ended, when I destroyed 1 MILAN with AK fire and 2 with artillery. We both agreed, that with 2 infantry platoons on the brink of morale tests (3 bases left in both), lack of heavy AT assets and Leo1 in diagonally opposed corner, he has no chance to win this game. It was nice game, though my opponent clearly needed some more luck with his FP tests.* 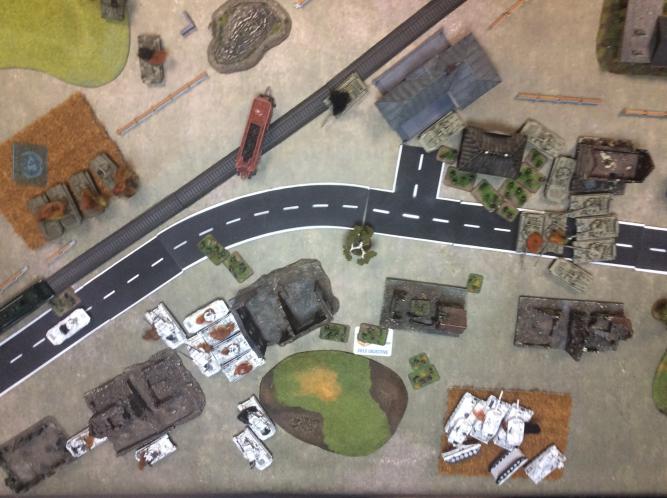