Local operations on A5 axis of advance

Local west German forces attempting to cut A5 and disrupt 57th Grd Motor Rifle line of advance.
I took no photos of my own, so I am reusing my opponent’s photos.

Its been a few days so I will use this space to reflect from on the action. For me the pivotal moments of the game came early, getting on to the objective with the Motor rifle dismounts was a major step towards establishing the tempo of the battle, neutralizing the enemy SPAA so early in the game was a coup for me, considering the investment I had made in the Mi-24 squadron. I learned just how effective the massed ATGM fire of BMPs at long range can be. which helped me appreciate what the BMP-2 can do as a weapon.

I made a mistake late in the game that cost me the T -64 company, perhaps unnecessarily, I should have remained with my rear to the canal and masked my flanks and rear from the M -60 platoon, rather than attempting to flank them, which lead the T-64s to being enveloped and nearly destroyed. I also wasted a turn of shooting with the Mi-24s by switching them from aiding the T -64s to supporting the Motor Rifle dismount’s assault on the town.
Praise be to the guiding hand of comrade Stalin that this happened late enough in the game that my opponent was not able to not capitalize on this. 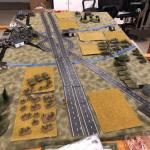 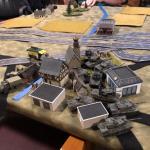 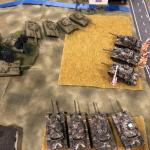 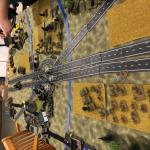 1 Person Has Recommended Enoch Root For a Commendation