I'm on the hunt after you, hungry like the wolf

Jeds brits are not done yet, so he is taking over control of the Soviets today

Same force as before, removed the ITVs and mortars however and subbed in some Pattons and humvees with tow launchers while Jed took control of 10 T-72s and BMP2 scout section.

Set up was done and Jeds role as the attacker was set, however I got lucky on the roll to determine the weather and got night fight.

The objective of the fight was for Jed to smash my command 113, and capture the Intel, my job was to prevent that from happening, no infantry in this fight as we opted to be fighting over a small nuked city. The large crater on the table jams radios and plays havoc with electronics, special rule was any unit within 6 inches of the large crater must make a morale check, if failed the opponent may place the tank within 6 inches of the zone in any direction to show the crew having gotten turned around.

Ended up with a good idea on how to approach the set up. I opted to use the crater as a shield of sorts, forcing the 72s to either drive into my guns, or risk getting turned around driving through the crater and possibly going every which way possible. Jed set up on the far right corner with his tanks formed up in a line. I had my 113 behind a building for cover and the humvees were used as a cavalry option, reacting as needed to the Soviets while my Pattons and Abrams were geared up as a rope-a-dope concept, Pattons go in first under cover of the Abrams, however I will need more of them to really manipulate the battle in my favor.

One idea I have been playing with is humvees as a very fast hammer. Head hunting artillery and AA assets, not much of a chance to do this concept, but I will play around with this and see how it works. Yeah they will die easy, but they are supposed to force the opponent to pull his soft skins back and hover over them with a security option that won't be usedin the main fight. 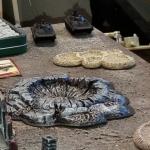 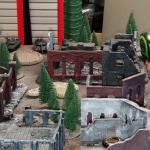 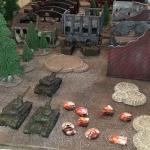 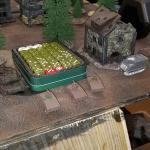 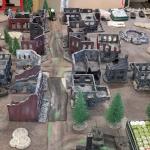 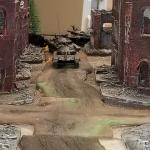 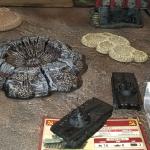 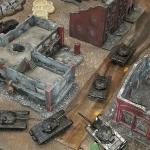 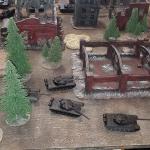 Soviets began their March, bmps pass within 6 inches of the crater but successfully passed the morale check. No shooting 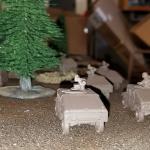 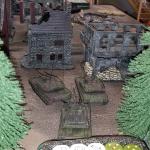 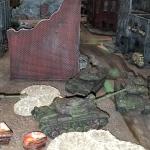 Pattons on the prowl while my Abrams set up a strong flanking position. My scout 113s stayed put waiting for a good chance to strike while my humvees got into position to counter the bmps. 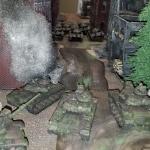 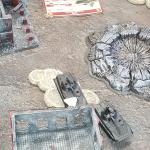 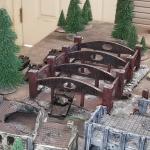 Wall of Soviet steel advances, Jed splits his horde so that they may try to catch my forces in a pincer attack. 5 shots from the 72s and only one dead Patton. Thank God for night fighting. However the marines don't have any of the optics that the three Abrams have and I suspect their shooting will be more of the same. One of the bmps gets bogged down in some craters outside of the radiation zone, however the lead bmp failed to hit the humvees. 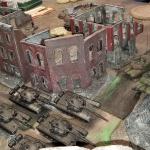 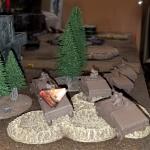 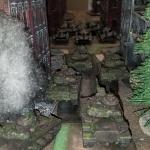 Pattons sprang out and attacked the 72s in the cross roads, while mynscout 113s lurked behind the buildings. In a bold move i opted to rush my abrams close (dumb idea i know, but it was too good to pass up) and my humvees opened up on the bmps. 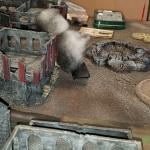 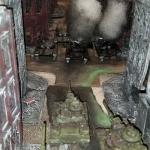 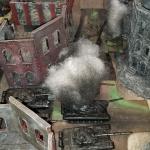 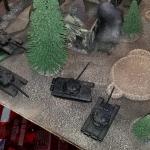 Ouch, lost an Abrams and an ITV while the Pattons survived counter fire to the crossroads 72s.

Pffft! Like 5 72s are going to make me run away 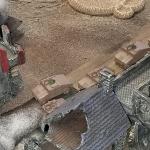 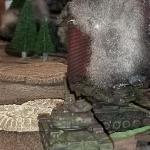 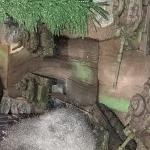 Returned fire and wiped out all but 1 of the crossroads 72s, the survivor bugging out shortly afterwards, the remaining Abrams and humvees screamed along the road while the Pattons frantically repositioned themselves for the oncoming 72 volley 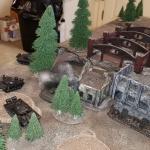 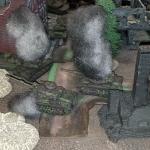 The marines stayed strong after losing two more of their numbers, the remaining squad of 72s missed the Abrams on the roads and we called it there due to family obligations. Was a load of fun, and I can't wait for the big game to see how 20 Pattons will do on the table