Carnage in the Ruhr

Playing from the Stripes club campaign kit, my opponent and I rolled up an Encounter mission where I would attack. Rolling on the conditions table I got a Dawn attack which would give me a few turns to get my defences set up correctly, and hopefully kill a few enemy units without much retaliation. My opponent placed his objectives at either end of my deployment area, while I placed mine on the far right and centre left of his deployment zone. My deployment consisted of a mech platoon on each objective, M109s behind a hill on my left, my IPM1 Abrams centre left, and my FIST in the centre. My opponent deployed a horde of tanks, BMP-2s and infantry on my left, and some ATGW and infantry in the middle. 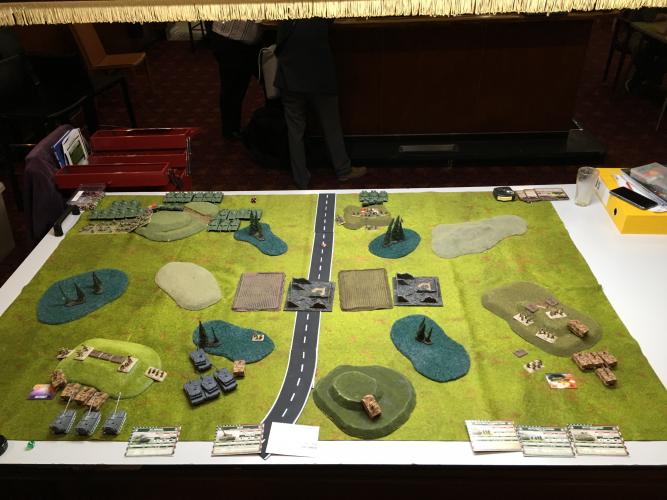 Once again, the WWII Italians and invisible Dragon teams form a brave line of defence.

Before the Sun has Risen

The first few turns didn't see much shooting as it was still night and no one wanted to give away their positions. During this time, my opponent dug in his central infantry, and moved everything on my left flank forward under the cover of darkness. My infantry kept failing to dig in and my Abrams tried to find cover from the enemy ATGWs while trying to get a good firing lane down the left side. Seeing the enemy BMPs attempting to exploit a passage on the far left side of the table, I decided to drop artillery minelets to block their advance. Though only one BMP-2 was caught in the mine field, this forced my opponent to abandon that approach and bring everything over a hill on the centre of the left side of the table. 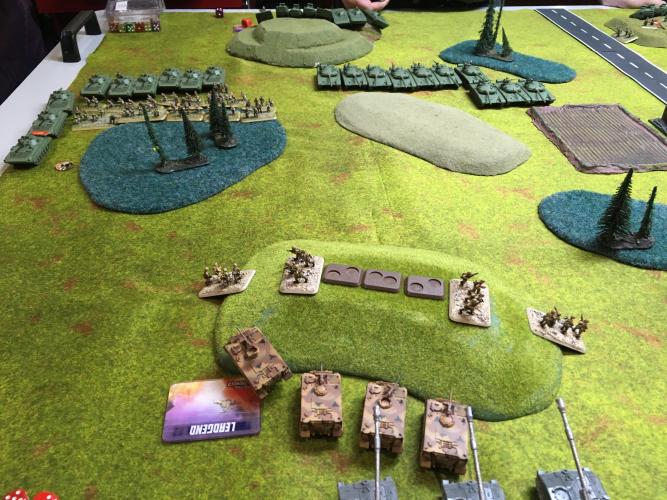 A minefield dropped by my artillery prevents an enemy charge down my left flank.

At the start of my turn 3 daylight was in effect and both my opponent and myself began to fight in earnest. My unprotected infantry took heavy casualties and lost 3 teams, while the BMP trapped in the minefield was able to snipe one of my M109s. In return my Abrams destroyed 3 T-72s which resulted in a 4th one fleeing. My M113s charged forward and pinned down the enemy infantry with .50 cal fire. Finally, my mech platoon finally managed to dig themselves in. 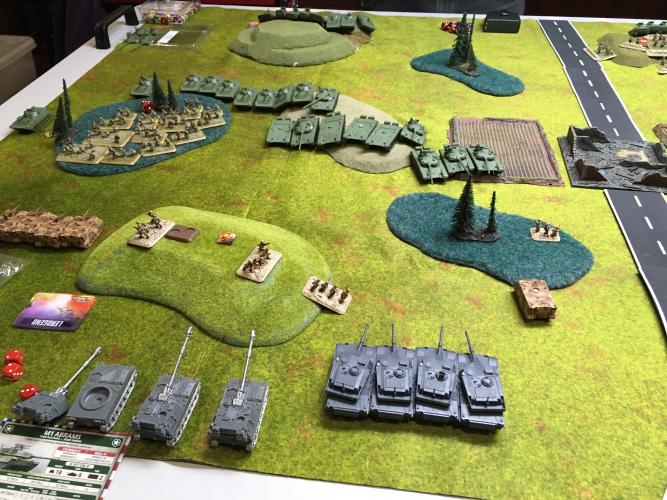 The Italians ... err, I mean American infantry take casualties while some T-72s are destroyed.

The Battle Heats Up

Now the battle really got going. Over the next couple of turns the Abrams danced left and right, trying to avoid the bulk of the BMP ATGW fire while trying to prevent the enemy T-72s from flanking them down the middle of the table. Two Copperhead LGPs came down perfectly onto 2 T-72s with maximum effect while fire from the M113s caused casualties among the enemy infantry. Although the front armour of the IPM1s held strong, all but one of the M113s was destroyed by BMP autocannon, and infantry HEAT rounds. Two T-72s managed to rush the American defensive position which result in the destruction of another M109 and the routing of that platoon. Meanwhile the right flank remained quiet as neither side was prepared to attack. 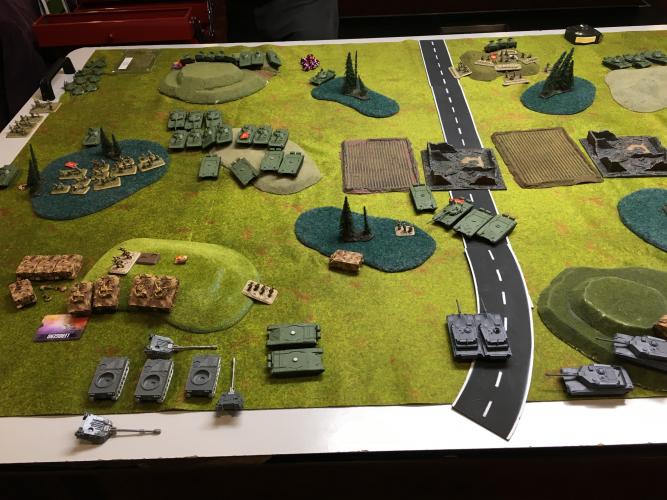 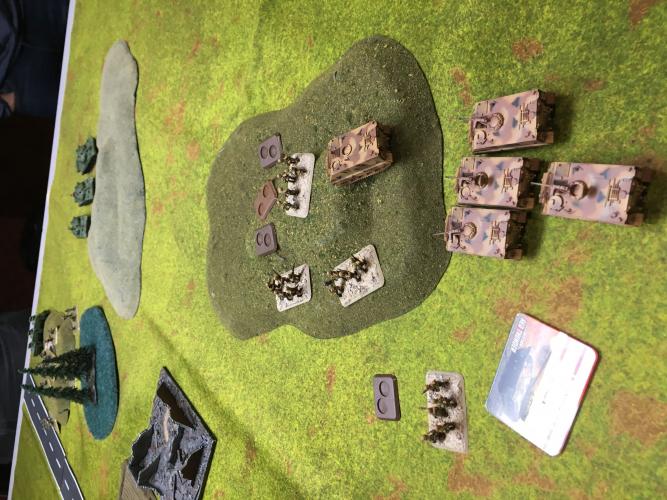 The right flank remains quiet... and sideways. WHAT IS IT WITH THESE SIDEWAYS iPHONE PHOTOS?!

I finally received a unit from reserves and decided to put my VADS on. These would be great at holding back the enemy infantry. Unfortunately, for some reason, I believed that they would be able to destroy BMP-2s ... from long range. Of course, that resulted in no BMPs being destroyed and the VADS being wiped out, despite their concealed positions. I took solace that on my right flank, my opponents T-55 reserve platoon, along with the existing T-55 platoon were both wiped out from combined IPM1 and Dragon ATGW fire. 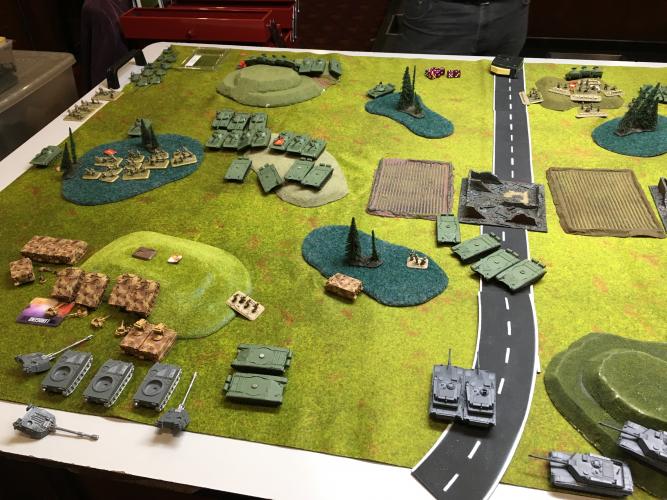 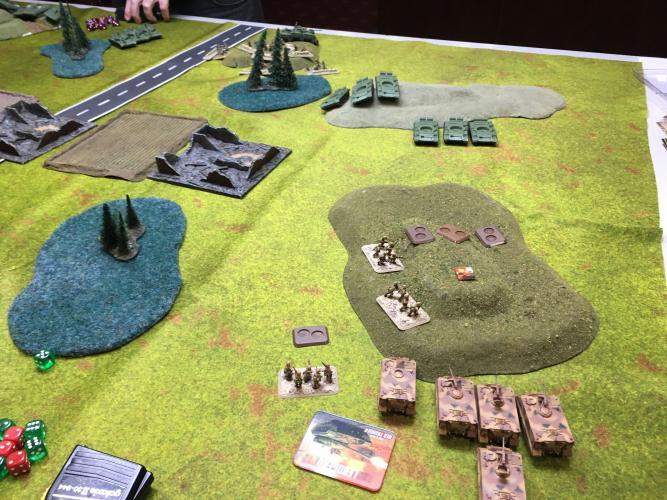 Oh boy! Those Invisi-Dragons are actually good for something.

After several turns of being pinned, the enemy infantry finally started moving forward. Fortunately for me, my reserves also started dribbling in so I had something to defend the left objective once my infantry had been wiped out. Although I finally lost an Abrams to ATGW fire, I was able to whittle down the enemy infantry and wipe out the BMP-2s. There was still of lot of East Germans on my left flank, but the situation was actually improving as there was less units that could hurt my Abrams. Since there was no longer much happening on my right flank I decided to move my M113s up to threaten the centre objective. Of course, this was before I considered the arrival of enemy reserves. As a result, I lost one M113 and had 2 others bailed. My right flank was now looking very shaky. 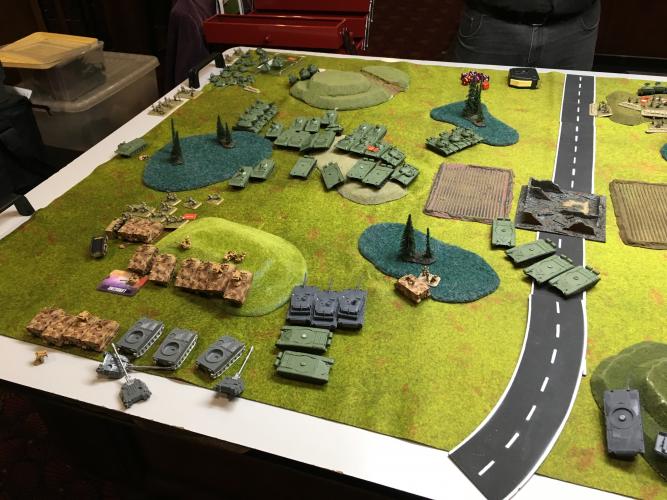 M901s and scout platoons get involved on the left flank. 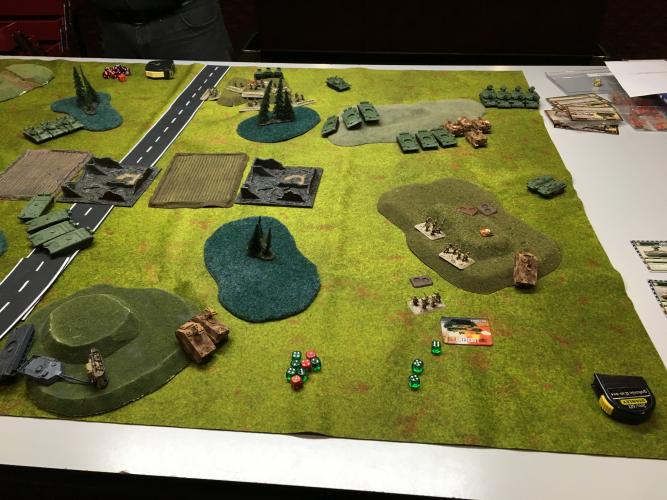 TALLY-HO! The M113s on the right flank over-commit themselves.

The End is Inevitable

My Abrams continued to dance around on the left flank. After a lot of fighting between the enemy infantry and my scout platoons, the Abrams were the only unit left to cover the objective in that area. They finally ran down the East German infantry and managed an excellent final salvo, killing the remaining two T-72s and two SZUs. Unfortunately, their efforts were in vain as my infantry on the right were slowly being chewed up by armoured cars, ZSUs, and some T-55s. 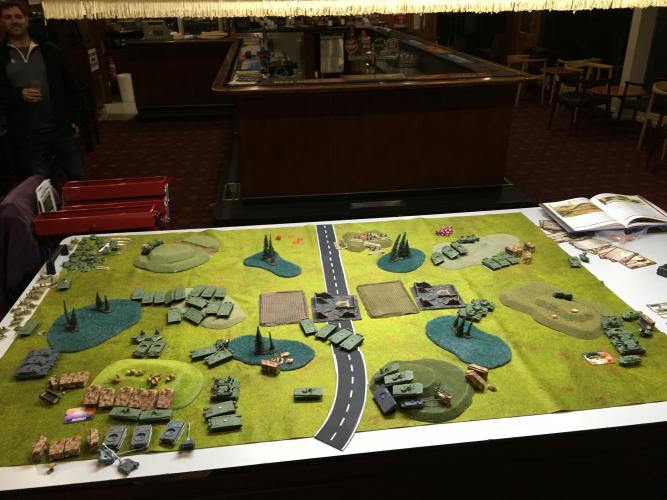 The Abrams are still fighting fit among the carnage of the left flank, but the Italians ... errr, I mean American infantry on the right are ground down to nothing.

After at least 12 turns (we lost count somewhere around turn 8) and almost 3.5 hours of playing, I was unable to hold back the East German tide, but it certainly was an enjoyable game with utter carnage raging on both sides.

The IPM1 tanks were clearly the best unit of the game for me, dodging and bouncing enemy fire while only taking one loss and a couple of bail outs. Though I feel like I really need two platoons of them to cover 2 objectives. Perhaps two platoons of 3 tanks, or possibly a platoon of IPM1s and another of M60s would work?

It was nice to see the Dragon teams actually have an impact on the game, rather than just sit there impudently as they normally do. I guess that has a bit to do with playing against the East Germans and their inferior tanks.

I'm still not convinced that the M109s are worth their points, but I must admit that the minelets were VERY important in securing my left flank, and seeing the Copperheads strike home was exhilarating! Of course, if I had tightened up their positioning I could've avoided the first loss which would have kept them in the game longer with possibly a more positive effect.

Finally, I really need to learn to keep my VADS back. I'm a repeat offender when it comes to charging them forward and getting them shot up for no effect. I was also a bit reckless with both M113 platoons. Keeping any of these platoons alive would've prevented the enemy infantry from attacking at all and given me more time to whittle down the enemy on my left, and possibly make some headway of the enemy reserves on my right.

In the end its was a hard fought, but enjoyable game. Congrats to Leadgend on his win.