Chaos, that was the only way to describe the war at this point. With NATO and Soviet offensives and counter-offensives clashing all along the front, the lines were fluid, reinforcements needed everywhere, and his unit, what was left of the 61st Guards Sverdlovsk-L'vov Tank Regiment, 10th Guards Tank Division, were being constantly thrown into the fire wherever Stavka needed support. Podpolkovnik Vorishnov looked up from his map, this time it was near Frankfurt. The Americans were making a push to reinforce one of their offensives and 10th Guards had been shifted to meet it. For once, it looked like the battle was going to be a free-for-all, with neither side having time to dig in or prepare. Just find the enemy and destroy them. Vorishnov liked this kind of simple mission. 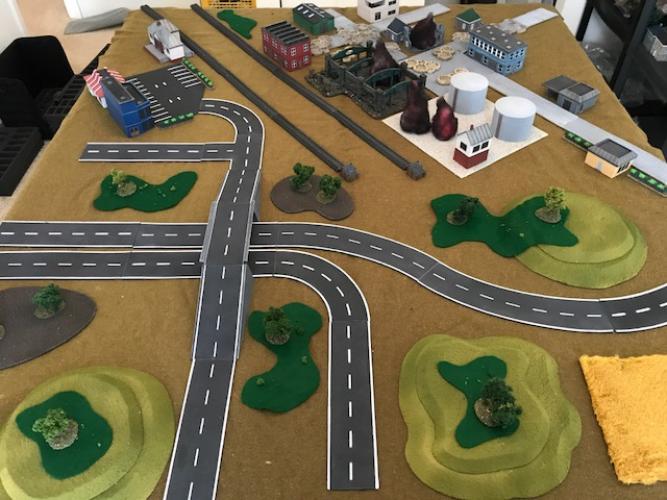 Vorishnov deployed his AT-8 equipped T-64BVs along the autobahn, hoping to press forward rapidly past the nearby industrial area, while Major Segetov, recently arrived from the Berlin fighting, would push into that very area and seek to secure the rail head. The Americans, it seemed, anticipated this, and countered with a unit of M1s in the industrial area and another of the newer 'Improved' M1s along the highway. 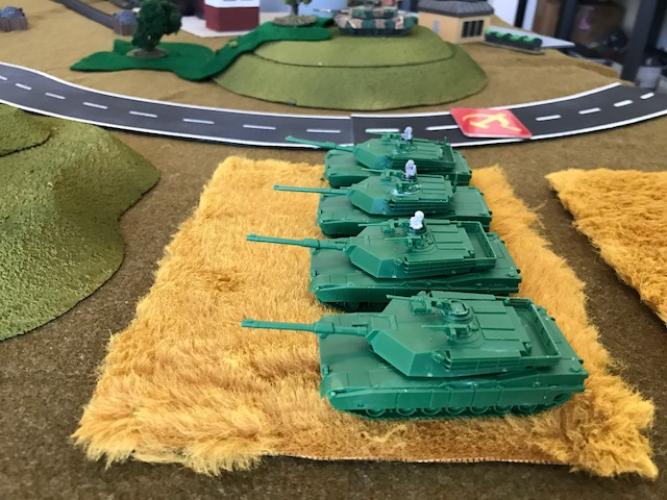 American IPM1s along the autobahn. 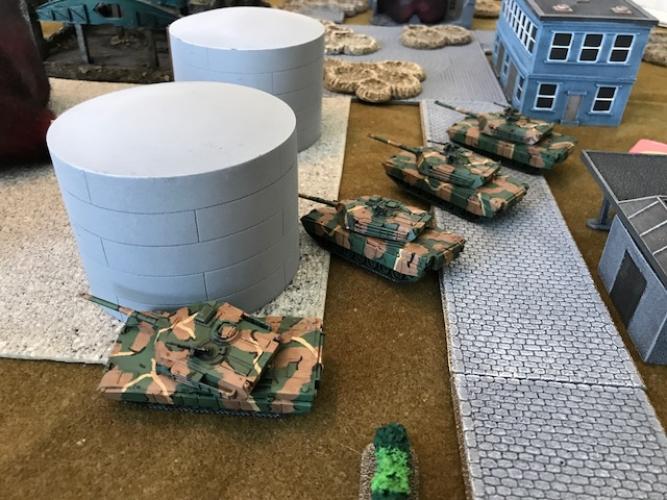 M1s in the factories. 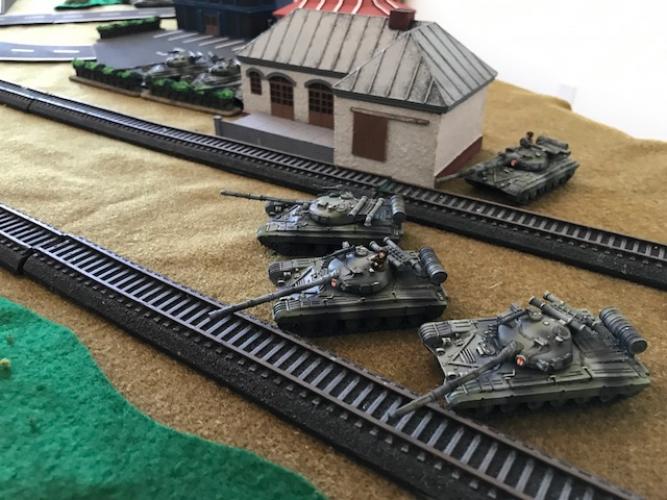 Major Sergetov takes the lead to secure the Soviet left. 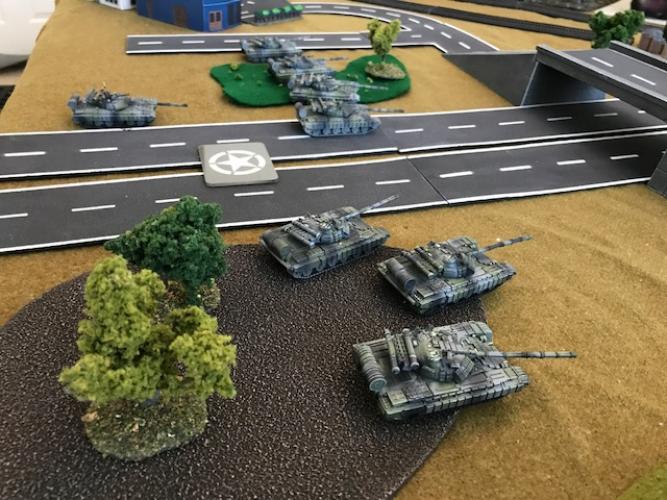 The Americans had the tactical initiative, moving to seize the heights along the autobahn and moving to firing position in the industrial sector. The occasional tank fired on the few Soviet tanks they could see while they advanced, but the long range made it difficult to penetrate the Soviet armor. 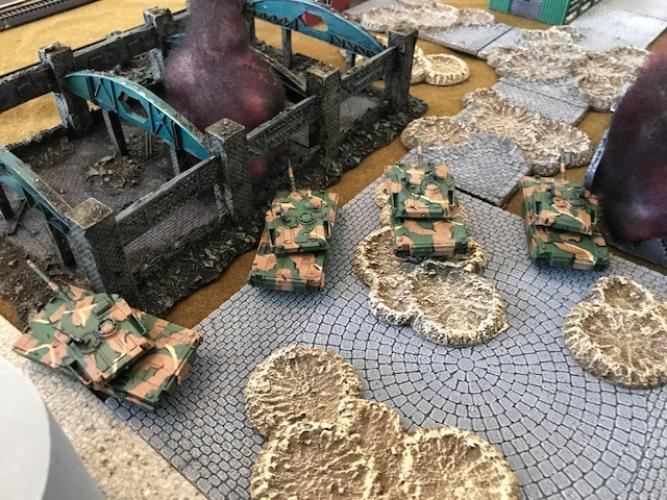 M1s move forward to secure the bombed out factory. 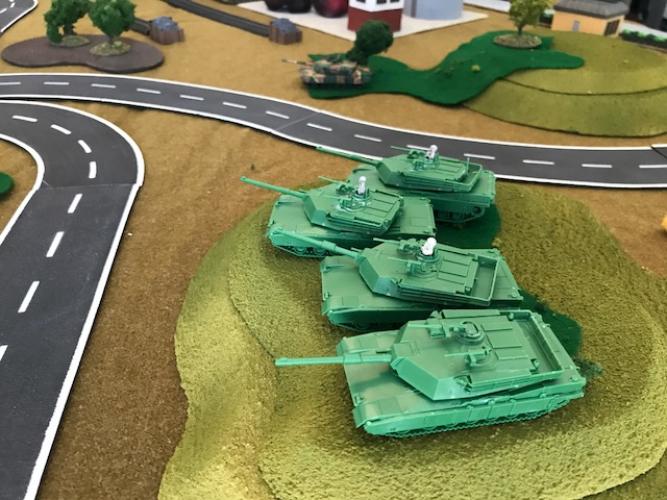 And the IPM1s secure the heights. 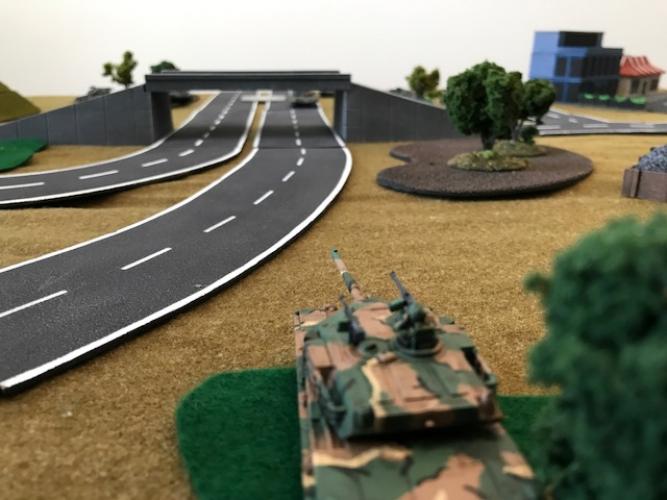 The American commander attempts a ranging shot on the Soviets, without success.

Rather than let the American dictate the flow of this battle, Vorishnov ordered his forces forward! Advancing across the battlefield, his tanks moved into positions and took under fire any exposed American tank, with the combined fire killing two of the tanks in the industrial area. The only setback was a lone T-64 who bogged in a wooded area along the train tracks. 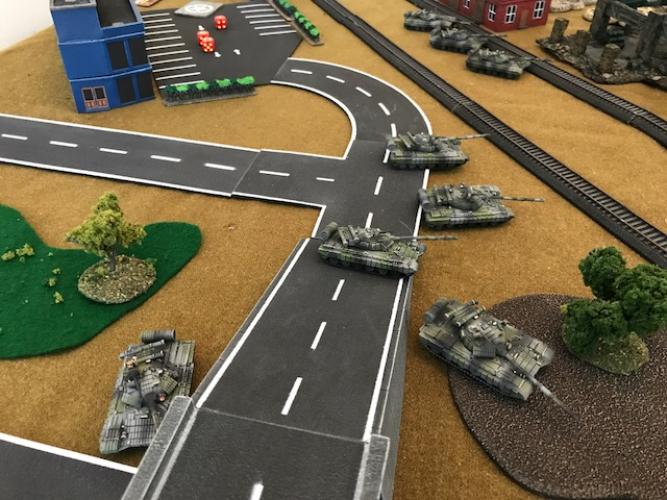 A general Soviet advance is declared! 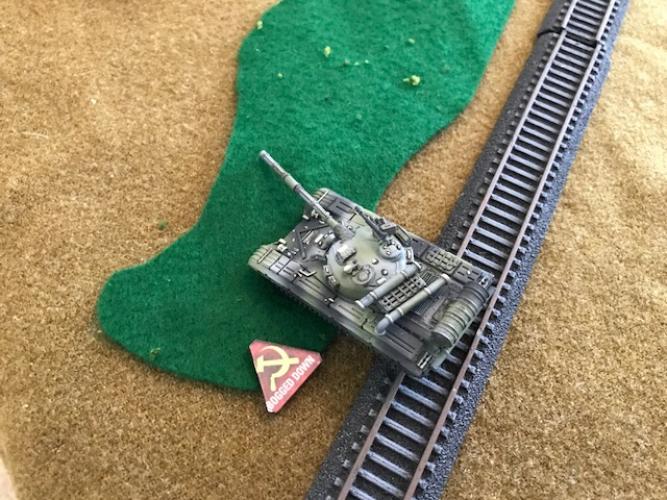 "It is no big deal Comrades! We shall join you shortly!" 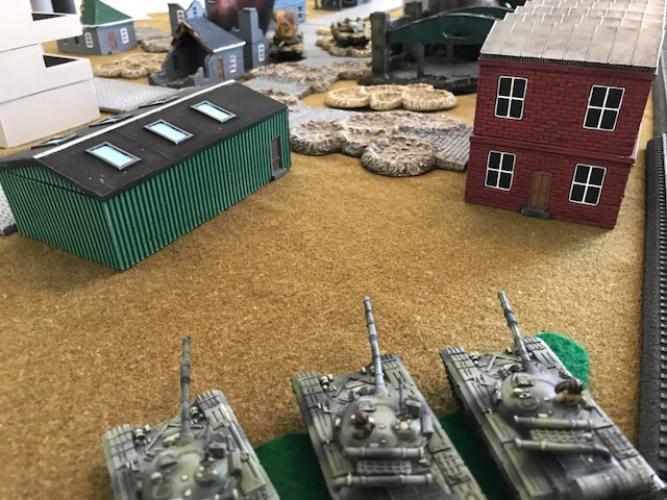 Despite the losses, the American commander remained confident. He had a plan, a bit of an all or nothing gamble, but given the tactical situation he faced, he was confident it would work. Pushing his un-engaged IPM1 led platoon forward, they destroyed a pair of T-64BVs covering the Soviet far right. Meanwhile, the surviving M1s in the industrial area began a cat-and-mouse game with their opponents, hoping to draw them in where they could be flanked. 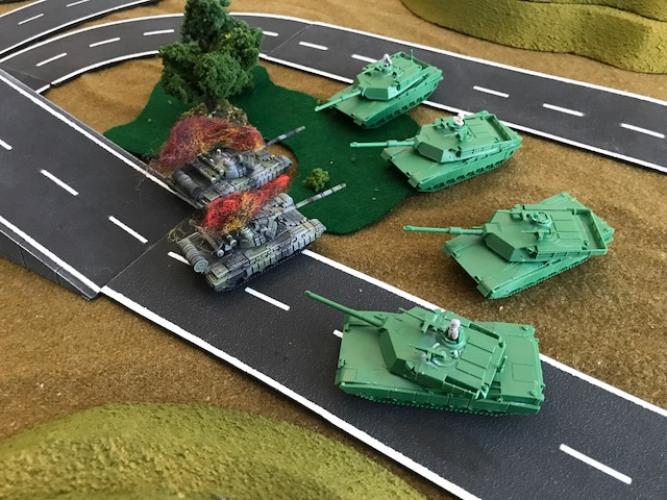 The Americans can do weight of fire as well it seems. 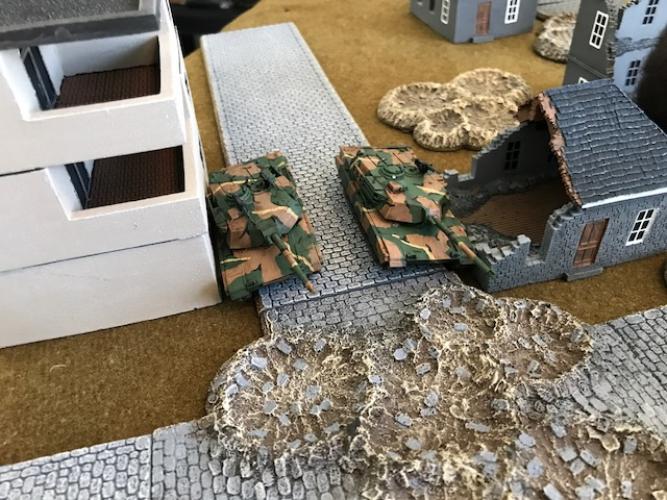 "Let the game of hide and seek begin!"

Sensing that the American's were up to something, but still unwilling to let them force his hand, Vorishnov swung his remaining T-64BVs west in an effort to threaten flank the American heavy tanks that were poised to breakthrough along the autobahn. In the industrial area, Major Sergetov closed with the remaining American tanks, destroying one in a torrent of main cannon fire. The lone T-64 remained bogged, more stuck than its commander had initial thought. 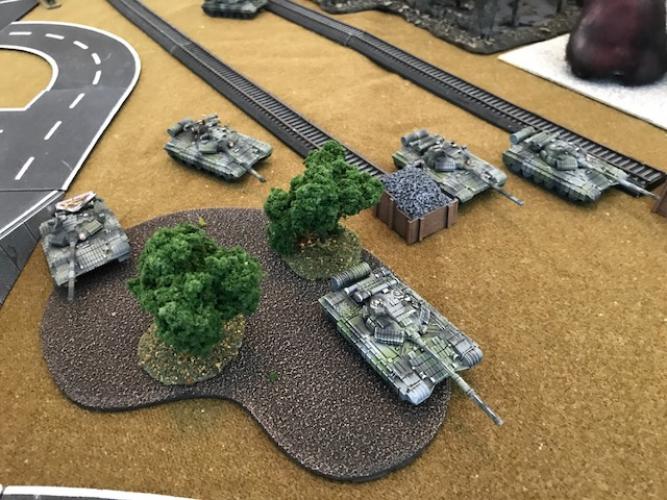 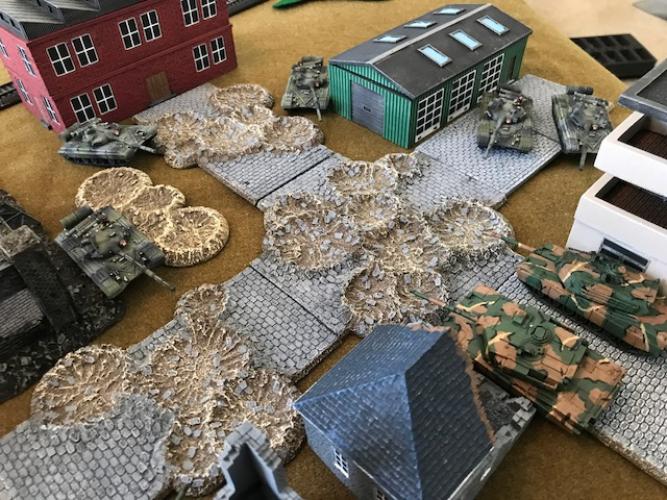 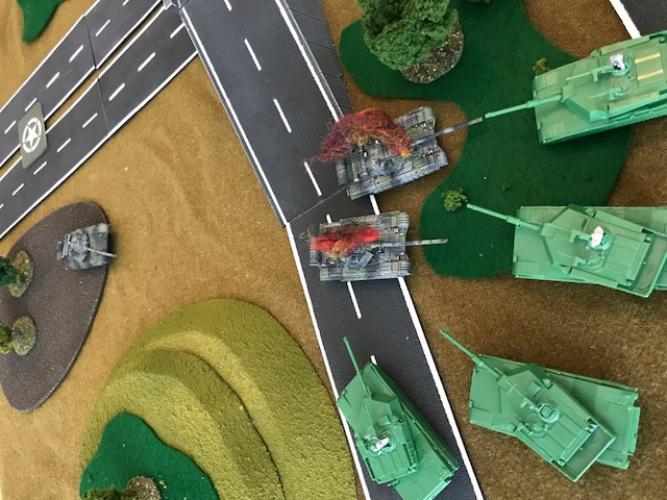 "Perhaps today IS a good day to die for the Rodina!"

With the battle fully joined, the Americans rushed through the gap in the Soviet lines, wiping out the last T-64BV on the right flank and the only thing between them and securing the autobahn. In the industrial area, the game of hide and seek continued, with the lone M1 claiming another T-64 and forcing the lone platoon survivor to flee. In the center, the American commander engaged the approaching Soviet tanks at close range. Despite beautiful, near training-scenario shot pictures, his gunner failed to hit a single tank. 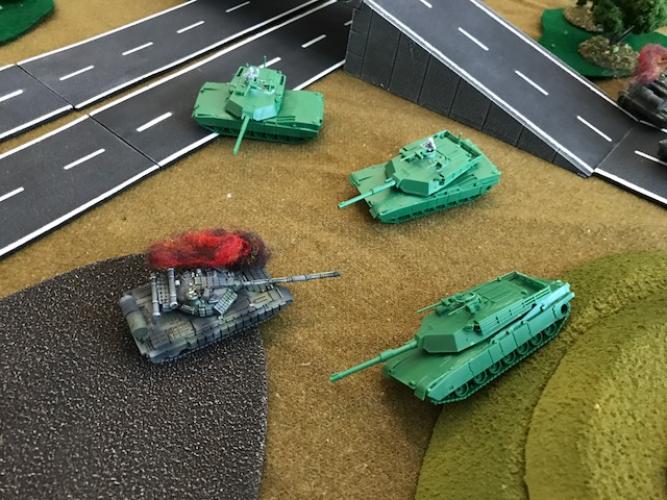 The American's bull rush the last tank between them and victory! 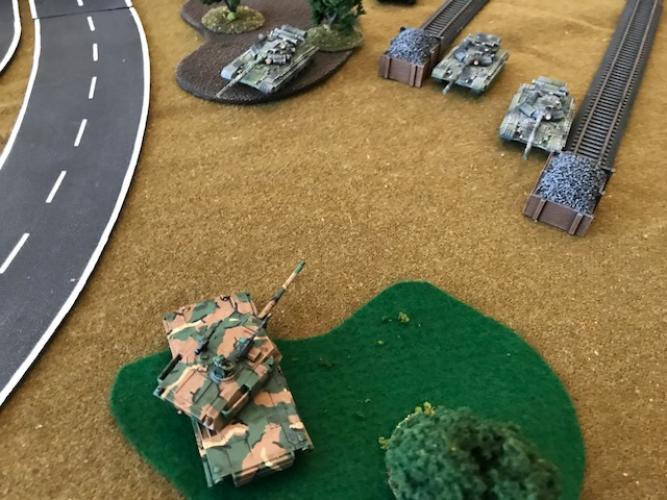 And the American commander tries to halt the Soviet advance, but there seems to be something wrong with his bloody tank today!

Finally realizing the American plan and the threat it posed to his own, Vorishnov concocted a bold plan of his own. With Sergetov bogged down in a fight in the industrial area and his own supporting tank required to sweep back down the autobahn to deal with the American breakthrough attempt, he alone would advance on the American rear!

Knowing that if his supporting tanks failed, he was a dead man, Vorishnov heedlessly charged forward, all the while thinking that it takes a brave man not to be a hero in the Red Army. Luckily for Vorishnov, his tankers were well trained and managed to kill the American commander's tank with a flank shot. 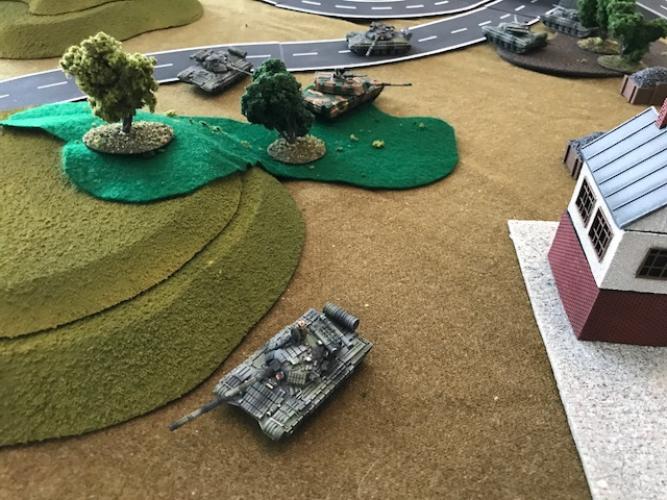 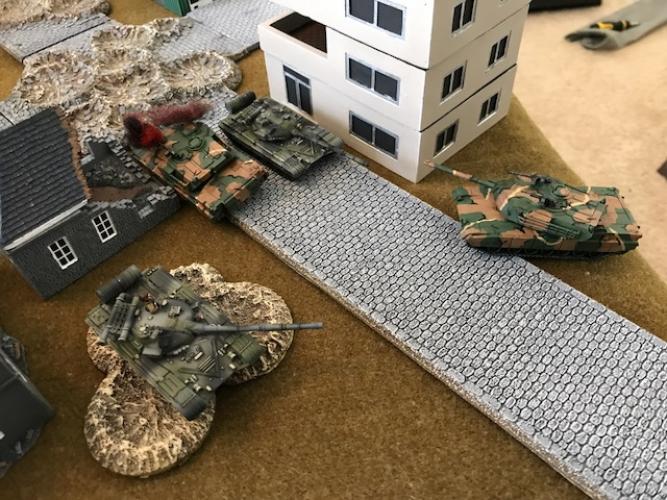 While the game continues in the industrial area.

Despite the heavy casualties and the lone Soviet tank running for the autobahn, the American LT in charge of the IPM1 heavy platoon was confident it was a valiant, but doomed effort. His tanks now controlled the northern autobahn exit and his counterpart in the industrial sector was still alive, slowly causing attrition on the Soviet tankers as he retrograded back towards better firing positions. With clear sights, his tanks fired along the highway, hitting a pair of Soviet tanks in the rear armor, brewing one up. 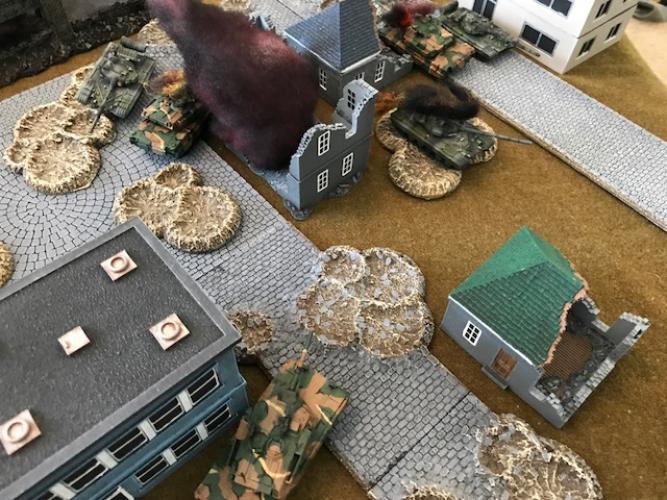 The M1 that refused to die! 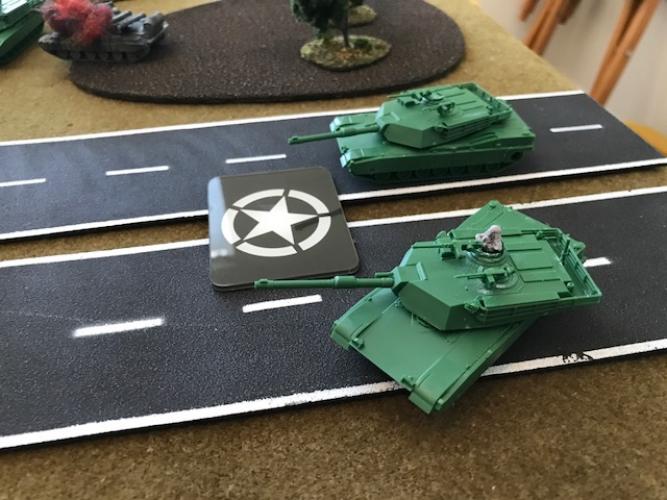 The Americans control the autobahn! 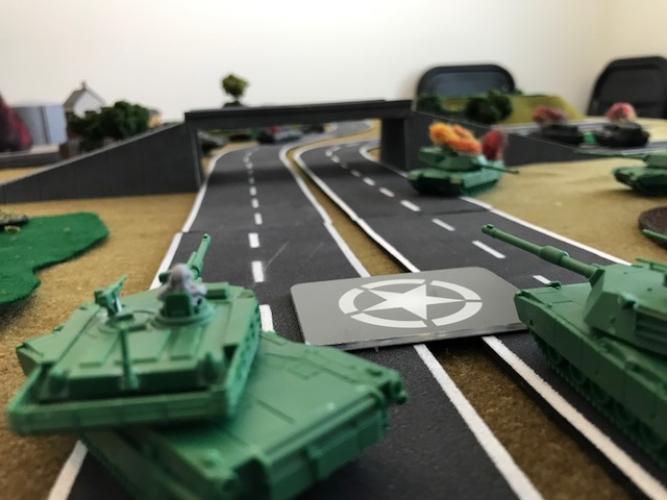 Knowing it likely meant death, Vorishnov ordered his tankers to engage the Americans at point blank range and ensure they could not secure the northern autobahn route. Positioning himself on the southern autobahn route and securing it, Vorishnov lined up a shot and sent an AT-8 missile at the American tankers. While it hit, their stout armor shrugged off the missile. His other tankers had more luck, killing one of the heavy tanks. But vitally, they had closed within range to ensure that the American did not claim the autobahn uncontested. 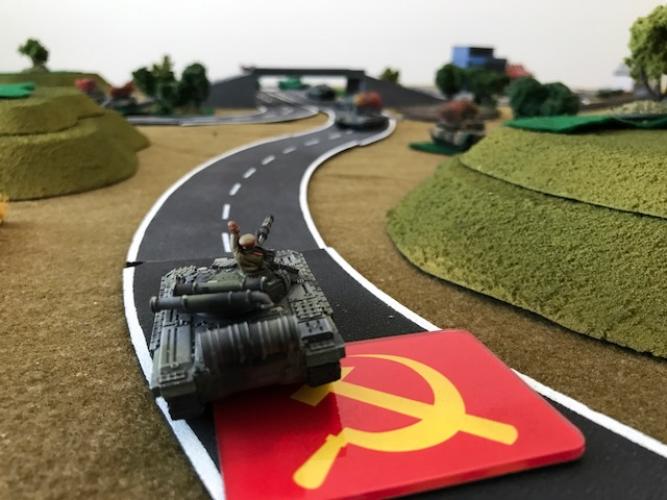 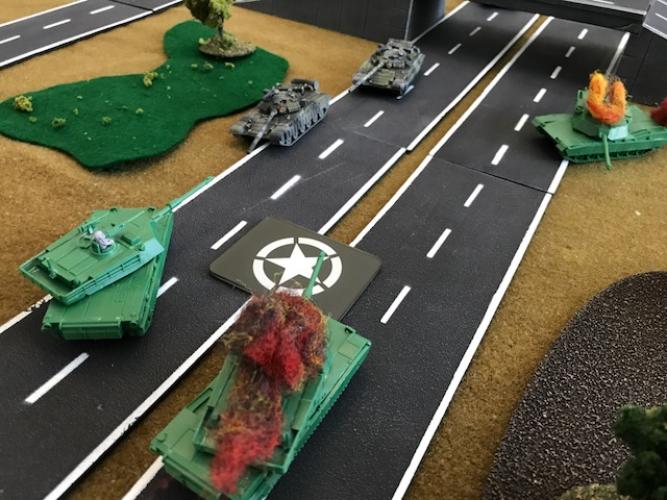 Close range fighting on the autobahn.

The American LT was dumbfounded. Not only were Soviets able to close the range to contest his control of the autobahn, but the Soviet tankers had AT missiles! He had only one hope and that was to blast the crap out of the tanks in front of him and pray his buddy in the industrial area could remount to rejoin the fight to kill that crazy Soviet tank on the autobahn. While the shooting of his unit claimed a T-64, it was not enough to kill them all and thus the remained a threat to his control of the objective. To make matters worse, his friend in the industrial area remained bailed, meaning that the Soviets had uncontested control of the southern autobahn exit. 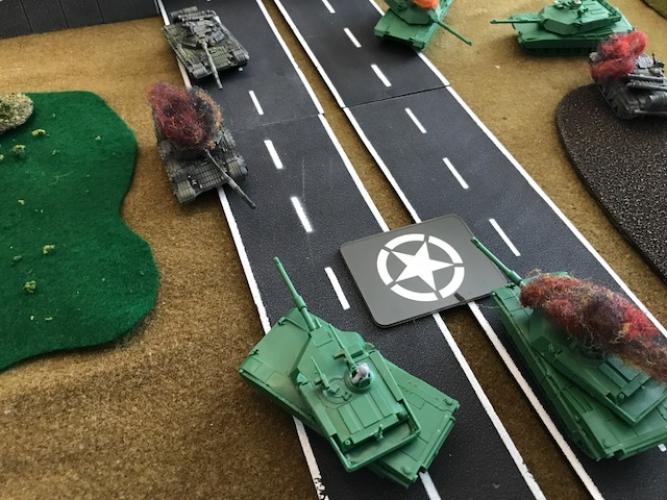 Not enough dead Soviets to remove the threat! 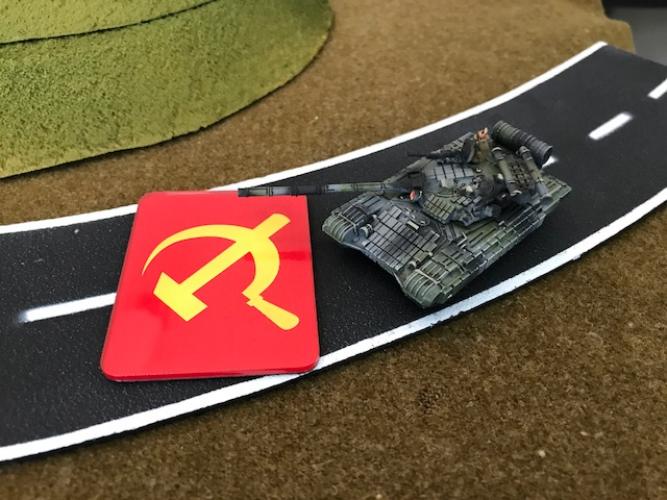 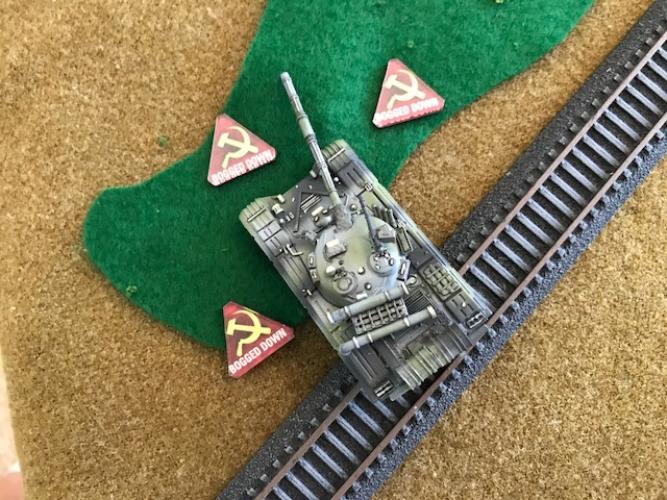 Meanwhile, in a far corner of the battlefield..."Comrades, a little help....I seem to have fallen and cannot get back up. Comrades?" This tank stayed bogged the entire game, so many ones on cross check!

NON-NARRATIVE: My friend wanted a quick all tank game where he could test out the M1s and IPM1s after running M60s for awhile. So, that's what we did! And what a game it was! Bold charges by both sides, lucky (and un-lucky) shots, and a lone T-64 who bogged in the first turn and every turn there after. What a game!