Across the Leine at Alfeld

Podpolkovnik Vorishnov looked across the river and pondered his latest mission. Promoted only days ago for his many successes in the opening days of the war, he was now blessed both with greater responsibilities and harder missions. This latest one, directly from Colonel General Alekseyev, was going to be a challenge. He had been ordered by the General, in person, to get his tanks of the 10th Guards and those of the recently arrived second echelon across the Leine River at the town of Alfeld. The town was now the focal point of the action in the area after a successful tactical breakthrough that morning, and Alekseyev was determined to make sure that tactical victory became an operational one, and hopefully a strategic one. 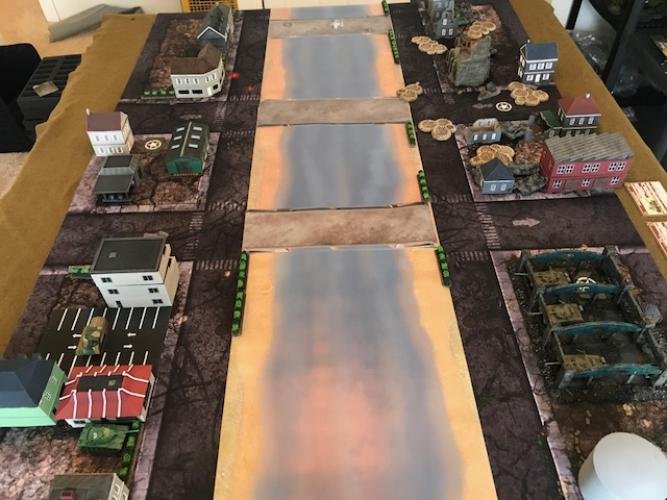 The Leine River as it runs through Alfeld. 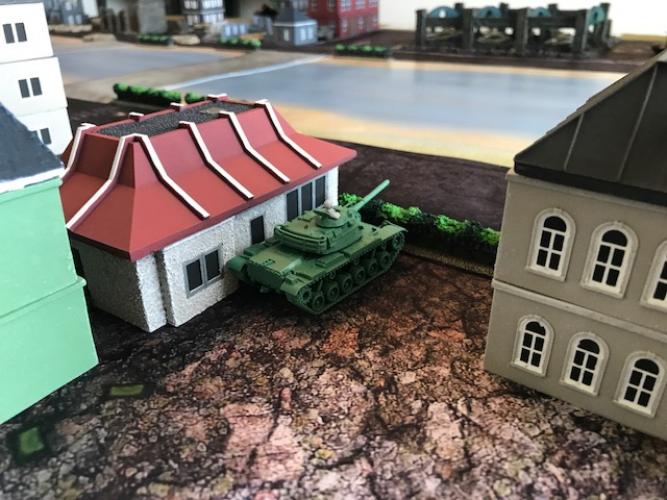 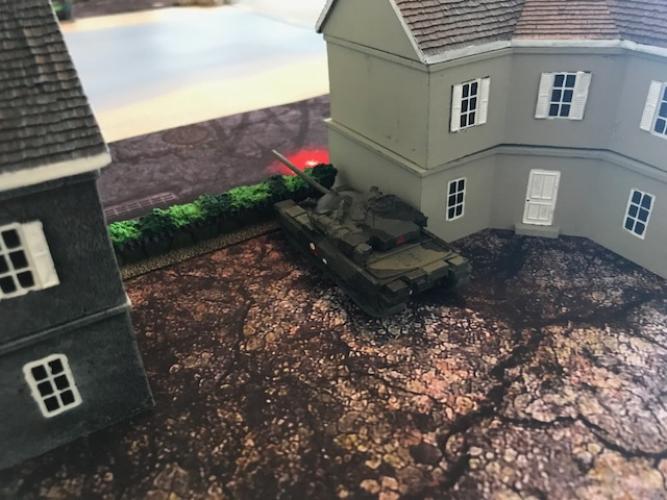 The Americans and British watch the river, waiting.

Intel had informed Vorishnov that British and American armored forces were in the area, hidden within the city, waiting. Happy that this looked to be a straight armor fight for one, but dismayed that his forces would have to attempt to cross the river against unknown opposition, Vorishnov made his plans. Placing his T-64s into overwatch positions along the river front, Vorishnov ordered the T-72s of the supporting divisions forward, blitzing across the bridge. Vorishnov hoped his bold charge would spook the NATO commander into revealing his hand. As Vorishnov watched several British Chieftains move from their hidden positions, he smiled. 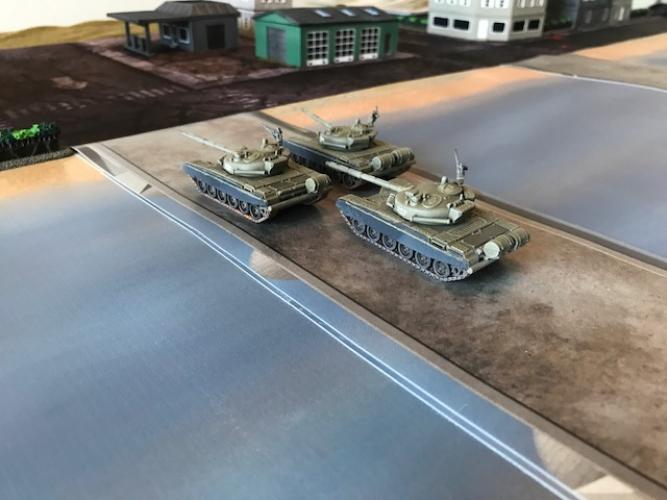 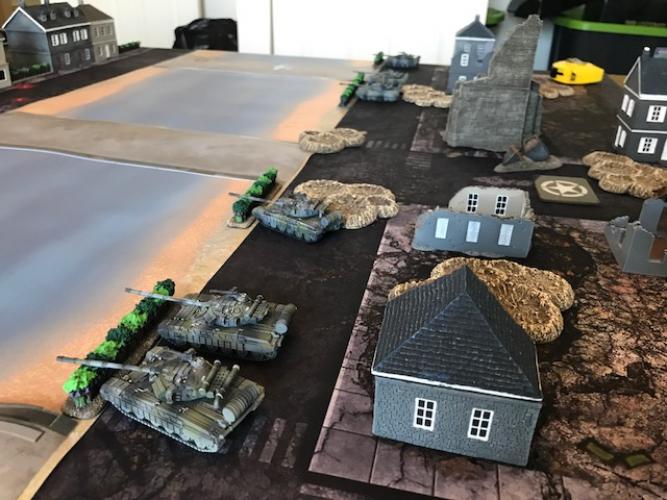 While T-64s taking covering positions for the advance. 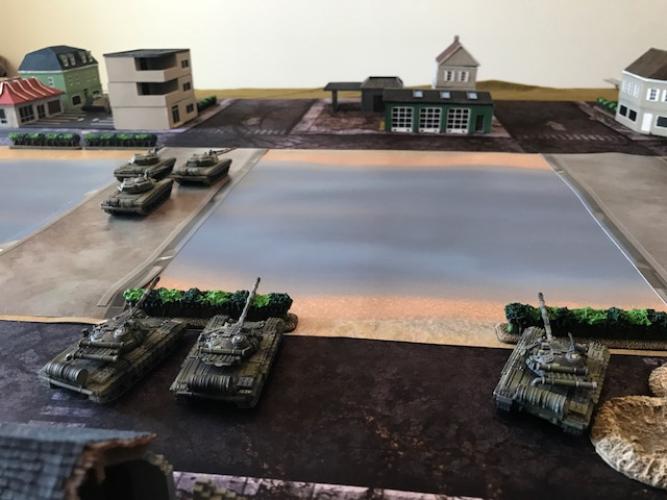 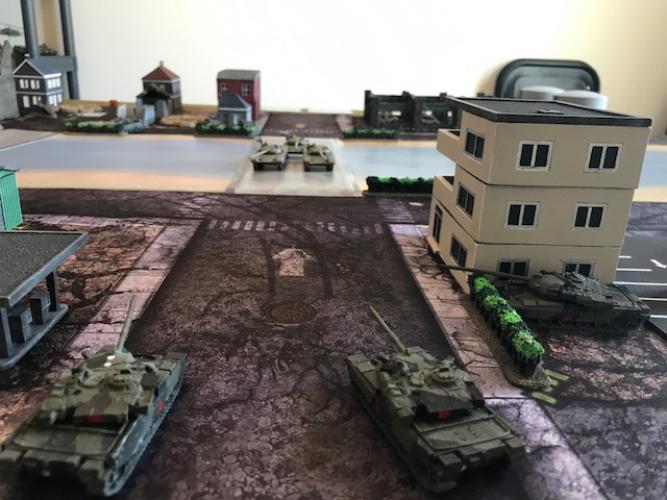 The British hand is forced.

The British tanks open fire at the advancing T-72s, claiming one in a ball of fire. Confident he has forced his opponents hand and desiring to strike while his retains the initiative, Vorishnov orders his own reserves forward towards the second bridge. Simultaneously, the T-64s in overwatch open fire at the Chieftains they can see, opening a long range duel across the river as the first unit of T-72s makes it to the western side. 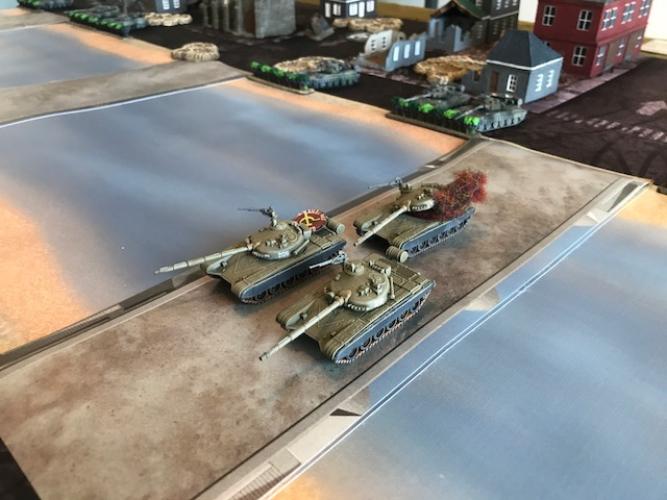 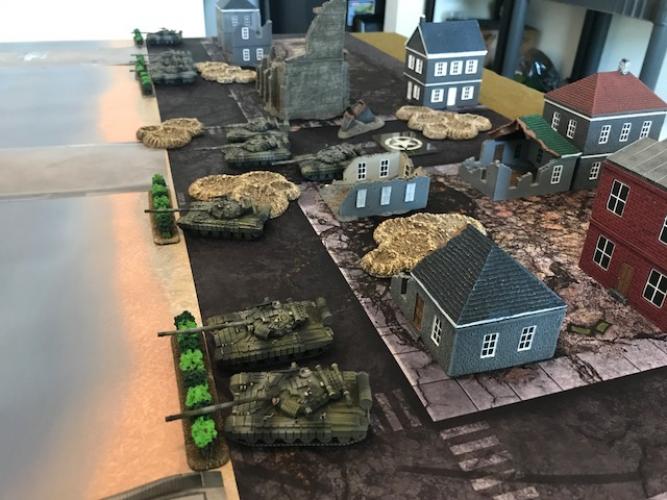 10th Guards advances on the Leine. 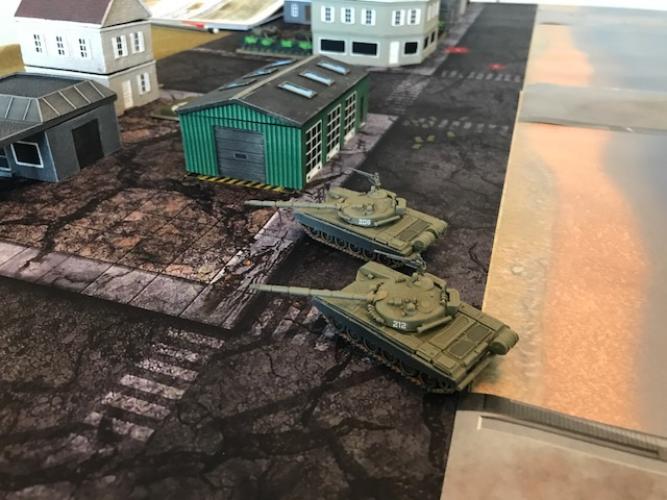 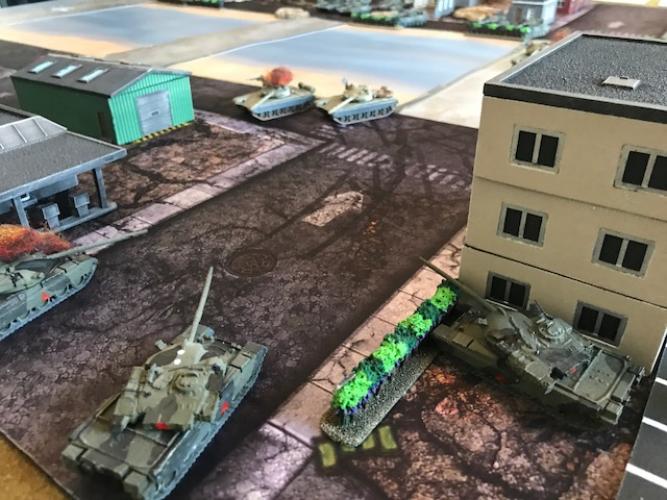 The tank duel across the river continues, with both British and Soviet tankers claiming the occasional kill. The initial T-72 advance meets heavy resistance from the British tanks, while Vorishnov's T-64s move to support across the the other bridge and into position on the west bank. But the NATO commander has one more trick up his sleeve, as American M60 tanks arrive from reserve to hit his tanks. The battle is not over yet. 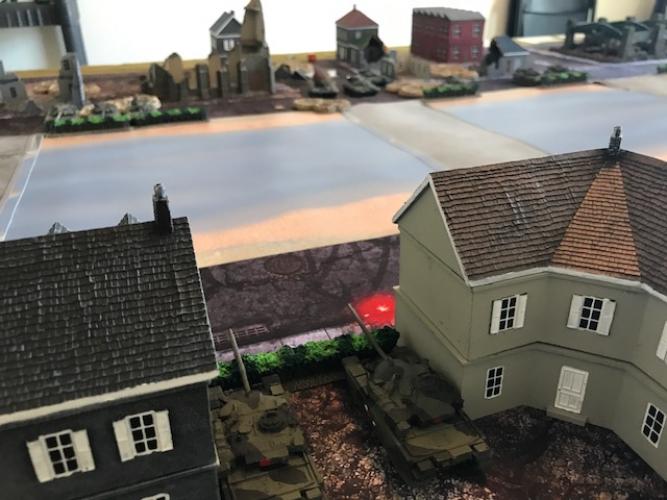 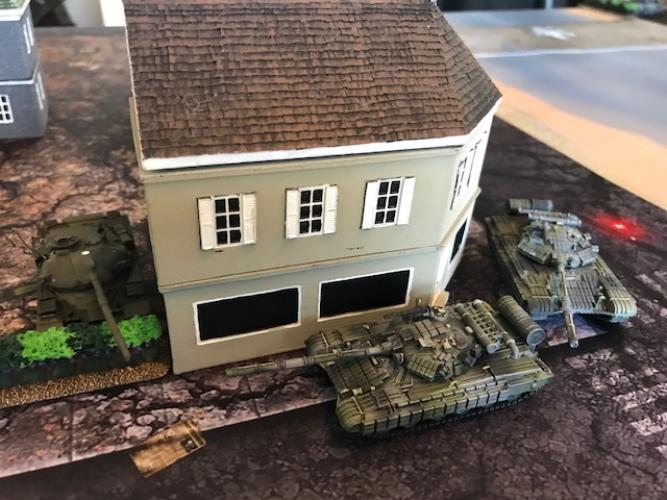 "Comrade, I am telling you that there IS an enemy tank right over there! Can you not see the barrel?!" 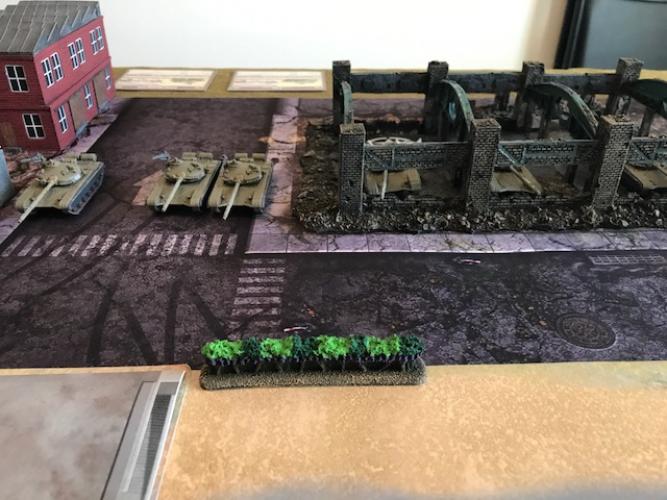 The second echelon moves into the fight. 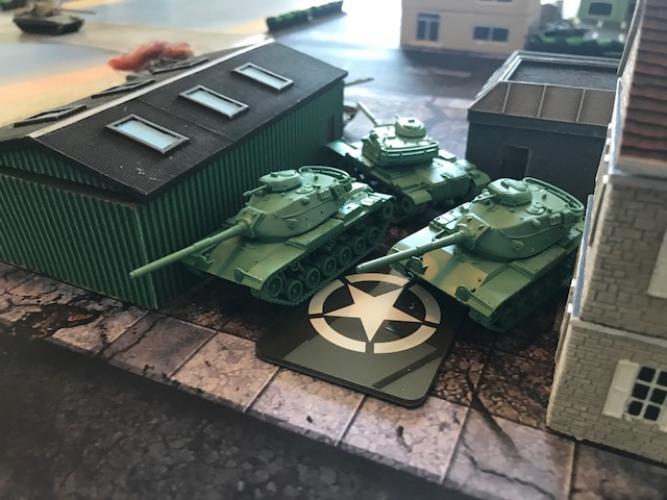 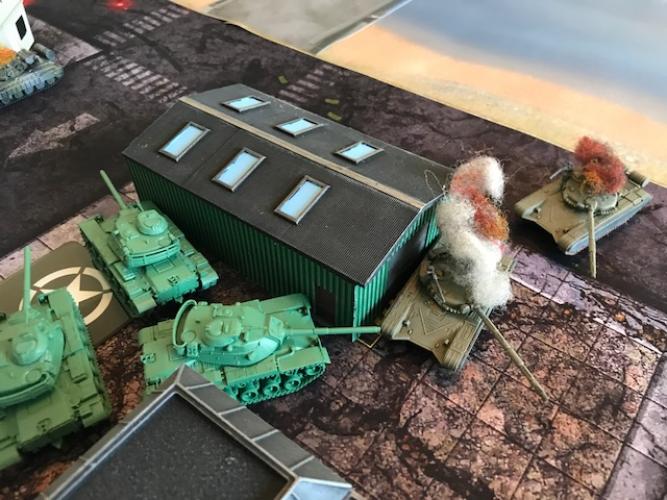 And make an immediate impact.

Slamming his fist on the turret, Vorishnov curses. Two units of tanks, gone in an instant. But all is not lost. Surprisingly, the long range cross-river duel has been going well for his tankers, with several British tanks burning. Sensing an opportunity, Vorishnov orders nearly every tank unit forward across the river, leaving only a single T-72 unit to pin down the American command tank. 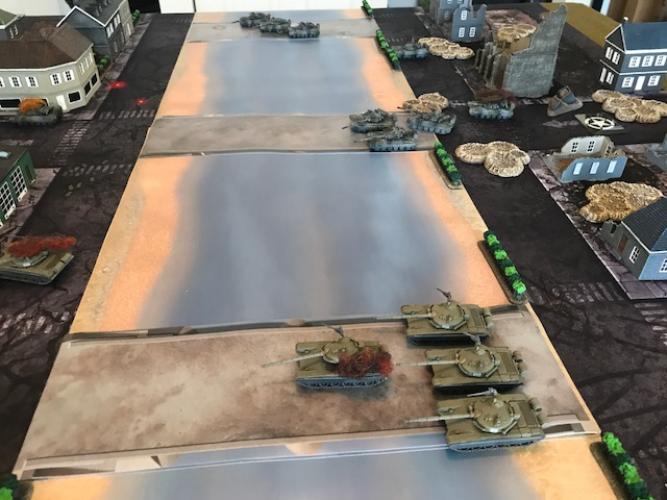 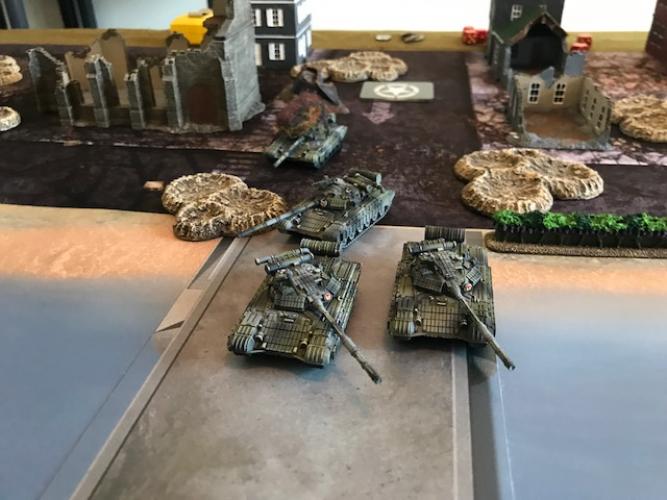 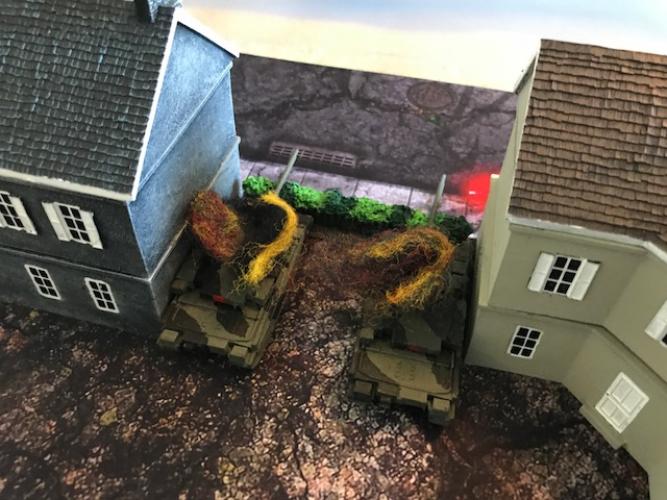 With Soviet tanks advancing across all three bridges in the sector, Vorishnov can sense the NATO commanders hesitation. Both sides have suffered casualties, but the NATO commander has lost more of his superior Chieftains and must now rely on American M60s, against the full weight of several T-64 and T-72 units. An uneven fight, but one the NATO commander is still confident he can win, especially when his final unit of tanks arrives in time to blunt cold one of Vorishnov's attacks. Combined with a bold sortie in the center to counter another attack, Vorishnov can only watch as the brave American tank crews close and engage his tanks. 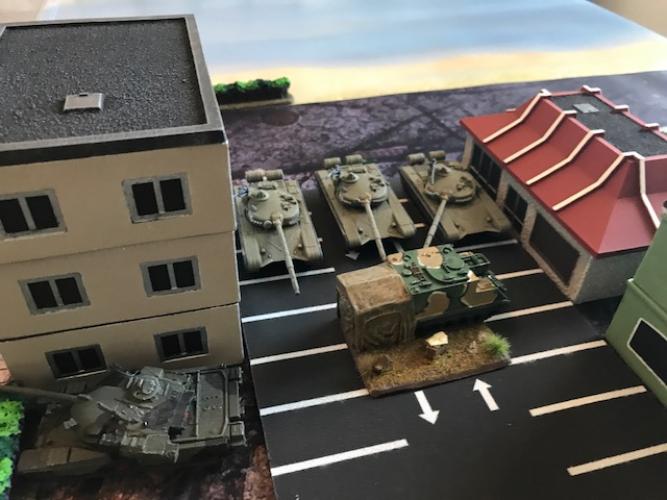 The Soviets cross in force. 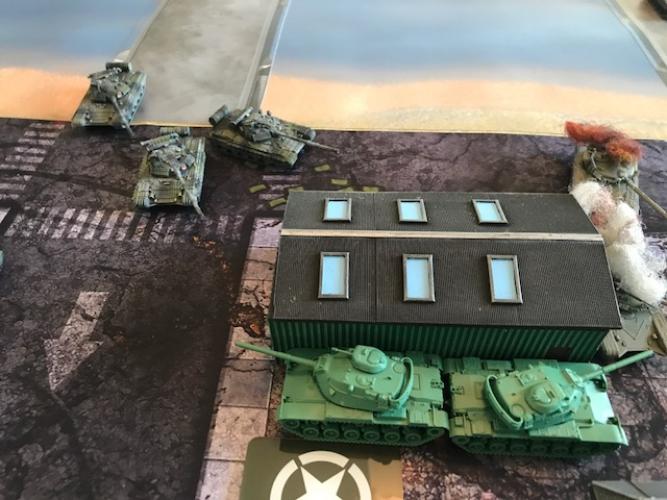 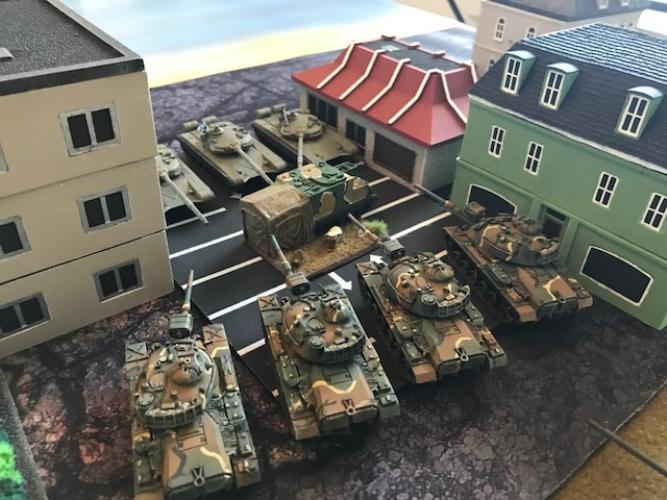 But American counter attacks blunt the Soviet spearheads and come close to turning the tide. 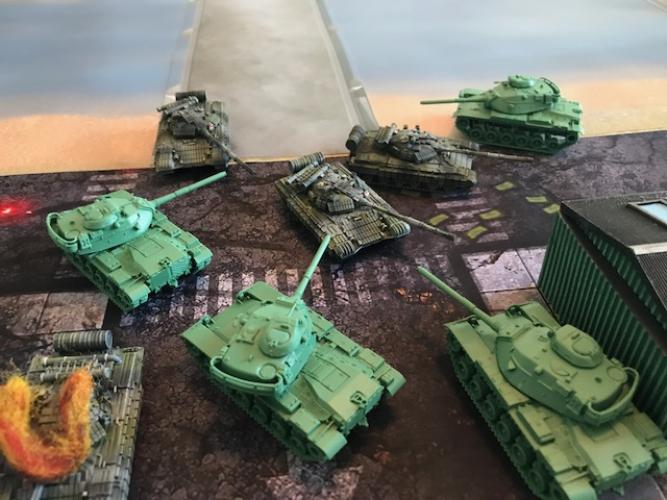 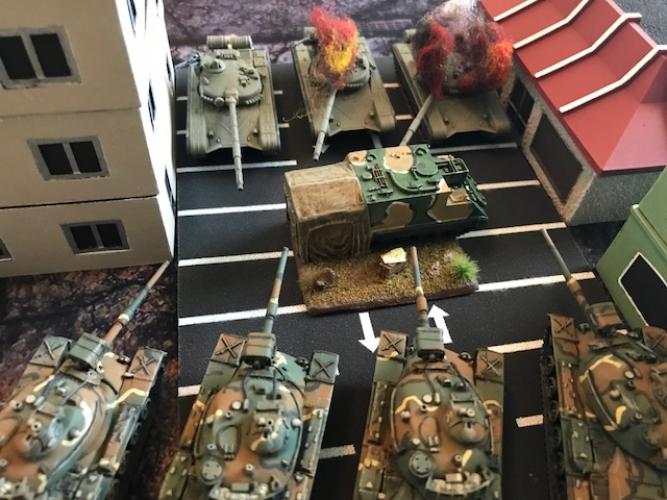 While the losses are heavy, Vorishnov can see the NATO commander has spent his last bolt. His tanks have forced the last of the British tanks to flee the field and the American tanks, while crewed and commanded valiantly, are no match for this tanks heavy guns. His surviving tanks maneuver around the wrecks of friend and foe to hunt down and eliminate the American tanks hiding in the town. Realizing that there would be nothing gained from further sacrifice, the American commander orders a retreat. 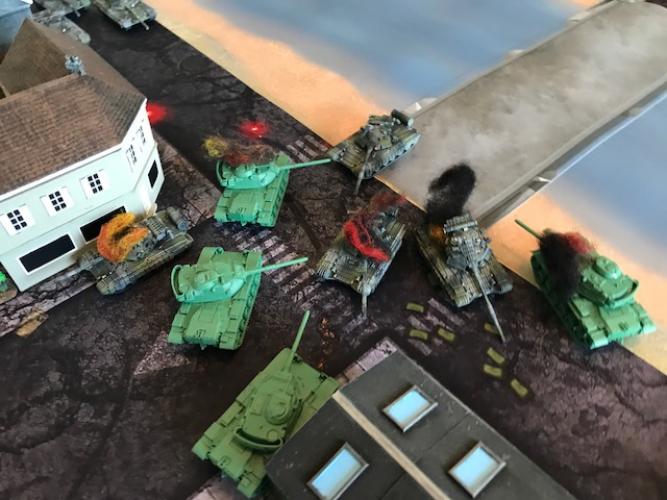 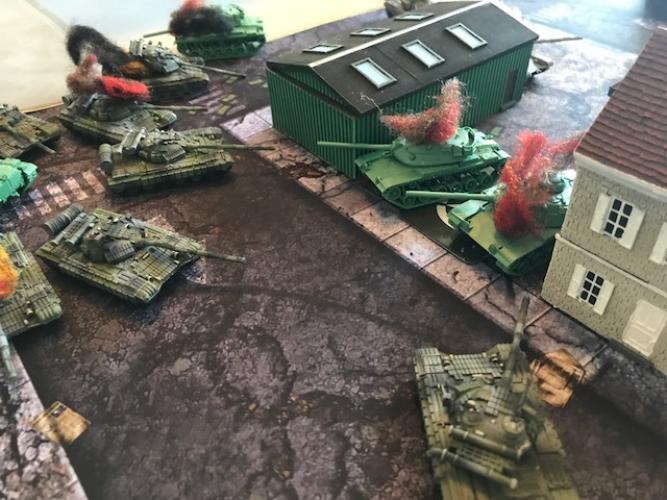 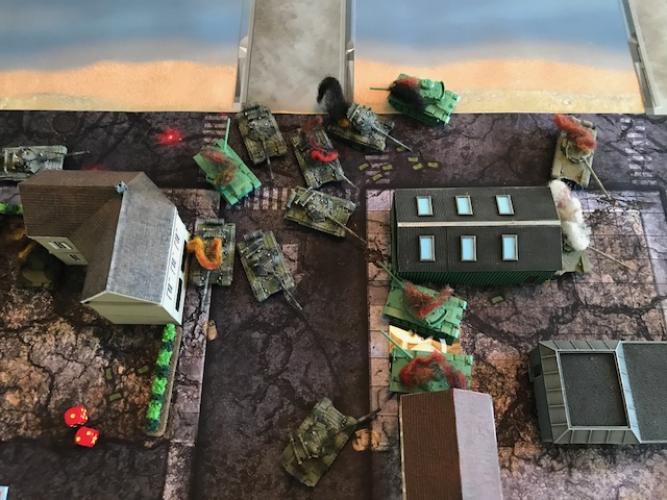 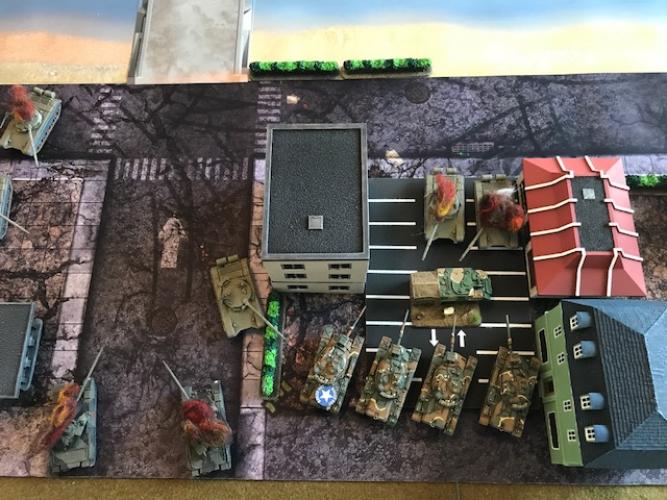 Vorishnov looks back to the eastern bank and the scattered wrecks of NATO and Soviet tanks. After a final counting, losses are worse than he had hoped, better than he had feared. Another river crossed, another victory for the Soviet Union.

NON-NARRATIVE NOTE: For my second game of the day, my friend wanted to play an all tank battle using his new M60s, but did not have enough for a full force. So, looking over my collection, we decided we could use my M48s as M60s and ally in some Brit armor to add some weight to his force. He also wanted to face some T-72s to see how they are different from T-64s, so I also made a mixed force of T-64s and T-72s. After the battle, we both agreed it was a great game, with the river crossing being a challenge as well fun. Another great game with a great friend and I look forward to more as the campaign rolls on!