The Red Fields of the Ruhr

After their successful engagement near Frankfurt, the 61st Guards Sverdlovsk-L'vov Tank Regiment, 10th Guards Tank Division, were being thrown into action north-east of Paderborn to halt a British attack from the Hanover region. Podpolkovnik Vorishnov wondered when his battered regiment would get a rest instead of being the front's fire-brigade. 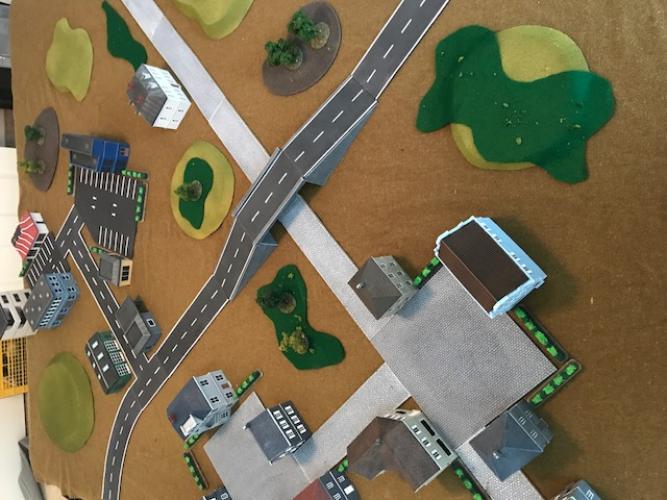 The British deployed in the main village. 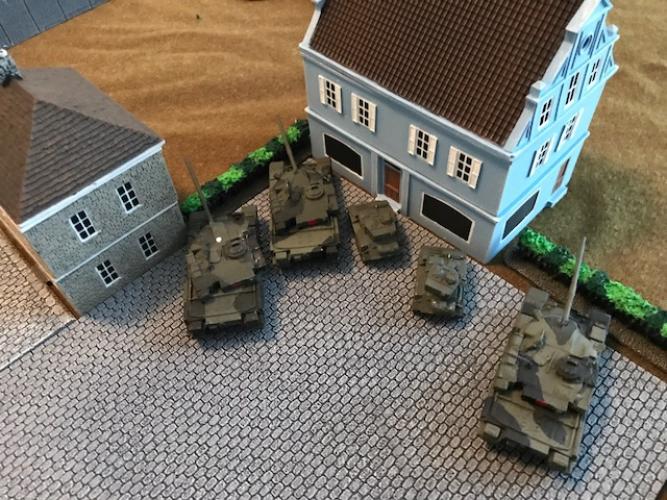 With the British spearhead forward deployed on the northern flank. 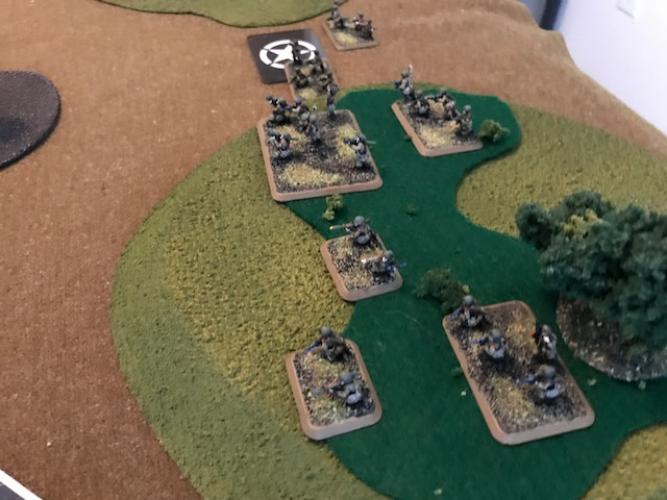 Soviet troops start dismounted to hold the vital pass through the hills. 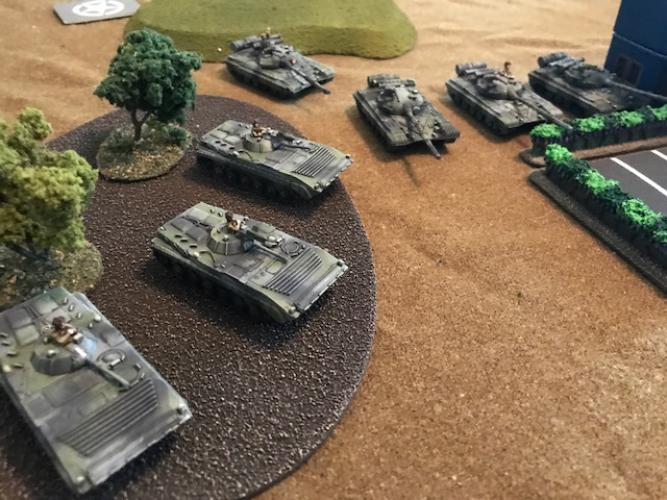 While Vorishnov leads the Soviet spearhead in the south.

Responding rapidly to the reports of Soviet forces in the region, the British moved into firing positions along their front. Their small recce troop cautiously moved forward, hoping to take the woods unnoticed and harass the Soviets. The few shots the British had either missed their marks or bounced of the Soviet armor. 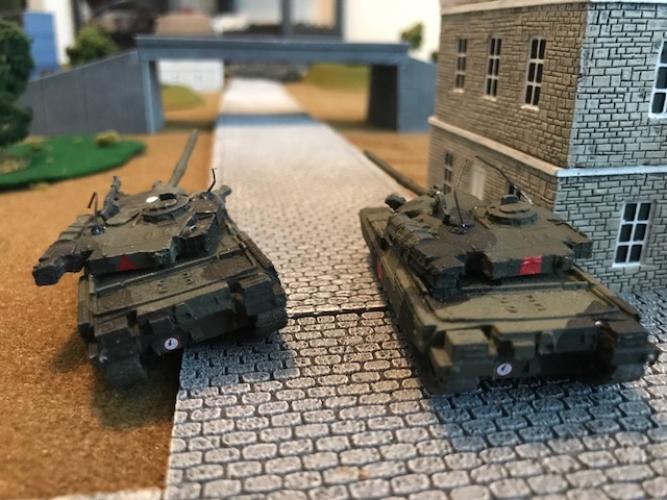 British attempt long range fire on a T-64 unit, with no success.

Realizing that the British lacked the numbers for a multi-prong attack, Vorishnov ordered his BMPs forward in the north, a unit of T-64s covering the center to move up, and his own spearhead to advance. In the north, the BMPs spotted and destroyed on of the light recce vehicles, forcing the other's crew to hunker down under a hail of 30mm fire. To the south, Vorishnov and his supporting tanks fired on a pair of British tanks, brewing one up. 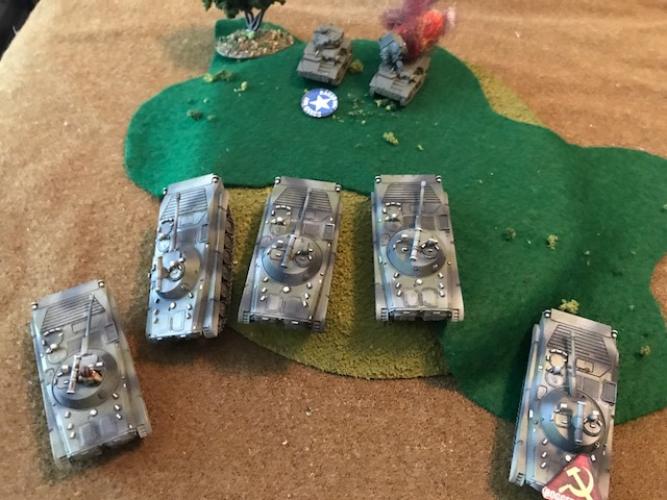 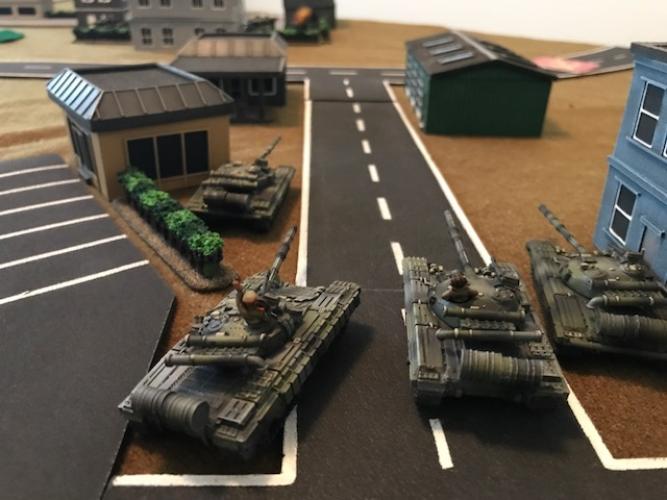 The Soviet's claim the first tank kill of the day.

Again, Vorishnov had little to revel in the little successes. A pair of Harrier swooped from the north-east, aimed at the intersection his tanks were in. While his supporting SA-8s claimed one, the survivor released its ordinance, peppering the intersection with cluster munitions. Leaving two tanks dead and another out of action in its wake, the Harrier screamed to the south, circling for a future attack run. Meanwhile in the north, the British positioned themselves along the highway, anticipating the BMPs and center T-64s to link up and advance. 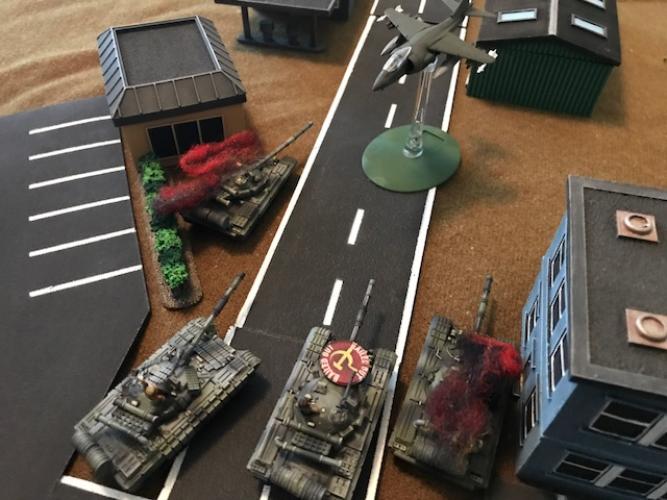 Leaving dead tanks in its wake. 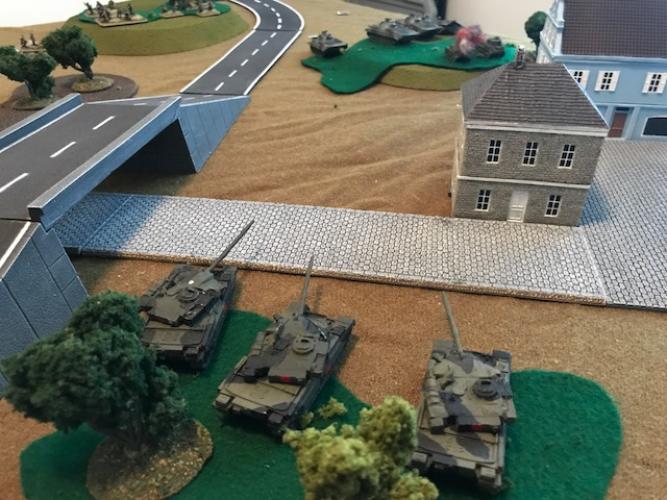 The British redress their lines.

With his spearhead slightly blunted, Vorishnov nevertheless kept to his plan. Motivating his remaining tankers forward, the hoped from building to building, using them to cover their advance on the autobahn. To the north, his BMPs eliminated the last recce vehicle and moved forward towards the village, while the center T-64s continued to fire on the visible Chieftains in the village.

"Discretion is the better part of valor, Comrade." 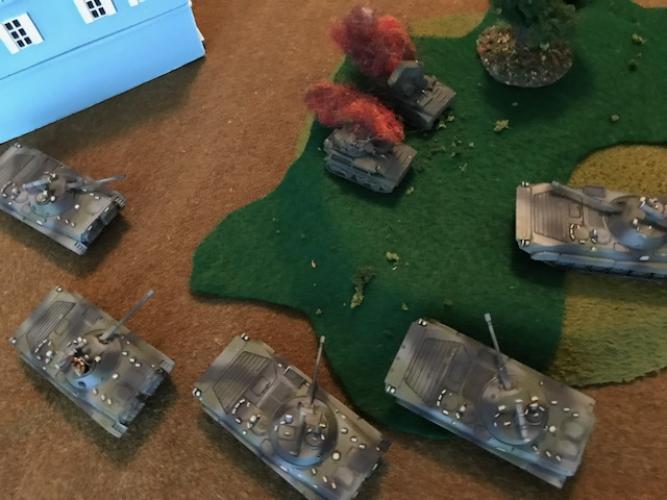 But just as Vorishnov's hopes rose, the sound of returning jets crushed them. The lone Harrier had returned targeting his BMPs in the north. The Harrier pilot knew his stuff, dodging SA-8s like some sort of flying devil. But before he could line up for the attack run, he blundered into a SA-14 missile and went down. Fearing that the initiative was lost completely, the British hoped to by some time by aggressively attacking in the center, hoping to quickly kill the center T-64 unit and then re position to kill the BMPs. But despite excellent firing positions, faulty British ammo saved the T-64s. 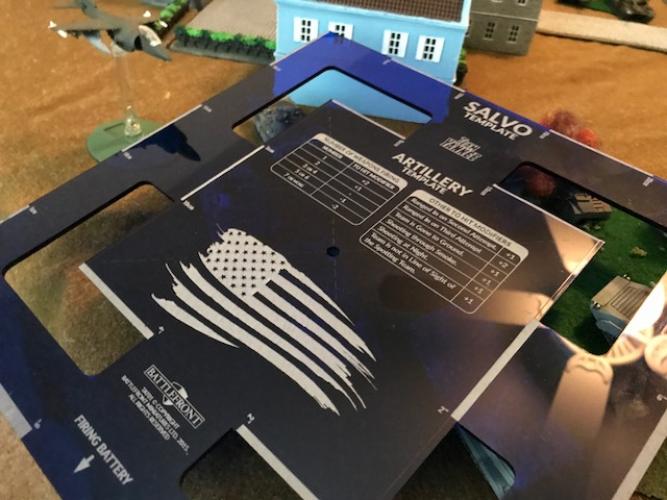 That was almost a disaster. 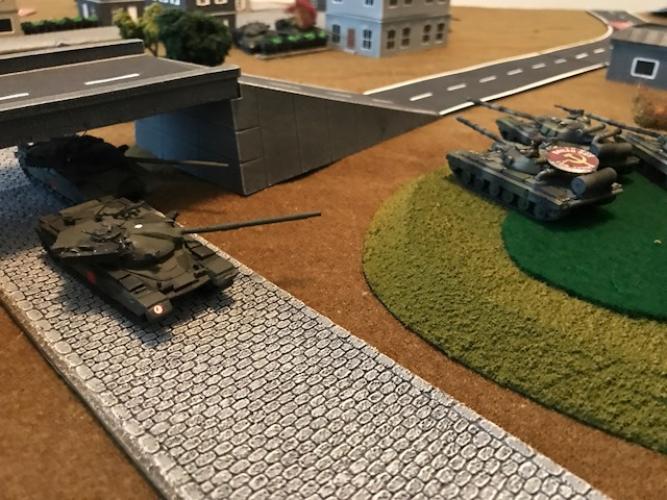 No longer having to worry about the air threat, Vorishnov pressed all his units forward. Like blocks in a row, he had arranged his advance to hit all along the front.

His center T-64s counter-flanked the British and claimed one, while his BMPs moved forward into the outskirts of the town, ready to rush the objective soon. In the south, Vorishnov, ever the gambler, rushed forward with his comrade to kill the last British tank in the south and claim the autobahn exit. 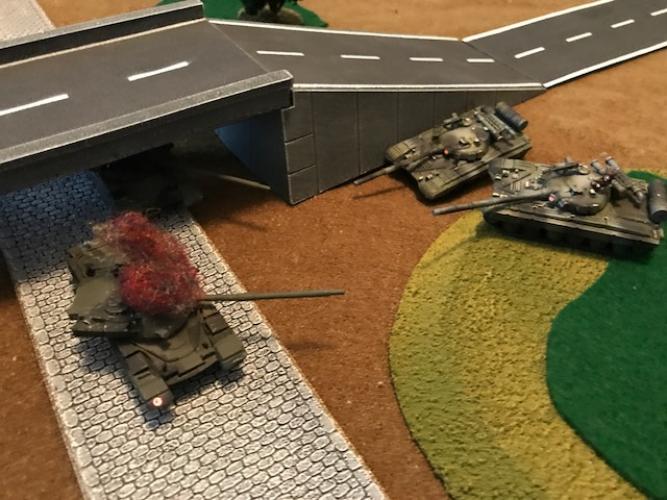 A death-spiral of flank-counter flank. 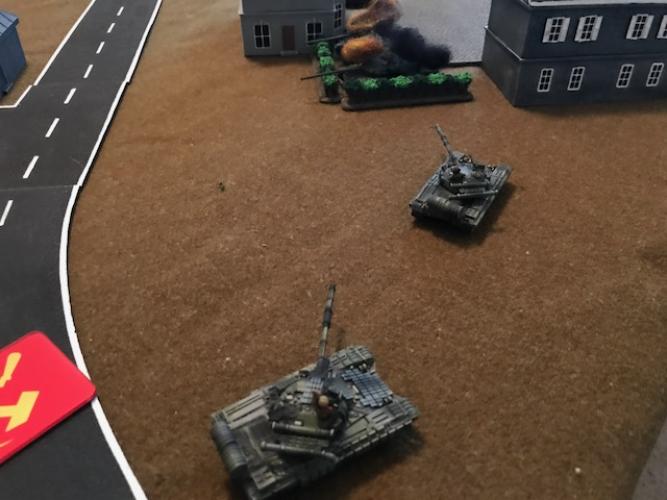 "Once more into the breach Comrades!"

The British, realizing that time and numbers were against them, made a desperate gamble of their own. Moving their surviving Chieftains into position, the fired every shot at Vorishnov and his comrade in an effort to kill them both. If luck was with them, they'd kill them and still have time to redeploy to hit the BMPs. 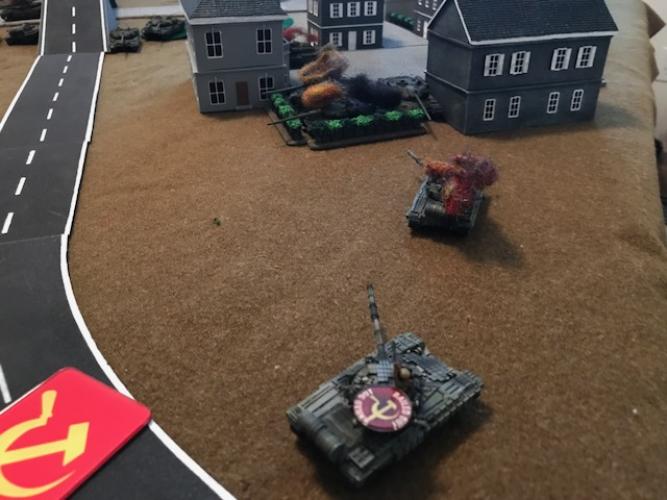 British fire claims a T-64 and bails out Vorishnov!

Vorishnov barely had time to react to the flash when a loud clang echoed around him. Ducking into the turret to clear his ears and eyes, Vorishnov could see that his fire control was out and his gunner was creaming they'd been hit. While Vorishnov sought to regain his senses, the rest of his force executed their previously given orders. The BMPs rushed the objective, claiming it. In the center, the surviving T-64s engaged the British tanks at point blank range, killing one and forcing the survivor to retreat. 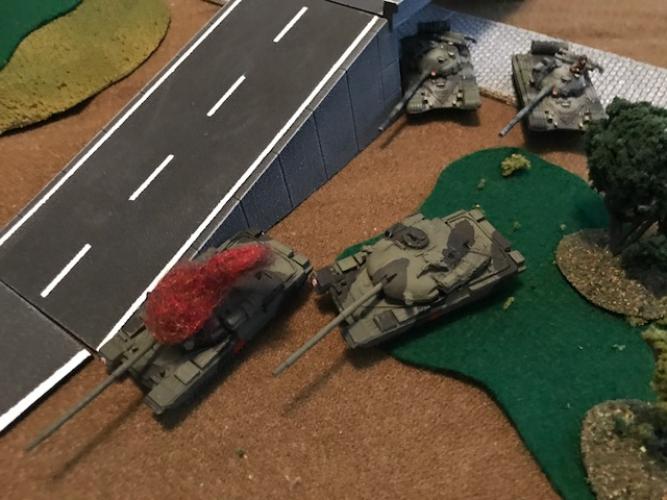 The Chieftains pay for their bold gambit.

When the expected second, killing shot never materialized, Vorishnov popped his head out and looked around. His hearing finally clearing, he could hear the sounds of battle dimming and his BMP commander telling him they'd claimed their objective and wanting new orders. As Vorishnov ordered them to prepare to pursue the British, he looked at the turret of his tank. Several blocks of ERA were missing and black mark scarred the turret side. Too close, much too close...perhaps he should reconsider his bold ways if he wanted to live through this war?