Podpolkovnik Vorishnov was tired. It had been a long day on the march, pursuing the British as they fell back into the Ruhr area. While elements still held out in the shrinking Hanover Pocket, other elements were withdrawing to the west. The leading elements of the 10th Guards Tank Division, with Vorishonv in the lead again, were to maintain contact. As the setting sun began to dip lower in the sky, Vorishnov sincerely hoped he could find the British before nightfall, when they would surely find him. 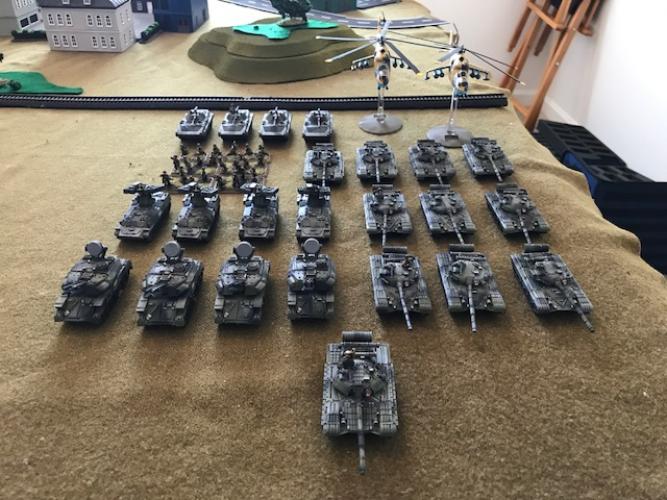 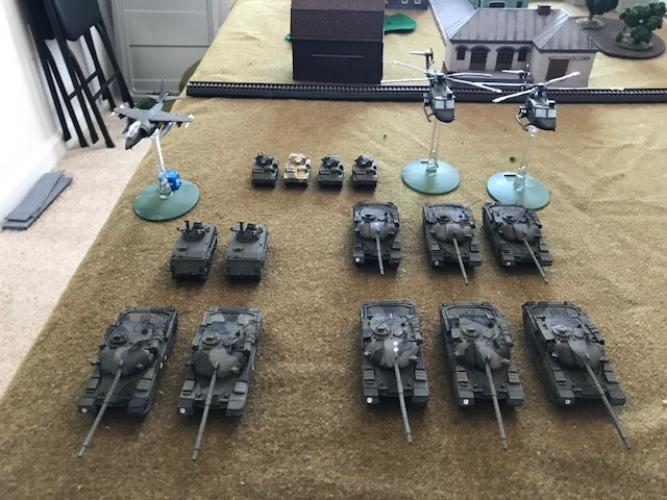 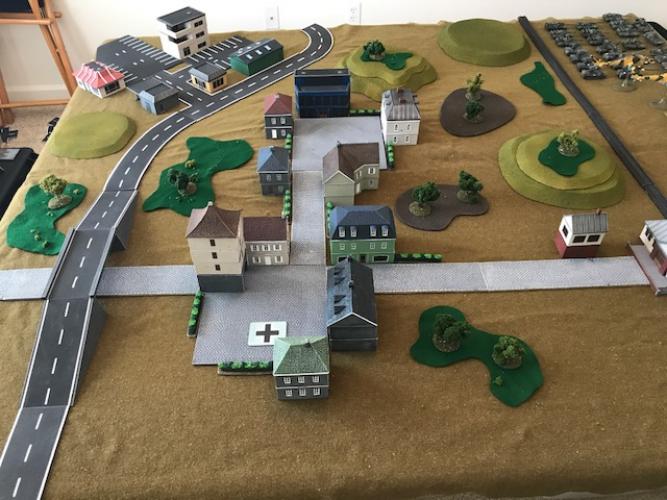 With sun dipping lower and lower by the minute, the Hind helicopters attached to Vorishnov's spearhead reported British armored vehicles in the town ahead, on the approaches to Paderborn. Desiring to confirm this report, and find and fix the enemy, he ordered his force to press forward into the town, dispatching the Hinds to cover a flanking force of his newest T-64s. 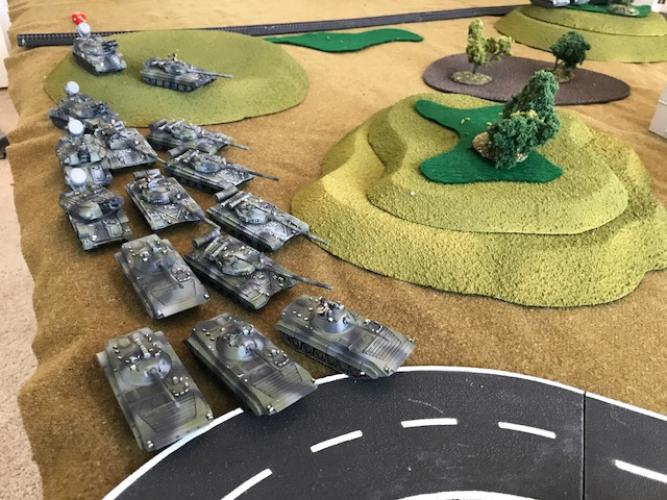 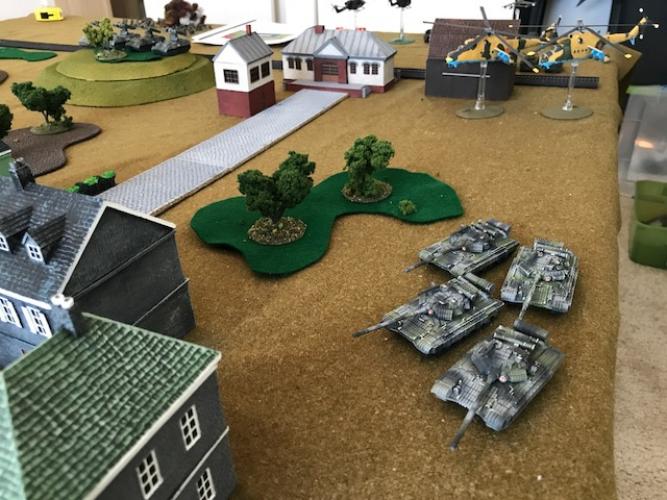 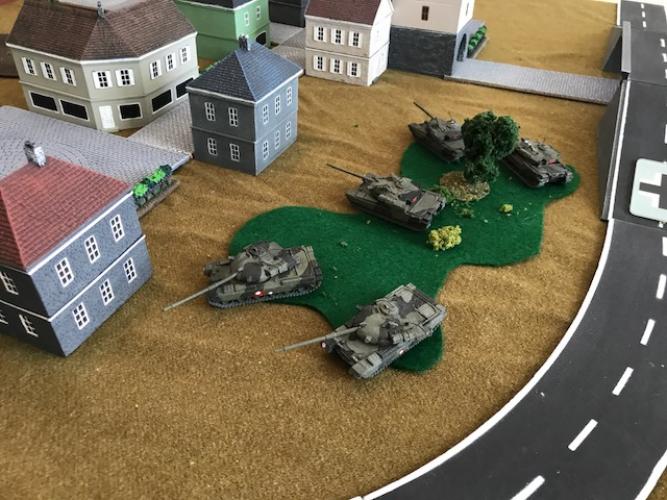 The British porcupine of death. 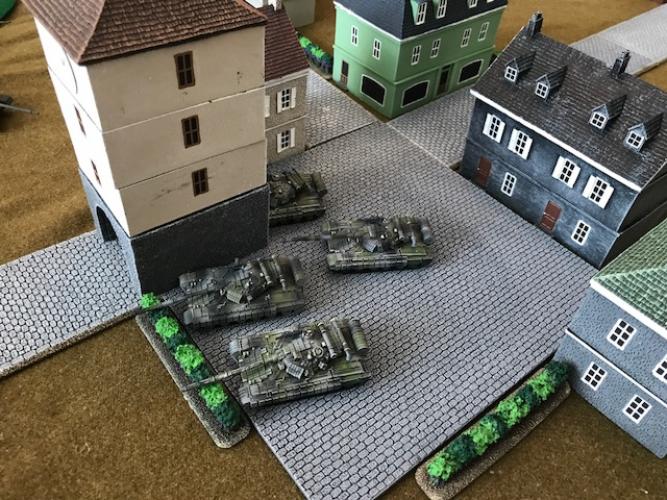 "No one is home Comrade." 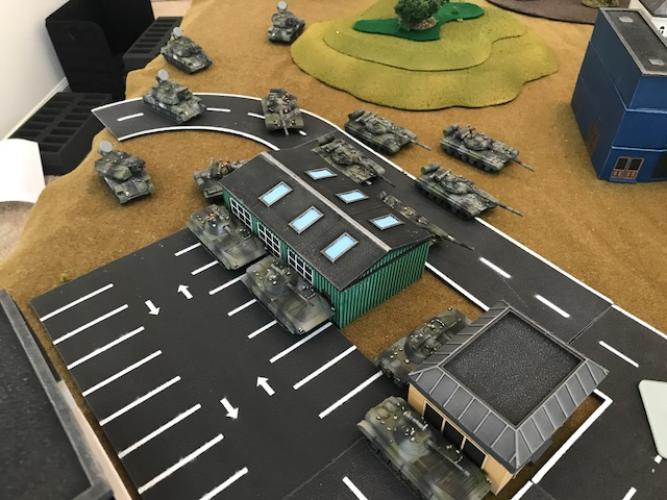 Hidden behind cover, the Soviet fire was ineffective, serving only to highlight the threat they posed to the British position. While no reinforcements appeared to be imminent, the British did reveal a hidden trap as a unit a Swingfires emerged from a wood line to engage the Soviet tanks. 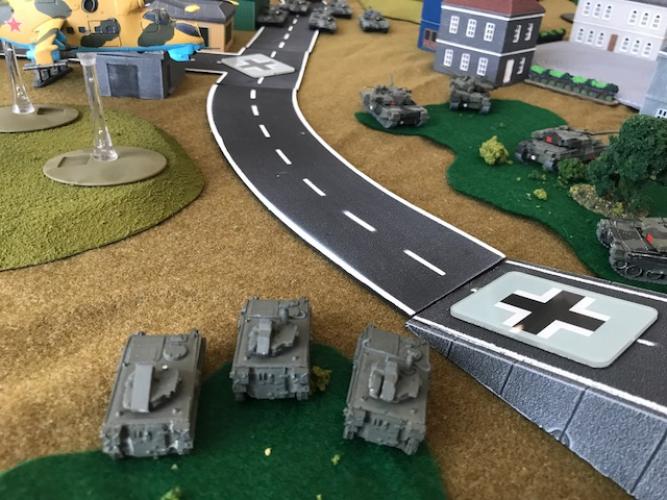 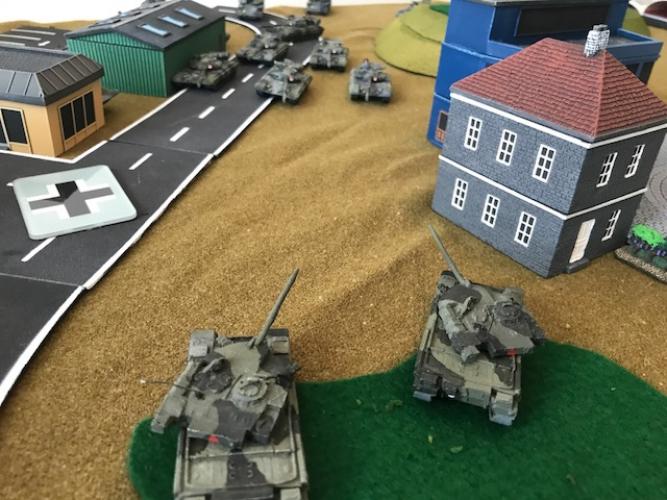 The duel at dusk begins!

It was clear to Vorishnov that the British were surprised by the boldness of his actions, as their fire was haphazard, only hitting a few of tanks. Despite this, he knew that the longer the long range duel continued, the more tanks he would lose. Vorishnov had to force the British tanks to displace, once mobile, their threat would be significantly reduced and their vulnerable flanks open. Vorishnov also could hear the distant sound of jets and knowing that his forces lacked the ability to effectively engage at night, this could only mean that NATO airpower was inbound. He needed to close the gap and grab the British by the belt to protect his tanks from air attack if his air defense forces failed.
Pressing forward, the pincers of his flanking force met at the woods to engage the British tanks from both directions. 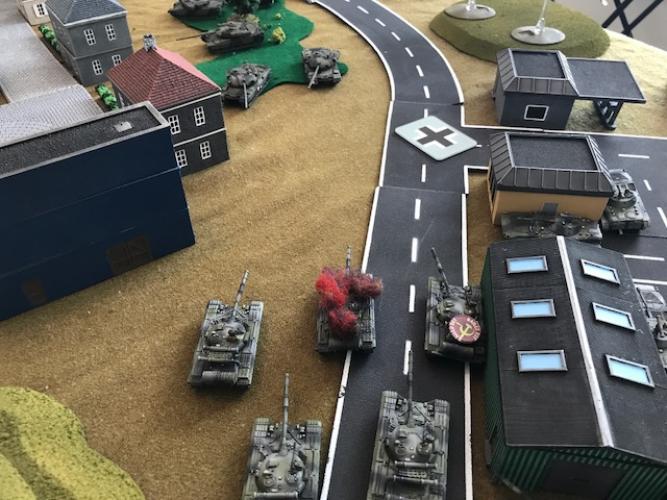 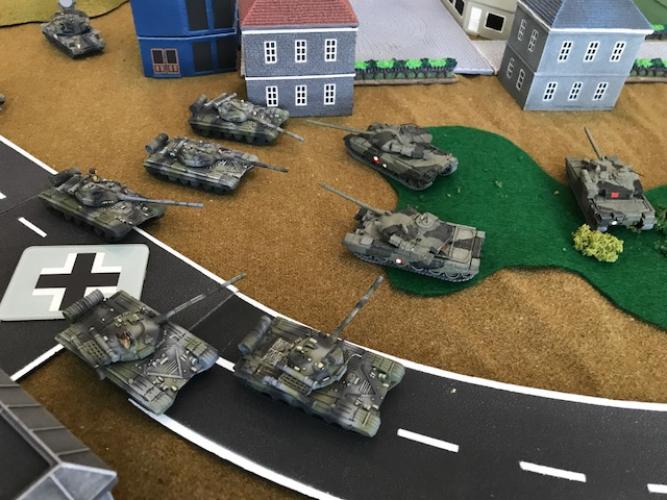 Getting close and grabbing them by the belt buckle. 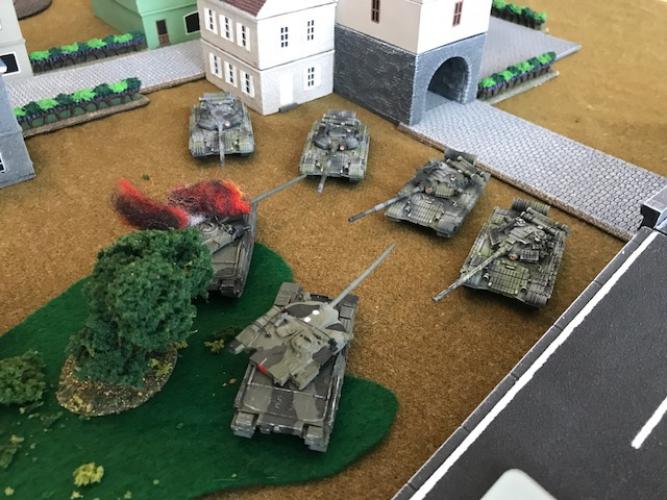 But despite Vorishnov's hurried orders, he had not been quick enough to react to the threat. A flight of British Harriers screamed from the setting sun, aiming right for this advancing tanks. To make matters worse, another troop of British tanks had appeared on his flank in the rest stop, along with a unit of British recon tracks. Despite his infantry occupy several buildings, the British tanks advanced on fired on his tanks. This looked as if was only about to go from bad to worse as the a lone jet survived the hail of SAM and AAA fire directed at the flight to drop its ordnance. 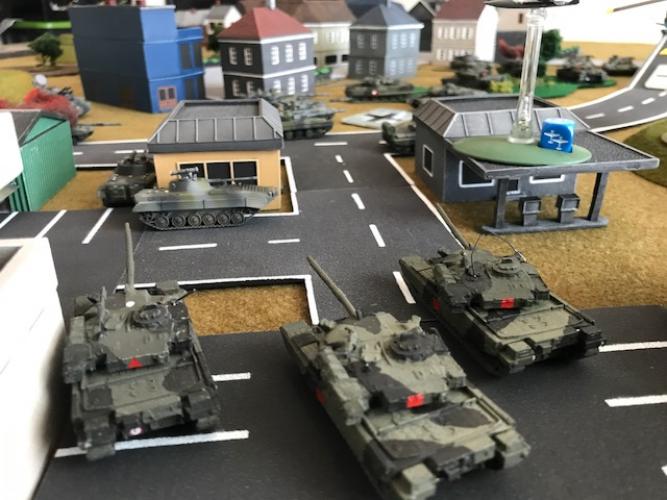 "Greetings chaps, how can we help you today?" 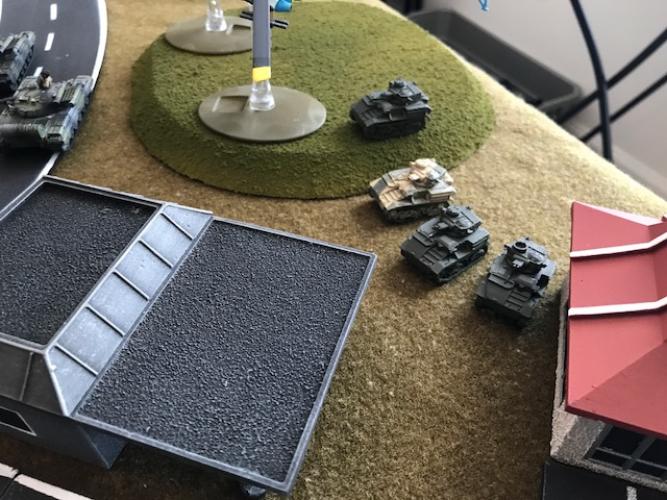 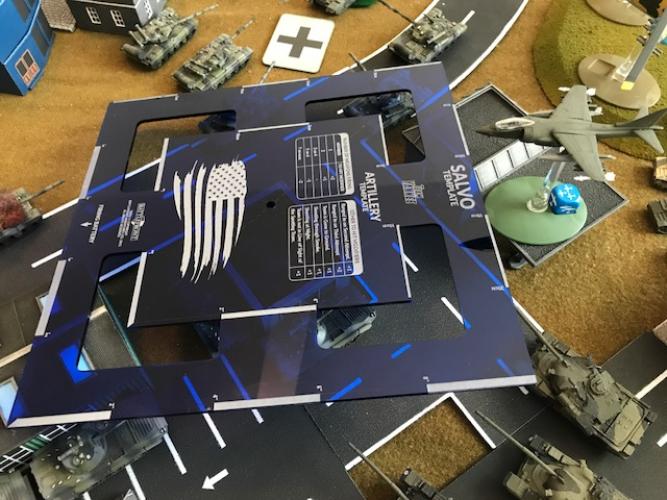 This is not going to end well for all those tanks... 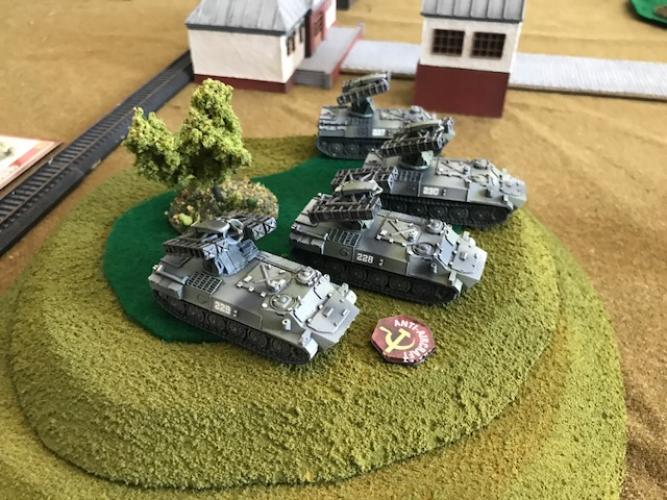 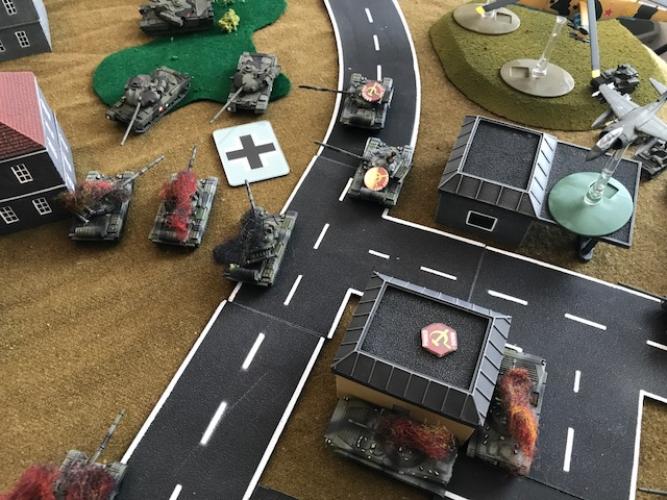 When he eyes cleared from the flash of the exploding bombs, Vorishnov could only see the fires of burning T-64s to his front. While the Harriers withdrew back to the west and night fell on the battlefield, the pyres of British and Soviet tanks provided an eerie glow to an already chaotic battle. While a few his tanks continued to maneuver for targets and his Hinds still trying to gain could sights for their missiles, Vorishnov told his drive to move behind the back of an apartment block. Hopefully in the chaos of the battle, the British would not notice his tank trying to sneak behind them. 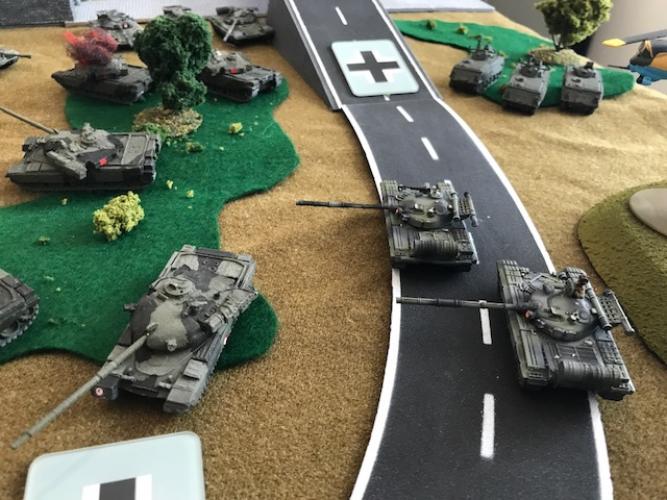 The air attack survivors continue to press on mission. 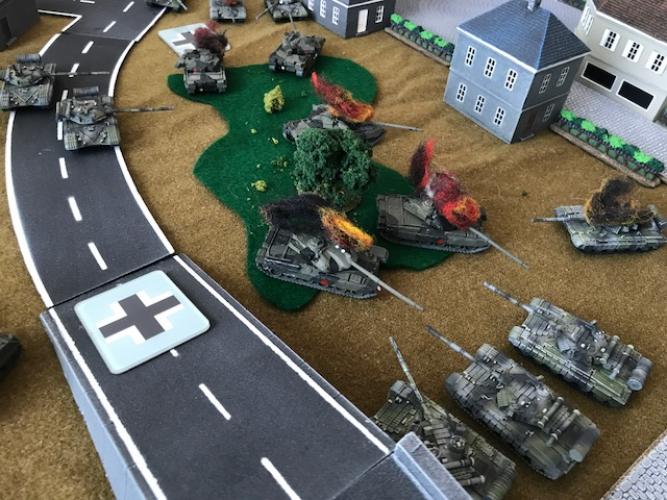 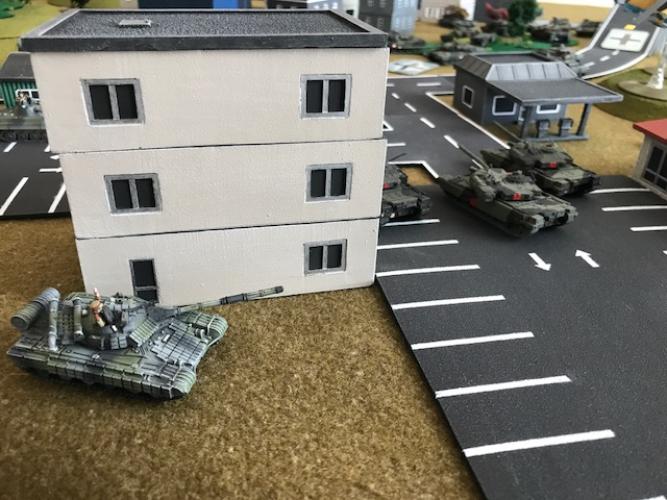 With the Soviets continuing to press forward, British helicopters emerged from the dark to join the fray. Simultaneously, the little Scorpions engaged the BMPs, knocking them out of the fight for good. The remaining British tanks closed with the Soviet tanks and with the Swingfires removed the threat along the road.

The last of the reinforcements arrive. 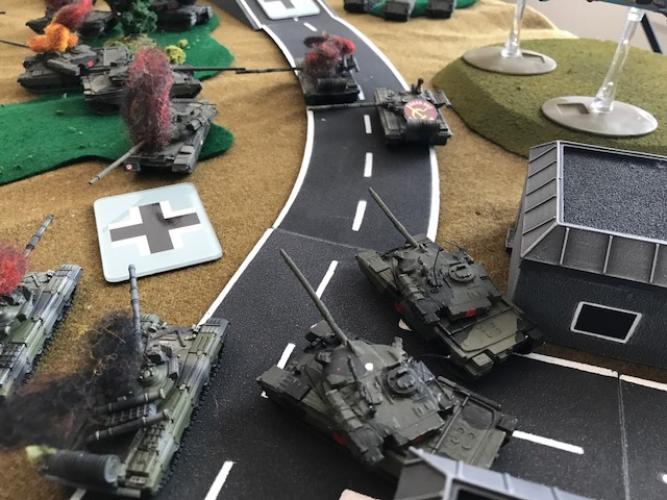 With the British now fully occupied in destroying his tanks along the road, Vorishnov's tank crept along as silently as possible, doing its' best impression of being a bush.

Ordering his new T-64BVs to sweep through the woods and his ZSUs forward to being the British recce tracks under direct fire, Vorishnov hoped he could salvage something from what was rapidly becoming an all out close quarters tank brawl in the dark. 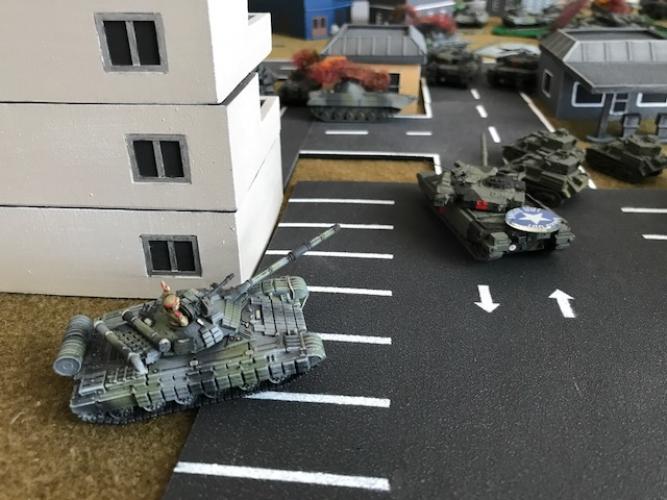 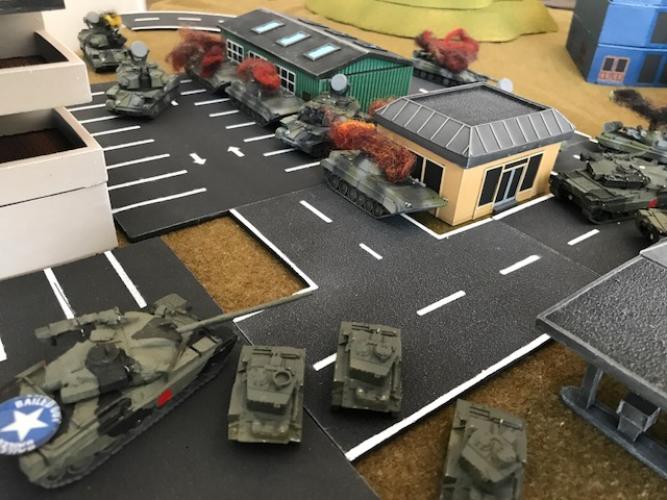 The last British tanks fired at what they could in dark, trying to discriminate the live Soviet tanks from the dead ones. As the advanced to sweep the clearing, Vorishnov's tank emerged from dark to fire on them from the rear. Despite the remaining British Scorpions shooting numerous blocks of ERA off his tank, Vorishnov survived the fire to engage the unsuspecting British tankers. 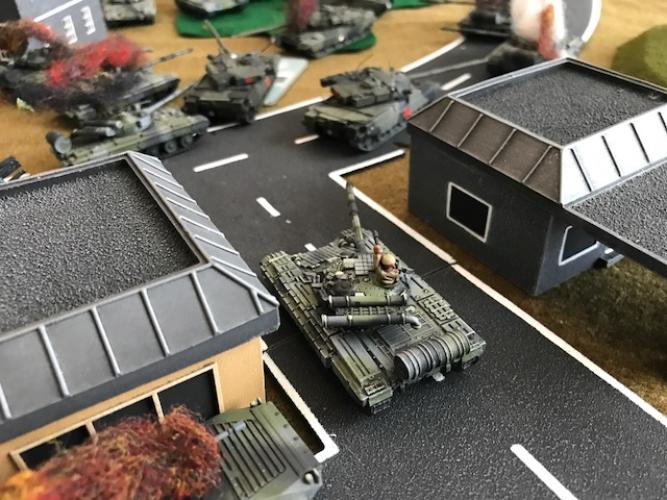 Vorishnov's T-64 emerges from the dark! 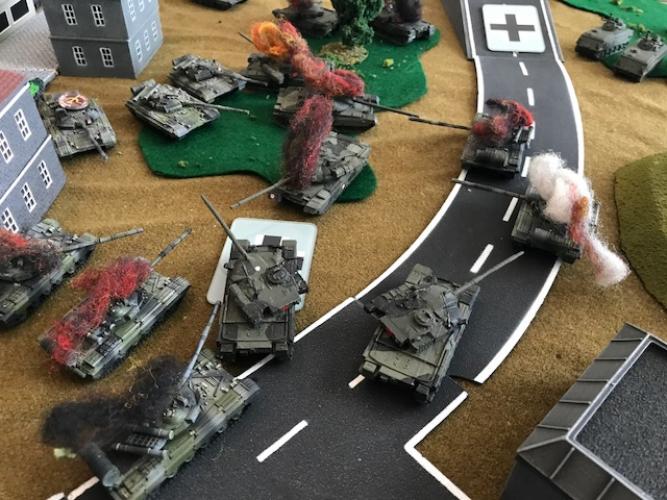 Combined with the fire from his T-64BVs and the Hinds finally joining the fight, the last of the British tanks exploded. While the Scorpions, having failed to deal with the lone T-64, were hit by a fusillade of RPGs from the nearby buildings. Those that survived fled the field, realizing that this battle was lost. As the remaining British forces silently faded into the night, all Vorishnov could hear was the cackle of burning tanks and the occasional round popping off. He leaned back against the turret hatch. It had been a long day.