Head to Head in Hanover

There was no rest for the victorious it seemed. Just as soon as he head forced a successful crossing of the Leine River, Podpolkovnik Vorishnov crossed back to the north shore. Ordered to take a tank heavy force and advance along the northern shore, Vorishnov was to probe for other potential crossing points as well as make contact with a suspected British counter-attack that was moving against the rear of the bridgehead. 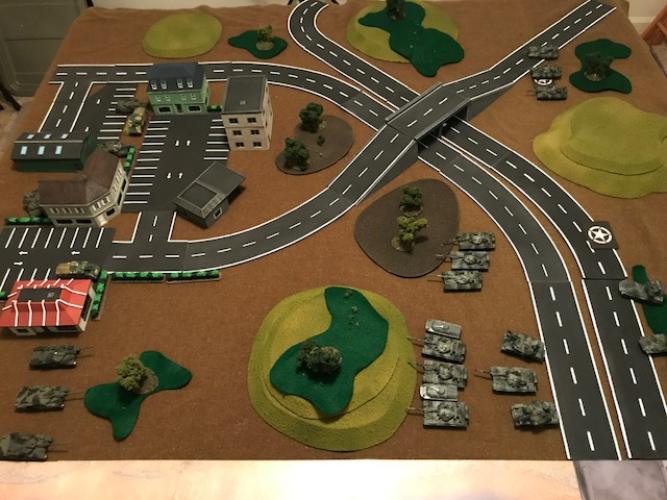 The British and Soviet armored columns hit each other. 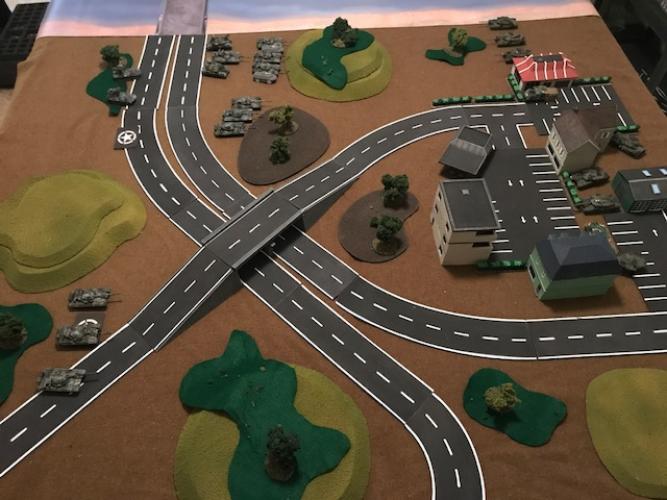 As Vorishnov's column approached an intact bridge, his scouts reported a British armored force approaching from the west. Informing him they had been spotted, both sides deployed for battle. The British commander deployed in covered positions within a small bunch of buildings, while Vorishnov maneuvered his forces forward, using the extra seconds his scouts gave him to aggressively close with his foe before they could claim other key terrain. 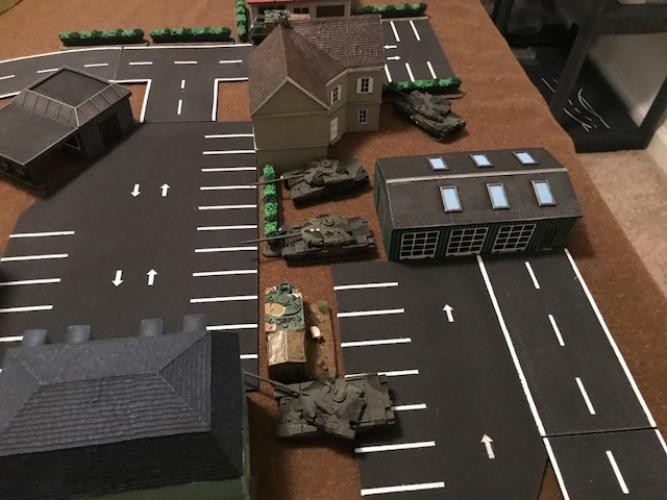 Brits in the village. 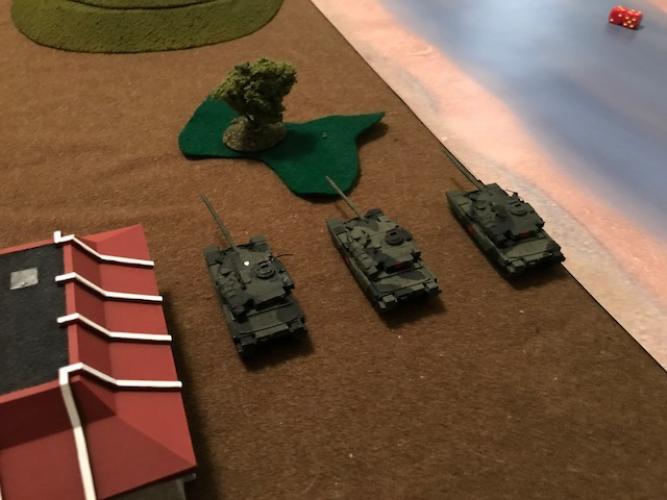 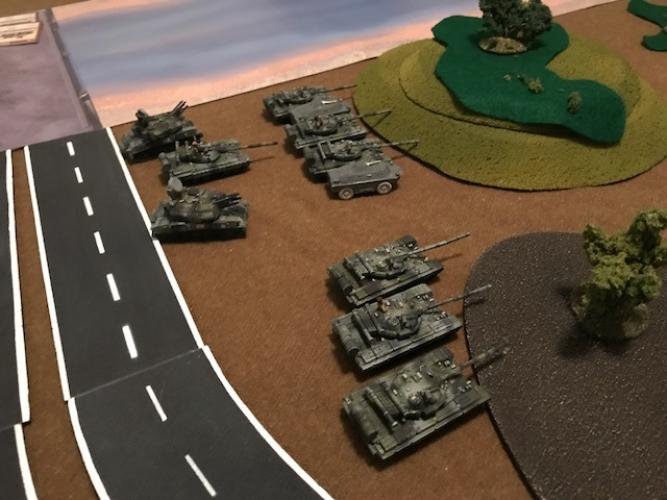 With the British tankers seemingly reluctant to leave their positions, Vorishnov decided to take the tactical initiative and advance to contact. While some of his tanks took overwatch positions on an overpass, other attempted to move into a wooded area, only to bog down in the soft soil from the recent rains. With his tanks in position, Vorishnov gave the order to fire on any known British positions. While several tanks were hit, only one was marked by the tell tale smoke and fire of a kill. Now it was the British turn... 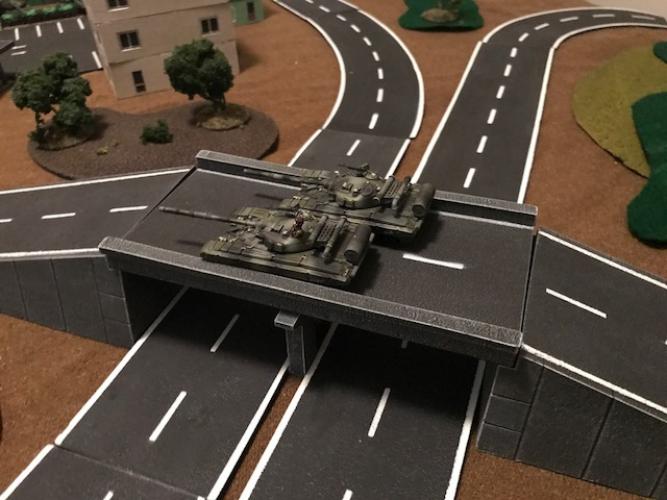 The Soviets claim the high ground! 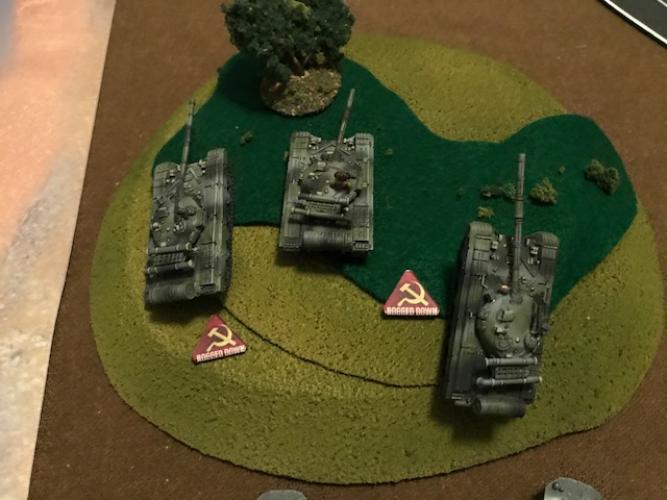 While the British commander could hear the roar of his promised air support in the distance, apparently the were farther away then he had thought. He hoped they'd show up before he had to win this fight all on his own. With some of his tanks in the open, the British commander was forced to maneuver his heavy tanks into the cover of nearby woods. This did not stop them from firing on every Soviet tank they could see as fast as they could, with a pair of T-64s nicely silhouetted on the over pass making for an attractive target. 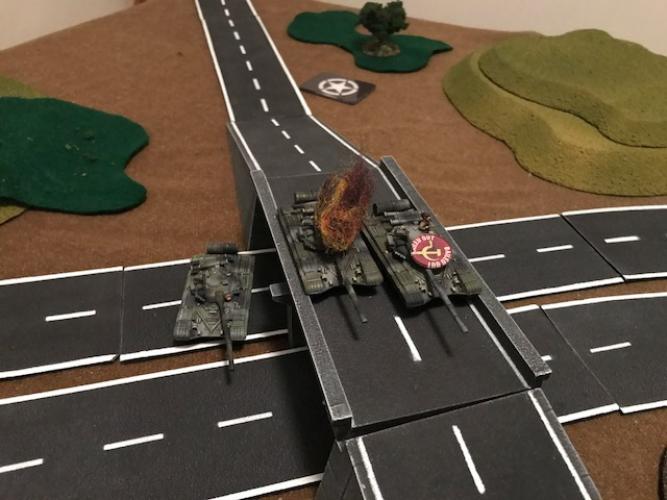 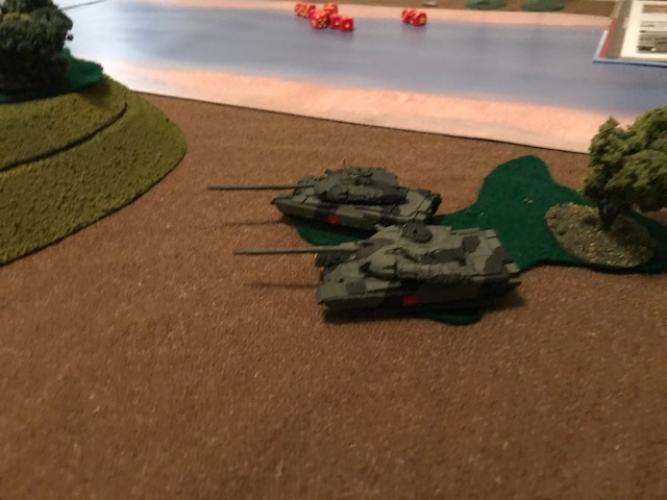 Chieftains move into the woods.

With most of his tanks unbogged and now in better firing positions, Vorishnov decided that a medium range duel was his best option. His line of tanks opened fire, scoring another kill, while hitting several other tanks and forcing them to button up. But Vorishnov had little time to enjoy this success as a pair of British Harrier screamed out of nowhere, seemingly aimed right for him and his tank! 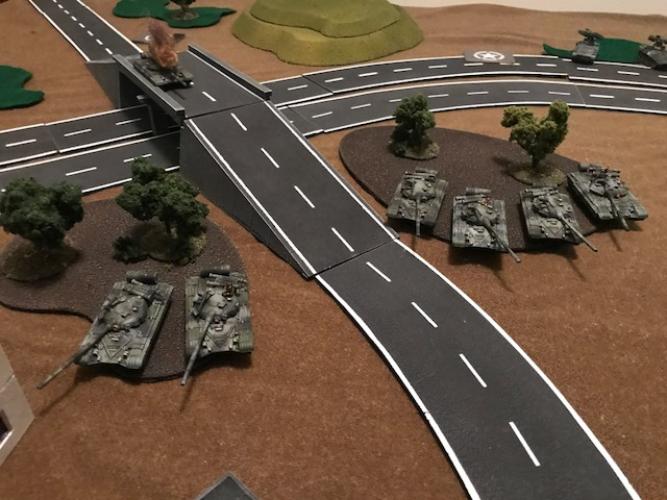 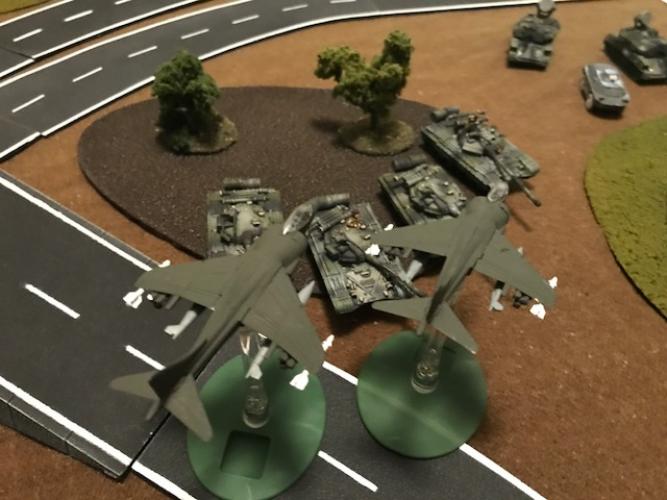 Well, this is not going to end well...

As the Harriers approached, the British commander could see a few SAMs and AAA platforms fire on the low-flying jets. One was clipped by a SAM and spun into the trees, but the survivor bore in and dropped his ordinance on the tree line, right on target. He could see a Soviet tank and BRDM on fire, and a few other Soviet tanks looked to be temporarily out of action, but the damage was lighter than he had hoped. His tanks sent another salvo in the Soviet tank line, claiming another and forcing its companion to button up, but the Soviets stubbornly refused to retreat. 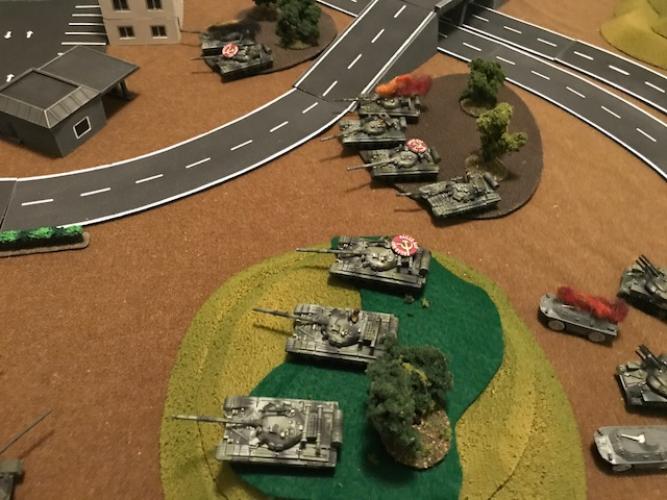 Realizing that another strike like that could doom his formation, Vorishnov ordered an all out charge on the British positions. Better to close the range and engage them at point-blank range and force the enemy air support off target. Rushing forward, Vorishnov's tankers engaged what British tanks they could, killing one with a pennant and forcing another from the field as it was pummeled with short range fire. 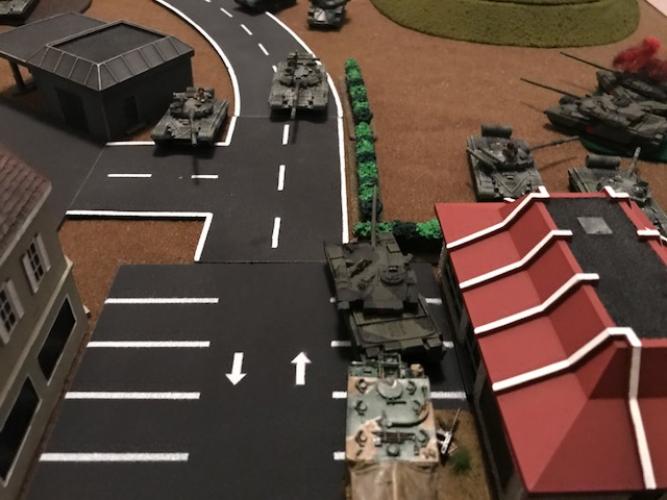 Grab them by the belt and hold on!

The British Troop leader tried to get his Squadron commander to respond. Only when he looked south and saw the burning pyre of a nearby Chieftain did he realize that he was now in command. While the Harriers had zoomed in for another strike, and the Soviet air defense had missed the zooming jet, the latest round of cluster munitions fell short and missed their targets. With his commander dead, the other troop killed or missing, and Soviet tanks threatening to flank him, the new commander decided that it was time to withdrawal before all was lost. Pulling his tanks back, his surviving tanks fired towards the Soviets to pin them down while the disappeared into the late morning mists. 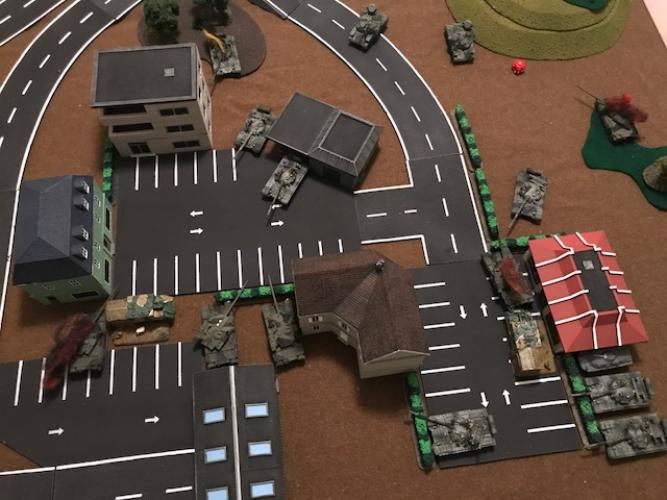 The British positions are overrun.

Vorishnov watched as the last few remaining British tanks disengaged to the west. Making contact with division HQ, he informed them that he had made contact with a British probing attack and forced it back. With the supply lines to the Leine bridgehead secured, Vorishnov began setting up his forces for a hasty defense, wondering where this war would drag him next.