The Devil to Pay

Lt Buford looked around him from the hatch of his M1 tank. The offensive toward Leipzig had slowed, but the 10th Cav was still probing forward, trying to find that magic sweet spot that would break the Soviet lines. As he analyzed the terrain with the Troop commander, he realized the key would be not only seizing the crossroads in front of them, but also the high ground near it. If the troop couldn't secure those heights, their'd be the devil to pay.

Major Bezarin too was looking at the terrain before him, and had reached the same conclusion as the the young American lieutenant. If he could not secure those heights on the other side of the crossroads, the follow on forces behind would have a hard time making headway against the Americans in this sector. A race to the crossroads and heights it was then, as Bezarin ordered his tank forward. 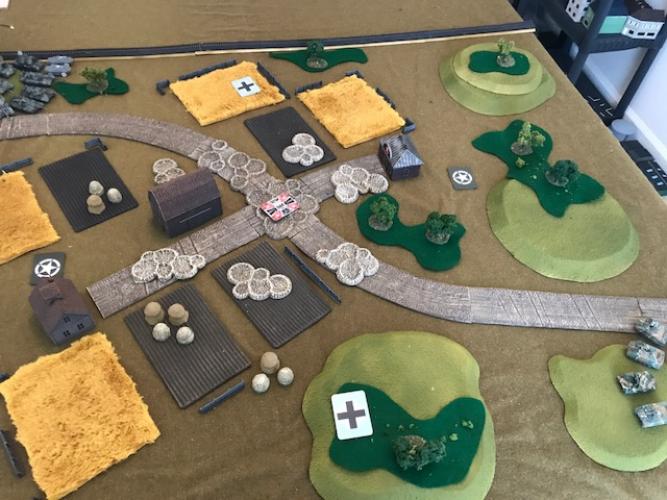 The crossroads and the heights beyond. 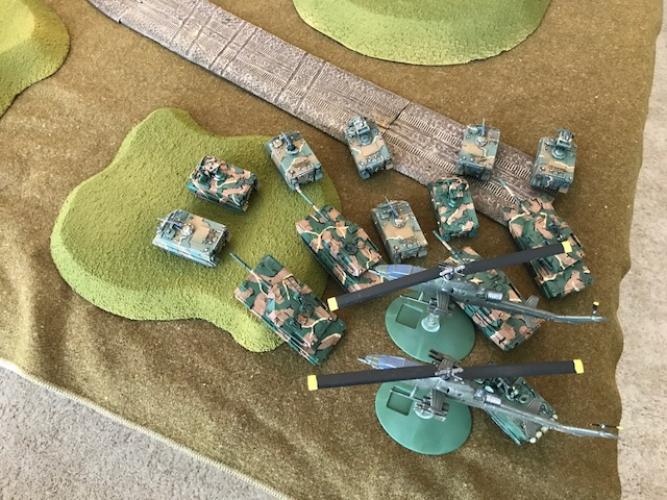 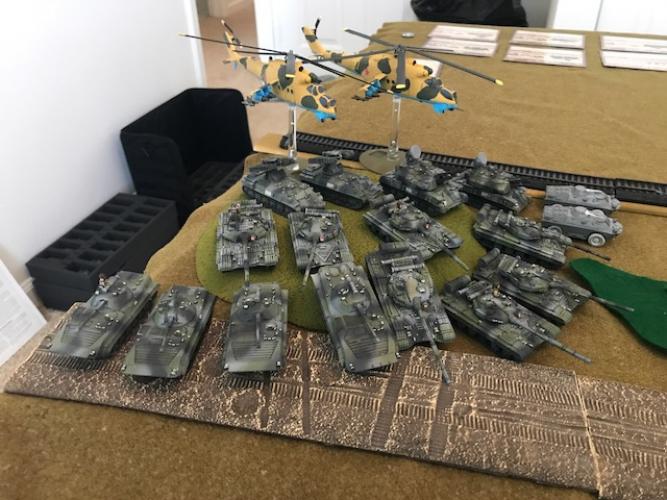 Bezarin watched as the Americans surged forward, with their tanks boldly advancing down the road, as if without a care in the world. Their scouts fanned out, disappearing behind the hills and trees. His forces did likewise, spreading out to cover the approaches and secure the farmstead. As the American tanks rushed down the road, Bezarin's tanks opened fire, but he watched them bounce harmlessly off. It was going to be that kind of day, as Bezarin internally sighed. 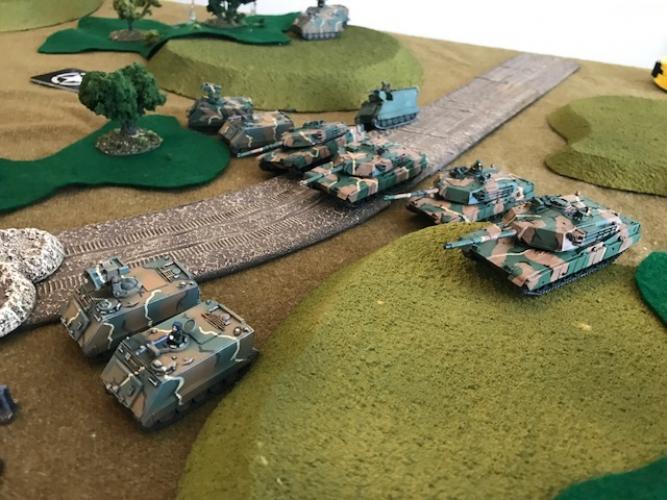 The American honey badgers advances with no care! 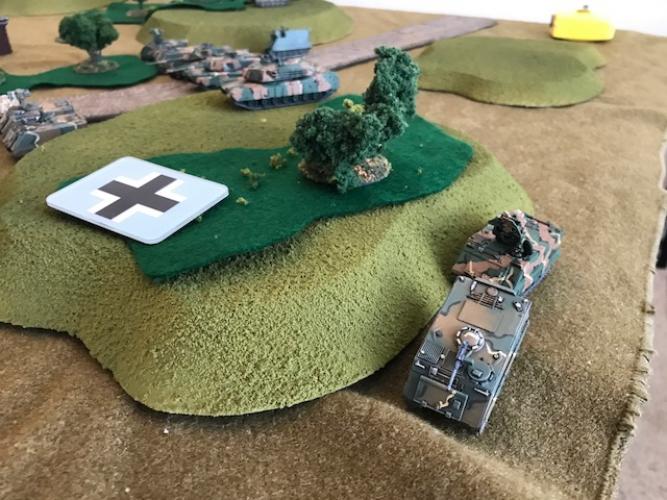 No, you can't see us, we are sneaking! 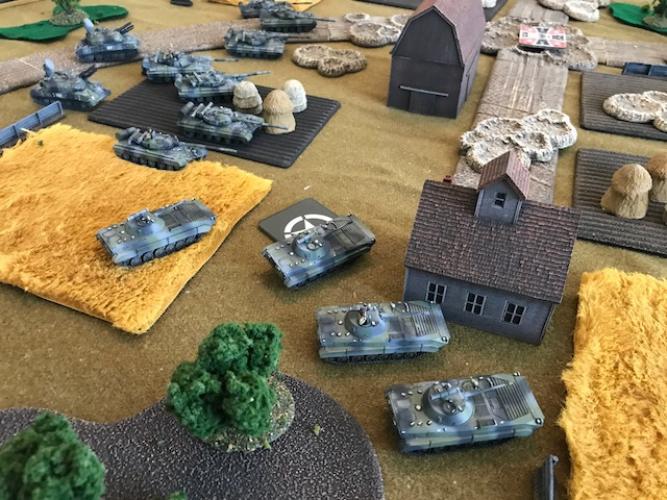 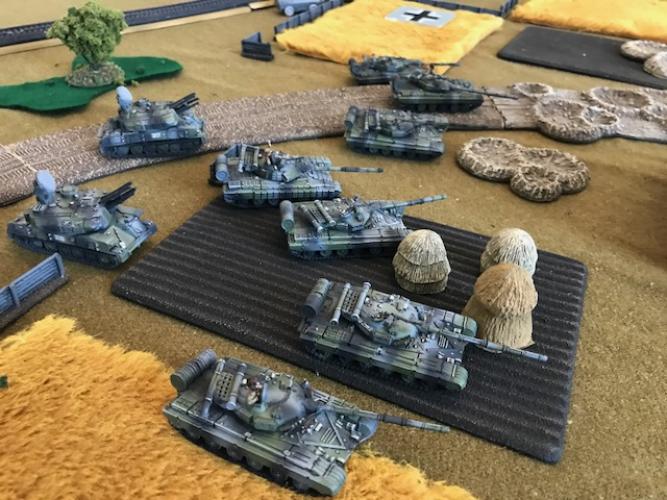 The Soviets move to secure the fields.

Ignoring the Hind helicopters that were maneuvering behind them, the American tankers charged into the crossroads, firing in every direction at any thing that looked remotely like a Soviet tank. Sometimes that actually hit one, destroying one and forcing another from the field. Meanwhile, the American scouts cautiously moved into firing positions in the various woods along the heights. Once in position, they let loose with a whirlwind of missiles at the motor rifle company, claiming every BMP they could see. Simultaneously, the American Cobras engaged the Hinds in close range dogfight out of range of Soviet air defense. Claiming a kill and forcing the other to disengage, the Americans were now the master's of the sky. 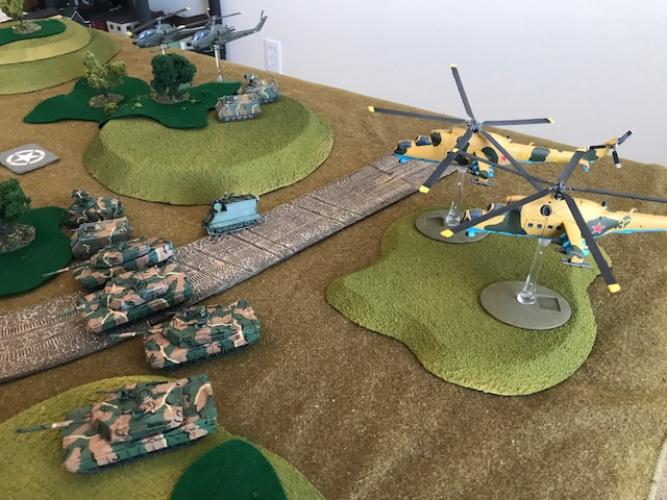 Not even Hinds can make the American honey badger care! 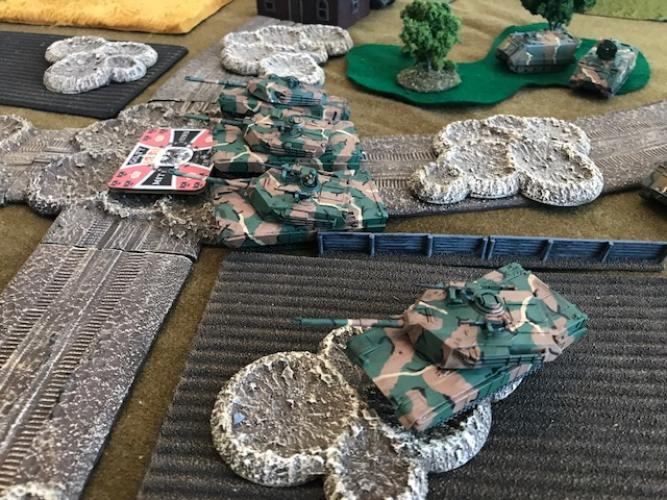 "Comrade, do you hear someone screaming 'Leroy Jenkins'?" 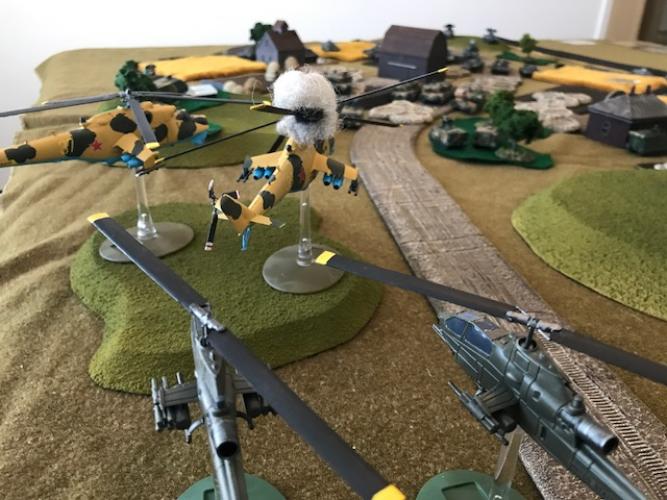 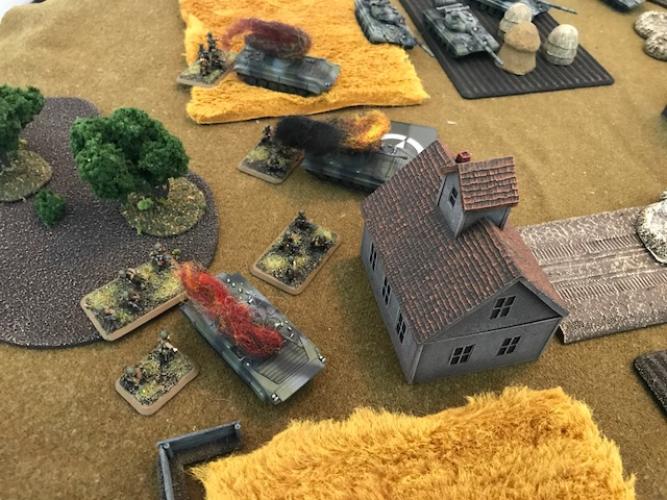 "Look on the bright side Comrades, at least we made it to the objective before the Yankees blew up out rides..."

Bezarin could only stare in abject disbelief at the sheer recklessness of the American advance. The fact that so far it was working did not help his attitude. Ordering his infantry to dig in and his tanks forward to kill the American tanks, he only hoped that he could kill the American tanks or at least force them to retreat. If that happened, then he could deal with the soft American missile vehicles and secure the objective. 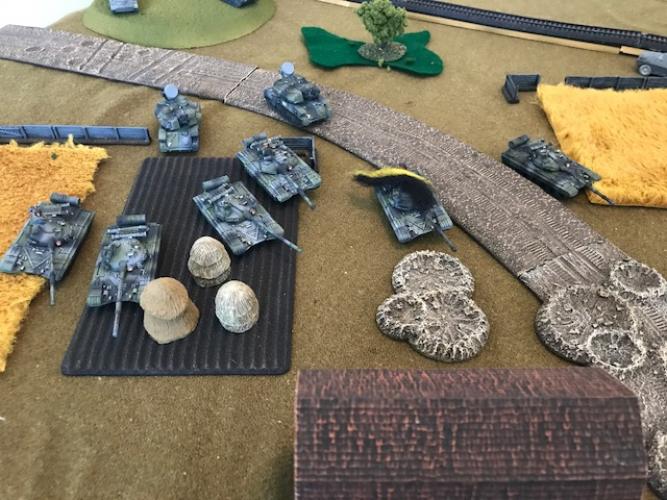 But it was not to be. While his tanks managed to claim two of the American beasts, the other two shrugged off his fire and kept charging forward. As an American tank rushed past his position, its turret swinging to point at his tank, Bezarin could not help but sigh at his luck... 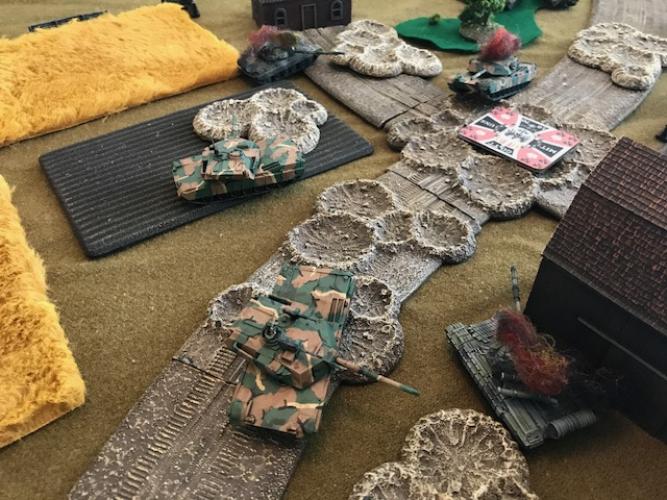 Lt Buford could see the look on the face of the Soviet tank commander just before his gunner fired and the tank exploded. With his M1s now through the Soviet lines, and the rest of their tanks being destroyed by long range missile fire, the remaining Soviet units were withdrawing back towards their lines. While he'd lost half his platoon, the Troop had done. They'd held the high ground.