Its Quiet. Too Quiet.

It was a dark, not particularly stormy night and like the veterans they had rapidly become, V. Brusilov and his officers had found some good cover and dug in before darkness. Assigning Brusilov's entire force to escort a convoy seemed counter to prewar doctrine but with the open flanks and bypassed units operating in rear areas he assumed command knew what they were doing. It had resulted in his command being scattered along miles of roadway but there was nothing to be done about that until the convoy had reached it's destination. In fact, the staff officers had dithered before deciding that the risk of daylight air raids was less than the risk of a nighttime ambush by ground forces, which meant his command wasn't going to reach the destination before dark, prompting a halt only slightly beyond the halfway point (not to mention an embarrassing map reading error, compounded by road signs swapped by the Germans with malice of forethought; fortunately a junior lieutenant could be blamed for the error). Even his beloved T-64s with the latest in Soviet infrared gear were not the equal of even the second line American tanks at night. Best to dig in and hope to avoid attention during darkness.

The planned quiet night was not to be, as the sound of vehicles approaching was unmistakable and the speed and fluidity of their advance suggested the worst case might well be in prospect. Squinting through some looted German binoculars, Brusilov had to admit that the NATO vehicles were probably American and were using the latest in night vision and thermal imaging gear.

Force size was 90 points each. The Soviet side had a T-64 battalion, a motor-rifle battalion and an attached East German T-55 battalion. The American player deployed an M60 company, and a scout company with attached Abrams platoon and four Cobra helicopters.

Using the Team Yankee More Missions rules, Dust Up was selected, the Americans (Fitzi) were the attackers and the first mover. Dawn was rolled as the time of day. Objectives went down on the rear and front of the Soviet deployment area and similarly in the American area.

The Americans choose to deploy a the infantry company on board using a Spearhead move to place the Soviet forward objective under immediate threat while holding the tank company as reserves. The American infantry stayed mounted on in their APCs. The Soviet player deployed most of the Soviet infantry and tank battalions on board, with the Storm AT company as support; the East German T-55 battalion was in reserve along with some Soviet recon elements. The infantry was dug in on each objective with their transport BMP-2s in support. The T-64 battalion deployed between the two objectives ready to support either. Uncharacteristically, no Soviet scout units were deployed. 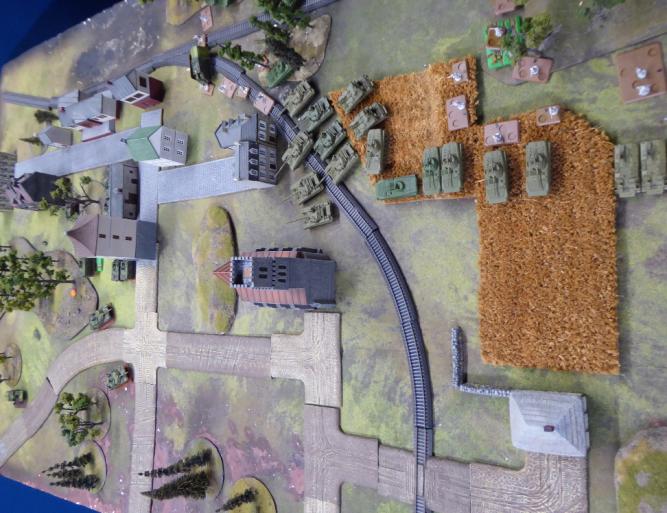 Initial setup. The Soviet deployment area is on the upper right, the American force has infiltrated the town from their lower left deployment zone.

The American player maneuvered his vehicles from his hidden deployment zone to advantageous positions for an assault on Turn 2. Only the two Abrams tanks fired and they missed.

The Soviet player contemplated the board, with the American's setting up for a quick rush. With all the American units deployed forward, he decided to go on the offensive, despite the Soviet inferiority in night fighting. The two T-64 companies and their commander swept over the low hill and into point blank range of the Abrams. Two tanks achieved flanking shots. The BMP-2s on the forward objective, minus one that bogged, moved forward to engage the M-113 mounted infantry at close range also. Meanwhile the remaining BMP-2 transports from the other infantry company moved forward to the road leading to the American objectives. Ironically, the T-64s with the flanking shots missed, but the second company achieved a kill and a bail from the front, after which the American's failed their morale check. Artillery support shifted to the American transports but the two hits bounced. One BMP-2 killed an American M113 transport. 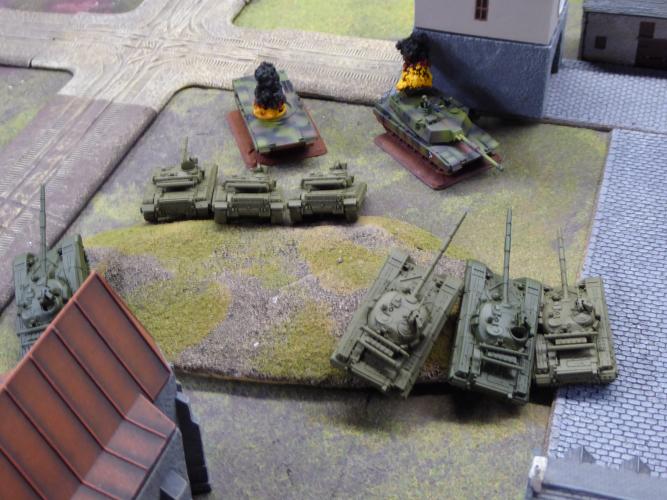 Two companies of T-64s manage to eliminate an Abrams platoon.

The American commander focuses on taking the forward Soviet objective per their plan. Shooting kills an infantry stand and the unit is pinned with 10 hits. An M113 unit assaults but suffers two bailed tracks and falls back, subsequently routing off the table due to bad morale. An infantry assault likewise falls back after loosing a stand. Meanwhile other Americans shoot up the advanced BMP-2 unit with one kill and two bails. With the infantry battalion commander attached, the BMP-2 unit routs off the table taking the battalion commander with them. 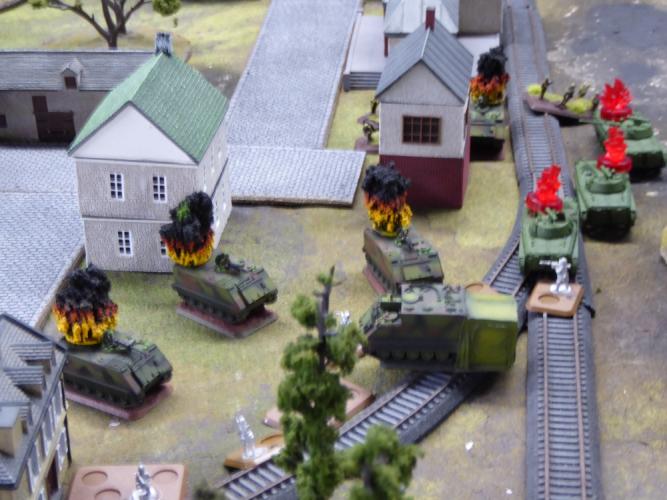 The Soviet T-64s advance, with one unit contesting the closest objective and the remaining tanks form a firing line facing the American infantry. Shooting at night, the T-64s bag two infantry, the artillery achieves a pin, and two different Shilka units manage to see and kill an infantry stand each. Meanwhile the remaining BMP-2 unit motors down the road (at the limited rate allowed at night) headed for the next American objective. Things are looking good.

The American is in big trouble but providentially gets a reinforcement on his first try. After consideration, he picks a M60 platoon, which rolls onto the table opposite the contested objective and murders the T-64 company on the objective from the rear (the Soviet rear armor can't stop the hits). Three kills and the game continues. Meanwhile, the American infantry take a break on assaulting the Soviet objective and infiltrate buildings in the town.

No reinforcements and darkness continues. The remaining T-64 company and the tank battalion commander drive to the objective and set up facing the American tanks, their comrade's burning vehicles providing cover to the rear in case the American infantry try their luck. The remaining BMP-2 unit splits, with the lead tracks still headed to the next objective and the stay-behinds trying their luck on the M60s. One M60 and an infantry stand are the sole results of all this tactical brilliance.

Daylight! Reinforcements (another M60 platoon)! The Soviet Storm unit, which long since maneuvered into an overwatch position might now become a factor. But first, the objective must be cleared. The M60s maneuver forward, careful to avoid flanking shots from the BMP-2s and always facing the T-64s. Fire into the T-64s and BMP-2s results in kills on the BMPs, T-64s and the T-64 battalion commander. However, as specified by the Soviet player, the battalion commander is operating independently and shifts the hit onto the T-64 unit. The morale check on the remaining T-64 company, which the unit passed, becomes irrelevant in game terms.

Victory as the Soviets exert uncontested control over an objective. 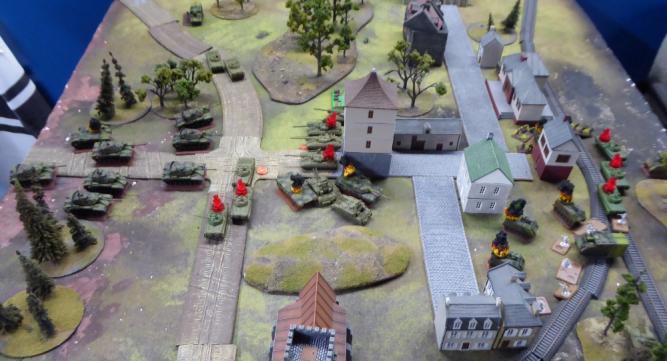 Overview of the battlefield at the end of Turn 4. 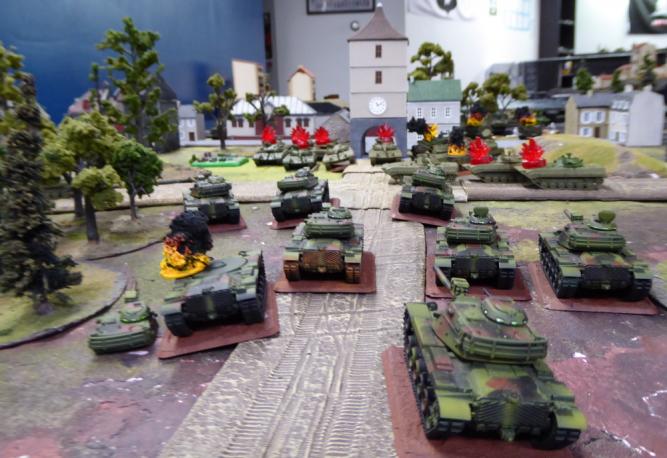 A view from the loosing side. Seen in background are the victor's tanks (mostly in flames).

The American player quite logically wanted to exploit his considerable advantage in night fighting to overrun an objective before daylight and concentrated all his units to do so, deploying forward using the Spearhead rule. A risk but a calculated one. Maneuvering forward on Turn 1 for an overrun on Turn 2 in urban terrain, he elected to not shoot most of his units, forcing the Soviet player roll for line of sight on his vulnerable mounted infantry.

The Soviet player exploited a tactical opening when the Abrams unit pushed far enough forward that their 14" tactical move gave his T-64s opportunity for flank shots. At the same time, he decided to commit all his armor on a dash for one or both American objectives. The downside risk was that Soviet x American night combat, even at very short range, always places the Soviet player at a disadvantage. Payback was immediate when a BMP-2 unit evaporated due to return fire and bad morale without doing much damage. The Soviet player might have been in real trouble here although his intact T-64 companies could have moved to contest the Soviet objective rather advancing on an American one if required. Good defensive dice meant the Soviet player didn't have to make that choice and indeed the game was over but for the reinforcements. Luck smiled on the American player, with two successful reinforcement rolls for three dice thrown. His one tactical mistake in the end game was on trying to preserve his M-60 units from flank shots instead of pushing at least one unit onto his objective. That meant that only one Soviet tank had to survive frontal fire; in the event two did so. Had his shooting been better, there was a reasonable chance that his M-60s could have rolled over one of the weakly defended Soviet objectives in the next turn or two, since the Soviet player had yet to see his first reinforcement and was down to two tanks and 3 BMP-2s at the start of Turn 4 (plus three Storms with a bad attitude and a hilltop position nowhere near the key objective). But the Soviets, by this point, were threatening a second objective, which complicated matters.