Two Drunks in a Zoo

As he watched the mechanics, Col. Vladimir Brusilov reflected that a punishment assignment to the motor-pool when he was a green lieutenant was now a rather fond memory. It seemed ironic somehow. The pause in operations had allowed the logistics people a chance to catch up to the front echelon and, for a wonder, some replacement engines had appeared for the T-64s. The mechanics were operating in a series of warehouses in an industrial park with the combat forces spread out in some requestioned apartments and business nearby. The unwelcome attentions of NATO aircraft had made camouflage easier to enforce and the officers were not letting up on that aspect of discipline in the slightest although the troops were otherwise being given a rest. The civilians had largely fled and the soldiers had liberated an astonishing amount of loot and a fair amount of alcohol and luxury foodstuffs. The alcohol would disappear in due course but Busilov wondered just how the troops thought they were going to get the electronics home and what they would do with them when they did.

A messenger found him with an unwelcome reminder that the war was far from over. An American force in unknown strength was headed his direction, threatening to cut the line of communications that he was, in theory, posted to protect. At least no leave of any sort had been granted and rounding up the troops, drunk or sober, wouldn't take too long. The scratch force of East Germans and and Soviets needed to intercept the attack at... Brusilov though he had a passable reading knowledge of German, but the map notation wasn't making much sense. "Tiergarten" was zoo, but what did the rest mean? He finally resorted to calling in the East German liaison officer and after some difficulty with the man's less than fluent Russian, they arrived at "The Frankfort Zoo Safari Experience Park". Brusilov decided it didn't matter, what mattered was engaging the Americans before darkness fell and their superior night vision equipment came into play. He changed his mind when his command vehicle entered the gate and the lead recon elements reported setting up in the first palm forest west of the mosque, just up from the camel herd...

Using the Team Yankee More Missions rules, both sides selected attack and the generated scenario was Free for All. The American player won they dice-off for attacker and rolled Dusk on the Random Time of Day chart.

For the following description, the Soviet orientation is always used. Hence "left flank" means the Soviet left and the American right.

The available game board modeled desert with some ridges, lots of buildings and some palm groves. Perfect for the Afrika Korps, rather less realistic for northern Europe. We agreed that the wadis required cross checks and except for the inward facing edges of the center-right ridges, slopes were gentle. The near-vertical slopes of the inner ridges were impassible.

Objectives went down symmetrically, one each flank and one on each side for a total of four.

Only the Soviet player had artillery and his ranged-in marker went down near the right flank objective on the American side.

The Americans advanced a scout unit of the left flank on their first deployment, the Soviets first play put an advanced scout unit on the right. The Soviet player had a much larger number of units, so the American player was fully deployed before the first Soviet tank deployed. The American covered both objectives with infantry, deployed a mixed force in the center and an M60 unit on the far left flank. The Soviet player put infantry on each objective, covered the left objective with light armor (BRDM-2s, BMP-2s and Spandrels), covered the center with more light armor and a Carnation battery and threw down every last tank, most of the AA and two scout units on the right, with the tanks advanced as far as allowed around the spearhead units. The right flank infantry poised on the base line and the Storm AT launchers used a hill to fire down the line of advance. 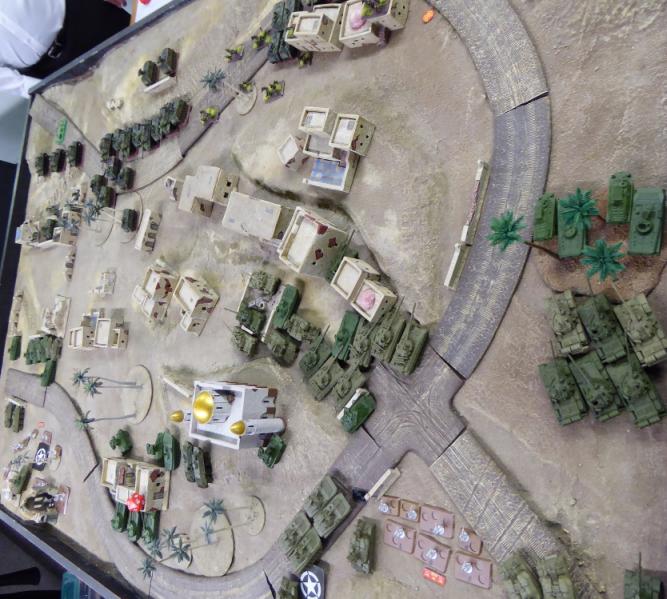 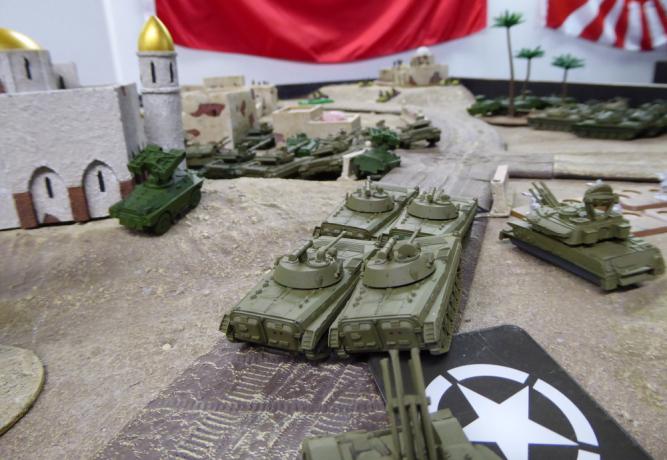 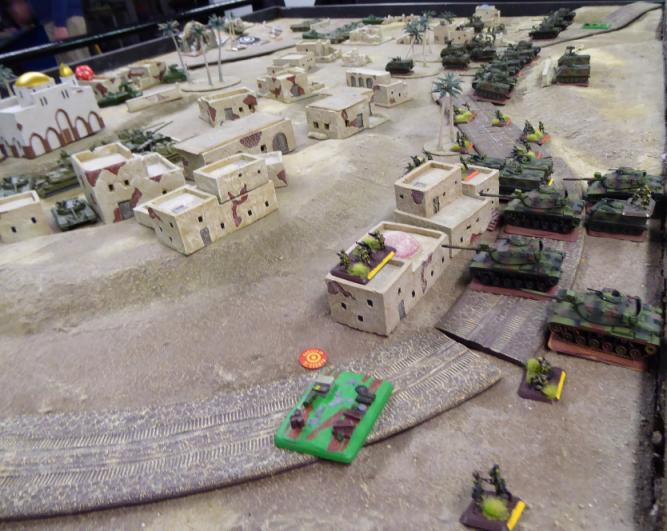 The Americans prepare to receive. Objective in the foreground is the Soviet target.

The American player went first, rolled for planes and got them [wrong, not allowed under the Meeting Engagement rule but both players forget the rule applied]. The planes rolled in on the left flank armor, lost an A-10 to ground fire and then decimated their target. The M60s started to split their attentions with the left flank units staying there and the center units moving to flank the Soviet advance on the right. Notably, the M60s killed two T-55AM2s behind cover in the center with their remaining comrade fleeing the field. This put both flanks at risk. 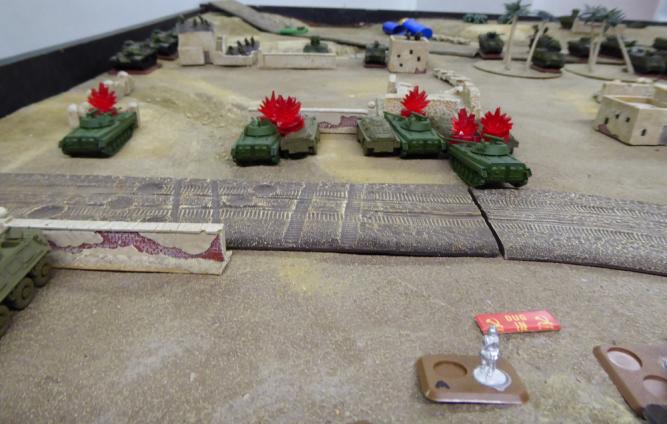 An East German T-55 unit passed the blitz move test then moved tactically to within assault range of the infantry defending the right flank objective The T-64 companies climbed the ridge to shoot up the units defending the objective. Artillery fire pinned the infantry defending the right hand objective then a T-55 assault forced the US infantry off the objective. A moving T-55 managed to bag an M60 from the front despite the slow firing penalty. With the exception of some AA fire, this was THE Soviet achievement of the night in terms of dice skill. A BMP-2 unit and Shilka section moved from the right to center to cover the left flank objective using a handy road. 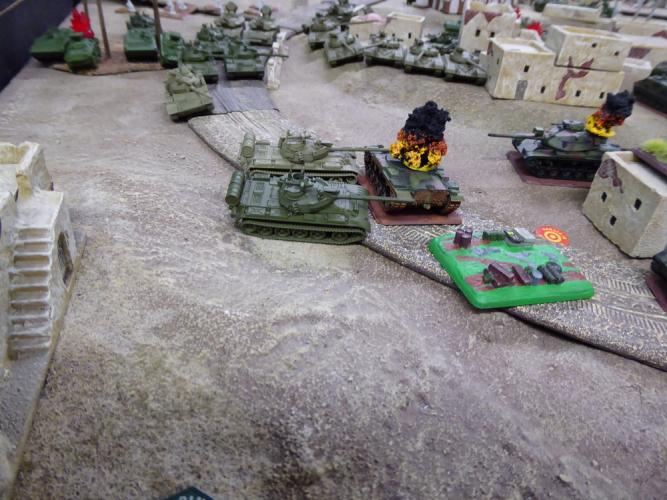 East German allies reach the objective but Americans are still in contention range.

No air support. Infantry starts to advance on the left flank, while additional center units move to the right flank to counter the Soviet surge there.

Artillery switches from the right flank to the advancing infantry on the left despite the loss of the observer and pins the US infantry. Anther tank assault is pushed back by US infantry on the right. A volley of 3 T-64s at an M113 with a company commander yields a bail. Things aren't going exactly as planned.

Air support arrives (3 x A-10s left) but another A-10 goes down. The relieving infantry is getting in position to cover the right flank objective but the M60s are a spent force on the right flank. One M60 starts towards the lightly defended Soviet center.

Daylight continues (first roll). The lone M60 in the center continues a charmed life despite the attentions of a T-64, a BMP-2 scout, two Spandrels and three Carnations firing over open sights. An assault on the dug-in infantry by a two T-55s and two BMP-1 scouts succeeds but the T-55 unit routes.

Daylight continues (second roll). Planes again, hitting the right flank. They are shot down by the Soviet infantry's shoulder fired missiles, ending that threat completely. The US is running out of tanks but has successfully dug in infantry to continue to contest the right hand objective. US progress on the left is negligible because the infantry is still pinned.

Daylight continues (third roll). Closing time at Legions is looming and the Soviet player can't win this turn even if he breaks a formation so we called it a night without playing the defender's move. Game scores as a draw.

We messed up the Meeting Engagement rule and the American player should not have had planes on the first turn nor certain missile shots. However the American player activated aircraft first during the shooting phase which meant the entire Soviet AA complement had a chance to shoot without hindrance. Since the first air attack was on the left, which stood off the American advance for the rest of the game with minor reinforcements, the overall effect on the battle was fairly small.

The T-64 x M60A3 engagement was a first for the Soviet player. In some important respects the T-64 is superior. It's tactical move is longer. It can bounce hits from the M60 at close range (50% chance) while the American only can do so at long range (16% chance). The T-64 is invulnerable to LAW fire in all attitudes. Three M60A3 models are 12 points, three Soviet T-64s are 13 points. The American tank shoots faster, is harder to hit and has better numbers for assaults but worse numbers for morale and remounts. While the M60 out-ranges the T-64, the T-64 can add missiles which out-range the American tank by an equal margin (if the Soviet player wishes to pay of course). Unlike the T-72M, the points paid seem to reflect general utility of the tank and not just against M60s.

Overall, the American player's superior dice compensated for the penalty of having to deploy to cover all eventualities and then maneuver. The fly in the ointment was an American inability to unpin infantry once pinned. The basic Soviet plan of massive, early pressure on the right flank to win before darkness forced the American player to throw units in piecemeal to stem the flood and he couldn't focus on overrunning the weak Soviet left flank. On the other hand, the Soviet player failed to clear the objective before reinforcements arrived and the right flank advance was along a fairly narrow front due to the presence of buildings and impassible slopes which made it hard to intercept units moving from center to right. The Soviet player rolled well enough to have hope but never had a run of good throws making a basically sound plan unfruitful.