100 points – British Mech Infantry Company/Recce Squadron vs. Motorized Rifle Battalion
In a Meeting Engagement in the German countryside, a force of Soviet mounted infantry, supported by T-72s, Shilkas, Gophers, and Grails ran smack into a force of British infantry, supported by Chieftains, Abbots, and light Scorpion tanks, with the usual spam of British AT missiles and an appearance by the RAF.
British Abbots, Rapiers, and Milan-armed Spartans took cover in the woods, establishing a firebase covering the Soviet objective at the end of the long ridgeline. A platoon of infantry dug in around each Soviet objective, and Striker vehicles took cover in crop fields. The Chieftains had no place for cover, but were placed opposite the T-72s. Scorpions took up screening positions, hoping to get in one good round of shooting at the BMP horde before they succumbed to enemy fire.
The British had the first half of the turn, so no air support to start with. The Abbots ranged in on the near BMP company, but only destroyed one BMP and one rifle team. The wave of 8 Scorpions in the crop fields completely whiffed, missing every single shot on the BMPs.
The one bright spot on the British side of the turn were the Scorpions in the woods, knocking out 3 BMPS at once. The Mortars joined in, killing another rifle team by bombardment. No Soviet commander worth his vodka is cautious, and Glenn is one of the most aggressive. The infantry from the missed BMPs dismounted and charged forward, hoping to exterminate the recon screen in one blow. It’s hard to fit all those guys together for an assault in Team Yankee, but Glenn did it.Glenn’s shooting dice proved to be almost as cold as mine in the early stages, as two Scorpions were destroyed and one bailed out. This left five tanks active, with enough MG fire to turn back the infantry assault. Perhaps a smoke barrage would have increased the infantry’s chances, but we’ll never know…the Scorpion MGs wiped out 3-4 stands of infantry. With the infantry focused on the Scorpions, the BMPs headed for the Scimitars, who had remained Gone to Ground in the first turn. Unfortunately for the British, these BMP gunners knew their business and wiped out all 4 Scimitars. The T-72s also managed to destroy a Chieftain and bail out the other two.
On the second British turn, the Harriers came in, and with the Chieftains basically gone, I was counting on them to kill off the Soviet tanks. I left the airstrike for last, hoping to reduce the enemy AA fire with my artillery. The mortars managed to pin one Gremlin team, and the Abbots bailed out a Gopher. The Gopher managed to kill one Harrier, but the other three made it to bomb their targets.
The Harriers killed one and bailed two tanks, but that was it, no morale check for this platoon. The Chieftains refused to get back in their tanks, but survived another round of Soviet firing. Combined fire from Milans, Strikers and Scorpions killed off several BMPs, but passed their morale check to stay on the field.With time running out, the Soviet commander threw his last infantry into a frontal assault. Shilkas moved forward to take out the British APCs, reducing defensive fire. But the veteran British infantry stood their ground, turning back the enemy infantry assault.The Soviets had managed to destroy a Scimitar platoon and the mortar platoon, giving them two Victory Points for a total of 3 points. The British destroyed the T-72 platoon, giving them a total of 2 points.
Although we weren’t able to fight to a conclusion, I always appreciate playing Glenn. He’s a generous opponent, and a good tactician. 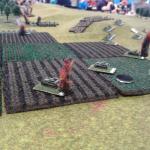 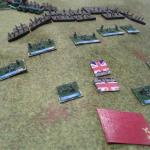 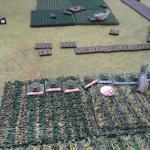 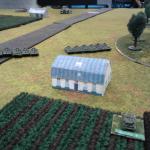 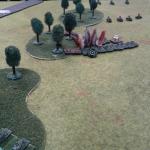 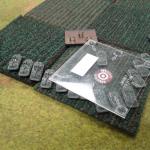