One platoon with the Captain had advanced at speed when the Division Recon elements had radioed back about evidence of Ivan moving troops and light armour around the area and another desperate firefight with the broken Russians from privious enguagements who where falling back to link up with other Red forces. It was truly a game of cat and mouse out here and Anders wasn’t sure if he was the cat or the mouse.

When Captain Anders arrived at the meeting point he see that the Humvees of the recon platoons bore the scars of light arms fire earlier that morning. He had nothing but respect for these boys they pressed hard for long hours of the day scouting, fighting, distractions, and generally causing problems for Ivan.

He met Captain Knight and exchanged brief greetings before knight got a map out and put it over the bonnet of his humvee. A private appeared and gave them both a cup of joe and was excused. Andersen pulled out his Marlboros out and offered one to knight who declined.

They discussed the situation and the terrain ahead but Anders wanted a closer look. So they mounted up and headed out.

“Contact north east, Ivan has dug in, move all support elements up, and request air support”

The order was brief and short as all hell broke lose, missiles both American and Russian started to streak back and forth across the farm and valley. The US Tow missiles reaped a few BMP kills before the return barrage scattered around them. The infantry rushed forwards to take the crossroads and there was no sign of any other Russians. They seemed to be facing off against one lone company of infantry and their tracks.

The familiar sound of rotors announced the arrival of the cobras darting between the hill tops as they got into position and lined up their targets. The missiles continued to fly as more BMP’s became smoking wrecks. A few of the Humvees moved up to a field down the road from the crossroads to cover them from a soviet advance. It was a precaution more than anything.

The return missile barrage from the divers scored a singe kill of a humvee. Before missiles lifted up from behind the trees streaking towards the cobras but luckily the hunter killers speed and manoeuvrability meant the missiles impacted wildly into the hilltop and tree line.

Soon the M163 VAD’s arrived to cover the skies of any threat. If more elements of the US force arrived before Russian reinforcements they could lock down the area and hold it for a while. Foxholes where dug and missiles continued to fly taking down a few more BMP’s. then the cobras popped up to take shots at the russian anti air sitting behind the the trees. But not before the AA claimed one of the cobras as it fell from the skies in a burning fireball. But the cobras managed to claim several direct hits avenging their fallen brother.

Still no sign of Russian reinforcements and another Humvee exploded in a fireball.

Another infantry platoon arrives and starts moving to secure the area to the rear of the main force. Still no sign of Russian reinforcements nagged at captain Anders but maybe Ivan was losing stomach for the fight. More missiles and more BMP’s fall

Some Humvees pull back there TOW launchers destroyed and .50 and greadelaunchers not much use at the minuet. The cobras take more shots at the AA claiming another but missile from the Russian infantry turns another cobra into a fireball. The remaining cobras duck back down not willing to risk losing airframe unless absolutely necessary. M901 ITV’s in position and launch missiles into the dug in infantry but impact the ground around the dug in infantry.

Russian reinforcements arrive to the south, south west and rattle the M113’s and splinter trees around the infantry covering the south.

But it was too little too late. With the loss of most of their light armour, hardly denying the US force and what little Russian reinforcements came arriving too late to be of use the Russians began to pull back leaving the victorious Americans cheering and throwing insults at the retreating Russians.

Summery:
Leipzig counterattack, 50points US vs Russians.
Lee had possibly the worst luck with his reserves I have ever seen but as always it’s a pleasure to play him on his lovely collection of scenery. 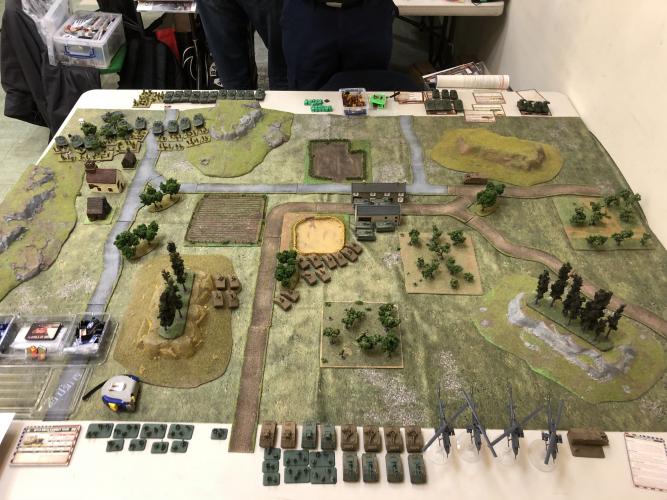 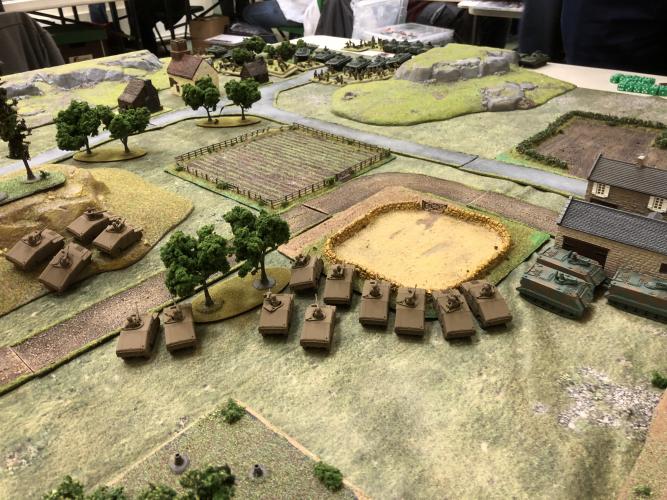 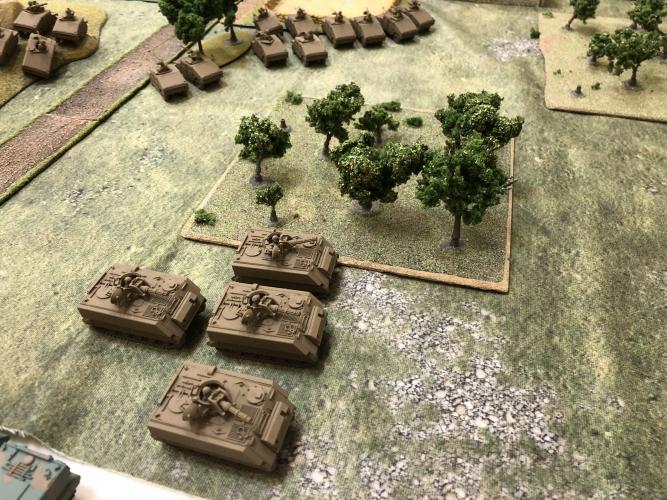 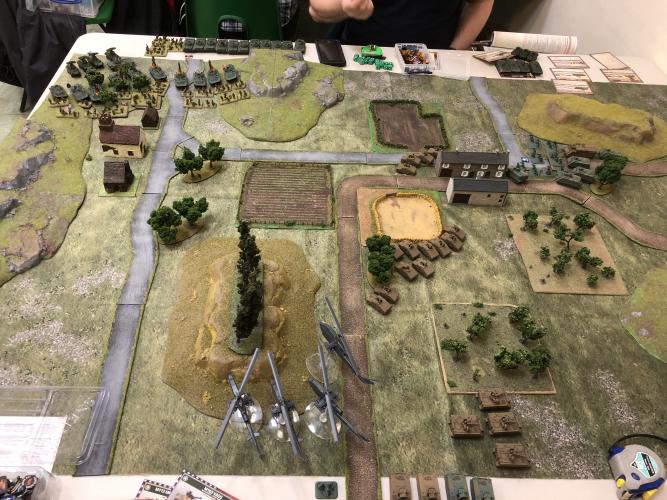 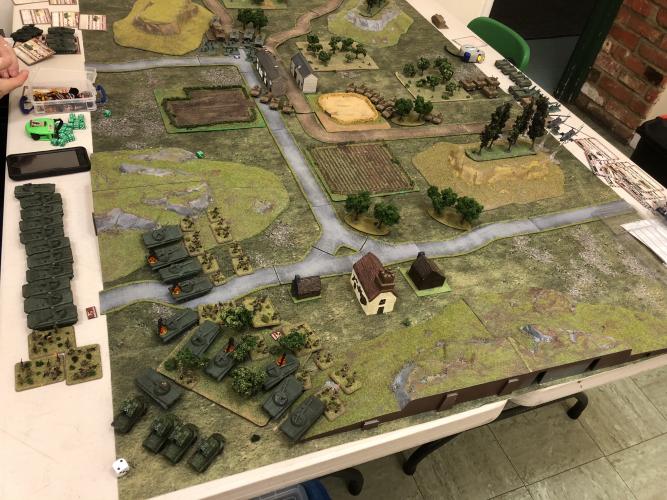 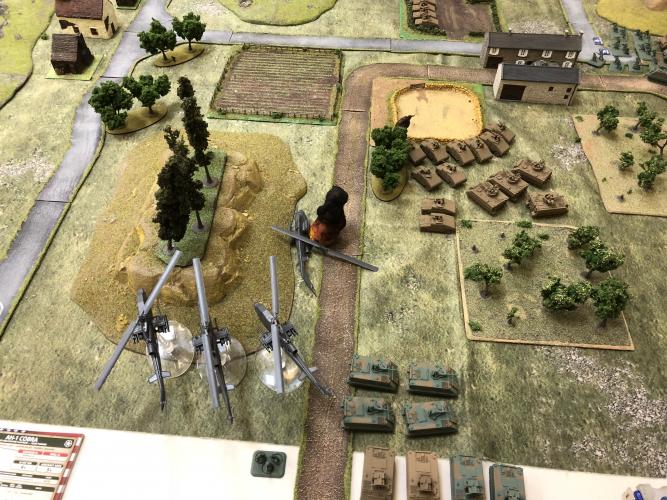 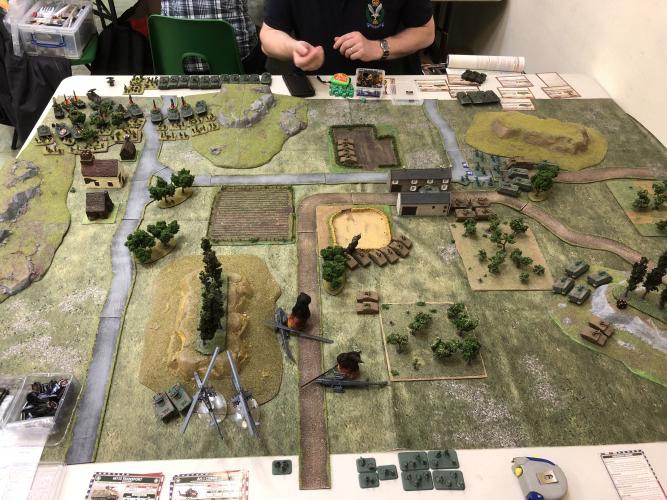 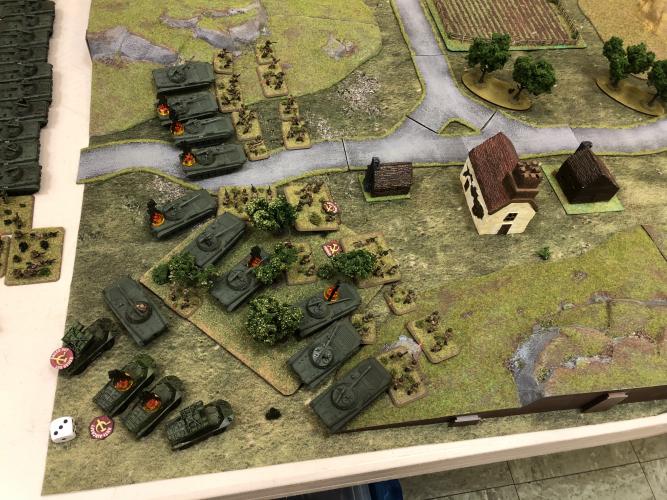 Another of the Russian casualties 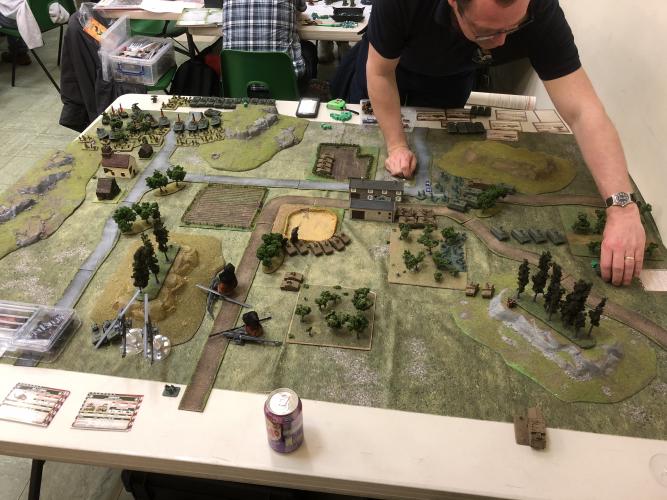 Lee starts to place down his reinforcements 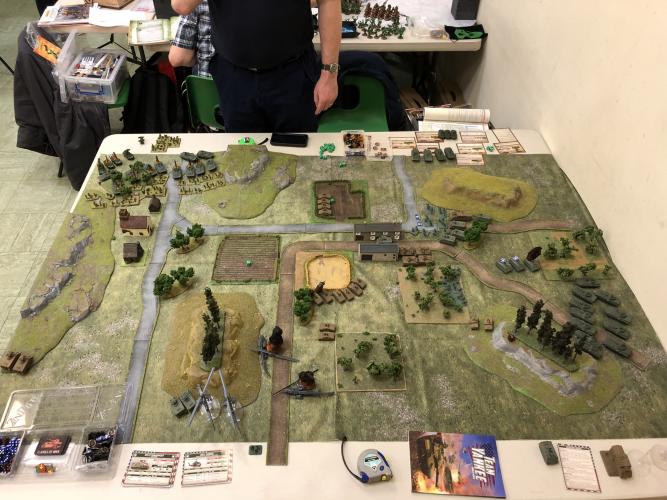 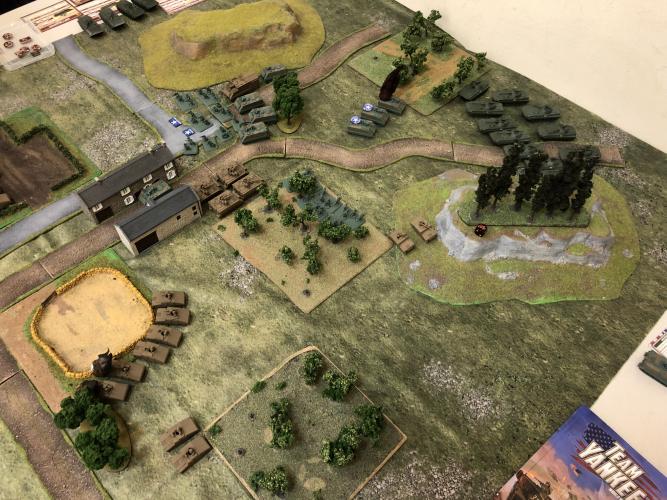 Even encircled the US prove to much for the Russian reinforcements. 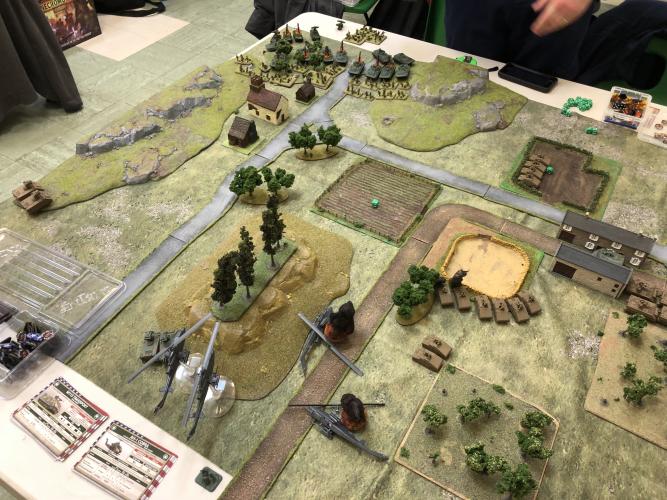 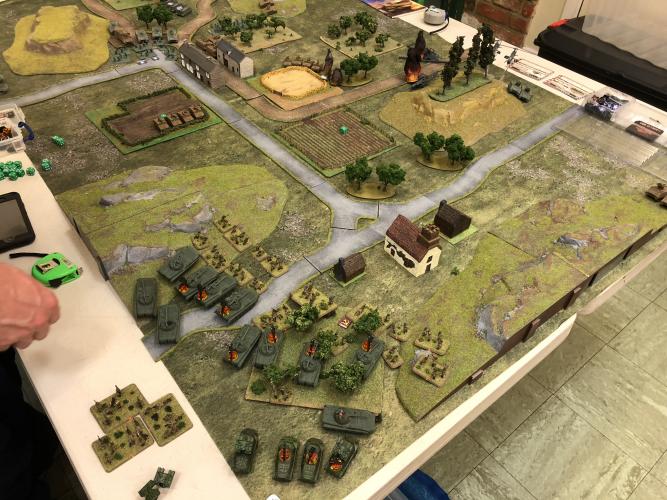 Battered and walking home. Russian infantry unscathed but their tracks took a beating.