Captain Stones observed the bridge through his binoculars from the discomfort of his foxhole. He could hear Kwolski and Burns moaning about the missing supplies and armour from the complet balls up of the company’s last minuet deployment to assist the USMC in Hamburg. “Knock it on the head boys save your energy for Ivan” they both fell silent before replying “yes sir”

Captain stones threw them a side long glance before resuming his observation of the bridge and surrounding area. Two platoons and some M901 ITV’s would not be enough to hold this bridge if Ivan came rolling through.

Sometime after 14:30 a small reccon company came hammering down the road in their HMMWV’s the men manning the guns looked tired and in need of rest. After a short exchange over the radio he found out that Ivan where massing 5 clicks to the east and the recon company had brief exchanges with them all morning.

After frantic exchanges over radio with battalion he found out that the rest of his company where on the way with an unestimated eta and that artillery support was not avaliabe and neither was fast air. Although a AH-1 Cobra platoon would be airborne ASAP.

Stones made sure the recon company got some hot food and coffee before getting them to spread out to the east, south east, and south to cover the areas his men couldn’t.

Then sometime around 19:30 Ivan came rolling into sight with the main bulk for the force ocupying the woods to the south east with a recon element and T-64’s directly south. The exchange was intense with HMMWV TOW,s and the ITV’s raining missile after missile into soviet armour both heavy and light. A few humvees where hit in the return fire but most of the soviet rounds splintered into the tree lines. A few unlucky ones where hit so the humvees pulled back before reappearing to return fire.

Captain Stones issued over the company net that to hold on a little longer for reinforcements to arrive.

More Humvees became burning wrecks their crew scattered or worse then the unmistakeable sound of M60 Pattons rolled in from the north as and unleashed their 105mm cannons on the soviet armour leaving all but one T64 standing.

Shortly after as night fell a horde of Russian BMP2’s came at an unexpected angle to the south west behind the south most humvee platoon taking them by surprise.

Then thudding of helicopter blades passed over from the west as 4 AH-1 Covras arrived on station to give fire support as the M60’s demolished the last T64 in a horrendous fireball.

This last act made the soviet advance falter and victory was secured by the good old US army.

This game was really fun to play and came right down to the wire. Thanks to Lee Wood for another great game and for providing the fantastic scenery we play over. 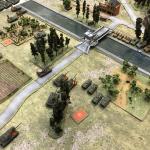 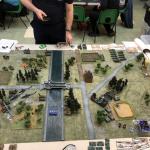 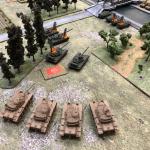 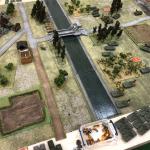 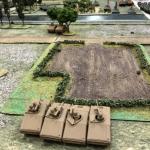 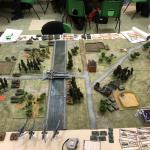 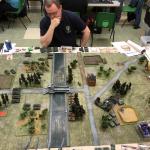 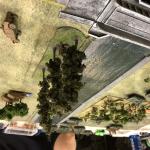 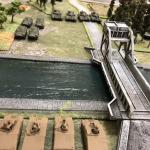 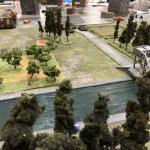 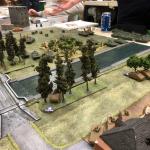 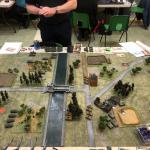