What a crap detail. They had been tasked with defending the supply lines around Leipzig. Captain Cody looked through his binoculars and see that the Soviets also digging in on the other side of the village.

Early that morning that exchange small arms fire with Russian forces luckily there were no casualties. Talk to Cody and ordered the armour move up to the forward positions ready to engage.

Then all hell broke loose as both the Russians and the Americans open fire for each other. The rate of ammo expenditure was high but they had to lay down suppressing fire to hold off the Russians long enough reinforcements to arrive. Then a small splinter of the Russian force moved across the bridge to the other side of the stream hoping to make a push down the east flank. Cody gon on the radio and ordered the M60’s to move forward and engage.

The M60 tranks had great success with picking off light armour but where soon forced to cross the river to get out of retaliating fire from the Russian forces. Then without further warning the Russian forces surged towards the US lines. Russian helicopters were spotted landing on the far side of Easten woods. M163’s arrived but not before the hinds could deploy infantry but still carved chunks out of the hinds as they flew a supporting attack run.

The US forces managed to hold long enough to stop the Russian offensive from becoming a real threat.

Unfortunately time was against us and we could not complete the match. But fun was had bay all. 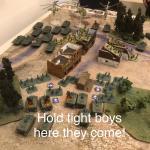 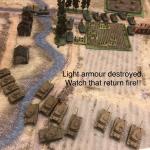 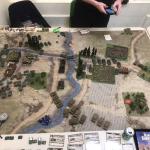 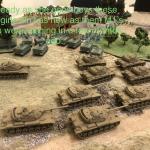 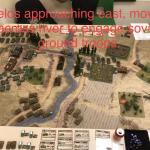 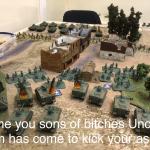 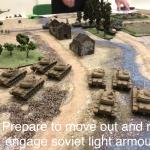 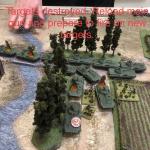 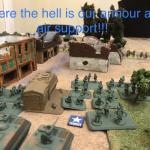 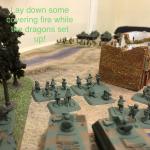 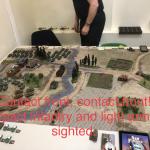 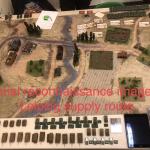