With the British remaining stubborn in their defence of Hannover Soviet forces are carrying out a number of spoiling attacks as reinforcements enter the AOR. A T-64 Battalion (Bn), supported by a BTR 60 Motor Rifle Company (Coy), have been tasked with attacking a US armoured combat team that is securing the British southern flank. The Soviet commander elects to attack in daylight.

TURN 1
SOVIET
The Soviets fail their first reserve roll and forget about the Driving Force rule. 1st Tank Coy dashes into the open ground that is being covered by a pair of Cobra attack helicopters. On the Soviet left flank the Storm platoon engages US M1IP HQ section with no effect. The ZSU-23-4 platoon finds the Cobras to be out of range.

US
The HQ section moves forward to engage the Soviet T-64 Coy. On the US right flank the 1st M1IP platoon engages the Storm platoon, killing 2 vehicles with the third passing it’s morale check. The Cobra’s engage the T-64s with 2 ITOW missiles finding their mark but only 1 T-64 is destroyed. 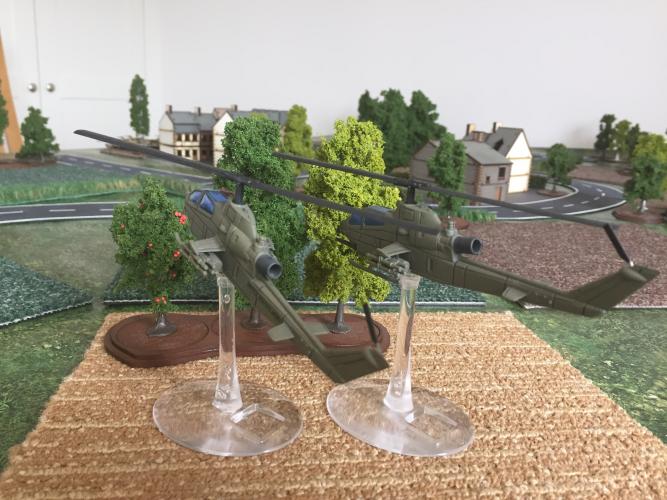 TURN 2
SOVIET
The Soviet commander gets 2 reserve rolls and deploys the 2nd T-64 Coy on the left flank to counter the 1st M1IP platoon and the Motor Rifle Inf take the centre ground. The 1st T-64 Coy pushed forward, now supported by the two ZSU-23-4s. The Soviet Bn commander moves to a battle position in an attempt to engage the US HQ section. The ZSU-23-4s engage the Cobras and down one, the wingman fails his morale check and departs the field. An early success for the Soviets. The 1st T-64 Coy now engages the US HQ section and hits the 2IC tank, the shot penetrates but a roll of a 1 for the FPO check leads only to a bail. The remaining Storm vehicle, pushing his luck, reengages the US tanks but again has no effect. The newly arrived 2nd T-64 Coy engages the US M1IP platoon, now in cover, but only hits, and bounces, a single tank.

US
The bailed out 2IC remounts. 1st M1IP plt re-org in their woodline to engage the newly arrived T-64 Coy and the HQ tanks remain in their battle postions to slug it out with the 1st T-64 Coy. The US commander is confident in their men and equipment. On the US right flank the 1st Plt engages the Soviet tanks and in answer to the US commanders confidence they fire 6 rounds, hit with 5 which results in 3 kills and a bail. Good shooting from the US tankers. The HQ sect also hits twice but can only bail a single T-64. The HQ sect then shoot and scoot back into cover. 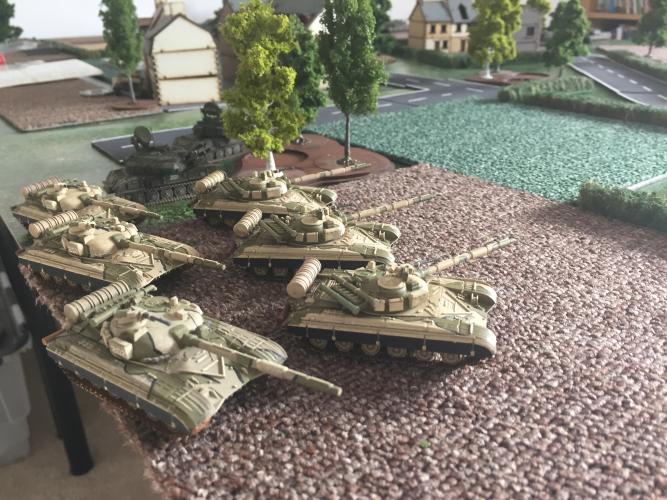 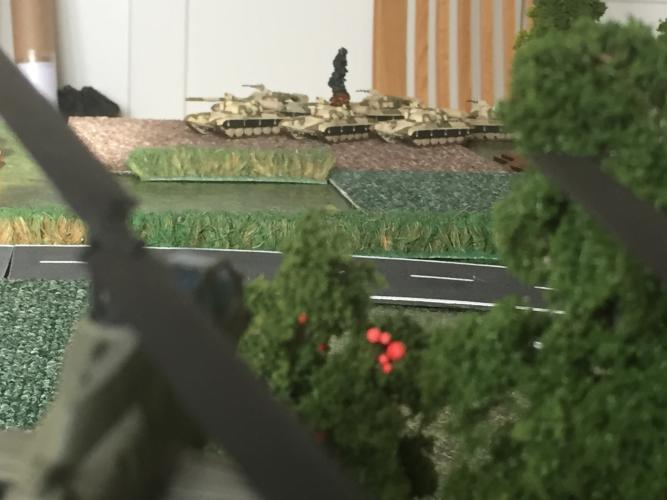 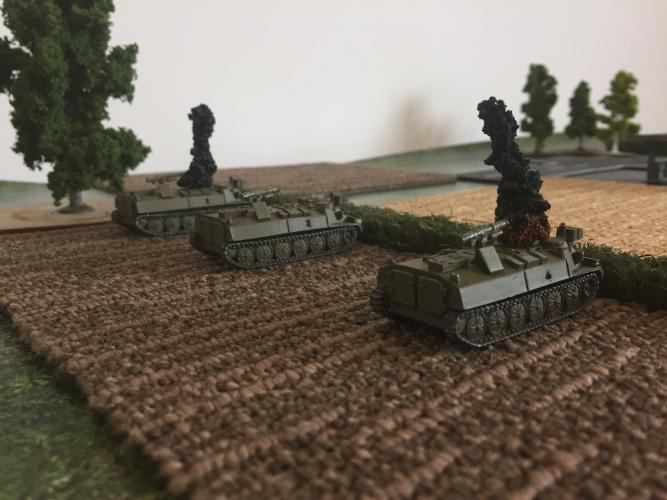 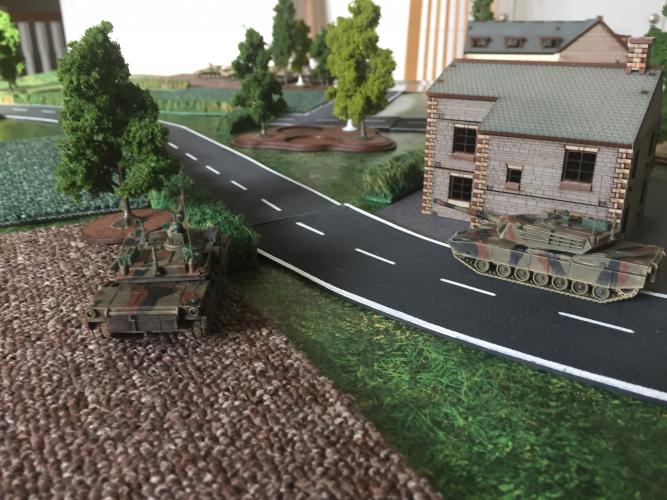 TURN 3
SOVIET
The Soviet commander has a single reserve roll but the Su-25 flight fails its arrival roll. 1st T-64 Coy has no choice but to push their advance but loses a tank crossing an obstacle, the ZSU-23-4s move into cover from any US tank fire. The BTR company moves forward, looking for cover from which to debus the infantry next turn. The 2nd T-64 Coy, or what’s left of it, moves out of the kill zone in an attempt to close with the US tanks. The 1st T-64 Coy engages the US HQ section and hits the CO who rolls a 6 for the armour save! The Soviet Commander fires an AT-8 at the US CO, who rolls a 5 armour save, with no effect. The Storm vehicle manages to get LOS to a VADS and dispatches it with a AT-6. The VADS fail the moral check and bug out, leaving the US with no dedicated air defence.

US
The US commander has no successful reserve rolls. 1st Plt reorgs in the woodline readying themselves for the remains of the Soviet T-64 Coy they have just malleted. The HQ sect moves back to cover the first objective. The CO and 2IC reengage the T-64s but fail to bail a tank. 1st plt, continuing their good shooting, manage to another round of 5 out of 6 shots on the beleaguered T-64 Coy and kill 2 out of the 3 remaining tanks. The survivor passes his moral check. Gutsy bastard. 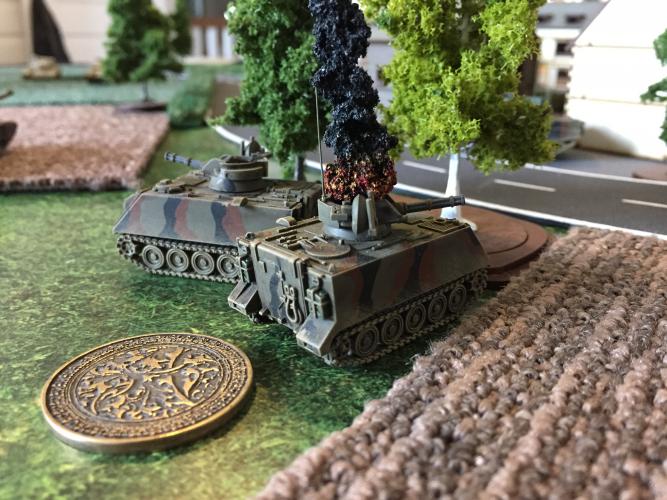 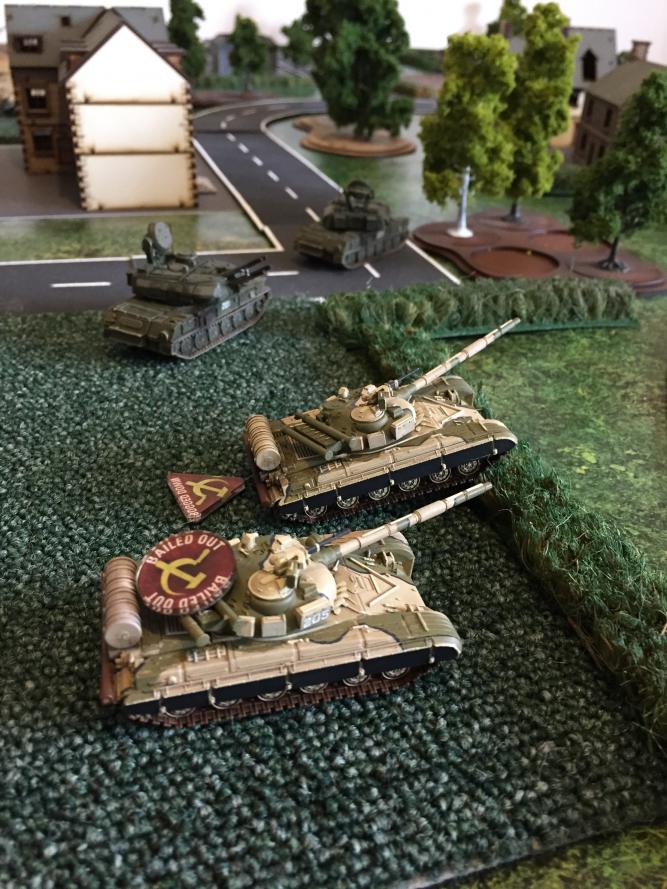 TURN 4
SOVIET
The Su-25 flight arrives and is instructed to engage the US HQ section. The Storm vehicle displaces across to the central village as the vehicle commander just remembered the 56 inch range of the weapon system. The T-64s of 1st Coy fail a cross check AND a remount to leave the Coy spread out. The infantry debus from their transports in the centre. The sole survivor of 2nd Coy moves his T-64 into cover, out of LOS of the US tanks. 1st Coy engages the US CO, hitting twice and penetrating with 1 shot. The US commander uses a Mistaken Target to transfer this to the 2IC, whose tank now burns in the village. Moments later a Kh-25 from the Su-25 flight obliterates the US CO tank.

US
A reserve roll brings on the 2nd M1IP platoon who, of course, have a roll that has them arrive flanking the T-64 Coy. They engage the Soviet tanks and effect 1 bail and 1 kill. This has the added effect of having the spread out T-64 Coy as being out of command and subject to a morale check. Fortunately, this is passed. The 1st M1IP platoon now switches to .50 and co-ax and light up the Soviet infantry, killing 3 stands and pinning the Company. 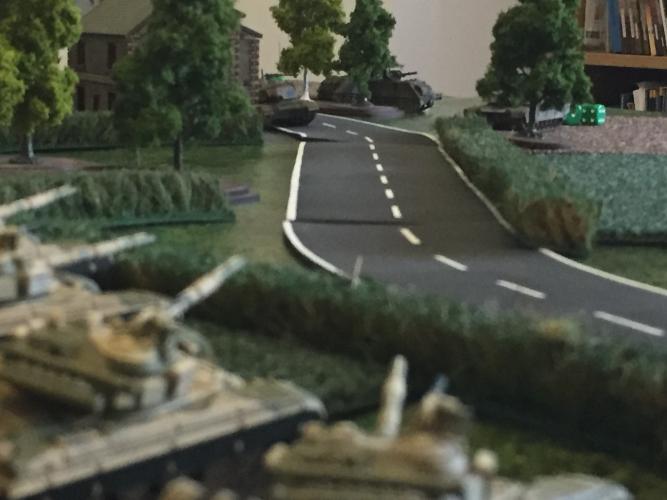 SOVIET
Strike aircraft roll is passed and the Su-25s roll back in. The bailed T-64s remount. The Soviet CO moves forward to join 1st Coy. The tanks of 1st Coy reform back in command and re-org to engage the newly arrived US tanks. The single Storm vehicle dashes across the ground to move to support the 1st Coy. The infantry rally and begin to move forward into the cover of the village. The lone tank of 2nd Coy breaks cover to face down 3 M1IPs but manages to only bail 1 tank. The 1st Coy T-64s manage to bail an M1IP from the newly arrived 2nd plt and the Su-25s kill a second but the Plt passes their morale check.

US
All US Tanks remount but no reserves are committed. The two remaining M1s of 2nd Plt now break cover to move towards the open objective but they turn to face the advancing Soviet tanks but both their hits bounce. 1st Plt fires 4 rounds at the single T-64 and miss with 3. The 1 hit is bounced with an armour save of 6! 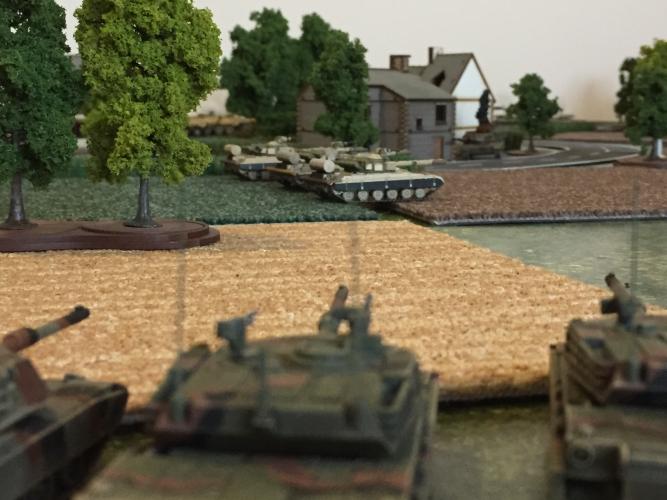 US reserves arrive to a great position 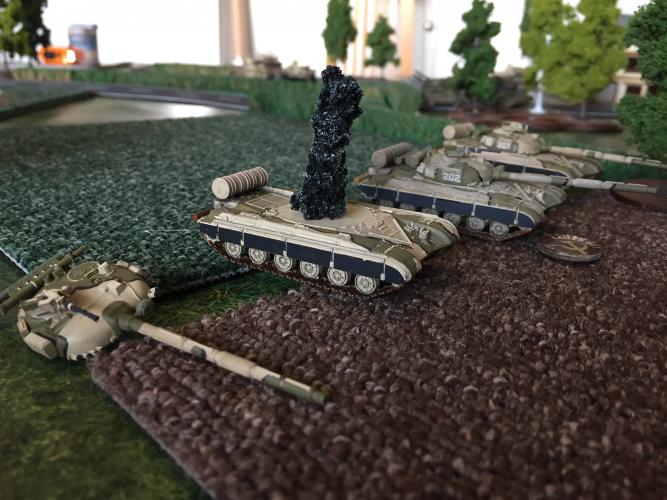 It could have been a lot worse 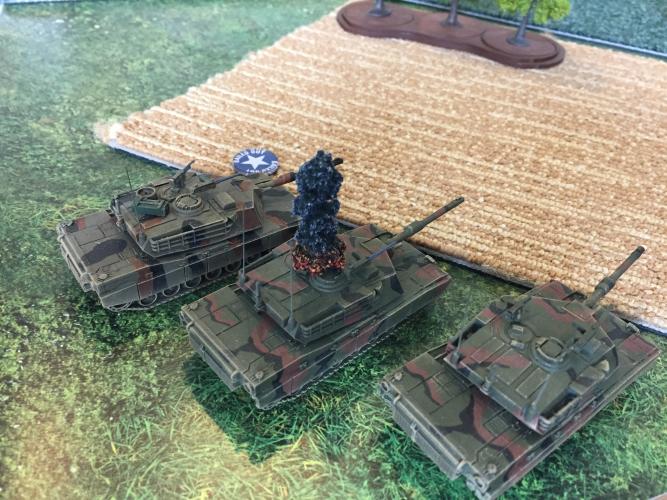 The M1IP is not invulnerable after all

TURN 6
SOVIET
The Su-25s are called away and do not appear this turn. The infantry move through the central village, approaching the burning remains of the US HQ sect. 1st Coy reorg to engage the US tanks now moving over open ground to the objective. The volley of 125mm fire kills 1 M1 and bails the second. The Plt fails its morale check and is destroyed.

At this point the game had to be called due to other real world constraints. The US hold 1 objective with a platoon of 3 M1’s, in cover, against a single (lucky) T-64. The Soviets are about to capture the second but have no more forces to commit. The US still has reserves, including A-10’s. We discussed and shook hands on a draw. Perhaps I could have forced a formation morale check but it was a hard fought and fun game. 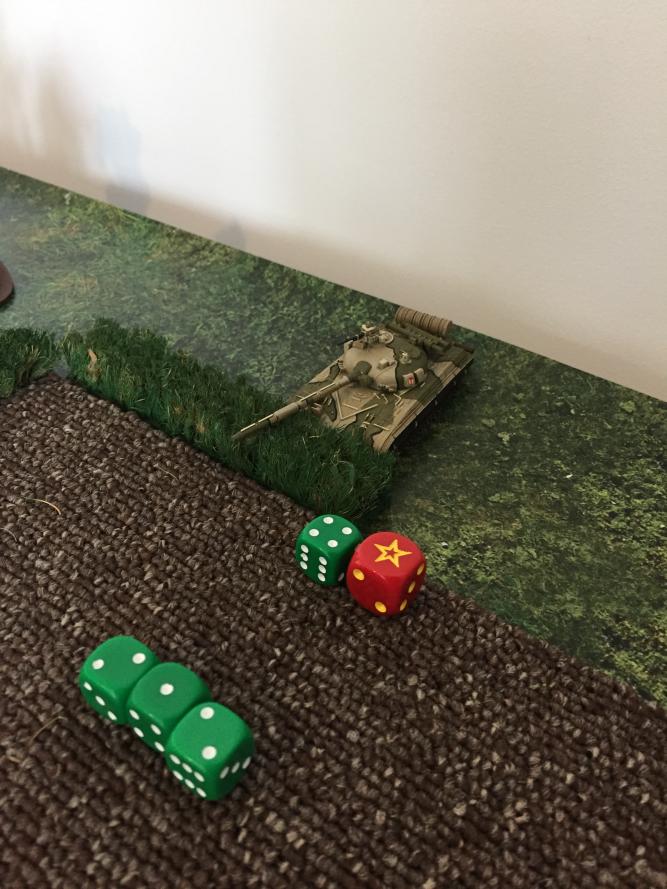 Officially the luckiest tank in the Group of Soviet Forces in Germany!