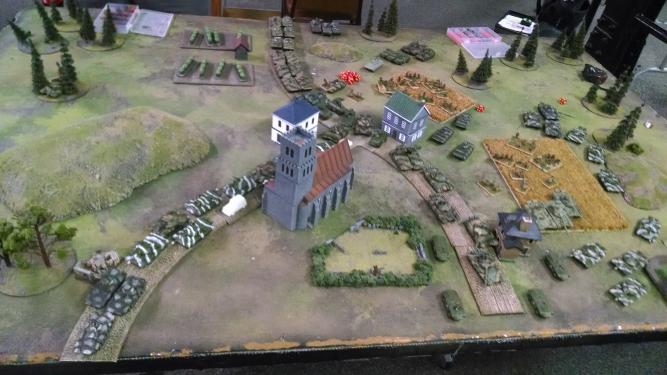 During the informal cease fire, the Division had been relieved in place at Gera, its point of furthest advance back to the Intra-German Border, and moved into reserve positions, becoming part of the 3rd East German Army. Like most PACT Armies, the 3rd had a mixed headquarters with command notionally residing in a German Generaloberst 'advised' by a Soviet General Armii. It was an uneasy command situation. Nothing pointed to that unease better than Nagten's current status. The nominal commander of the 10th had been relieved under a cloud after the Division withdrew without orders, contributing to the confused mess that allowed the NATO bandits to penetrate to the outskirts of Leipzig. The Division commander was still nominally in command, but apparently alive, thanks to marriage to the daughter of a high party official and having a brother in the Stasi. Reportedly he was in Berlin for 'consultations.' On the other hand, the Russian 'adviser' had been adamant that he not return to 3rd Army, and rumor had it that the KGB Field Police had orders to transport the officer to Moscow for a completely different kind of consultation.

Now the war was back on again, and NATO was moving to isolate Gera and potentially, drive northwest through Jena to connect over the Harz mountains to Hannover, as well as open a road to Berlin. Nagten nodded to himself. "3rd Armee wants us to blunt the Amis drive by defending along the Unstrutt River line. To hell with that. I hate paying for the same real estate twice. 10th Motosierte crosses the Unstrutt here at Trobsdorf where the 5th Grenzers report an intact bridge. Division engineers will support with a ribbon bridge. Get the Verloren Haufe on the road, then the engineers, then the Assault Rifle Regiment. Tank Regiment in third position. The other motor rifles will maneuver on flanking roads, prepared to intercept any Ami crossings. We'll defend the river line the way Napoleon preferred, from the opposite bank, and with any luck, the Verloren Haufe will be into this First Armored Division's support echelon by morning. 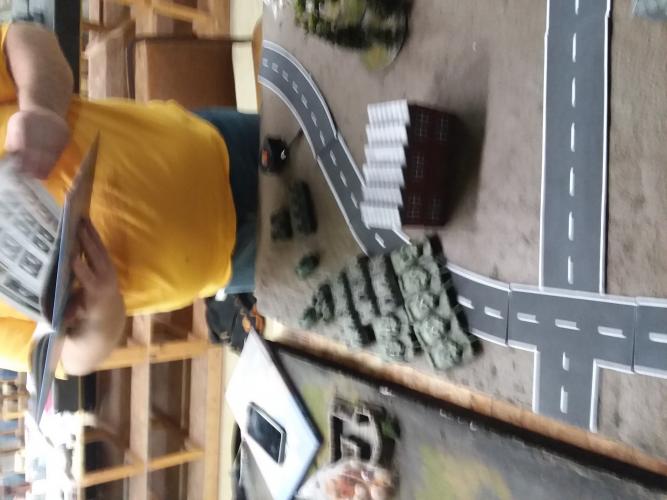 In the mechanism for our campaign, there were four games played Friday. 2 PACT attacks, two NATO attacks. I ended up with a NATO attack for my second game. Tim H was playing an American force with an Abrams company and a mechanized company, chose "ATTACK" as his battleplan and I matched with DEFENSE. Tim picked a Dawn Attack so the battle would start in darkness, and the die roll came up Bridgehead; hence the back story about Trobsdorf, in fact a crossing over the Unstrutt River.

What your are looking at his his setup, all of it, and it conveys most of his strategy. I had three T55 battalions, each with 7 T55s and 3 T72s, matched with one infantry company (small) with weapons attachments, flak, and recon. Two infantry companies were in BTR60s and each had Spigots. The other was in BMP1s. I used spearhead and a mass of trees on my right (northern) flank to position one BTR60 company well forward, put the other on the south end of the line, and put the BMP company's infantry in the center. In hindsight, I should have kept the entire company mounted in ambush; as it was the ambush was six BMP1s. My reasoning was that 6 BMPs could gut a mechanized company if I could see it and the infantry were window dressing. Not smart, but...The rest of the force was the rest of my non-tank units, with my 'one' air/armor unit being my Hinds. 9 tank units, one SA13 zug and the three battalion commanders were in reserve. I had a different list in mind for defensive scenarios, but neglected to print it out. You play the army you have not the one you want.

Tim took one look at fighting through a dug in infantry company in woods, 3 turns to daylight, immediate reinforcements, and attacked my left (southern) flank. It was a good plan. But no plan survives contact with the dice.

Tim's first move produced the battle of the McChicken. He slammed the Abrams ahead at full tactical speed, but because his infantry vehicles were behind 7 Abrams, he wasn't able to get close enough to assault with the M113s, and he chose to approach mounted. We discussed this, and I didn't convince him that a dismounted approach, infantry leading the tanks, might have paid dividends. Then the night rules came into play. Tim's 4-tank unit of Abrams rolled snake-eyes for its first night vision attempt, preventing it from shooting, save for one tank and Tim decided not to light up the platoon. The other rolls were equally abysmal, and between lack of fire and my saves, Tim narrowly pinned the BTR60 riders. They easily rolled off the pin. The night rules continued to gouge both sides as his VADs missed my Hinds and my Hinds missed his small Abrams platoon. Go figure. Proportionately, the night rules messed up Tim worse than me because I was mostly shooting at something that had already shot. Sure, everything he had effectively had cover, but almost everything I had was in cover, at least at first, and Tim produced an amazing number of 1s, 2s and 3s for target acquisition, usually in pairs.

The most decisive result of turn 1 was his first mechanized platoon had managed to shoot, and took fire from BMP-1s, BTR60s, and the infantry company's RPGs. Two M113s died and two bailed, and vehicles were abandoned in the subsequent morale check. To add insult to injury my 2S1s managed to shell the infantry forced out of dead vehicles killing one. 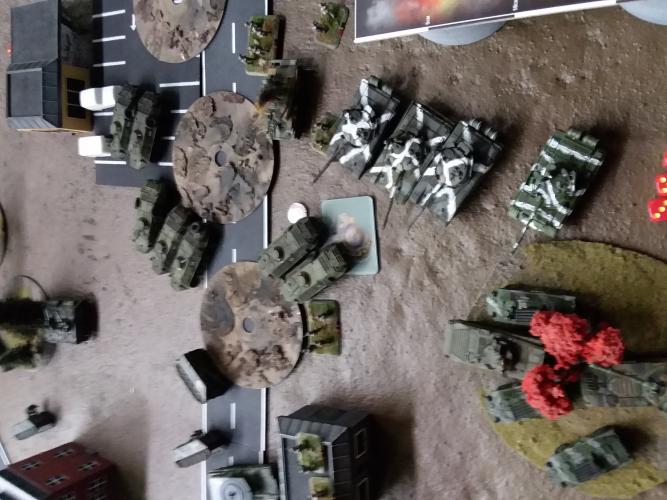 You'll see a better image of the fight for the McChicken further on. I took more pictures, but sadly my phone was fighting me and they were so fuzzy I couldn't use them. I rolled a '6' for reserves followed by a '3' and brought on the T72 company and battalion commander associated with the battalion under attack, and kept them out of the way of the onslaught. This is the position they took up on my turn 2 to shoot up the M113s that were harassing the BTR60 company.

Tim's turn 2 was a repeat of Turn 1, save for the fact that he dismounted his infantry, which temporarily gave my BTR company a breathing space. I had driven the 7 BTRs associated with company around the side of the McChicken in desperation and they had been part of the hail of fire that chewed up the M113s (some were hitting flank). Tim had to kill them to protect his infantry but managed only 4 hits. He cleverly used a smokescreen to keep my Spandrels from chipping away at his now exposed Abrams, but that didn't allow him to protect the infantry. Between my infantry company not being pinned, with an AGL-17s 9 dice waiting for him, and 12 defensive fire dice from the surviving BTRs, he elected not to assault. He managed to hit three recon BMPs killing two with his other 3 Abrams but the survivor passed morale.

I countered with the Hinds again, and also had a '5' plus '3' for reserves, followed by a '1'. This time the T72s from the unengaged BTR60 company got the nod, striking from behind. All good. Oops, forgot about the dice. Netted one Abrams with a backshot from a T72 and managed to get two hits out of the Hinds this time, but curses one was Gulag ammo and simply bailed the tank, and of course Tim passed morale. Managed to pin another infantry platoon with AGL and BTR fire 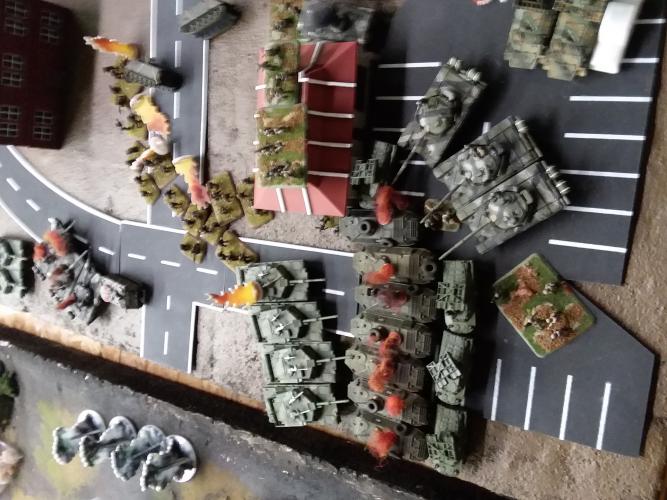 Tim still needed to break past the McChicken, and the combination of infantry dug into the parking lot and surviving BTR60s meant the BTRs had to go. His Abrams CO and the survivor of 2nd Platoon used the amazing speed of the Abrams to fly behind my flanking T72Ms and between that and a missile from an IOW, scratch a T72M platoon (that's them burning in the left corner of the picture). That, however, cost him tempo. Those two M1s would have to move again to be relevant. So Tim gunned down three BTR60s and a BMP1, netting a point. One of his ITVs nailed a ZSU, and its partner retired with honors, another point. With fire going in three directions my infantry still was not pinned, and still hadn't lost a stand, so Tim didn't try an assault.

My return of turn 3 was a mixed bag. I moved the SA9s to reinforce the traffic jam situation to buy me another turn of reinforcements. The Spandrels had a target on a '6' and managed to bag another M113, and along with fire from two T72s, 3 RPGs and 3 long shots from the Spigot team at the other end of the table both M113 transport platoons ended up on morale, as did an ITV platoon. Down side was my Hinds were finally shot down. An amazing number of dice thrown at two VADs in the open, no effect.

The AGL19 continued yeoman's work, trimming off another infantry stand in front of the McChicken. In contrast the Spigot team in the McChicken continued its lackluster existence.

Turn 4...Tim could see daylight, but it wasn't running room. He would be shooting at night, maybe, and virtually certain my Turn 4 would be daylight, 4 reinforcement dice, with a potential for a T55 unit plus BN CDR blitzing onto the table BEHIND him, and statistically certain to kill two Abrams if that happened, putting the Abrams company on bad morale. Not to mention frontal fire from Spigots, my ambush, 6 T72s...Tim decided to break off rather than gamble an outright slaughter against contesting an objective. 4-3 PACT 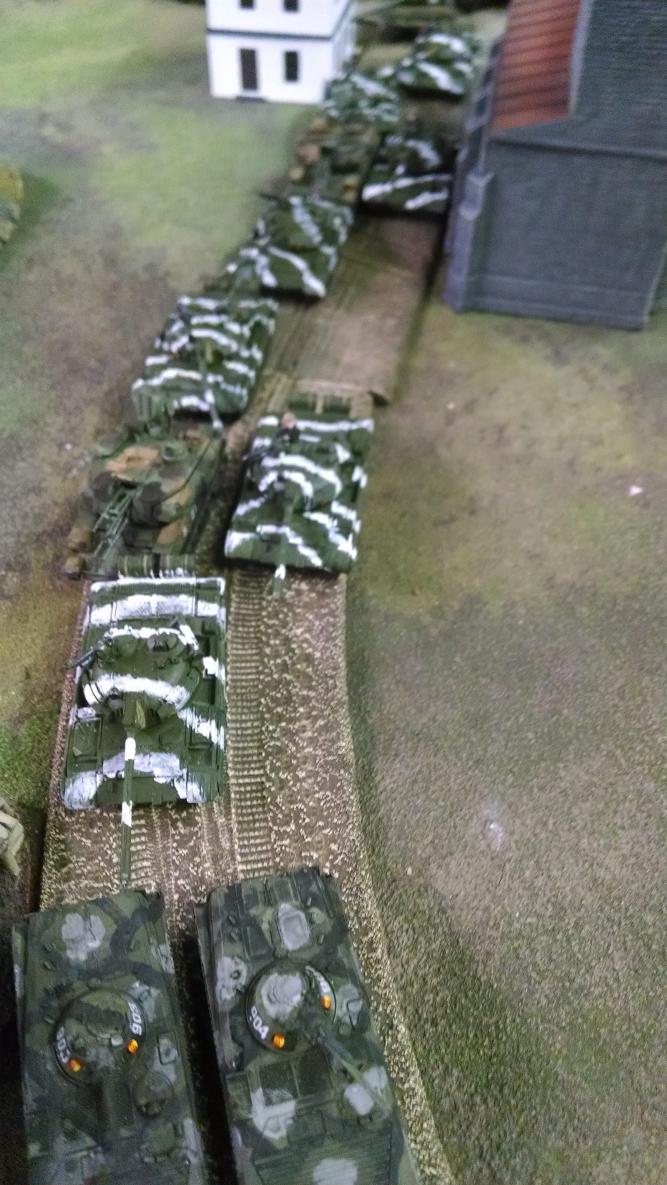 Aftermath
Generalmajor Nagten surveyed the carnage. The hasty fight in Trobsdorf had kept him from achieving norms but had caught the enemy looking the wrong way. The Verloren Haufe had exploded out of the bridgehead catching what appeared to be the enemy brigade trains lined up along K2253, waiting for orders. Apparently this had been a secondary crossing site; Schutzen Regiment 14 had repulsed an assault crossing at the same time to the east, where the Amis had apparently intended to use the piers of a damaged railroad bridge to force the river. This enemy brigade's momentum was broken; with any gluck at all he would destroy it. The enemy Abrams tanks were fast and heavily armored but had an enormous Achilles heel -fuel. And now his Verloren Haufe was in the enemy rear, and Panzer Regiment 10 was crossing the Unstrutt. He had only a single battalion of the T72ms but remembered well the Great Patriotic War history of every tank being a TIGER. To a logistician or an artillery officer, every T55 would become a T80 in the retelling. NATO relied heavily on responsive artillery and johnny on the spot resupply, and this brigade of 1st Armored would get none of that today; tomorrow was looking grim for the Amis, too.

I wonder if the 3rd Armee commander has read Napoleon?