3rd in a series of combats on the same table, in the same sector. The Americans counterattack 4th Motorisierte’s Verloren Haufe 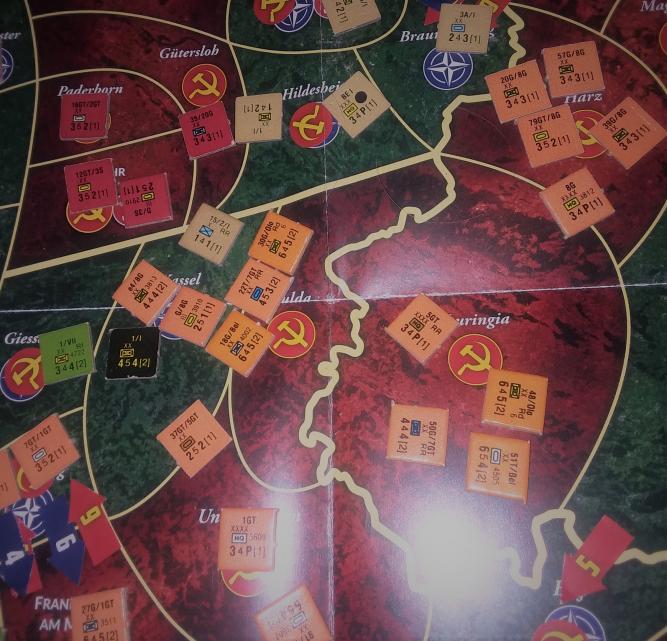 As the battles with Dave wound down, Fitzi showed up with his latest revision to the American list, including some awesomely painted M60 tanks. Al and Brusilov went off to fight another Brit vs Sov battle, so we squared off. By then the other tables were full with Flames players... 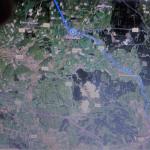 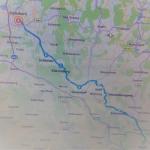 The strategic and operational picture is the same, save for American troops coming from the west to contest the new route between Paderborn and Kassel and points south east. Note that not only has this attack severed the southwest-northeast rail system to Hannover, it also has 'connected the dots' between Hof and Paderborn by rail for the PACT. A two-fer, as they say.

As last time we played I was the strategic attacker, Fitzi had the honors this time. He chose ATTACK and I chose MANEUVER (I was once an Engineer officer and have certain knowledge of minelaying, and putting them down in this operational situation is silly). Die roll gave us counterattack 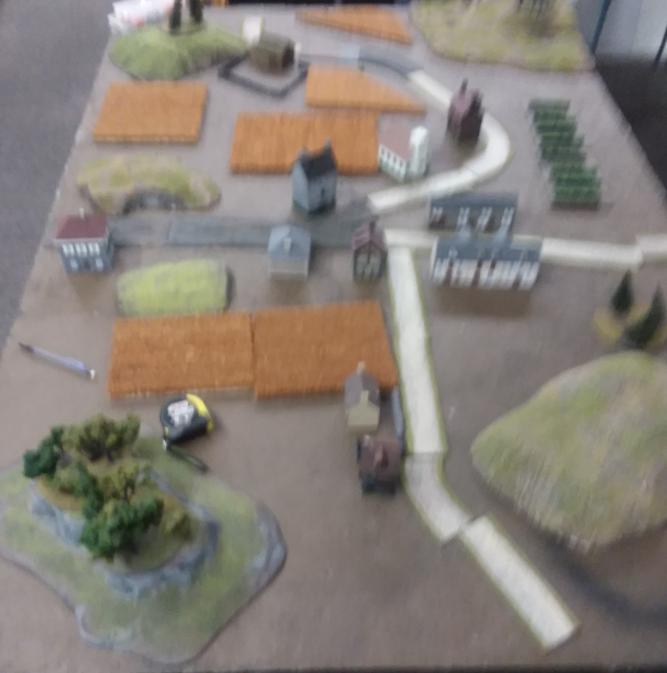 Lichtenau III terrain. I was defender in Counterattack. Fitzi tried for night, but got full daylight. Looking from east toward west

Oberst Niemand was impressed by the speed of the American advance. Apparently SACEUR was finally digesting the implications of the 4th's penetration. The Hinds reported a brigade, moving in two echelons, and its strongest part was turning southeast toward Warburg where 24th Regiment had finished mopping up. A battalion of the 22nd with its BMPs was moving to support. The Ami's were going to get an unpleasant surprise at Warburg, running into a well-planned antiarmor ambush with the 22nd's battalion maneuvering for a flank and the 24th's three battalions of Spigot launchers tearing apart the enemy M60s from the front. The Hinds reported only 12 Abrams present in the entire brigade. T55s and BMP-1s had been designed to counter the Ami M60, so that was bad news for the Amis. 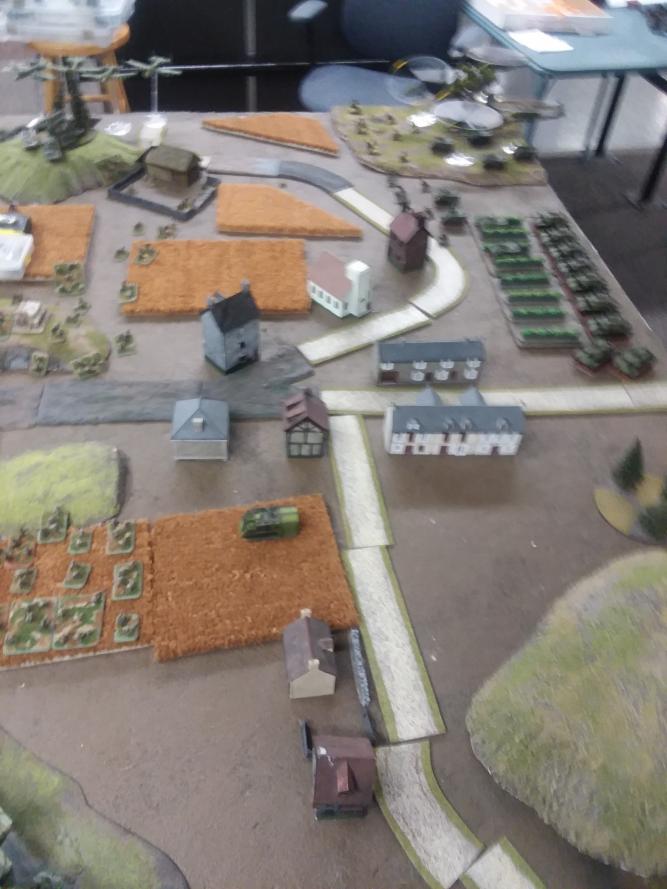 TF 3-8th's opening move - half the M60s dashed, half moved on stabilizers. Cobras firing missiles. Infantry remained dug in to watch results before stepping of to the assault

Fitzi got A10s on the first turn, and concentrated his fire on the BMPs on high ground to the west, allocating some fire to the BTRs. Fitzi has a lot of respect for BTRs as infantry killers as I made great use of them in the Red Thunder campaign. Moving the M60s on stabilizers reduced his to-hit number to 6 and he produced 1 with eight shots, missed with 4 TOWs on 5,6 and then bailed two BMPs and two BTRs, as well as killing 1 BTR. No morale checks. Miserable outcome. 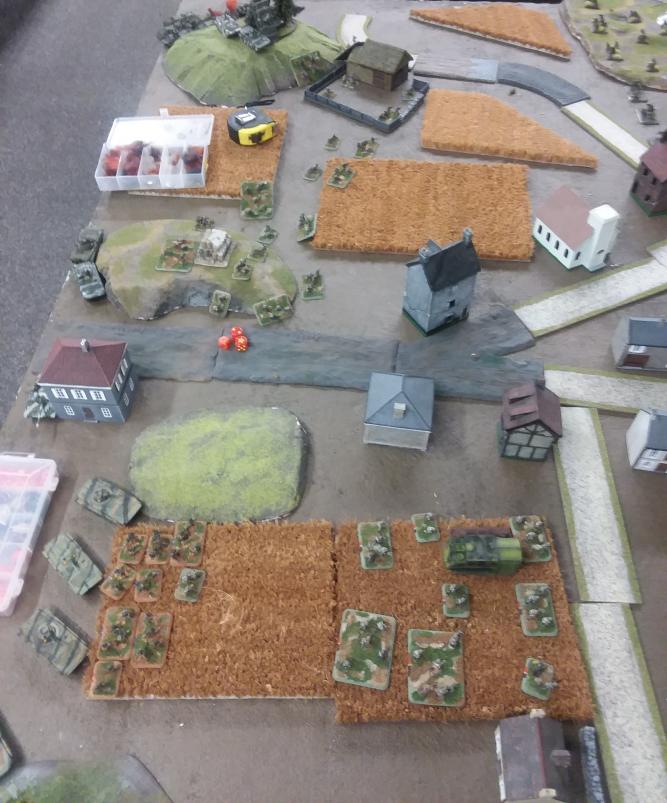 I advanced by No.1 BMP company preparatory to digging in on the objective, keeping the paratroopers in reserve, and brought my Hinds in (you'll see them in a minute, placing their 20" range over three M60s (a little optimistic, as it turned out). No VADs in this version of Fitzi's list, you see. 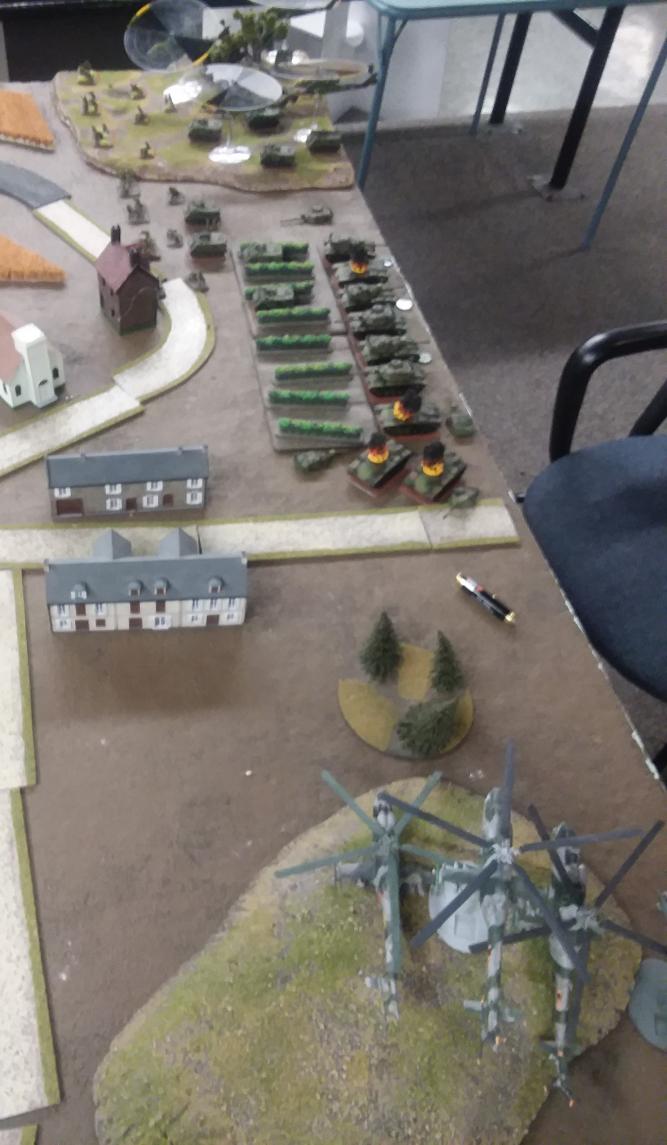 Apparently the DIS IACTA were having fun that night. My BMP-1s remounted. His M60s were positioned for a perfect storm of fire. Without deploying the BMP-2s from ambush, I cut loose with 5SAGGERS, 3 Spigots, 3 Spandrels and 4 Spirals (when the Hinds fired the only unbailed tank in range was the CO who missed). As all this stuff was on high ground, I was hitting 4s. 7 vehicles hit, all destroyed or bailed, including the commander, who failed his roll to jump tanks. Two units in bad spirits, no commander, M60s leave table.

Not surprisingly that stunned Fitzi. Part of the issue was a series of failed saves - his best roll was a 4, producing a test to bail, and in that series I didn't miss the firepowers. He couldn't save the Spirals and a 6 would have gotten him a firepower to bail against the Spandrels, but he didn't produce any.

So we went immediately to hot wash. 6-1, PACT

As Dessaix told Napoleon at Marengo, "This battle is lost, but there is time enough to win another."

Of course Dessaix was dead an hour later...

Fitzi explained his plan, which was basically a head fake against the eastern objective, followed by a reversal. I pointed out the outcome - his head fake had brought him in range of five ATGMs that he could have avoided (even 2 inches less movement takes the BMP-1s on that end of the table out of the picture) and his movement reduced the dice he threw against my western BMP-1s by 10, arguably two more hits, and a morale check. His force needed smoke, IMHO, and what they needed to do was put it down on the hilltop thereby taking my BMPs out of the equation for a turn. While they were covered in smoke, the M60s should be pushing forward to get within the 16 inch minimum range as the BMP-1s would only be dangerous with flank shots at that point, and to get them they would have to come down off the hill, requiring a double cross check.