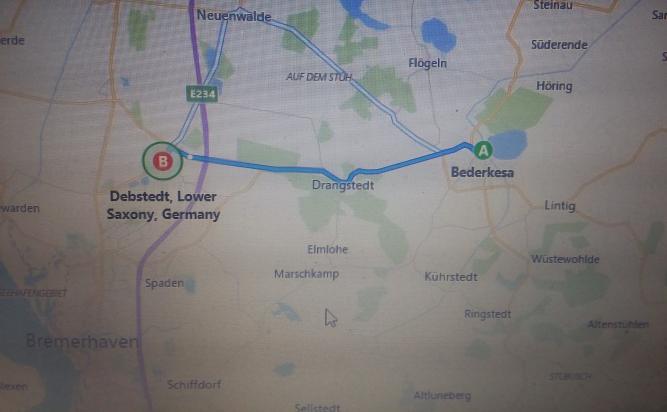 Combat Near Debstedt
Oberst Tomas Nadea watched the approaching NATO force from the top of a building in an industrial park. NATO’s operations officers had finally listened to their logisticians and were making an effort to secure a real port. Short of forcing 1st West Front to surrender, that wasn’t happening. The ports of Bremerhaven and Wilhelmshaven were securely in PACT hands at the moment, and Nadea’s screening force was shielding the 1st Motorisierte’s positions near Bremen. Fuel was an issue, so Nadea was letting the motley enemy Kamphgruppe come to him. The Marines who had been prominent in the fighting in this area had vanished, and now what looked like a mixed force of Chieftains and Leopards was moving against him. 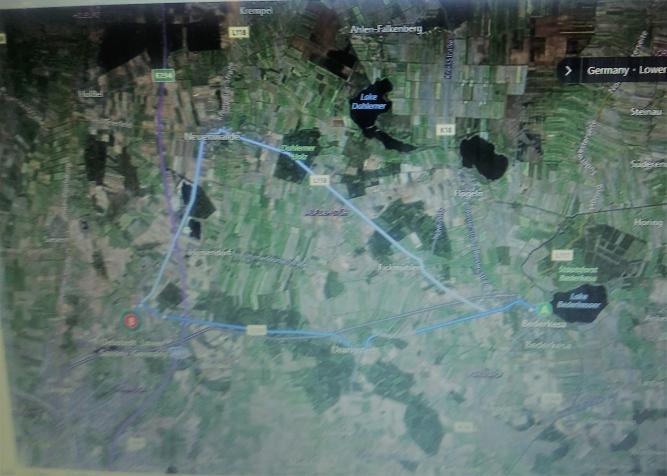 Debstedt sector overhead. The main body of the attacking kamphgruppe took the direct road while their reserves circled the flank 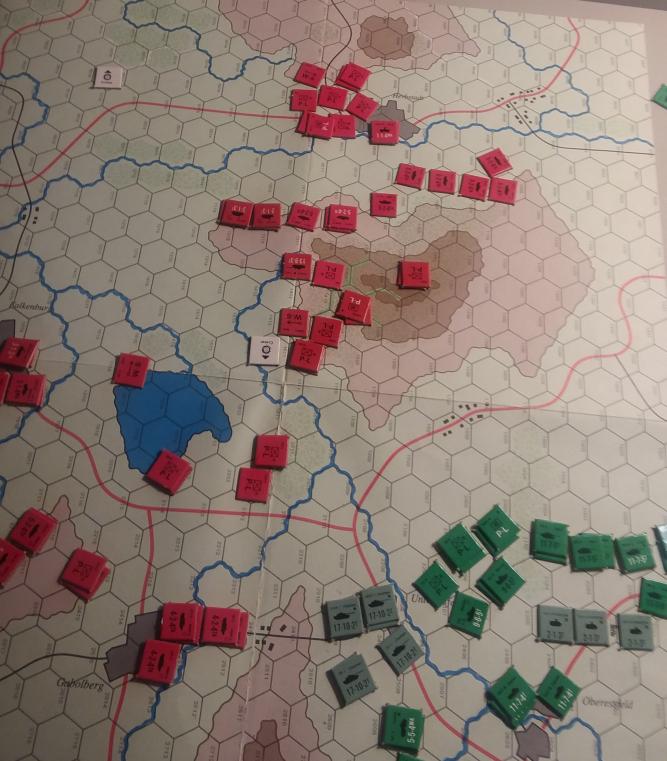 Setup at Debstedt. BH was determined to push an assault through to the middle objective, and placed his Chieftains and the German infantry there. He mounted a secondary attack around my left (northern) flank. North is in the top right corner of the map. My deployed force were three small rifle companies, one of which was designated to move on the other objective while two cluster around the objective BH place as close to his sector as possible. There transports were on the board with the BMP-2s forming the ambush. 4 flak zugs were there to deal with the Tornados, plus the Spandrels and two recon BMP outfits. BH sent a lonely Luchs platoon on the flanking maneuver. 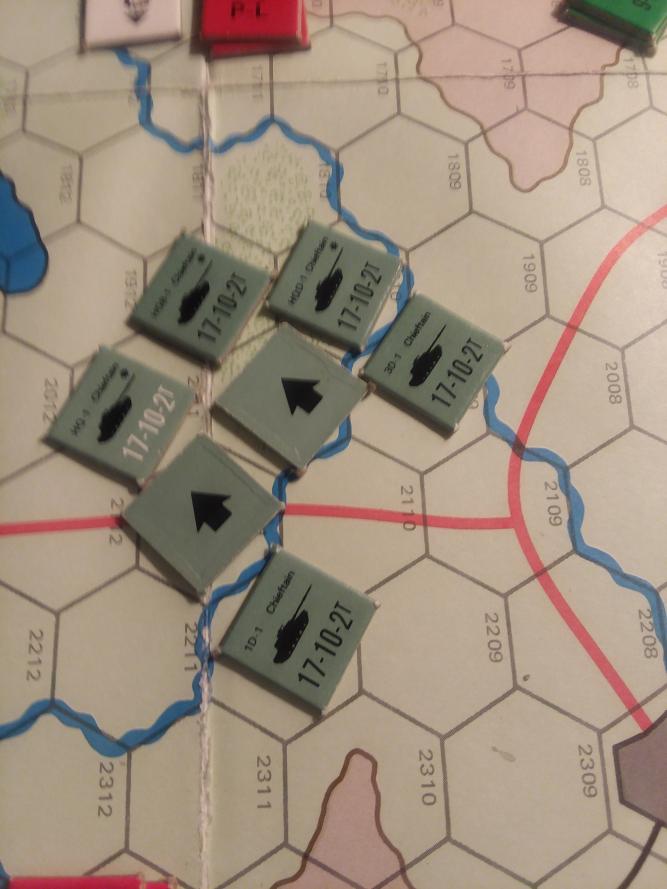 BH moved his Leos along the east map edge leaving the Chieftains and his infantry to carry the center. The Jagpanzers and Swingfires followed the Leos. The Luchs popped over the ridge to shoot down into the town. The result of BH's first assault. His Chieftains forded a creek and attacked my infantry sheltering BEYOND the woods. One of my RPGs amazingly bailed a Chieftain, and a cross check stopped another. Three of my BMP-1 infantry stands disappeared. This opened up access to the objective. On the right of the Chieftains, the Germany infantry did not do well, coming up against unpinned infantry shooting 9 dice at 5+ and 15 dice at 6+. Two stands died to 5 hits. His Luchs tried to remove my BMPs from contention but only caused one bail. 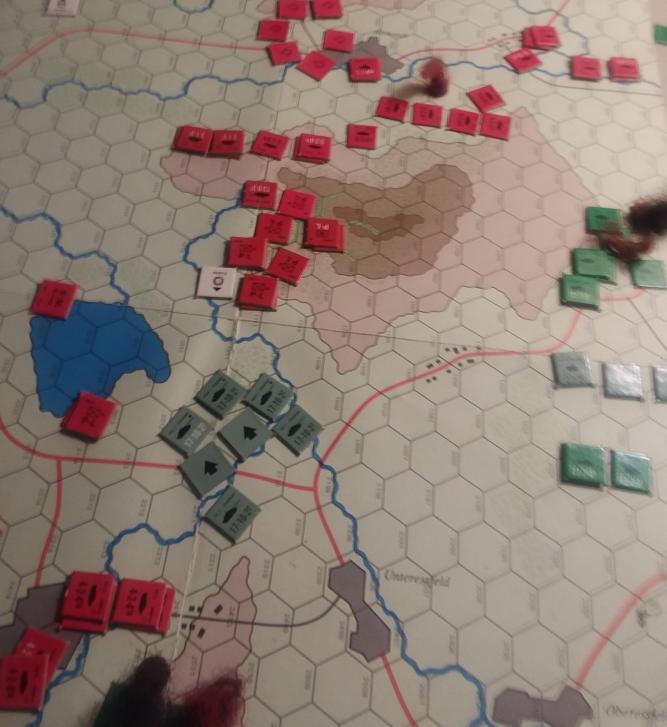 The big surprise of the first turn was his airstrike. I managed to mitigate it somewhat by shooting down two, fortunate that the ZSus rolled high enough to see them. He allocated it to the infantry force intended to protect the other objective, got 4 hits and pinned it while killing two. My response was made possible by the early arrival of a T64 platoon. I moved them to long range shooting positions, confident that they would cause damage to the Chieftains, as would the Spandrels hiding in the town near center court. Missiles and shells flew, no effect. Meanwhile, I opposed the advance of the Leo Is with my T64 commander and his BMP-2s emerging from ambush. 6 missiles and a 122mm round produced three hits, one of which turned out to be a permanently dead company commander, and one of which was a bail while the third was a dead Leo from 1st Platoon. My BMP1 transports allocated 3 dice to each Luchs spah and killed one in each, with the No.2 platoon exiting the table. Long range missiles from hull down BMP1 recon destroyed the Marder section which had climbed the hill to support the infantry assault, allowing me to fire up the hapless German infantry after bringing two more AK teams to the front of the woods. 15 dice at 5+ and 12 dice at 6+ vaporized the panzergrenadiers. Somehow that didn't make up for missing the Chieftains, but it was something. 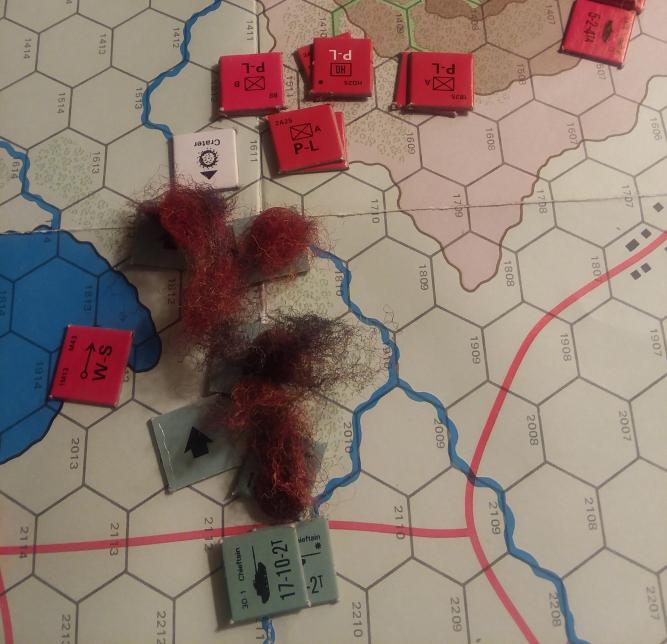 BH got the Tornados again, but wanted to get his Leos on the high ground overlooking my BMP2s. He sent the 2 planes to torment my T64s. This time the T64s themselves lucked out and brought down a plane. That gave him a -2 to hit, -1 more for night. He destroyed a Gopher launcher and bailed one T80. The unit then failed morale. 5 LeoIs managed 4 hits killing 3 BMP2s and bailing 1. Then he assaulted the ridge with the Chieftains, or rather, tried to. After working smoothly the first time, the terrain got the better of him. Each tank had to pass two, sometimes three, cross checks to make a contribution because his 1st turn assault had carried them across the stream and into the woods. That worked out to 17 crosschecks and produced 3 bogged tanks. Then defensive fire from 6 RPG7s produced 1 bailed tank as well. Survivable until his CO failed his second counterattack test with a '2'. So two tanks died. Fortunately the others had bogged out of reach of my infantry. In my turn, I got no reinforcements so my BMP1 transports from No.2 Company climbed up the ridge alongside his Leo Is and gunned down his Swingfire unit. They were too close to the Jaguars and thus forced the Jaguars to move. My surviving BMP-2s took out two more Leo Is. Long range fire from the T80s managed to kill a Chieftain, as did missiles from the Spandrel 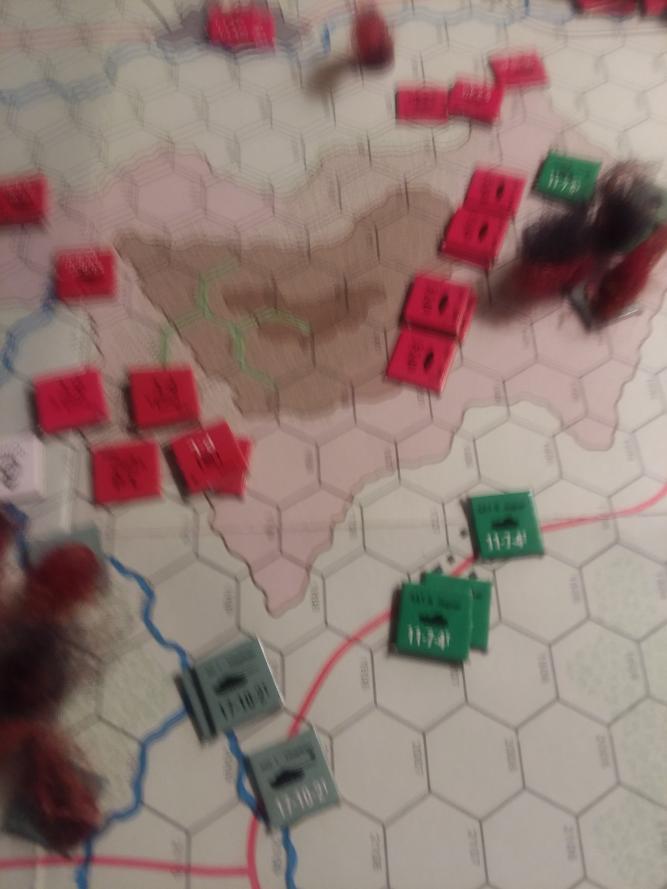 BH regrouped the surviving Chieftains and went after my infantry for the third time. This time he took the long way around and because they were actually closer to the bridge his survivors were able to attack, but not the CO. Meanwhile he pulled the Jaguars back, leaving the Leos to fight on the ridge. His third tank assault killed two my teams, but the infantry, assisted by my battalion commander hiding behind them, outlasted him. The Chieftains fell back. This time, they were not exposed to flanking fire from the west - trees in the way. He was in position to repeat as necessary, and as long as he didn't bog, there was little I could do about it. I automatically got a reinforcement and brought a T55 unit onto the western flank, preparing to go after the Chieftains. My BMP1s finally nailed the last Luchs; concealed gone to ground needing 7s is no mean trick. I choose to go to ground in the north with the BMP2s, needing another turn to set up the crossfire I wanted. This was not a success as you will see. 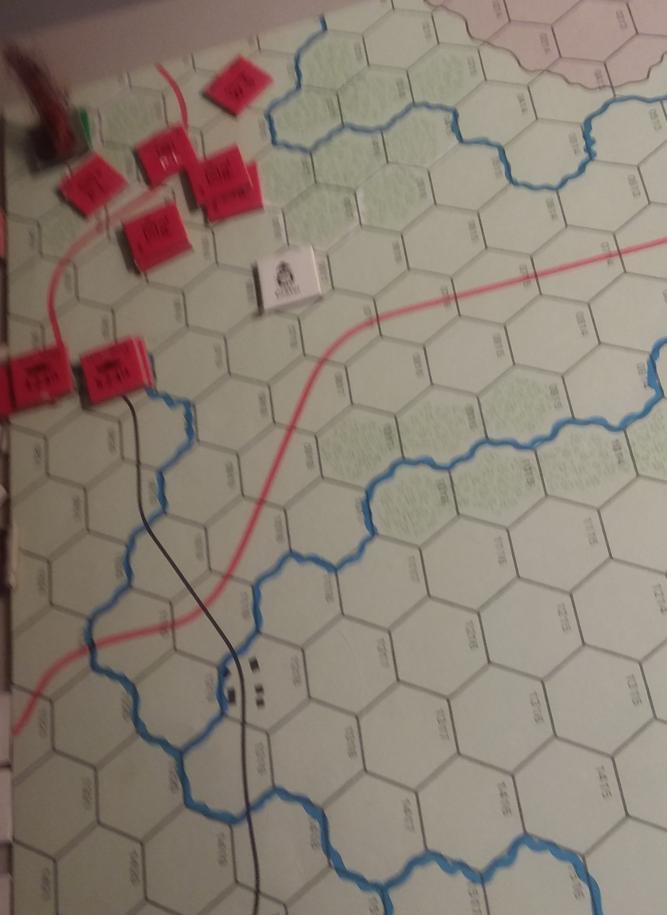 BH shot up my BMP2s and a BMP1 unit that was tossing low-odds shells at him, missing my T64 battalion commander. His lonely Luchs arrived and hid in a corner. He assaulted in the center, killed my two heavy weapons teams that had consolidated into foxholes I pulled back but he didn't accept the bait, correctly noting that the Chieftains on high ground would be vulnerable to fire from 6 AT21 weapons. Plus I had worked my ZSUs to a position where they could cost forward and flank him if he consolidated facing the threat from the southwest. 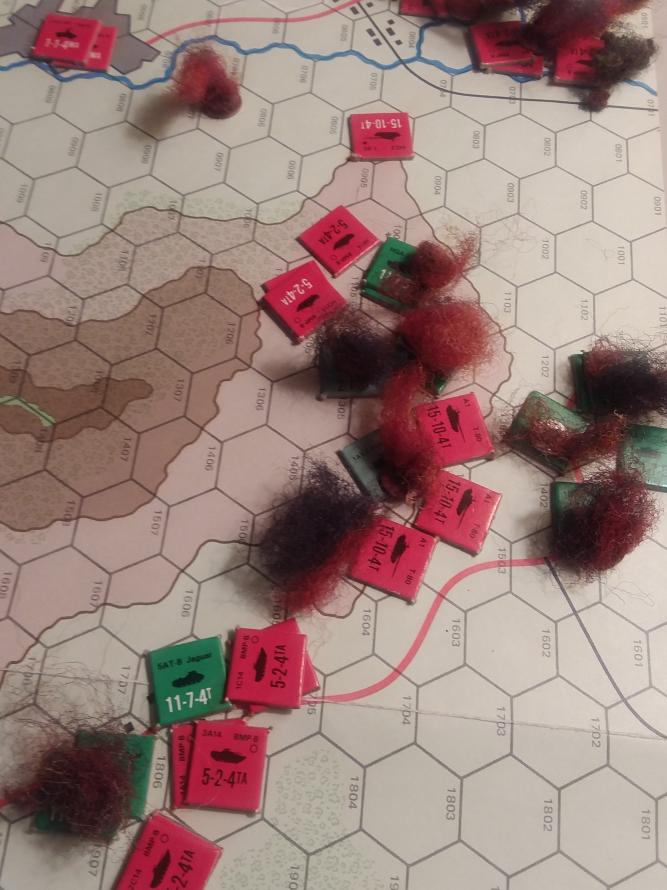 My T64s arrived on the north east flank, and cruised through a wrecked Leo to take position behind the Leos. It didn't matter for penetration but did for too-hit number. My infantry chased down the Luchs, as depicted in the earlier picture. BMP1 transport unit in the south blitzed to a high firing position and fired at the back of the Leo Is on the far ridge. NBMP1 transports in the north sector cruised down off the hill and jumped the Jaguars who had taken one long shot at a T64 to no effect. Dice fly and tanks die; one Leo I from 1st Zug, 1 dead two bailed from 2nd Zug; the Luchs spah executed, and finally the Jaguars lost two and one bailed. Now company commander, all units in bad spirits, game over.

Hotwash. BH probably lost this game when he got counterattack as a mission after choosing to have German panzer grenadiers instead of British infantry. Too few stands. I felt he took too many risks on 1+ cross checks, but he disagreed - he needed to control the objective before my massively superior firepower came to bear on the Chieftains from 360 degrees. Truthfully, if my BC hadn't been there to improve my counterattack number it probably would have worked.

1 Person Has Recommended bayankhan For a Commendation