E-battle. The 9th Czech Tank Division of Soviet 8th Guards Tank Army enters the fray. Western TVD has been begging for release of this force, and NATO finally triggers it. 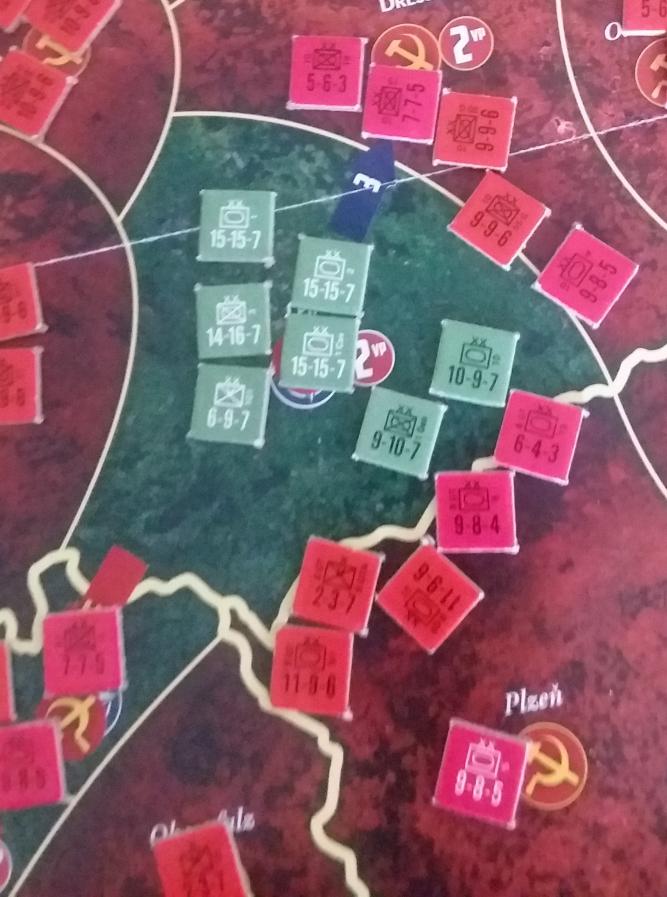 Grimma sector, the road between Leipzig and Dresden, where 8th Tank Army has been waiting for NATO to do something foolish. 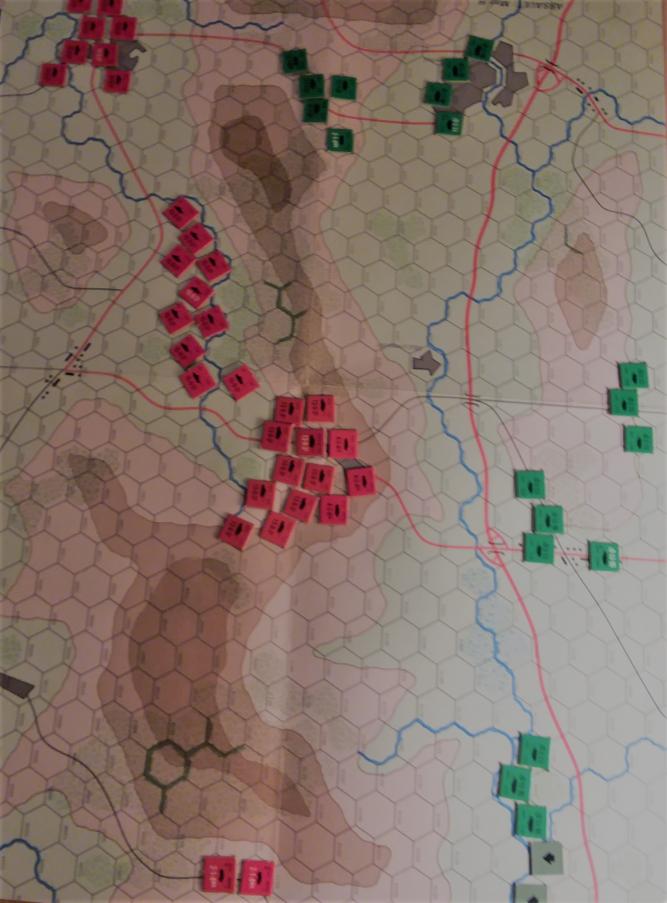 First turn at Grimma. 31 T55s with some BMPs and BRDMs facing 17 Leo Is and 4 Luchs. The Mulde Valley is off the bottom of the map, the battle running southeast to northwest. Scenario was Annihilation. Two Luchs bogged trying to cross a stream in the 'north' sector. I moved second to attack in center, sending two complete companies there, along with BMP1.

To answer a question that got posted while I was called away to gardening, this being the first decent day, the picture is turn one, not setup. The T55s in the center moved on spearheads then moved on their own to achieve positions shown, save on left (southern) flank 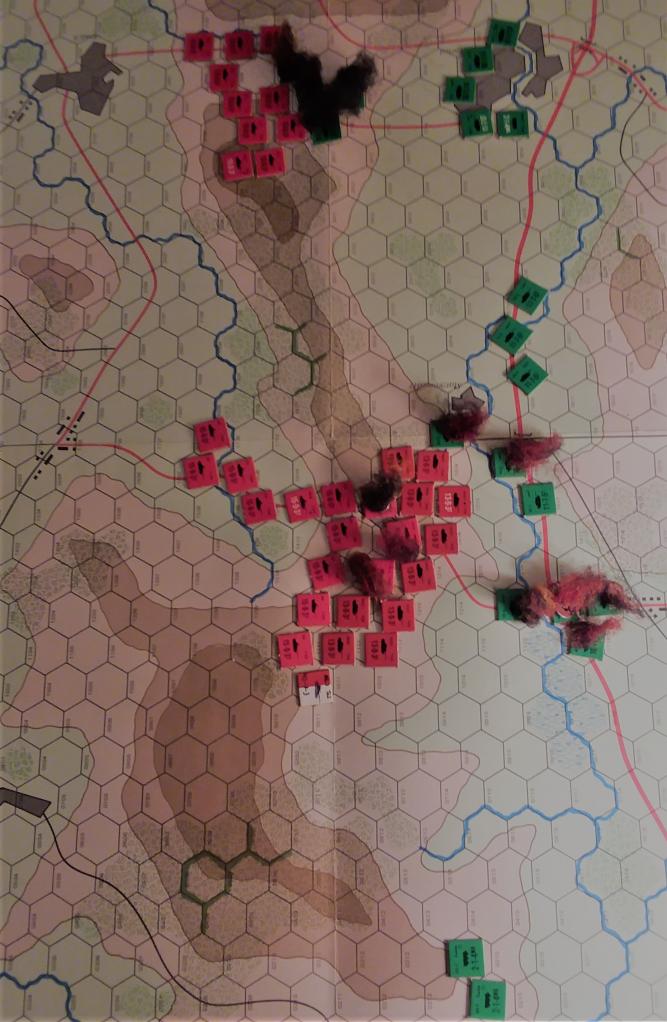 Grimma Turn 3. On turn 2 I knocked out his zug of Leo Is on the southern end of the ridge, thanks to a blitz move and then chugging forward to get a clean shot on one Leo. 3 shots at 5,6, 5 shots at 6 did for his platoon (2 5's out of the 5,6 and one 6 out of the others) and 12.7s did for one Luch. The other passed morale. In the center BH destroyed my BMP-1 recon unit and I retaliated by moving over the crest bringing a hail of fire down on his northern company. Then he broke off as many survivors as were moving to join the other company, shooting as he left the area at full speed, stabilizers add +1. 2 T55s also burned. His errant Luchs spah managed to get the drop on my BRDM2s, bailing both. At this point, 8 Leo Is are dead and I've lost 3 BMPs, 2 T55s, and 2 BRDMs. 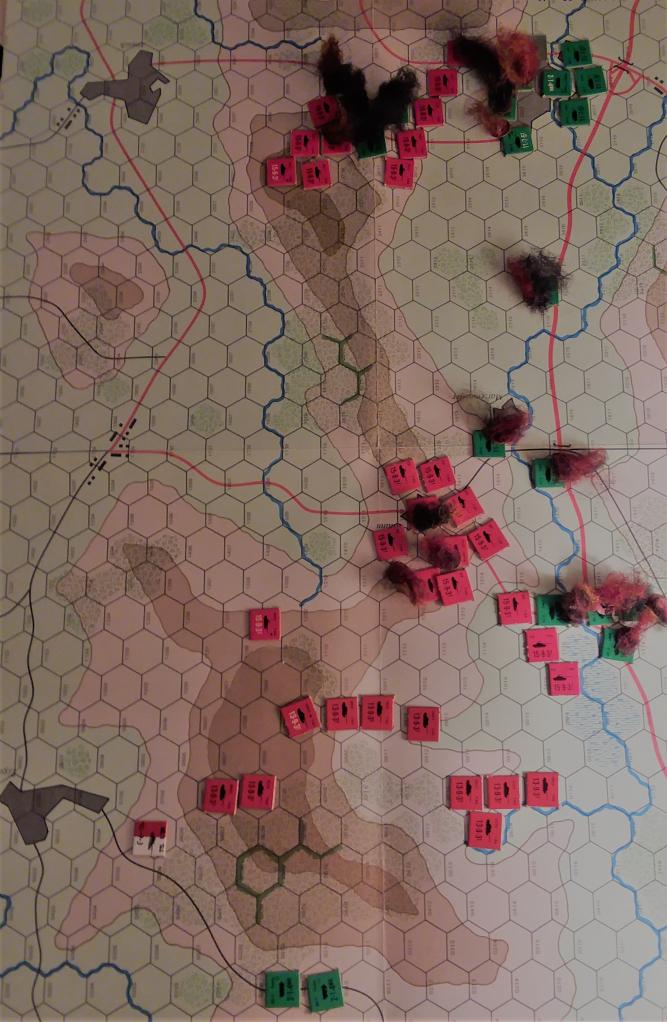 In the next phase I went after the survivors, who were holed up in the town on the southern (top) end of the map, whicle sending some tanks to contain and eventually destroy the two errant Luchs. I slipped the southern company over the ridge on stabilizers while firing long range from the ridge as my third company slid along the crest moving south. With 15-20 dice firing each turn, targets at 5's melted (the tail end Charlie from the escape from the center, and targets at 6 lived to a think about it again. BH now had all but one platoon of No.1 company on bad morale, and his 2nd company had two Luchs. It was time to shoot all he had left, at one target, and he did so, scoring 4 hits at 4+ and getting massacred in return. Lost 6 more T55s from different companies in these two turns, and when my return fire killed No.1 company commander he resigned rather than watch me chase two Luchs with T55s

Close up of Grimma sector, fighting taking place in the wooded hills west of the Mulde

Hot Wash - BH had the advantage of setting up several units after me, and decided to play conservative after I put 30 tanks in one end of the board. Since we've been playing, we've rarely seen 21 tanks dash but we did that game, and that upset BH's plan to use LeoIs superior tactical speed to reconcentrate. The rest was dice, and me getting the jump on attrition in the south set the tone.