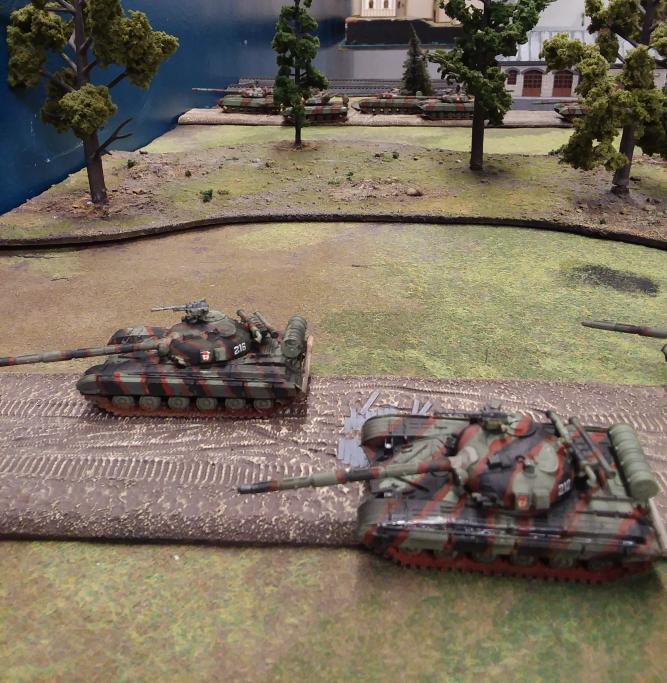 Pulkovnik Bayan Khan had not been surprised at the orders. Operation Seyber-Succop was stalling because they were at the tip of an unstable logistics trail and resources were being diverted to keep the line open. You could not run a successful operation on windfalls like his seizure of the Dutch supply dump; the fascisti had learned that to their sorrow not far from here as the crow flies.

The Dutch petrol had been fortunate in its own way; every vehicle in the brigade had begun the trip with extra fuel drums tied to the vehicles. The overcast skies had been perfect as well, limiting visibility of NATO aircraft. It was a pilot's keen eye that would have caught the 5th's movement but the low ceiling meant NATO's birdmen had to be under the layer for initial visual target acquisition, and that made them vulnerable to SA7 gunners riding alertly in the column. They had dropped a questing Alphajet just after the stop to switch out fuel barrels.

Now the movement was ending and the contact beginning. 5th Guards had returned to its old hunting grounds where they had shredded NATO armor like so much paper. The upper Ruhr lay behind them, ahead fresh enemies - US forces. 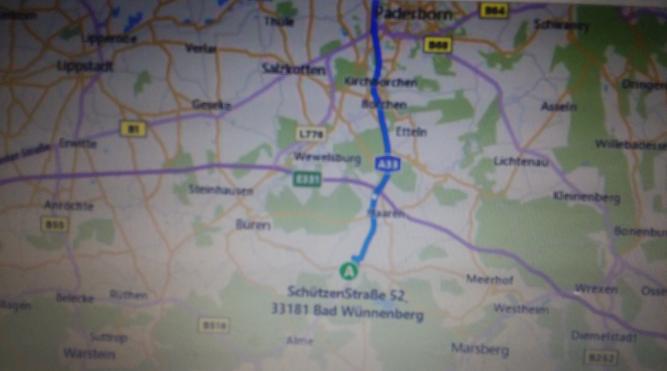 "Good to have you back, Khan, offered the Deputy Commander of 3rd Shock Army. "We need your force to push the Amis back west. They have those damnable 8" guns within reach of our new supply line and that has to change."

We played Ruhr Last Hurrah, as it seemed appropriate. I was attacker, BH deployed first after seeing my reserves. I took the BMP recon unit, a unit of 5 and a unit of 6 T55s, the BC, and the infantry company. 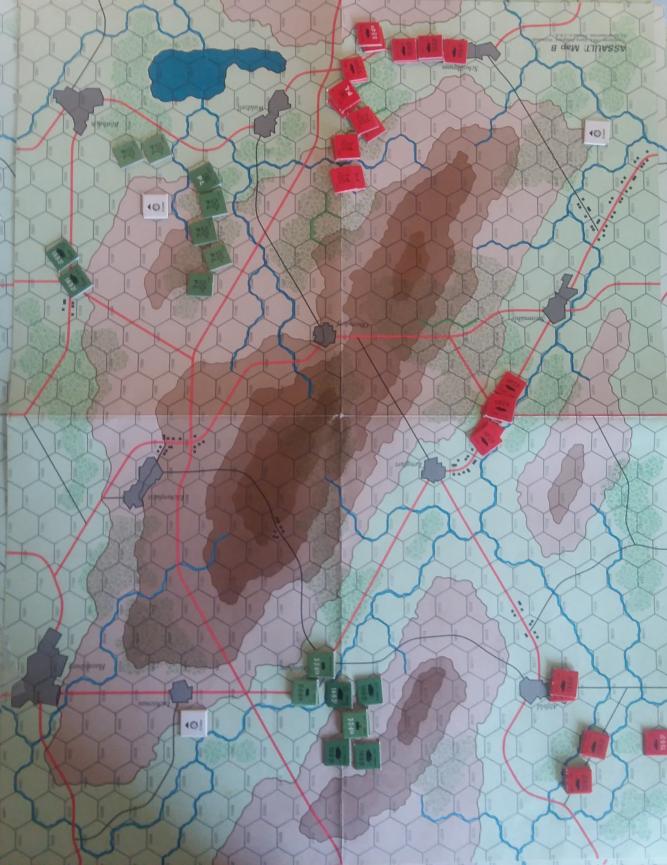 Complete Setup at Alme. Having kept an ambush, BH was finished deploying before I committed my infantry and my last T55 unit. The infantry and the T55 ended up on the northwest side of the the map, at top 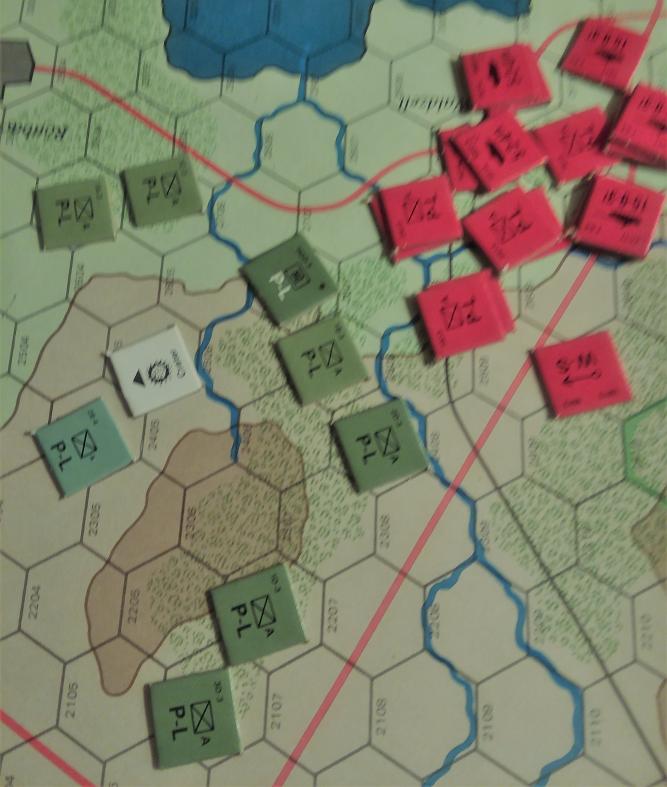 No reinforcements for me (becoming a pattern) so the southeast wing remained pat, hidden where BH couldn't get shots without using stabilizers and leaving himself in the open. Above is PACT move on the northwest end of the table. I pushed the infantry in to knifefighting distance, used follow me to get the T55s tucked in behind them, and moved the BMPs to where they could machinegun part of his platoon. Even though you can't tell the difference, there are codes on the counters we use to distinguish between SAW/LAW teams and Dragon teams. BH's semicircle had two rifle teams in front of my unit and one that could shoot defensive fire from a distance, and the rest were Dragons. 27 dice at 6's and 3 dice at 7's flew producing 6 hits, and one failed ave killed a SAW team. Pinned platoon 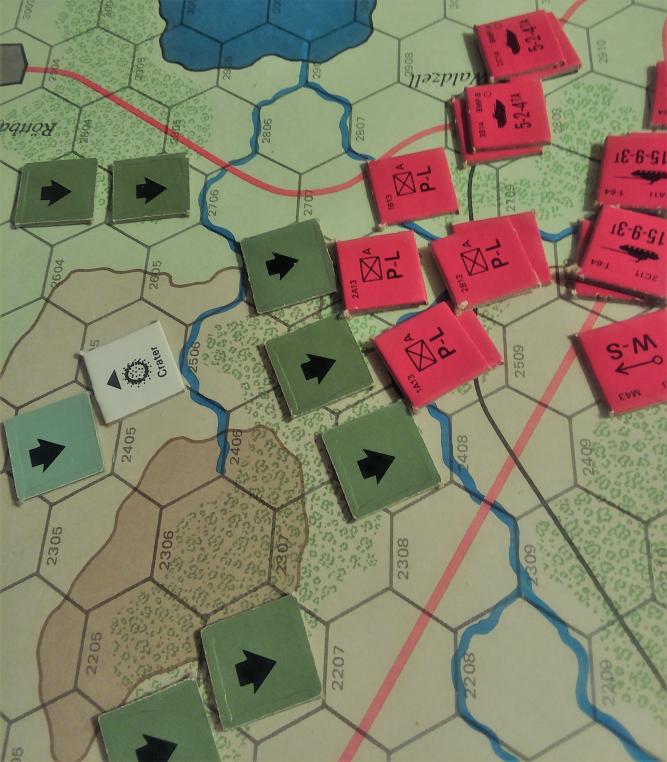 The Americans are flipped to indicate pins/bails. I went straight in. No defensive fire from Dragons, and 4 SAW dice did two hits and caused no casualties. My four rifle teams killed his Platoon leader and the platoon refused to counterattack. A likely result, even if totally unconnected die rolls.

The helmets might be different but you get the idea 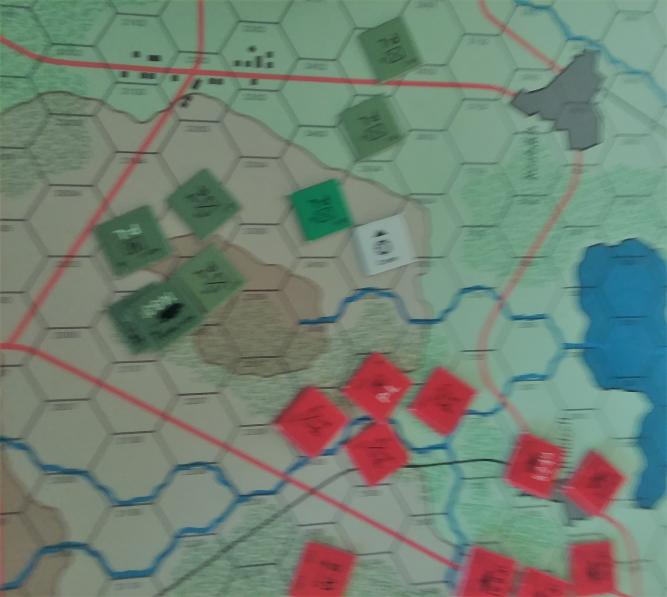 BH was pushed back outside of my consolidation distance, putting him in the open and me at the edge of the woods. No reinforcements. BH could commit his ambush to this flank, but instead decided to wait on reinforcements and sent the ambush to support his other flank and launch an attack. As he wrote later, he could try to win, or try to not lose. His sending another platoon to support the right flank had the benefit of keeping my BMP transport unit pinned at center court, so it wasn't completely bad. BMP1s are pretty nasty when they flank M60s, and he knew I was keeping them uncommitted in the center for exactly that reason. His southeast flank force stayed hidden, as he wanted to strike with power, so no action there. He did move his company HQ to cover the road my T55s were using, and that kept him from shooting my infantry. Without adequate fire support to reliably pin my infantry he chose to dig in after unpinning. That reduced his offensive dice to 4 and he missed both hits. The Dragons did not have line of sight to any vehicles after the push back 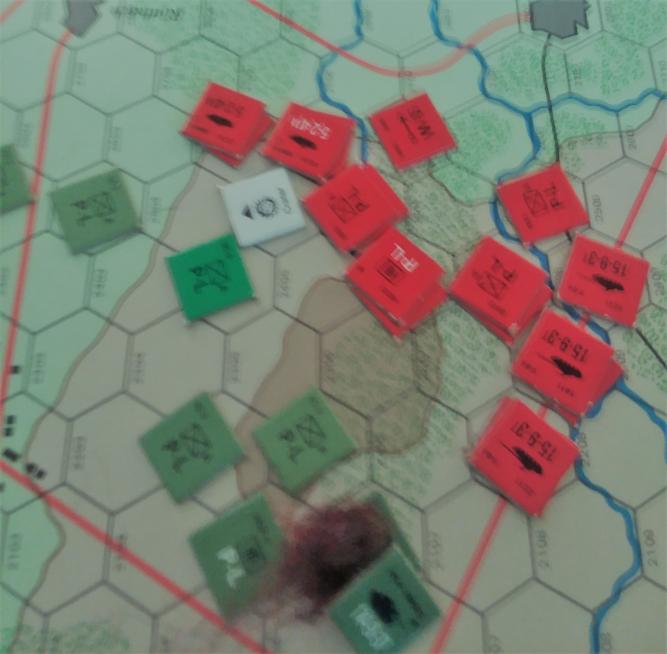 No reinforcements again. Is anyone out there surprised? So once again, no activity on the southeast flank. BMPs in center now absolutely required to support there. The first turn hadn't cost me a stand, so my intact platoon exectured 'RINSE and REPEAT. Again the narrow column emerging from the woods, with lots of fire support, and this time hitting 5+. The RPGs shot the M60s, missing (they were 6+) but my T55s cruised down the road and managed one hit, killing the XO. The prep fire for the assault took out a Dragon stand. 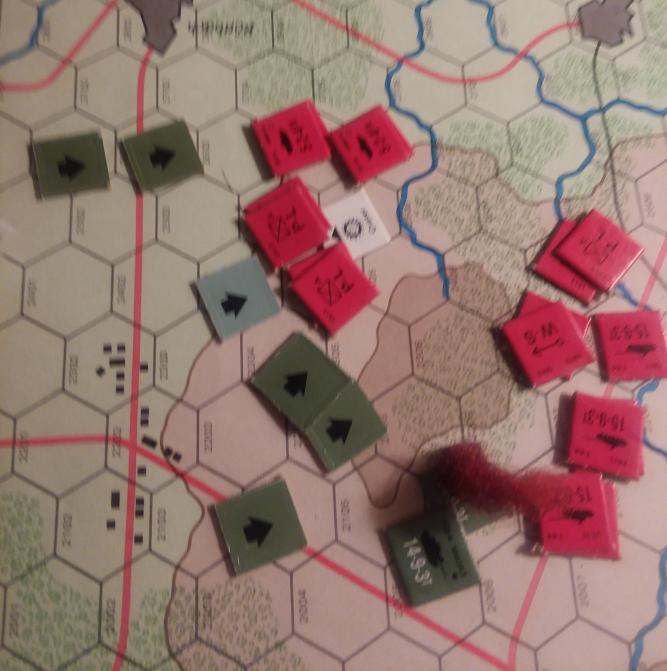 Second assault. 4 dice produced two hits and one dead stand. With no bailed tank to savage, the RPGs sat this one out. 3 dice hitting 5+ killed another SAW stand, and despite the Company commander being in reach, the platoon fell back again. 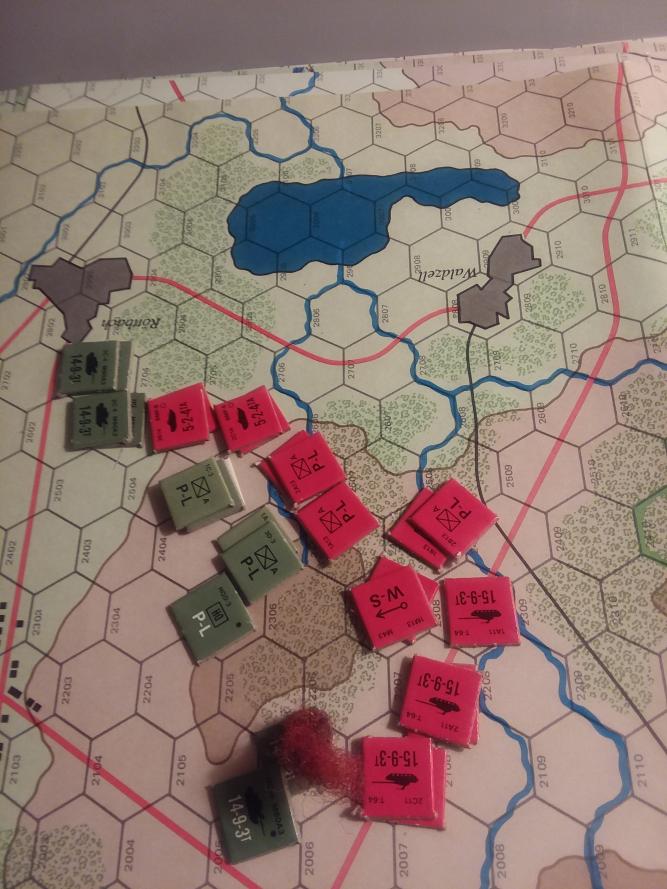 I consolidated back into the woods. BH needed to push two platoons away from the objective, but first he needed to unpin the infantry -done. Then he needed to pin my infantry, but he also needed to get reinforcements where he needed them - done. 4 M60s roared onto the board. Next he needed to pin my infantry. Not done. 3 dice from the infantry and 6 dice from the M60s provided enough theoretical firepower, and he had to do something about the BMPs or their MG fire was going to gut the assault anyway. The CO's tank had to drive out of its woods position into the open to have any chance at an assault, but leaving a lane for it would cut the assaulting teams from 5 to 3. Given that 3 teams in the assault were Dragons, he was not prepared to do that, so the command tank took a shot at my T55s of which one bounced and the other killed. His M60s killed two BMPs with 4 shots, and managed only 2 hits on my infantry, both saved. His latest platoon leader, the third if you are counting them as they go by, got two hits and one failed save took out an RPG team. 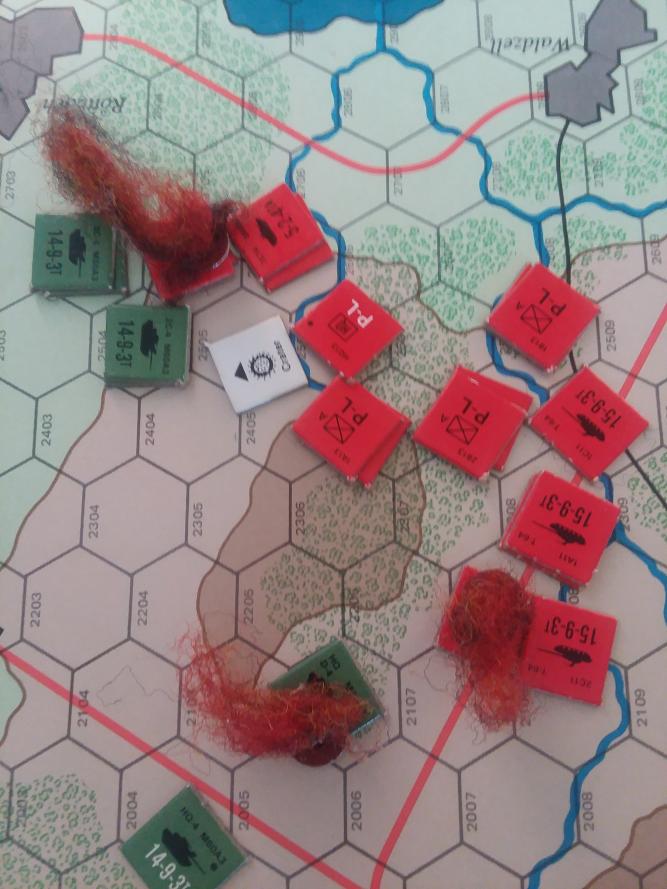 Defensive fire was devastating. 6 dice from the BMPs, plus 9 dice from the AK teams, and 11 more dice hitting 5+ from the AGL-17 and RPGs caused 11 hits resulting in 5 failed saves. Scratch one platoon. Also its M113s which were hot footing it join this fight from the southeast flank where they had been intended to deal with my BMPs at close range. Meanwhile BH advanced 8 M60s but without using stabilizers and taking several cross checks, only managed to put four rounds into my T55s, killing one and bailing another. 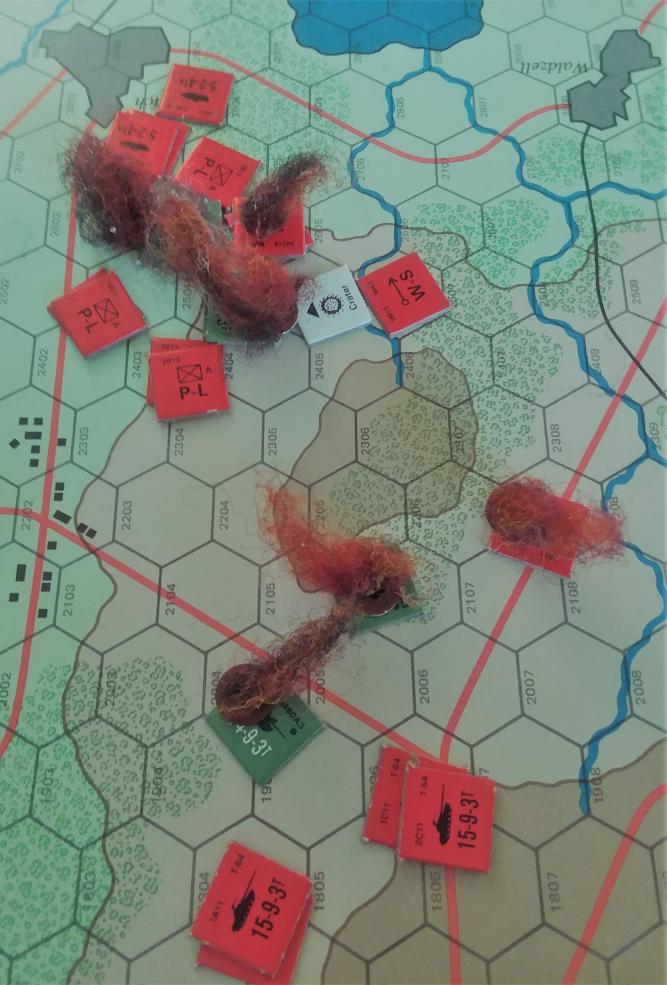 I sent my infantry and the two surviving BMPs after the 4 M60s, moving the 6 RPG-equipped stands to flanking positions, as well as the BMPs, leaving the AGL to contest the objective in case of disaster. Objective - bail three tanks and wipe the unit out by surrounding it in an assault. My 4 T55s drifted down the road, rolling 3 dice at 6 and one at 5+ to hit the commaner. Dead command tank. BMPs killed one M60 and the RPG fire storm managed 3 more hits, all bails, game over. 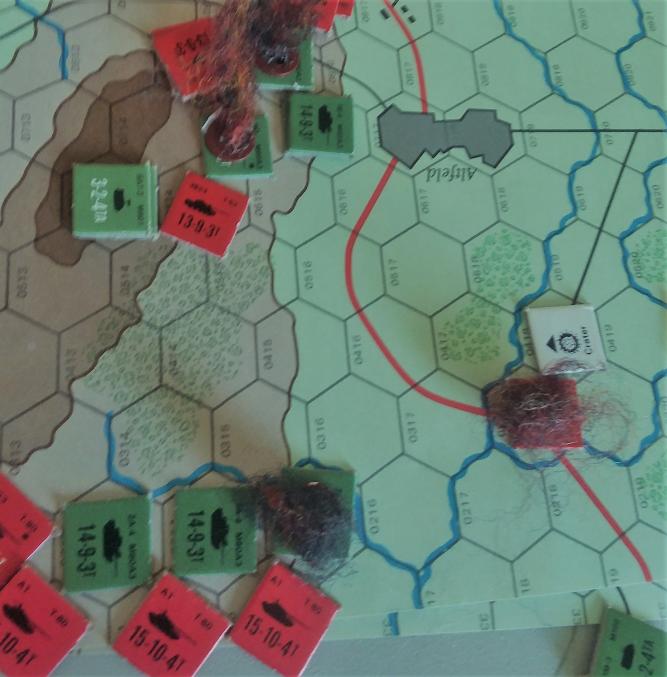 Now, to the southeast. This is not kicking someone when he's down, but programmed in the spreadsheet we exchanged. I got reinforcements, finally (it's a rule) and went after the 8 M60s, leaving my T55 BC to hold the objective. What was going to happen next is impossible to say, as obviously the M60s took some casualties, but did not go on bad spirits. Some I'm guessing a major effort to kill my 4 T64s, and with numerous dice from flanks, likely to work. As it was he lost 3 M60s to my fire. Strangley the T55 conscripts outperformed my 'veteran' T64s. Go figure.

Hot wash. Like BH said, he tried to win instead of not lose. Unfortunately his tempo was off by one turn. If he commits the ambush to the northwestern flank, he can counterattack in his turn 1, instead of waiting to turn 2. But he still has BMPs to deal with and that would have diluted his firepower, leaving him with 6 dice from the infantry and possibly 6 dice from the command group. Fair odds, but not decisive, and even pinned the infantry develop 7 dice at 5+ and 3 at 6+ and 3 dice for each surviving BMP. A two-stand attack cuts the BMPs out of defensive fire, but I've seen two stand attacks fail to 4 hits when the saves don't come in.

So where was the error? In this case I see two things. The first was keeping an ambush. Having the unit off the table is awesome defensively. But having two units in the spearhead meant a Game Turn 1 attack that kills a T55, and then 6 surviving T55s and 4 BMPs dealing with 8 M60s in a close range duel. I don't like those odds. He probably would have won on turn 2 when no reinforcements showed up.

The other was using the M113s like an independent unit. A lot of people do that. But unless you keep them close, the American infantry platoon's potentially weak fire power (if pinned and spread out) will hurt you. I would have had to wreck the M113s before any assault was possible, and that buys tempo

Aftermath Pulkovnik Khan surveyed the site of the fight. Two T55s lost for 9 M60s. The new 4th Battalion, formed from conscripts and reservists to replace tanks lost last campaign, had proved its worth. But the infantry had won the battle. His old veterans had been overconfident, and only the abrupt retreat of 5 M60s at speed under a smoke barrage had prevented him from losing critical T64s. He would have to have a talk with the 1st Battalion commander. Even M60s could be lethal to T64Bs. Meanwhile 2nd Battalion had caught another enemy heavy company team on the march and smashed it, and the enemy brigade was withdrawing. He needed to hustle them back another 10 kilometers and get into their artillery area to protect the new supply line.