A quite, peaceful evening in the Adepticon section of the Hof Corridor has been brutally disturbed by a Hasty Soviet attack! The British commander, taken off guard by the sudden appearance of Soviet infantry and support assets, grabbed the radio to call in immediate air support (spilling his tea in the process).
Unfortunately for the Harrier pilots, the request did not include any report on enemy anti-aircraft defenses. After 8 SA-9 missiles and 24 shots from Shilkas, the 4 brave Harrier pilots drifted listlessly from their shoots.
The Soviet infantry continues forward on both flanks and straight down the middle of the front. Unable to call forward any reserves, the Chieftains holding the British right flank were pushed off the objective by assaulting infantry resulting in a 6-1 Soviet victory.
It is so foolish for the Capitalists to think they can resist our mighty Soviet Armies! 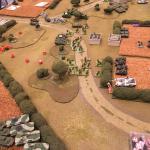 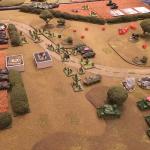 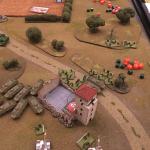