In search of Frankfurters

The search of the legend

Since the end of the great Patriotic war (the last one, not this one), Soviet Veterans spoke with disdain and contempt with all things German save Frankfurters. Amazing delicacies made by the Germans. All the children they told of this amazing culinary delight were now all men in the Soviet military and the men under Alexei were no exception.

Logically, Frankfurt should have the best

After speaking to his Commissar and considering punishing a conscript for leaving his weapon unattended(execution being the punishment for such at the frontline), Alexei considered once more how to raise morale. Constant miscommunications, moving battlelines, constant fighting.... could he really blame a conscript who by definition didn't want to be here?

He mulled it over and decided that since the Division was going to get pushed back into Frankfurt anyway, why not tell the men they would find some of those legenedary frankfurters their grandfathers feasted on in Berlin in 1945! The best of such must be in its Namesake!

With the entire rumbling of the battalion and the hunger that fueled it, the battalion had found that it had broken through the enemy line and the enemy was on the verge of a counterattack. Alexei got his krasnapols into a hidden clearing and prepared for the fight. A two pronged fight seemed to be to his benefit when he suddenly recieved reports that the West Germans holding the sector had no infantry with them. This joyous report was soon followed by a clarification that they had no german infantry, but instead had a British company with them. 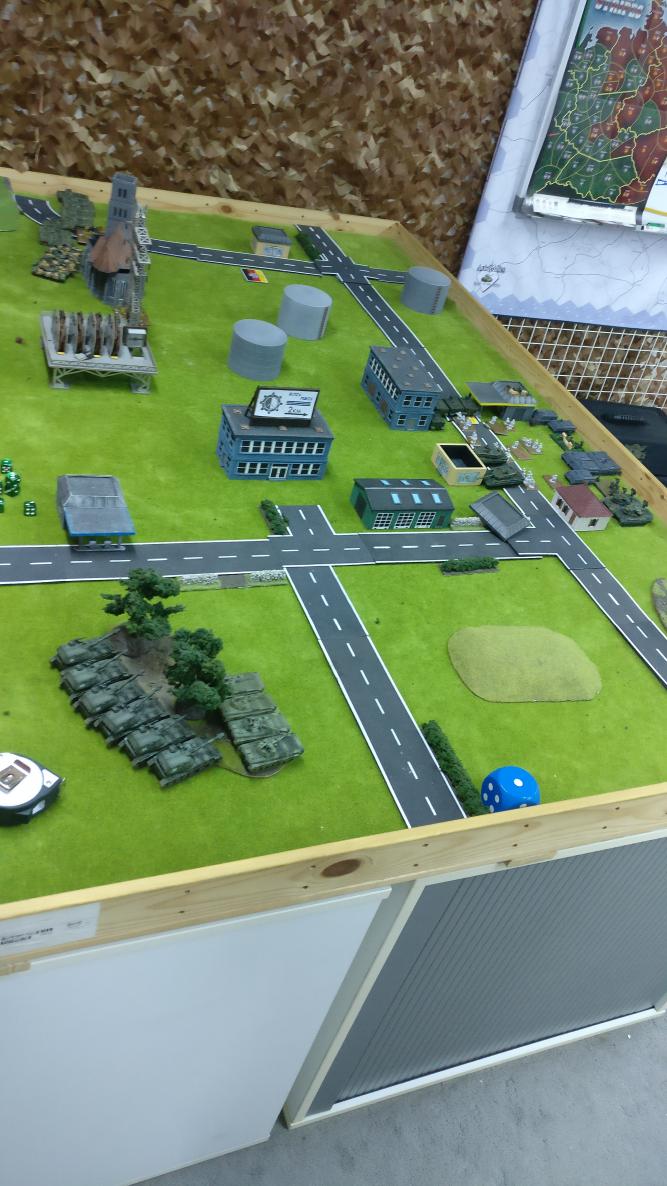 Turn 1 started with the usual fanfare, Nato trying to hide their stuff and BMP2 knocking out whatever isn't hidden. We managed to kill 3 infantry stands and 1 Leopard 2. He got reserves in and decided to bring the Lars on and dashed them to the "Safe" side of the board. My ensuing artillery bombardment caused some Killed one of these Lars. Nato went first so alot of shots were going off with him not benefiting from GTG. BMP2s also knocked out a platoon of FV432s and 3/5 for the other FV432 platoon.

Alexei couldn't believe his luck, He had managed to catch a West German force again! He hated fighting the West germans as they were fighting for the same reason that the Soviets were, to Defend their homes and families. The British, Americans, Dutch, French were here as a matter of nipping a problem in the bud and fighting on someone elses turf is cheaper than your own. 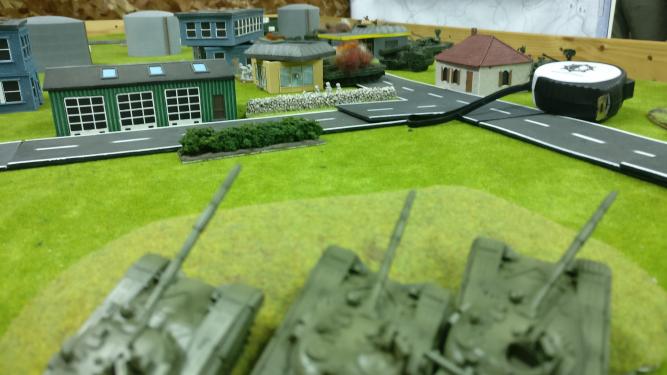 Alexei ordered his T-64s forward to tak out the Leo2s hiding behind some miniature store. Killing one Leopard 2, the T-64s celebrated victory before the return fire came thundering back. Milans from the woods opened up on them and managed to bail two tanks. 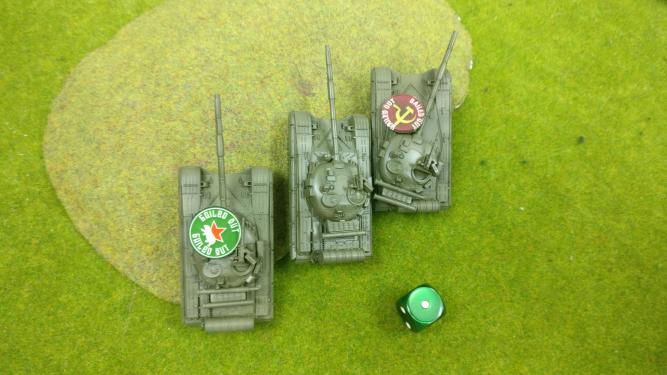 The odds didn;'t line up for me. Two bails and i roll a 1 on Platoon morale. 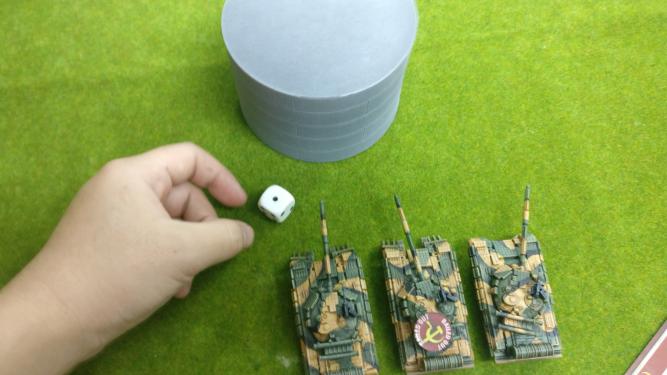 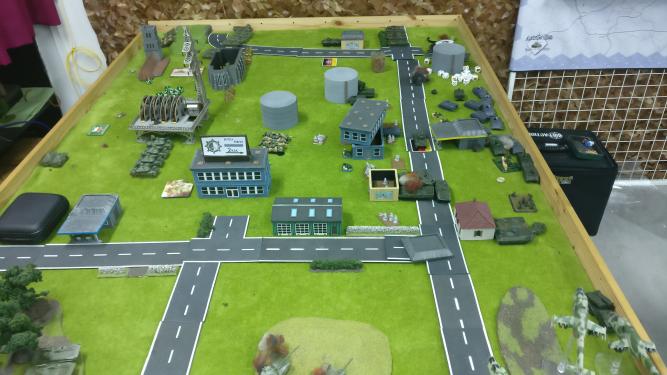 Alexei had lost one platoon of Tanks on the Eastern Flank, his Shilkas had arrived onto the battle just in time to be blown to bits by overzealous Milan teams. The West Germans were taking a beating with their Leopard 1s arriving and then being smashed to bits by BMP2 spandrel missiles. The Leo2 was finally destroyed by t-64s. Krasnapols were constantly lobbing shots in light vehicles that were quick learning to fear these Artillery pieces.

Alexei knew that even with all these successes, he wouldn't be able to force the British to retreat, they were a stubborn bunch. 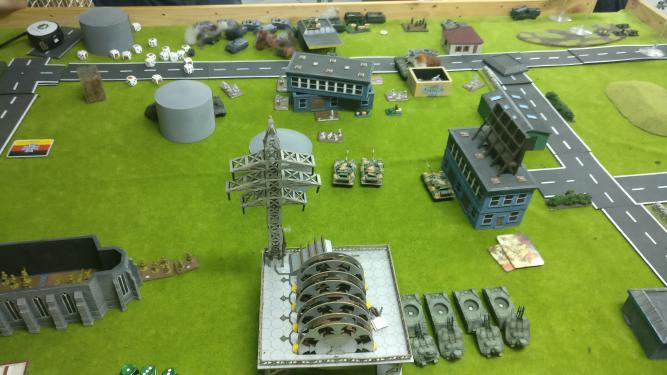 It suddenly dawned on Alexei that the synergy of NATO that worked so well could also be its downfall! He didn't have to beat the British, this was German land and therefore if he pushed the Germans too far to breaking, the Birtish would be forced to retreat as well (British is an allied formation). Alexei then pulled rank over the radio waves to force a group of hinds to make a strafing run on the German Commander.

I used the Hinds to fire at his commander and a Luch killing the commander and putting the Luch into bad spirits. I then used the T-64s to fire onto the filgerfausts who just fired and thus are no longer GTG. This let me hit them on 5s instead of 6s if GTG. I hit twice and the brutal 125 mm gun did their work. HE had no CinC and no unit in good spirits and so had to quit the field. It was a pretty bad blood bath but the game was pretty fun. His luck was terrible.